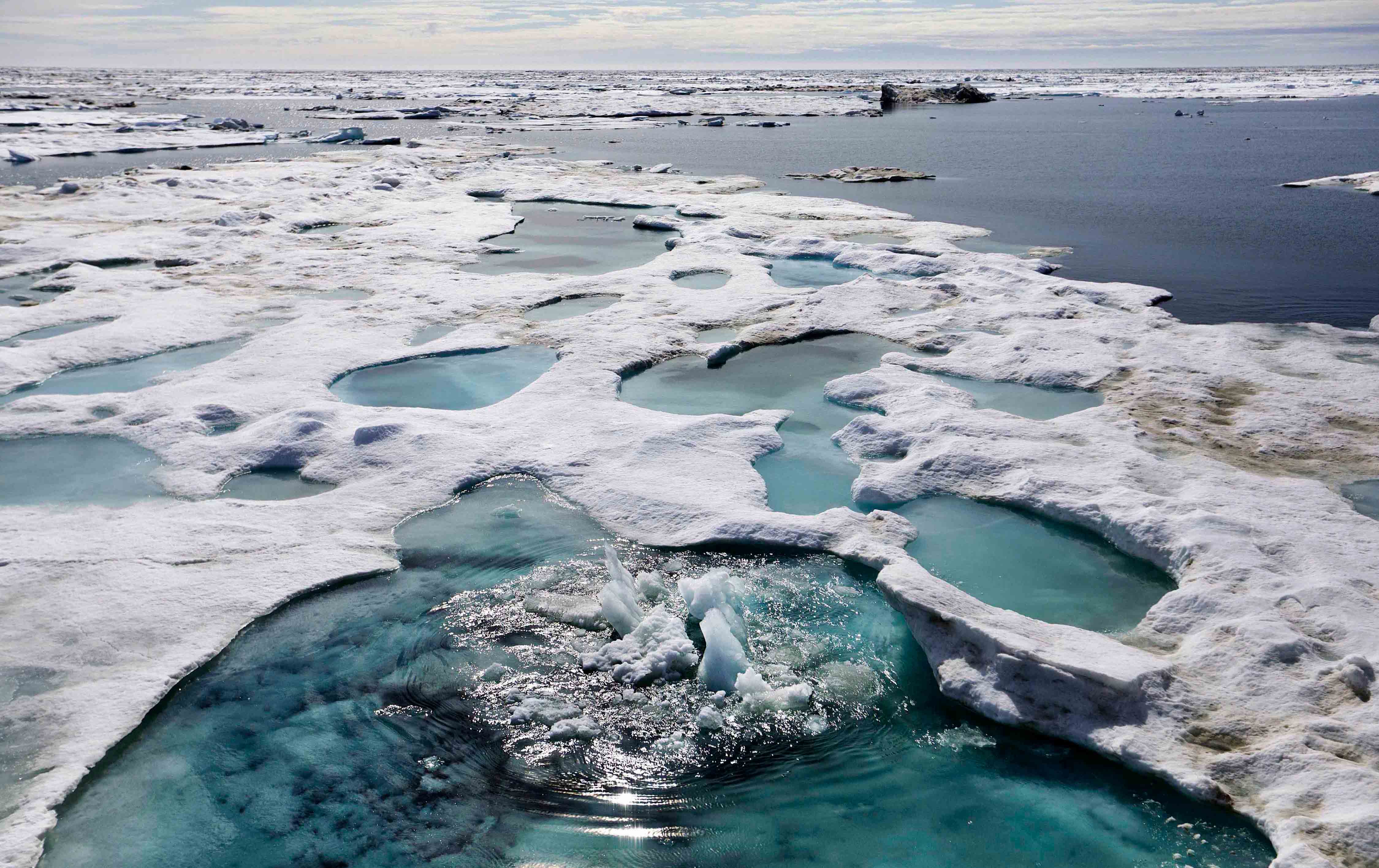 Ice broken up in the Beaufort Sea off the coast of Alaska, a magnet for nations wanting to exploit the Arctic’s rich oil reserves. (AP Photo / David Goldman)

On September 8, Alaskans in Anchorage, Homer, and Juneau joined climate activists across the country in rallies supporting the upcoming Climate Global Action Summit in San Francisco. Activists and speakers—including myself, as well as Fran Ulmer, chair of the US Arctic Research Commission and former lieutenant governor of Alaska—called citizens to action, highlighting the here-and-now climate impacts the state faces as it heats up at twice the rate of any other in the country.

President Trump, Senator Dan Sullivan, and Governor Bill Walker claim that opening the Arctic National Wildlife Refuge to oil development is part of making America energy-dominant in the world. Regardless of where you fall in the debate over opening the refuge, oil-and-gas reliance is not the path to making America energy-dominant. With solar and wind power now cheaper than gas and coal in many parts of the country (and the world), the marketplace is rapidly shifting away from fossil fuels. Five countries, including China and India, are looking to ban the internal-combustion engine by 2040. What China did to fuel the boom in photovoltaics it now wants to do with electric vehicles. More than 40 countries place a price on carbon. As demonstrated by China, Germany, France, the path to energy dominance lies with the clean-energy economy.

There’s an adage (often attributed to Saudi oil minister Ahmed Zaki Yamani): “The Stone Age did not end for lack of stones, and the Oil Age will end long before the world runs out of oil.” The Oil Age is clearly giving way to the clean-energy economy. Yet our state leaders want to hitch Alaska’s future to a dubious resurgence in oil.

The $60 billion Alaska Permanent Fund could be sustainably tapped to fund state government—the first step in moving beyond oil. Alaska’s economy has diversified since the oil-pipeline boom that started in the 1970s. Its seafood industry is now considered the superpower of sustainable seafood. The construction trade is strong, with a positive outlook for growth. We now have a health-care industry and an air-cargo industry where there once were none.

As a former elected official and engaged resource professional, I’ve stayed close to economic developments during my 41 years here. The Alaska I know and love has more than one economic driver. For many regions of the state, it’s tourism, considering we now have over 2 million visitors a year. And let’s not forget: We were founded on fish—our largest employer when we achieved statehood in 1959, and a principal driver to this day. We are so much more than oil, and we can move into the clean-energy economy with the rest of the world. We don’t have to be left behind.

Perhaps Alaska’s biggest opportunity in the clean-energy economy lies with our wealth of renewable energy and our vast experience running microgrids all over the state’s rural expanses. Wind-diesel hybrid systems across the state displace tens of thousands of gallons of expensive diesel every year. Because much of the developing world is not connected to major energy grids, Alaska’s microgrid expertise could be exported. The microgrid industry is estimated to be worth $20 billion by 2020.

According to the Alaska Center for Energy and Power, “Geothermal, wind, tidal, wave, hydro and even solar and biomass resources have the theoretical potential to not only meet the majority of Alaska’s in-state energy needs, but also provide tremendous economic and strategic opportunities for the State and the Nation.”

Alaska must engage with neighboring Pacific Northwest states and Canada. The clean-energy sectors of Washington, Oregon, and California are growing twice as fast as the region’s overall job growth. Along with British Columbia, these states created the Pacific Coast Action Plan for Climate and Energy. Alaska sits as an observer, missing out on this phenomenal economic growth. We can’t keep hitching our state’s future to the inevitable end of the Oil Age. Remember: The Stone Age did not end for lack of stones. We can and must have greater vision.

Two days after the climate rally, I attended the Anchorage Chamber of Commerce’s debate between Alaska’s current governor and his two challengers. Governor Bill Walker, an independent, touted the opening of the arctic refuge to development as an accomplishment. Like Republican challenger Mike Dunleavy, he never even mentioned climate change. He did, however, pledge to replace thawing ice roads (a direct result of our warming climate) with year-round roads for a longer drilling season.

He closed by highlighting Alaska’s tremendous oil and gas assets. Among all candidates, the only mention of Alaska’s renewable-energy wealth came from the last line of a written response provided by the Democratic challenger, former US senator Mark Begich: “We must also identify new long-term growth potentials like renewable energy, our university system and small micro businesses.”

I’d entered the debate under no illusion that I would hear a comprehensive “beyond oil” vision from our gubernatorial candidates. Afterward, I stepped outside into a rare 70-degree September day knowing that the climate disconnect lingers on and that much work remains for those of us rallying for action.