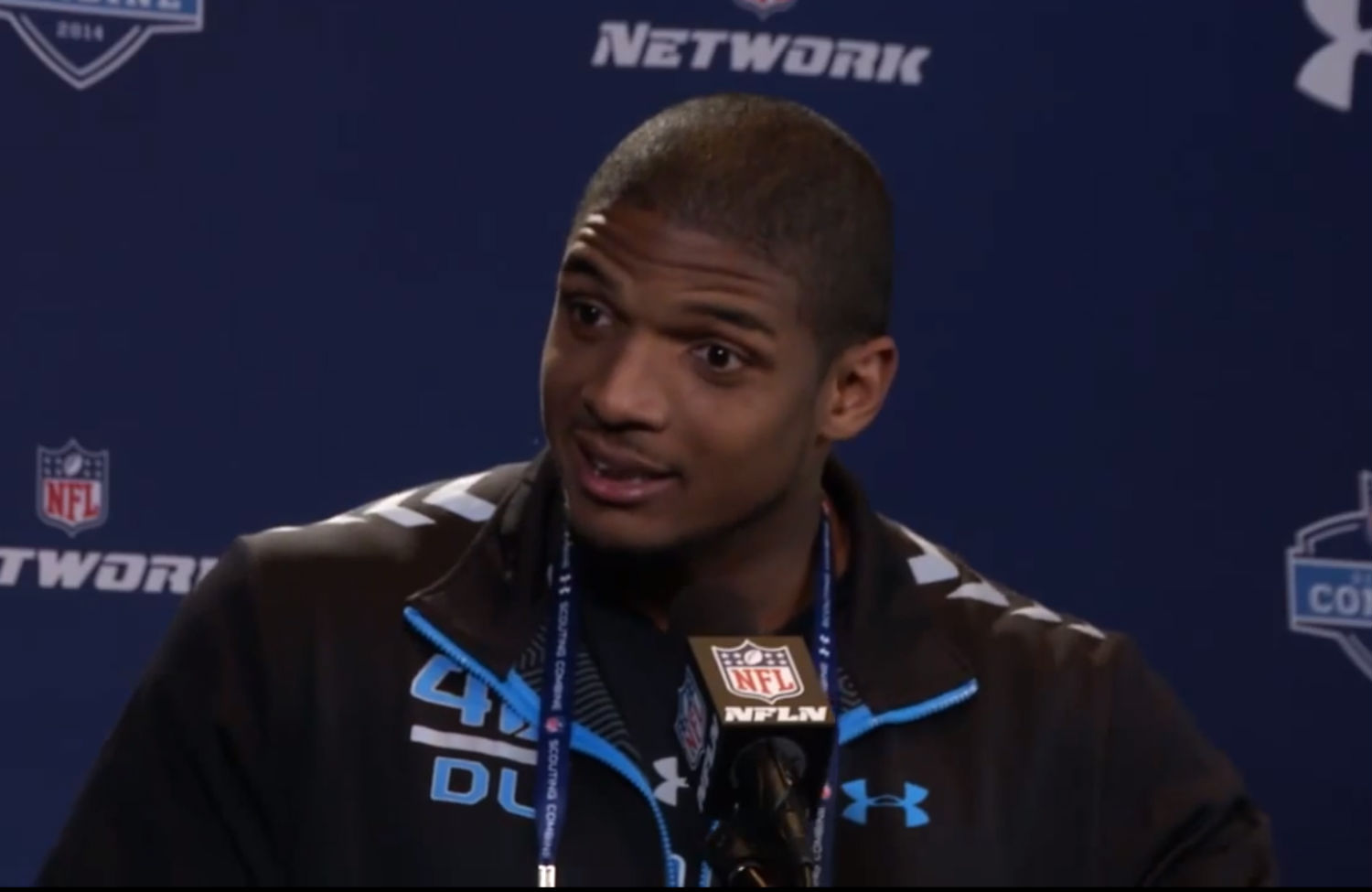 Michael Sam speaks at an interview during the NFL combine on Saturday, February 22, 2014. (Youtube)

On Saturday, Missouri All-American Michael Sam took to the podium at the NFL combine to face a throng of reporters that gawked at him like he had just made the journey from Mars. Here he was: the man who would become the NFL’s first openly gay player. The size of the media swarm shows, if nothing else, that the right-wing media that have refused to cover the Michael Sam story by saying explicitly, to take one headline, “We really don’t care that you’re gay, gay people,” are living in a reality of their own making.

As for Mr. Sam, based on the press conference, he seems to be both savvy as hell and acutely aware that there is no need to stoke the embers of this publicity inferno. It will rage regardless, and the best thing he can do is make the best possible impression on his profoundly risk-averse future employers in the NFL.

The sportswriters in attendance certainly swooned at his every word. Sam dolloped out a series of responses, which suggested less a new archetype of masculinity than a recalling of the old: call it Dick Butkus spliced with Sidney Poitier alongside a dash of Gary Cooper.

For those who relish the prospect a hypermacho NFL player holds to mortally damage the age-old trope that equates being a gay male with being weak, Sam did not disappoint. When asked how he would handle an anti-gay slur, he said, “If someone calls me a name, I’ll have a chat with them. Hopefully it won’t lead to anything further.”

Sam even commented on the standing ovation he just received at a Mizzou basketball game by saying, “I wanted to cry, but I’m a man.” Yup, a regular Gary Cooper.

As welcome as it always is to see stereotypes explode (and to imagine Rush Limbaugh’s head doing the same), there is a vexing aspect of Michael Sam’s square-jawed certitude. Bomani Jones, one of the sharpest knives in the sports writing box, somehow laid this out in 140 characters. Jones tweeted, “What Sam can do is separate sexual orientation from notions of masculinity. So what will we say when he reinforces gender norms as such?”

It’s a question worth asking. So many players in the league are caught in what former Baltimore Colt Joe Ehrmann has called “the man box.” This is the locker-room ideology that preaches, “Bullies are heroes; pain—physical or mental—is for wimps; and women are either ‘road beef’ or collateral damage.” We just received a firsthand look, thanks to Richie Incognito and the Miami Dolphins, of what the “man box” looks like when the sportswriter’s romantic prose is stripped away, and it’s ugly as sin.

There are many pinning a set of extremely unrealistic hopes onto Michael Sam: the hope that his mere presence will crack open the man box and let some other emotional truths inside the locker room. Brandon Marshall of the Bears has taken it upon himself to actually try to do this in Chicago. He wants to make the Pro Bowl and redefine entrenched league concepts of masculinity at the same time. It’s different, it’s courageous, and given his own—and the league’s—history with violence against women, it’s brave as hell. Michael Sam, for now at least, just wants to play football. To do so as an openly gay man is, in 2014, a radical act. That also may be the only mountain we can—and should—ask this young man to climb. As Michael Sam says, he just wants to play football.