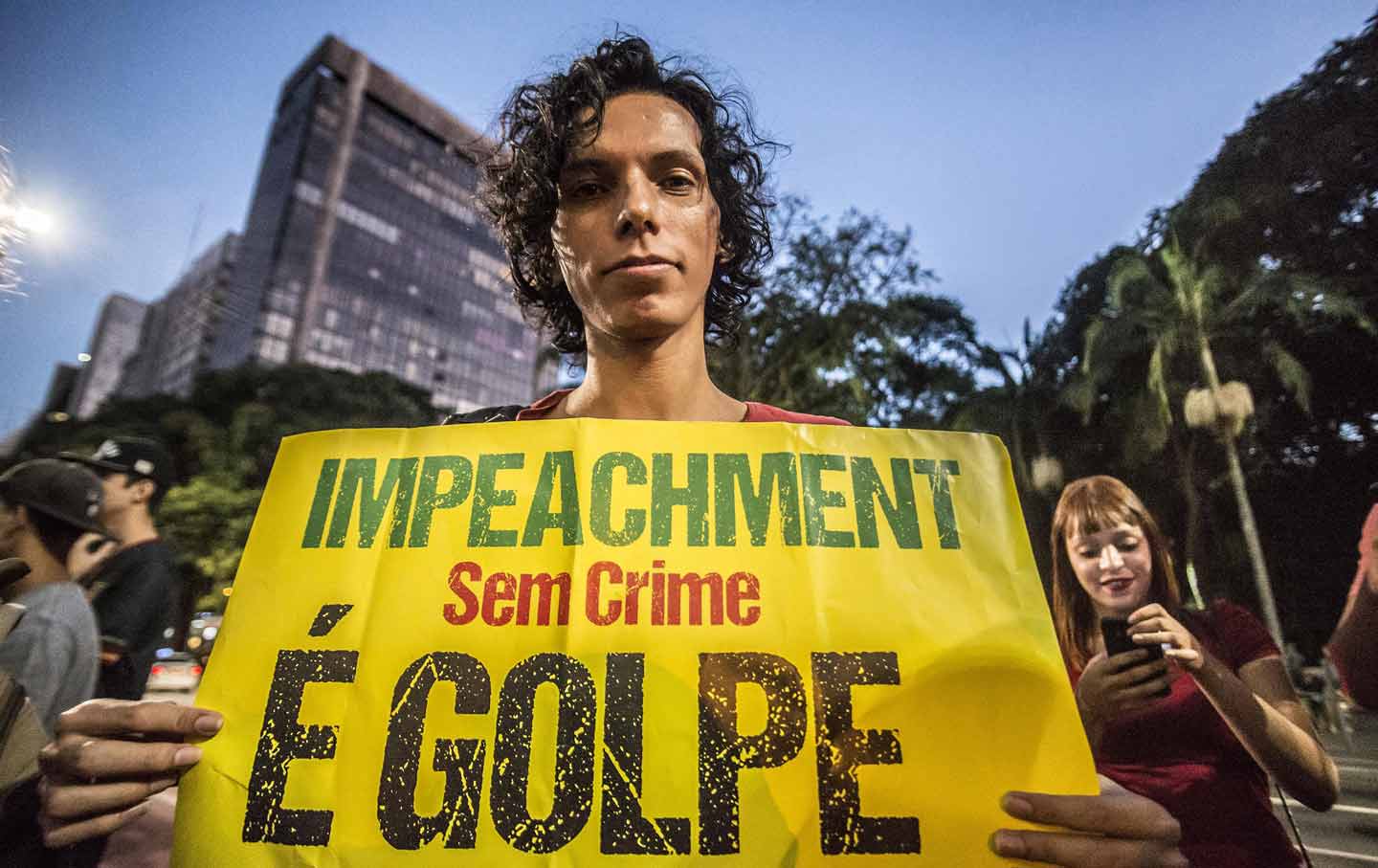 Among the opponents of Brazil’s embattled president, Dilma Rousseff, who is about to be driven from office, is an interest group thought to have lost political power over a century ago: slavers. The other day, an article in The New York Times documenting the many crimes of the politicians involved in the impeachment process said this about Beto Mansur, a congressman vocal in his opposition to Dilma’s Workers’ Party (in Portuguese, Partido dos Trabalhadores, or PT): He is “charged with keeping 46 workers at his soybean farms in Goiás State in conditions so deplorable that investigators say the laborers were treated like modern-day slaves.”

Slavery, of course, isn’t the main axis of conflict between the PT government and its opponents. Others—including Mark Weisbrot, Glenn Greenwald, David Miranda, Andrew Fishman, Gianpaolo Baiocchi, Ben Norton, and Dave Zirin—have documented the many different class and status interests that have allied, using the cudgel of “anti-corruption,” to both deflect away from their own venality and begin the rollback of the mildly redistributionist policies of the PT, which has governed Brazil since 2003. When slavery is mentioned, it is usually as legacy. Brazil imported more enslaved Africans than any other American nation, and was the last country in the hemisphere to abolish the institution, in 1888. As is the case of nations historically founded on settler colonialism and slavery, the PT’s federal economic policy directed at alleviating poverty and lessening inequality is racialized. This was true in 1964, when an earlier mildly reformist government was overthrown in a coup (as my NYU colleague Barbara Weinstein writes in her wonderful new book, The Color of Modernity: São Paolo and the Making of Race and Nation in Brazil). And it is true today, 56 years later.

But actually slavery still exists in Brazil, in the Amazon (as I wrote about in Fordlandia, based on this Bloomberg investigation), and increasingly on the interior’s soybean plantations. Modern-day slavery is, as an official with the Ministry of Labor put it, a “key part of the globalized, export-oriented economy Brazil thrives on.” Workers are coerced either through violence or debt to provide uncompensated labor and forced to endure the most inhumane conditions. They forge pig iron that goes into Brazil’s steel industry, harvest soy, clear rainforests, cut sugar cane, and serve as domestic workers.

One of the first things the PT government did when it took office in 2003, after Luiz Inácio Lula da Silva won the presidency, was to create a “dirty list” of “hundreds of companies and individual employers who were investigated by labor prosecutors and found to be using slaves. Blacklisted employers are blocked from receiving government loans and have restrictions placed on sales of their products.” The PT also stepped up efforts to “emancipate” modern slaves: “In 2003 a national plan to eradicate slave labor updated the criminal statute and introduced a system of labor prosecutors and judges.” Between 2003 and 2015, “the government has rescued 44,483 workers from what it calls ‘conditions analogous to slavery.’”

The “dirty list,” along with the other abolitionist initiatives of the PT, provoked a backlash by those economic interests who profit from modern-day slavery. In late 2014, the country’s Supreme Court, which has been steadfast in its support of Dilma’s impeachers, issued an injunction against her Ministry of Labor to suspend the release of a new list of slavers. The ruling was made on behalf of Brazil’s real-estate and developer’s association. And many of those interests, including planter-statesmen such as Beto Mansur, are found among those pushing for Dilma’s ouster and the destruction of the PT. The Brazilian agro-industry’s main lobbying group, the Confederação Nacional da Agricultura e Pecuária, which endorses Dilma’s ouster, has been opposing the “dirty list” for years. An investigation by Repórter Brasil, an NGO that works against forced labor, reveals that the political parties behind the impeachment (including the Partido do Movimento Democrático do Brasil, the party of Eduardo Cunha, the congressional leader of Brazil’s lower house who organized the impeachment) are the ones that received the most political donations from companies that profited from slave labor.

The profits produced by slave labor in Brazil are relatively insignificant when compared to the wealth of the main drivers of the political crisis: elites tied to finance, energy, media, and industry. But the fight over slavery in Brazil does reveal what is at stake in the conflict in extremis. Many of the politicians now seeking to oust Dilma got spectacularly rich, or represent others who got spectacularly rich, during the good times of the PT’s first decade in office, roughly from 2003 to 2013, running through Lula’s two terms and Dilma’s first. Yet they never, ever accepted the idea that they should subordinate their particular interests to the larger PT political project—despite the fact that it was that project, including mild redistribution, that boosted domestic consumption and got them spectacularly rich. Soybean export soared under PT rule, giving rise to a whole class of heartland barons, some of whom, including men like Mansur, hold seats in Congress. And despite the PT’s aggressive efforts to eradicate modern slavery, forced labor actually increased under its rule, as the industries that used forced labor—among them soy, ethanol, and sugar—grew.

Slavery, however relatively small to Brazil’s larger labor market, represents the thin edge of a larger principle: the right of Brazil’s elites to exploit humans and nature as ruthlessly as they will. As is widely reported, Brazil’s twice-elected president stands today a hair’s breadth away from being removed from office, which might happen as early as the first week in May. Her ouster can be called many things, among them a media coup and a constitutional coup. At least in part, it’s also a slavers’ coup.