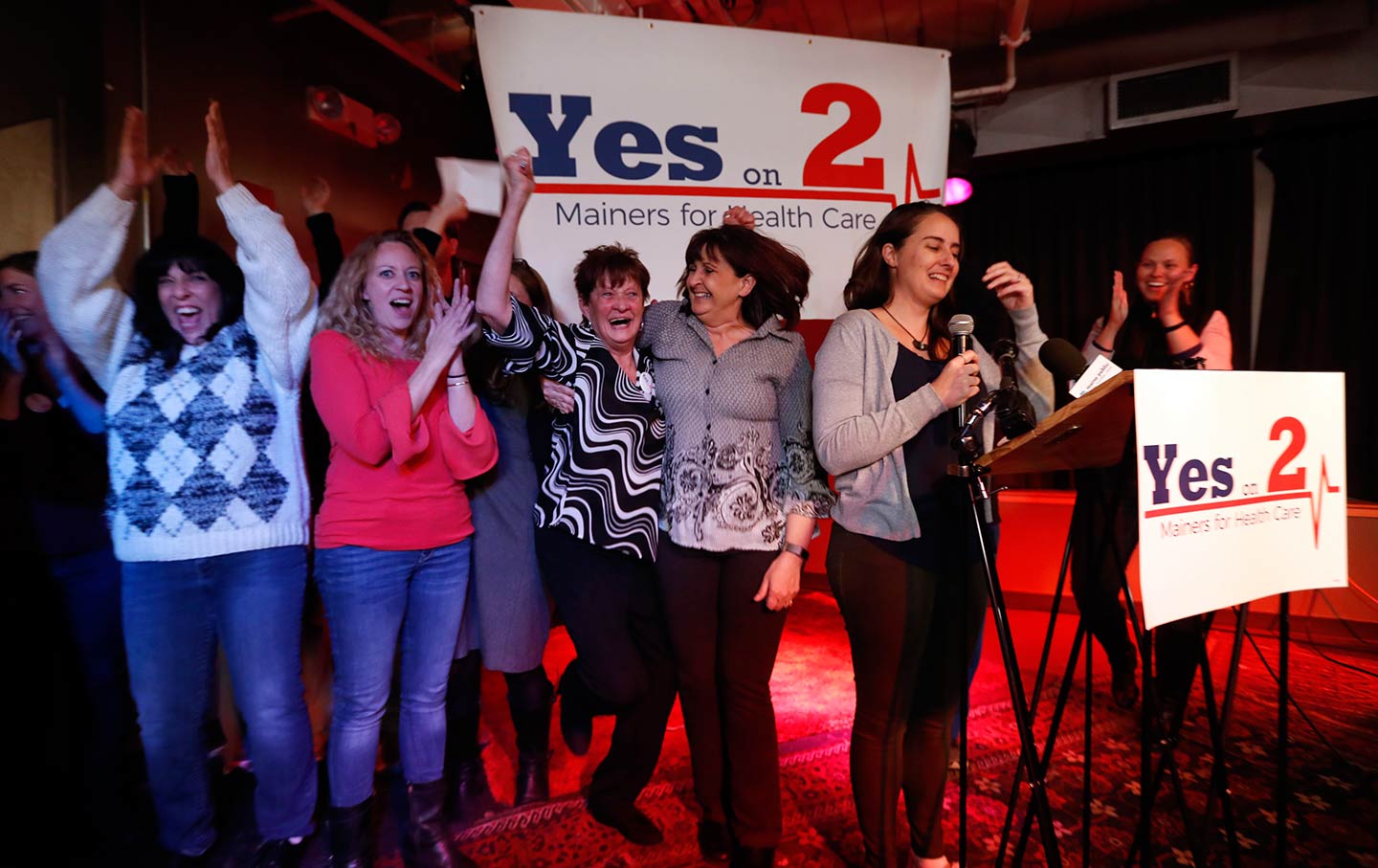 On Tuesday, Maine became the 32nd state to expand Medicaid—and the first to do so through a ballot measure. Voters approved the initiative by a gaping 18-point margin, with support from many conservative, rural areas in the north of the state where expansion will have a significant impact. The victory means more than 70,000 Mainers will gain insurance coverage. And it sends an encouraging signal to health-care advocates in a handful of other states who are looking to ballot initiatives as a way to work around state lawmakers who’ve blocked expansion.

Nationally, about 2.5 million people fall into a coverage gap created by states that chose not to expand the Medicaid program: They earn too much to qualify for traditional Medicaid, but not enough to receive subsidies for private insurance plans offered through the Obamacare exchanges. In Maine, legislators previously approved the expansion, not once but five times—only to have it vetoed repeatedly by Republican Governor Paul LePage.

“We knew this is what Maine people wanted,” said Robyn Merrill, who co-chaired the steering committee of Mainers for Health Care, the group that lead the initiative. Merrill credited an energetic volunteer effort and the advocacy of single moms, veterans, middle-aged folks, and other residents personally impacted by the coverage gap for the measure’s success. “Too many people are being forced to make decisions between going to the doctor and putting food on the table, or keeping the lights on, and no one should be forced to make those choices,” she said. Beyond people struggling to afford health insurance, the measure will also benefit strapped rural hospitals and inject hundreds of millions of dollars into the state economy.

Continued opposition from LaPage could complicate implementation. In a statement released Wednesday morning, LePage declared he would not implement the expansion unless it is “fully funded by the Legislature at the levels [the Department of Health and Human Services] has calculated” and without raising taxes or dipping into the state’s rainy day fund. According to Merrill, the law will automatically go into effect 45 days after the legislature reconvenes in January, and LePage will then have 180 days to implement it. If he doesn’t, Mainers for Health Care will sue. “The people of Maine have spoken, and they sent a clear message to Augusta,” said Merrill.

Luke Mayville, co-founder of a group called Reclaim Idaho, said the ballot measure’s success also sends a message to advocates in other states considering putting forward their own initiatives. Mayville and others spent the summer driving around Idaho in a green 1977 Dodge camper dubbed the “Medicaid Mobile,” talking to residents about health care. Even in towns that voted for Trump by wide margins, almost everyone they talked to knew someone who would benefit from the expansion or who fell into the coverage gap themselves. They asked supporters to sign the camper, as a symbolic petition; soon it was covered in signatures, and Mayville started thinking that a ballot measure could really be viable. 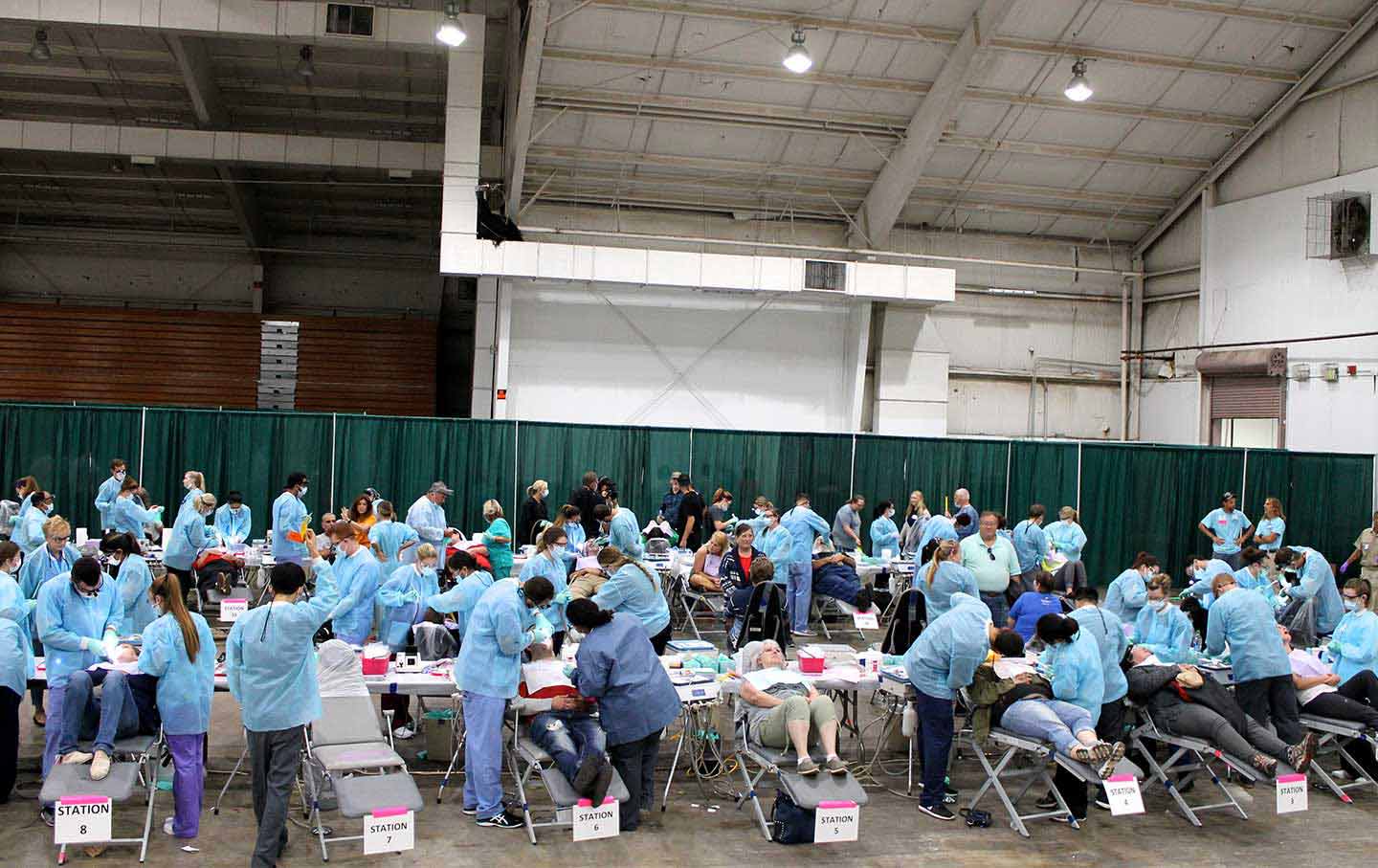 Reclaim Idaho filed preliminary paperwork with Idaho’s secretary of state in October. So far many of the more powerful liberal groups in Idaho have been wary of supporting an initiative out of fear of a high-profile loss, Mayville said. “We think that Maine helps us forcefully respond to all those doubts,” he continued. “Here’s a rural, conservative-leaning state that got it done…. We think Idaho leans more conservative than Maine; however, the fact that the Maine initiative won by nearly 20 points gives us quite a bit of wiggle room.”

Advocates in Utah, where roughly 120,000 people fall into the Medicaid gap, have also filed an expansion initiative for the 2018 ballot. At least seven other states, including Florida, Missouri, and Mississippi, could use the same tactic. Overall, Tuesday’s results suggest voters have more of an appetite for expanding insurance coverage than they do for cutting it: In Virginia’s gubernatorial contest, nearly 40 percent of voters identified health care as their top issue; those voters heavily favored winner Ralph Northam.

“This is a significant step, but one step of many,” said Merrill when I asked her about the implications of the Maine initiative for other states. “At a time when it feels like there’s a lot of uncertainty, when there’s real concern about moving backwards and losing access to coverage, it’s more important than ever to have conversation about affordable coverage and to work to advance it.”