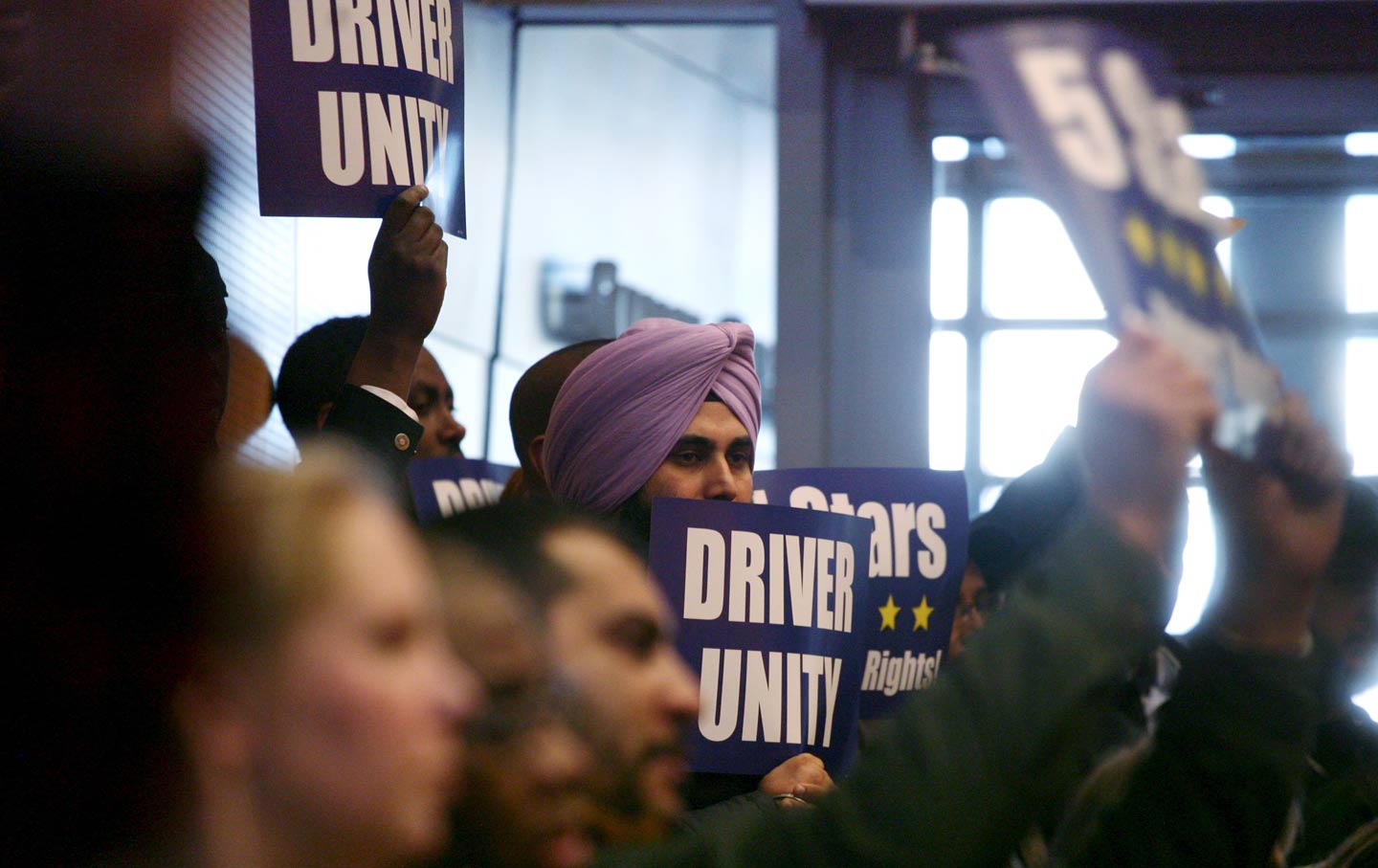 Supporters of ride share unionization cheer at a meeting when the Seattle City Council voted to approve a measure that would allow ride sharing drivers for Uber and Lyft to unionize in Seattle on December 14, 2015. (Reuters / Matt Mills McKnight)

As the gig economy grows, companies like Airbnb and Uber are challenging cities by reshaping entire industries, often harming workers in the process. The challenge for progressive-minded legislators has been that existing regulations have often proven inadequate. Recently, however, local policymakers have begun proposing innovative ways to cope with the changes.

In Seattle, this battle has played out around ride-hailing services Uber and Lyft. When the companies were first legalized in the city in 2014, they presented themselves as a needed transport service that let drivers make money outside of the rigid regulations imposed on the taxi industry. Those claims lost credibility over the next year, however, as Uber drivers’ pay was slashed from $2 per mile to about $1.20 per mile. As cuts deepened, drivers found it increasingly hard to make an income—and many taxi firms found it almost impossible to compete.

We clearly needed a solution. Although collective bargaining had never been tried in the gig economy, a Seattle labor lawyer named Dmitri Iglitzin who’d been mulling the possibility for years approached me with a groundbreaking idea: Rather than tinkering around the edges with new regulations, why not let for-hire drivers unionize and set their own terms?

The premise was intriguing: If Uber and Lyft are going to claim that drivers are independent contractors, then let’s take them at their word and insist that drivers be allowed to negotiate the terms of their contract with these multibillion-dollar companies. While federal law preempts localities from encouraging unionization for private-sector employees, independent contractors are exempt. We believe this means that cities can allow drivers the right to collectively bargain to negotiate a better quality of life and a more reliable transportation service, in a way that regulations cannot.

The timing couldn’t have been better. In the year after Uber and Lyft first began operation, the narrative in Seattle had shifted: The companies, once seen as upstart innovators, came to be seen as major corporations intent on asserting power to the detriment of workers.

Uber and Lyft drivers had already set up an association of app-based drivers through the Teamsters, which represented taxi drivers in Seattle. United, they were starting to raise their voices. They organized rallies and protests highlighting their struggles and testified at City Hall about their limited pay, long hours, and arbitrary deactivation. Growing popular outrage turned up the heat.

Surprisingly, even as criticism rose, both Uber and Lyft did little to fight back. It wasn’t because the companies didn’t have the will or capacity. Only a year earlier, in 2014, they had put up a major fight after the Seattle City Council proposed placing a cap on for-hire vehicles.

This time though, it was clear that they could not win over public opinion. As driver earnings spiraled downward, it was hard for anybody to deny that there was a problem with the companies’ treatment of their workers—and that something needed to be done about it.

Rather than tinkering around the edges with new regulations, why not let for-hire drivers unionize and set their own terms?

In December 2015, the Seattle City Council unanimously passed a law letting Uber and Lyft drivers bargain collectively and establish a process for binding arbitration. In coming months, we will finalize the rules and determine which union or association can represent drivers, who can then vote on whether they want to be represented or not. The US Chamber of Commerce is already suing, hoping that the courts determine that federal law preempts the Seattle law.

Even though contract negotiations are months away, the idea has already caught on in other cities and states. New York and Cincinnati are considering regulations that would expand collective bargaining rights to some gig-economy workers. And in California a similar law was introduced in the State Assembly (although it’s been withdrawn for the moment).

The on-demand economy is delivering important new benefits to consumers. But if we are going to build a more equitable society, we’ll need rules of the road to ensure workers are treated with dignity. Cities have a powerful role in realizing that vision.

The author is a member of Local Progress, a national network started in 2012 by the Center for Popular Democracy to support local lawmakers in the pursuit of progressive change. This article is part of a Cities Rising series that will feature innovative examples of local policymaking by Local Progress members.