Soviet President Mikhail Gorbachev waves a greeting to the crowd on Red Square during May Day celebration on May 1, 1989, in Moscow. (Boris Yurchenko / AP Photo)

I was part of a Nation magazine-sponsored group in Russia in April, and amid the strained dialogue between our nations, and reappraisal of a Soviet leader who once caused Western hearts to flutter, I flash backed to a long-forgotten but inspiring deed. One of many by the man who raised me.

We were in the conference room of Moscow’s Gorbachev Foundation, and as its representative, Pavel Palazhchenko, was speaking, I suddenly realized the date. It was April 26, the birthday of my late father, Harold Willens. It so happens that in 1989, he had undertaken—with a combination of capital, conscience and chutzpah—a project to help the man whose offices we were visiting.

Harold was born in the Chernigov region of the Ukraine in 1914. Shortly after his father—sensing what the Jews would be facing—got himself to America. Harold and his mom lived with an uncle, a boot-maker. Family legend has it that when two Cossacks held guns to their heads, they were bribed with a pair of brand new boots. Still, it was not until 1922 that Harold and my grandmother finally joined the head of the family: first in New York and then in the Boyle Heights area of Los Angeles.

My dad went on to embody the American dream: From the depths of poverty, he mastered a new language, excelled in school, married a beautiful woman (with whom he remained for 65 years), and became a Japanese interpreter as a Marine in World War Two. There, he saw firsthand the destruction of the atom. He went on to graduate with honors from UCLA, bought some speculative real estate (which became Wilshire Boulevard) and became a highly successful businessman in the textile world. As soon as he could, he retired so that  he could spend the rest of his life on anti-war causes.

Which brings us to 1989, when Mikhail Gorbachev emerged, opening up important freedoms in his country and seeming genuinely interested in making peace, not war, with the chilly enemy. So Harold and another Los Angeles businessman, Wesley Bilson (calling themselves card-carrying capitalists) got an idea that seemed foolhardy at worst, quixotic at best. They wrote an open letter to a widely read newspaper, Arguments and Facts, offering Western-style consulting assistance, free of charge, to struggling consumer enterprises.

As the Los Angeles Times then reported, “thousands of Soviets, from factory workers to physicians to ordinary citizens, poured out their wishes. Totally outside the bounds of normal diplomacy, a citizen’s collaboration was forming.” Ultimately, they zeroed in on three projects: a brassiere manufacturer in Moscow, a clothing factory in Moldavia, and most symbolically, a former military base 60 miles from Leningrad, which was transformed into a children’s clothing business. Mrs. Gorbachev publicly supported the venture, and at a jammed press conference, Colonel Victory Makarov announced, “I could not have ever imagined that I would witness what is taking place here today.”

California Congressman Mel Levine soon after gave an impassioned speech on the House floor about the project, saying, “by encouraging entrepreneurship, and encouraging the Soviet government to expel a greater portion of its energies on super-oriented production, rather than its vast military machine, they (Willens and Bilson) hope to lessen the tensions that exist between our two countries.” 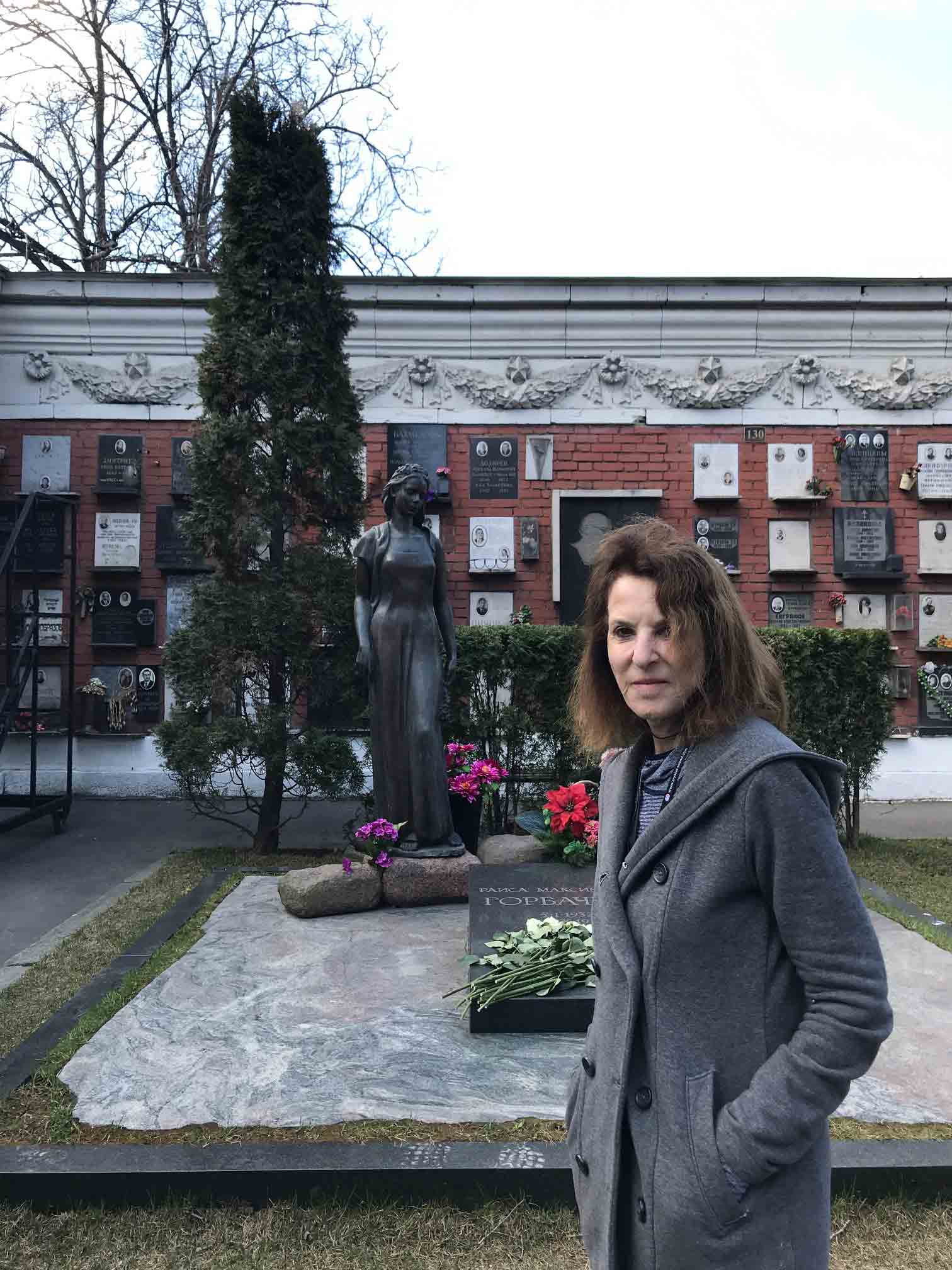 Michele Willens at the grave of Raisa Gorbacheva, Mikhail Gorbachev’s wife, in Moscow.

That was then. Today, of course, those tensions are back big time, the trio of businesses have closed or been transformed, Leningrad is now sparkling St. Petersburg, and good will toward Gorbachev is hard to find.” We had a moment of an enormous psychological breakthrough,” said Palazhchenko, “with arms control and freedom for the press, speech, religion and travel.” Of course, revisionism is fluid (Gorbachev is a much discussed figure in the last season of  the FX series “The Americans”). As always, the hope is with the younger generation, looking past their parents’ woes and current state controls to consider glasnost with fresh eyes.

I was lucky enough to have a father (a great friend of The Nation) who raised me to be open-minded and to challenge authority when necessary. When he went to Russia in 1989, we wondered if he would try to find his roots, any family descendants. Not a chance. I thought him almost cruelly unsentimental. But when your last memory is being carried on a mother’s shoulders to escape anti-semitic monsters, well, it is understandable.

Now, I ask: what kind of man would put aside such harrowing memories and try to help make sure they never return for others? A great one, I’d say. No revisionism there.