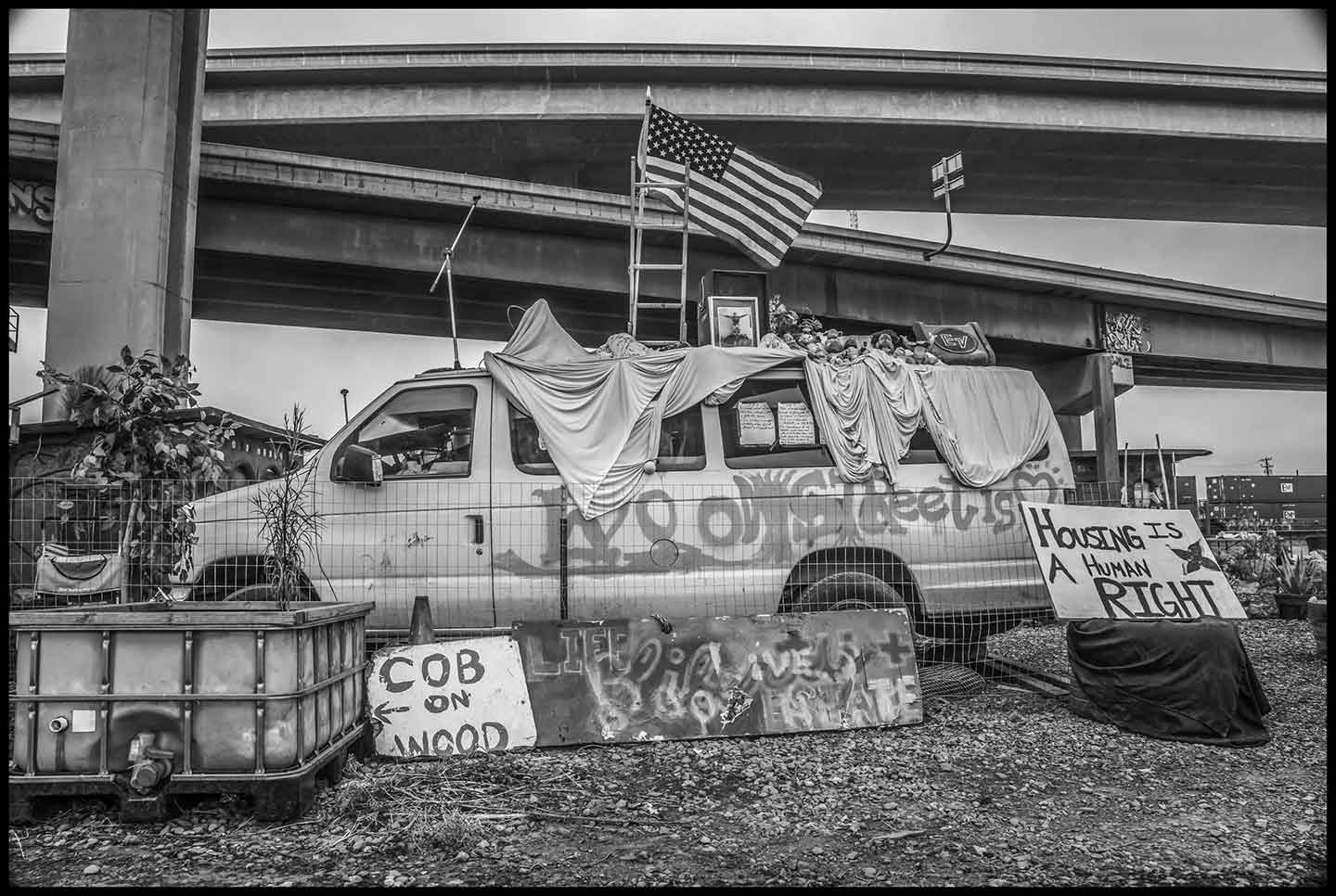 akland, alif., uly 26, 2022—Seven years ago, people began setting up what became Oakland’s largest and oldest encampment, under a freeway maze by a train yard. Some folks drove RVs and trailers into the huge space next to an old railroad trestle, used decades ago to move boxcars between the port and the army base and the main rail yard. Other home seekers set up tents or even more informal housing. One enterprising individual built a room up under the trestle ties, 20 feet off the ground. In an environment that one camp resident compared to the Wild West, it provided safety and some peace during the night. 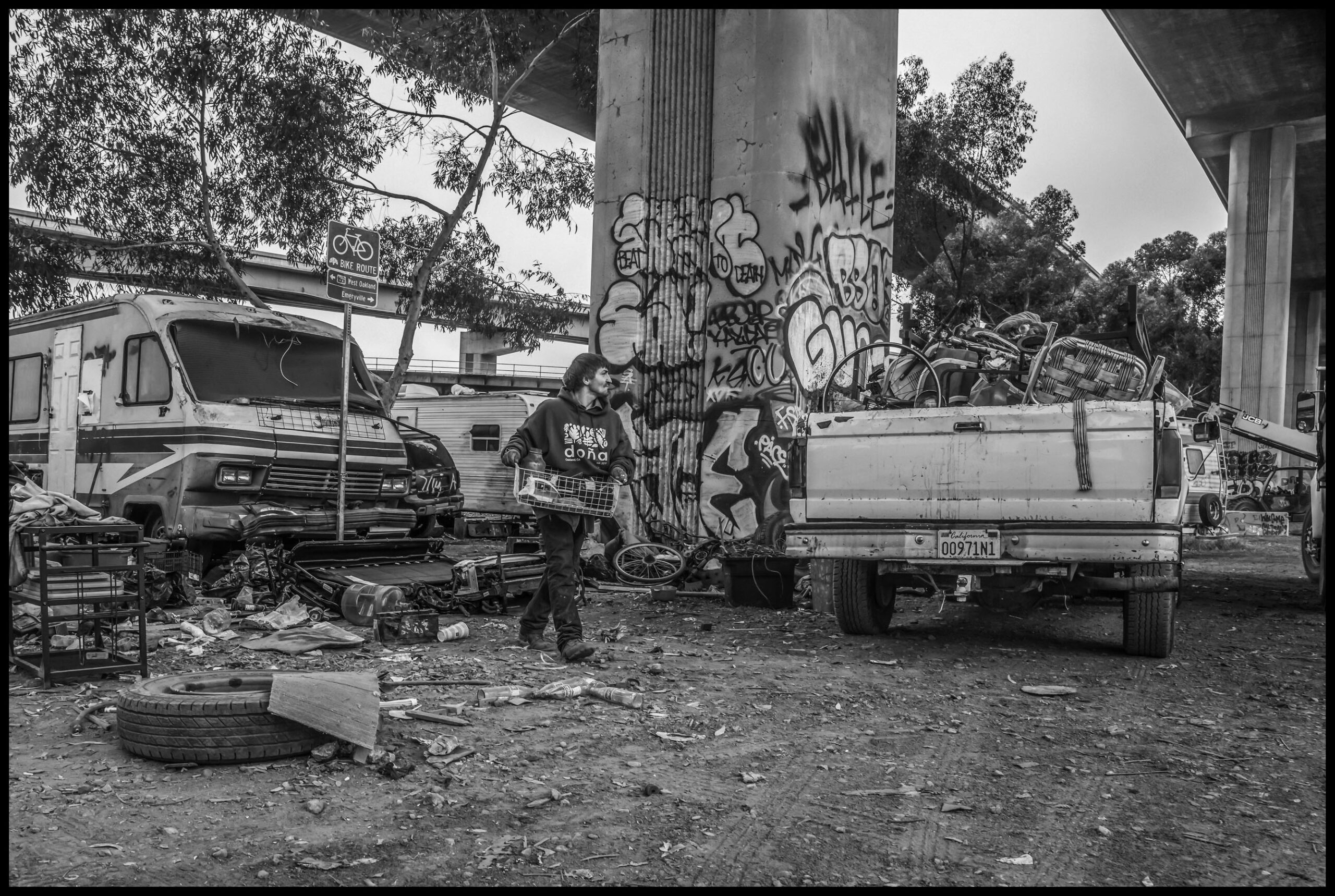 A resident loads belongings into a pickup truck.

The camp lines Oakland’s old Wood Street, which was cleared to build the freeway maze leading to the Bay Bridge. In one small section, residents and supporters erected several small homes and a common area for meetings, entertainment, and other collective activities. The structures are made of cob: a mixture of straw, clay, and sand. So they refer to the encampment as “Cob on Wood.” 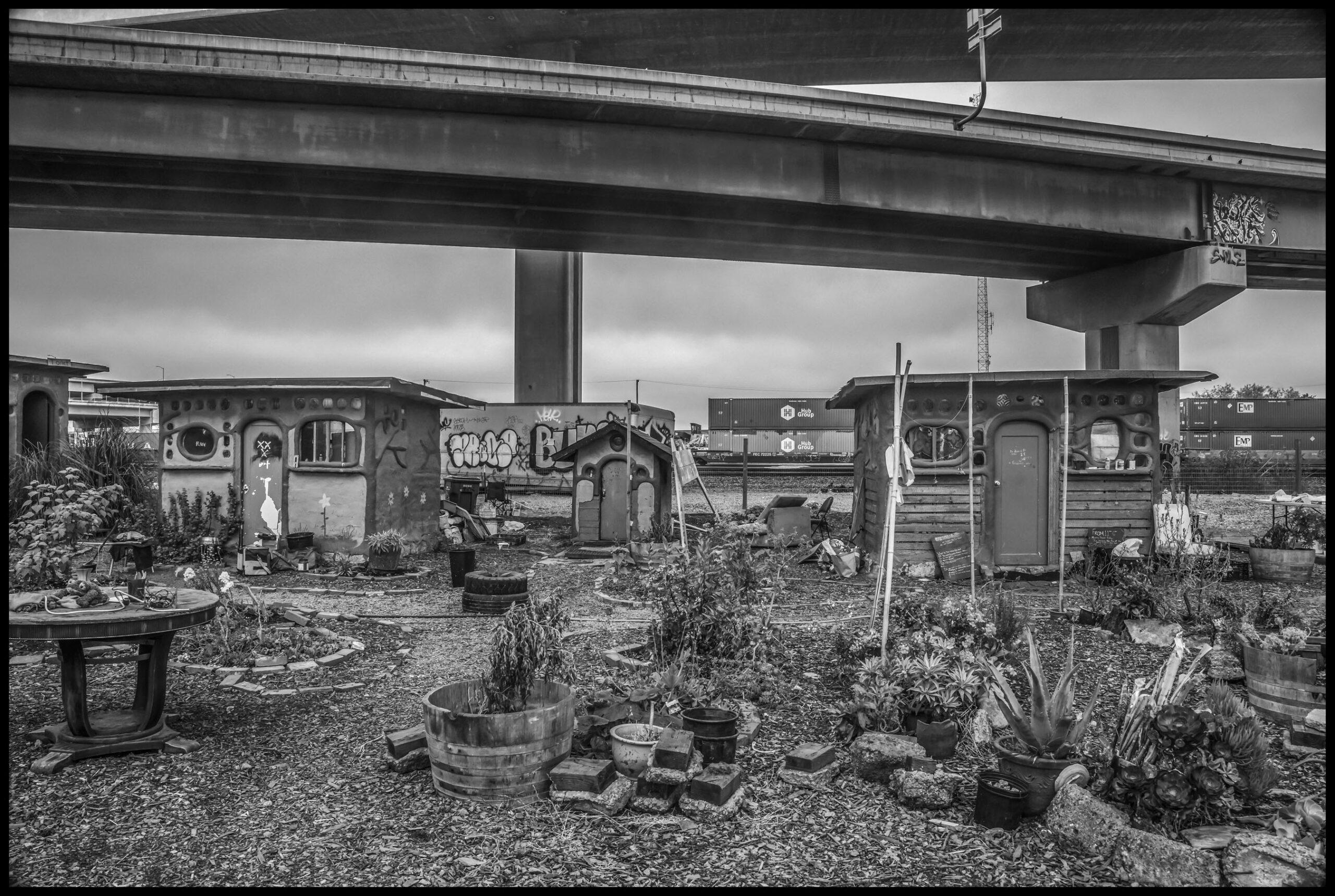 Fires in the camp began to increase a year ago. There were over 90 in the past year. The worst broke out recently, on July 11. Propane cylinders used for cooking and heating exploded in a blaze so hot that vehicles parked under or near the trestle were incinerated. Residents fled. This time no one died, but last April one man lost his life in a smaller conflagration, when his converted bus filled with smoke and he couldn’t get out.

Firefighters responded to these fires, but there is no hydrant near Cob on Wood. To reach the informal homes, they have to stretch hoses over hundreds of feet. A city audit in April 2021 documented 988 fires in 140 encampments over the previous two years. Fires in camps of unhoused people made up 12.5 percent of all Oakland blazes requiring fire department response, and cost the lives of two people during that time. 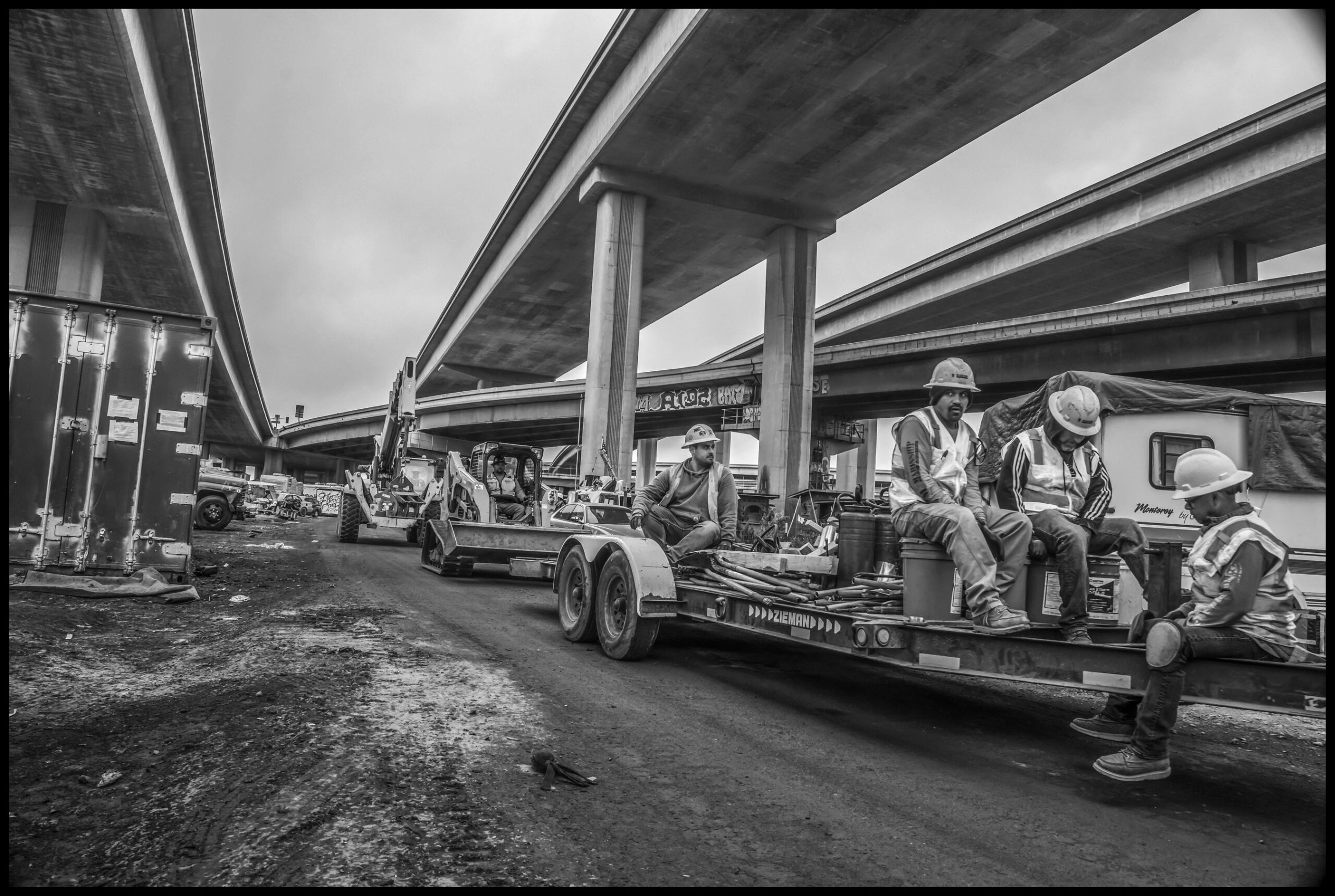 Workers brought to clear the encampment.

A week after Cob on Wood’s last big fire, CalTrans announced that it would close the area and evict the residents. The day after the announcement, however, unhoused people signed individual legal complaints, and their lawyers convinced Superior Court Judge William Orrick to issue a temporary restraining order barring CalTrans’s planned action. While the injunction was still temporary, residents feared that the eviction would happen anyway, and appealed to supporters to come bear witness. The day following the judge’s order, a Highway Patrol SUV showed up, escorting a group of workers and heavy equipment. After standing around for an hour, they left, perhaps in compliance with the TRO, or maybe to evade interfering photographers and witnesses. 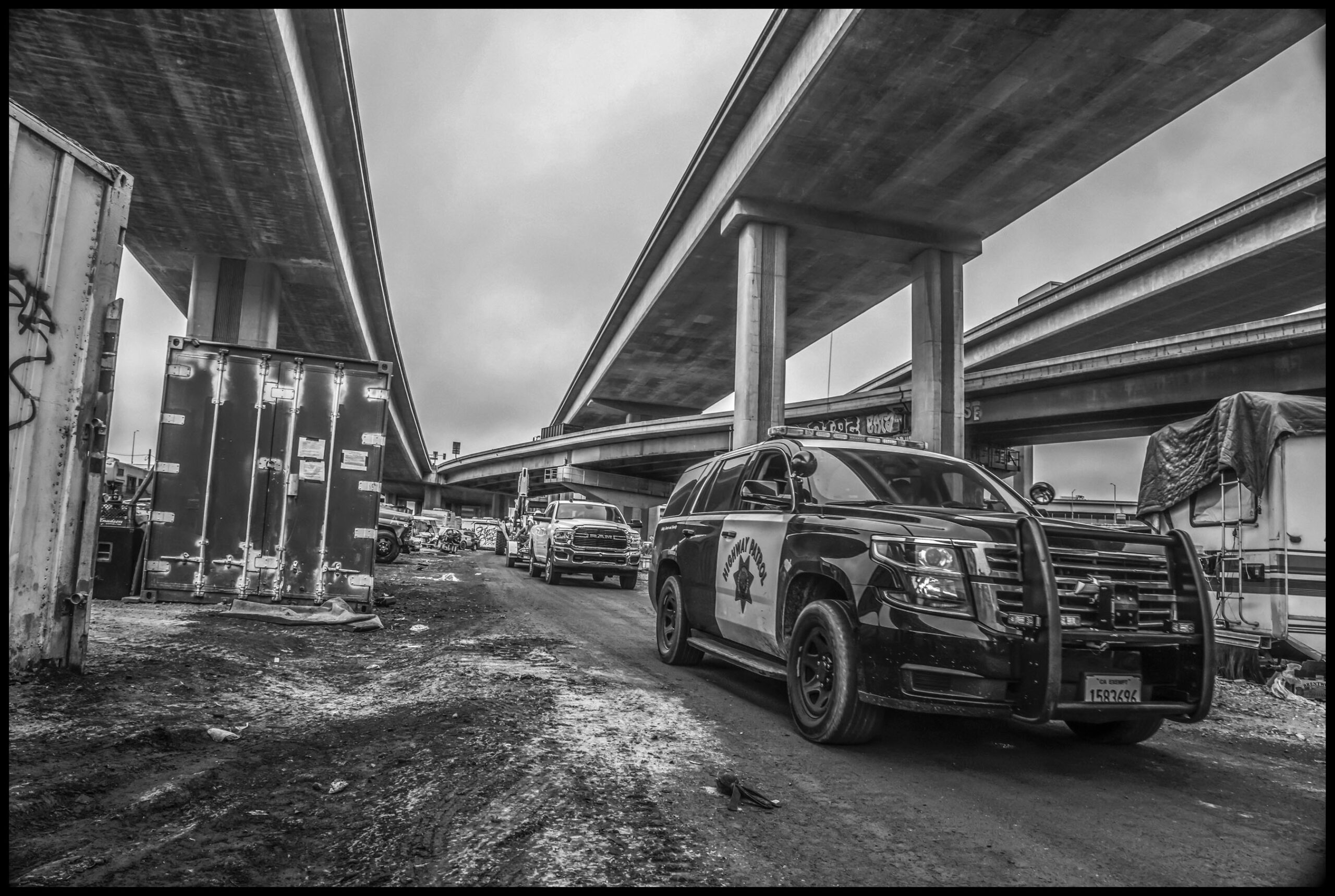 The Highway Patrol bring in workers to clear part of the encampment.

Two days later, Orrick extended his order, saying that replacement housing had to be found for residents before they could be displaced. “I understand everybody wants to wash their hands of this particular problem, and that’s not going to happen,” he told authorities during a Zoom hearing. When he asked them to detail their plans for providing replacement housing, none could provide any. Residents say, however, that CalTrans and the railroad have been slowly clearing areas under the freeway and near the train tracks for weeks.

Oakland city police tased and then arrested one camp resident who resisted being removed from the section of the area that is city land. In this property checkerboard, some pieces belong to Oakland, some to CalTrans, and some to the BNSF Railroad. Residents have no way of knowing which piece of land belongs to whom. 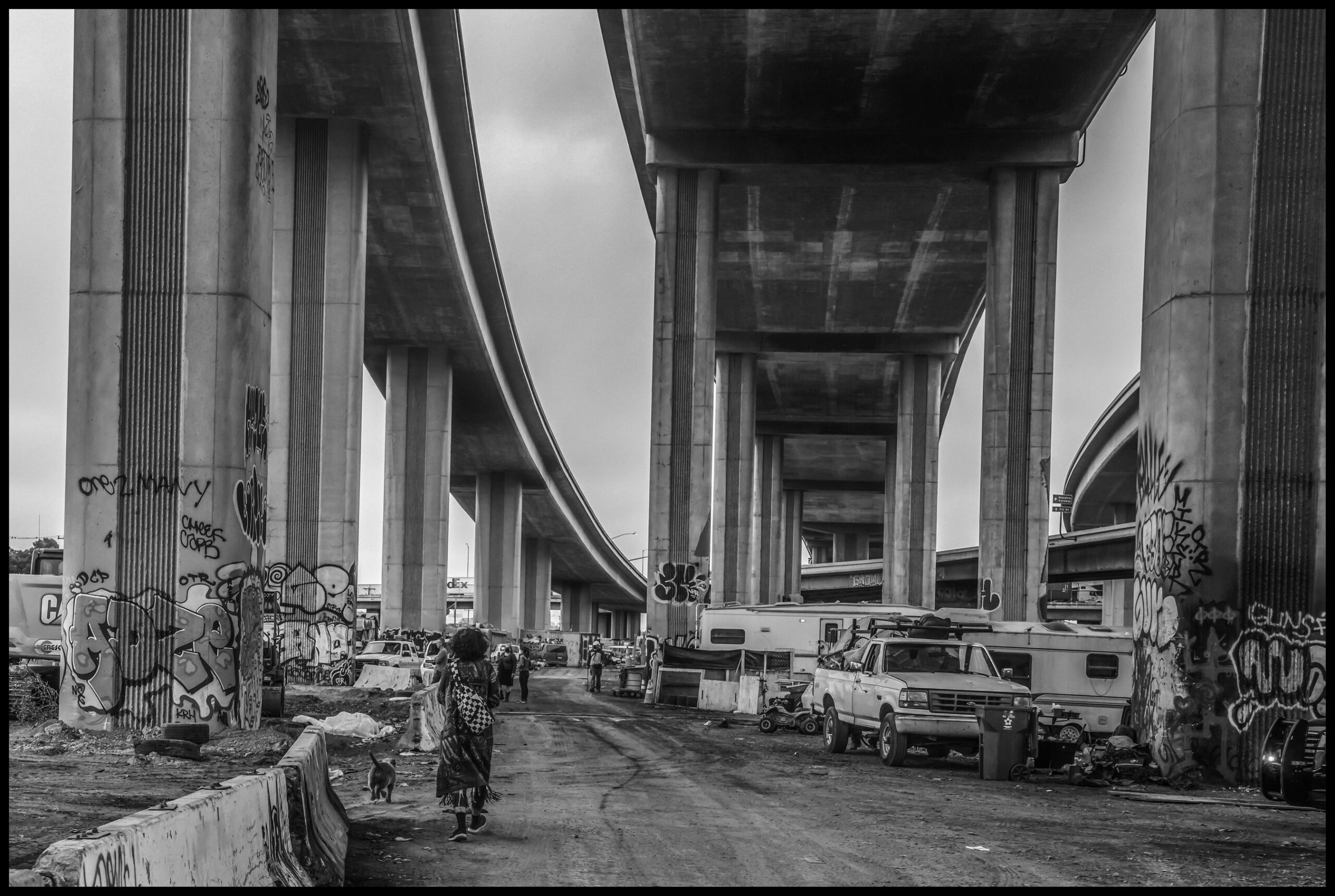 Zelda Fitzgerald, a supporter, walks into the camp.

Last May, the state gave Oakland a $4.7 million grant to house 50 of the 200-plus people who live at Cob on Wood, but the city hasn’t used it to create any housing. Nevertheless, Governor Gavin Newsom criticized the judge’s decision, unhappy with any delay in moving the residents out. “This encampment is risking public health and safety,” he said in a press statement.

More than 5000 unhoused people live in Oakland, but the city has only 598 year-round shelter beds, 313 housing structures, and 147 RV parking spaces. All are filled. United Nations Special Rapporteur on Adequate Housing Leilani Farha visited Oakland in 2018 and told a reporter, “I find there to be a real cruelty in how people are being dealt with here,” comparing Oakland’s treatment to what she observed in Manila, Jakarta, and Mexico City. In those cities, she observed, homelessness is basically tolerated, while in the United States, a far wealthier country, being unhoused is criminalized. 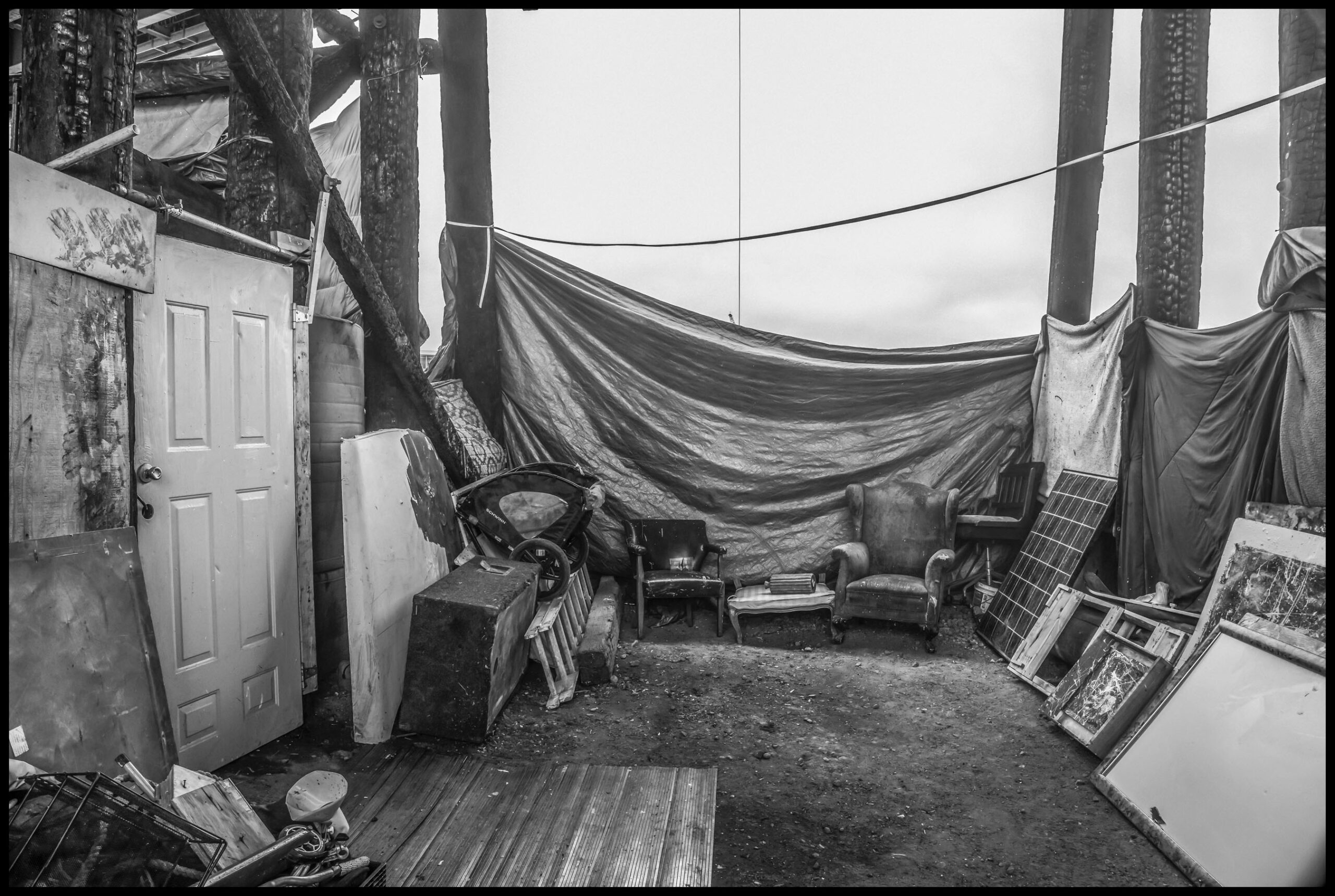 A living room or artist studio at Cob On Wood.

“These are communities,” Cob on Wood resident John Janosko told an Oaklandside reporter following the July 22 hearing. “People stay at these places because they feel safe there.” Nevertheless, the judge made it plain that the respite was temporary. Eventually, the encampment dwellers would have to go. The big question, however, is… where?