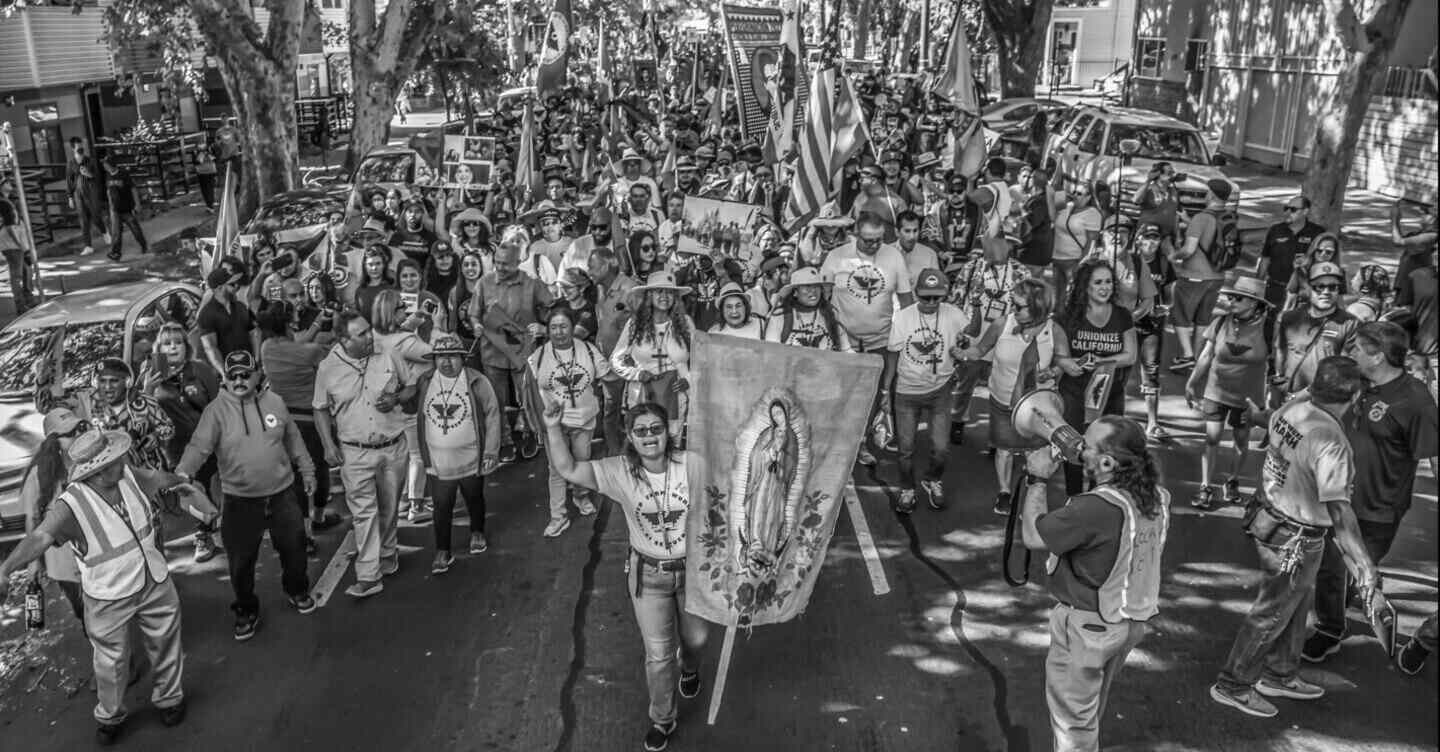 On the last day of the 23-day march from Delano, 5000 farmworkers and supporters headed for the state capitol in Sacramento. (David Bacon)
September 14, 2022

erkeley, alif.—In California’s heated debate over farmworker voting rights, Democratic Party leaders are increasingly closing ranks against the state’s governor, who refuses to sign a bill to make it easier for workers to win union recognition. After a march by workers and supporters from Delano to Sacramento, President Biden himself weighed in.

“I strongly support California’s Agricultural Labor Relations Voting Choice Act (AB 2183),” Biden announced on September 6. Noting that farmworkers had worked through the pandemic, he declared, “The least we owe them is an easier path to make a free and fair choice to organize a union. Government should work to remove—not erect—barriers to workers organizing.”

The barriers to organizing in the fields have historically been fearsome for many California farmworkers. Some of the marchers, who braved temperatures of over 110 degrees as they walked through the San Joaquin Valley, had bitter memories of field elections that went disastrously wrong. One particular catastrophe took place in the late 1990s in Watsonville, when growers fomented an atmosphere of terror to keep strawberry pickers from joining the United Farm Workers.

In mandatory meetings, anti-union consultants warned that there would be violence if the union were organized and that growers would fire people and go out of business. These were not idle threats. In 1995 VCNM, a large Watsonville strawberry company, plowed under a quarter of its fields after workers organized. The company later disappeared completely. Then, strawberry growers set up a company union to fight the UFW. Dozens of pro-UFW workers were denied jobs or fired in the following seasons. 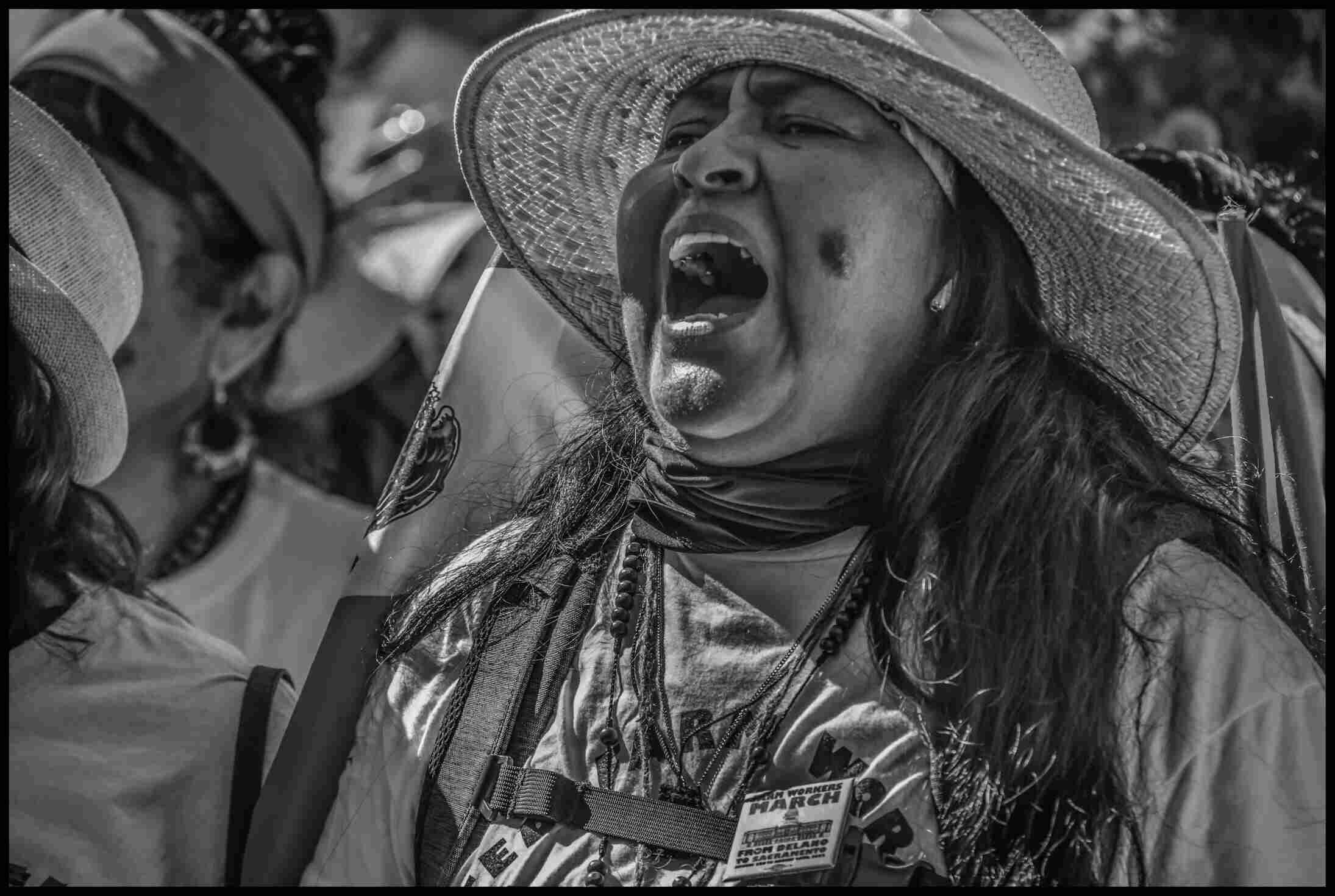 One worker, Efren Vargas, recalled, “My foreman told me how to make trouble for the UFW organizers when they came to the field to talk to us.” In 1998, he and other pro-UFW workers at Coastal Berry were beaten in the fields. Vargas was hit in the head, knocked to the ground, and kicked repeatedly. Supervisor Joel Lobato told him, “You deserved to get fucked up.”

After the beatings, the company union filed for an election with the Agricultural Labor Relations Board, to keep the UFW out. The UFW protested that a fair election couldn’t be held in that atmosphere, but the ALRB went ahead anyway. Workers went to vote in the fields where the beatings had taken place. Predictably, the company union won.

This summer, when 26 UFW members and supporters began marching from Delano on August 3, they were hoping to end growers’ ability to use fraudulent elections like the one at Coastal Berry. When they arrived in Sacramento 23 days later, having traversed 330 miles, some remembered what happened in the fields of another notoriously anti-union grower, Gerawan Farming. 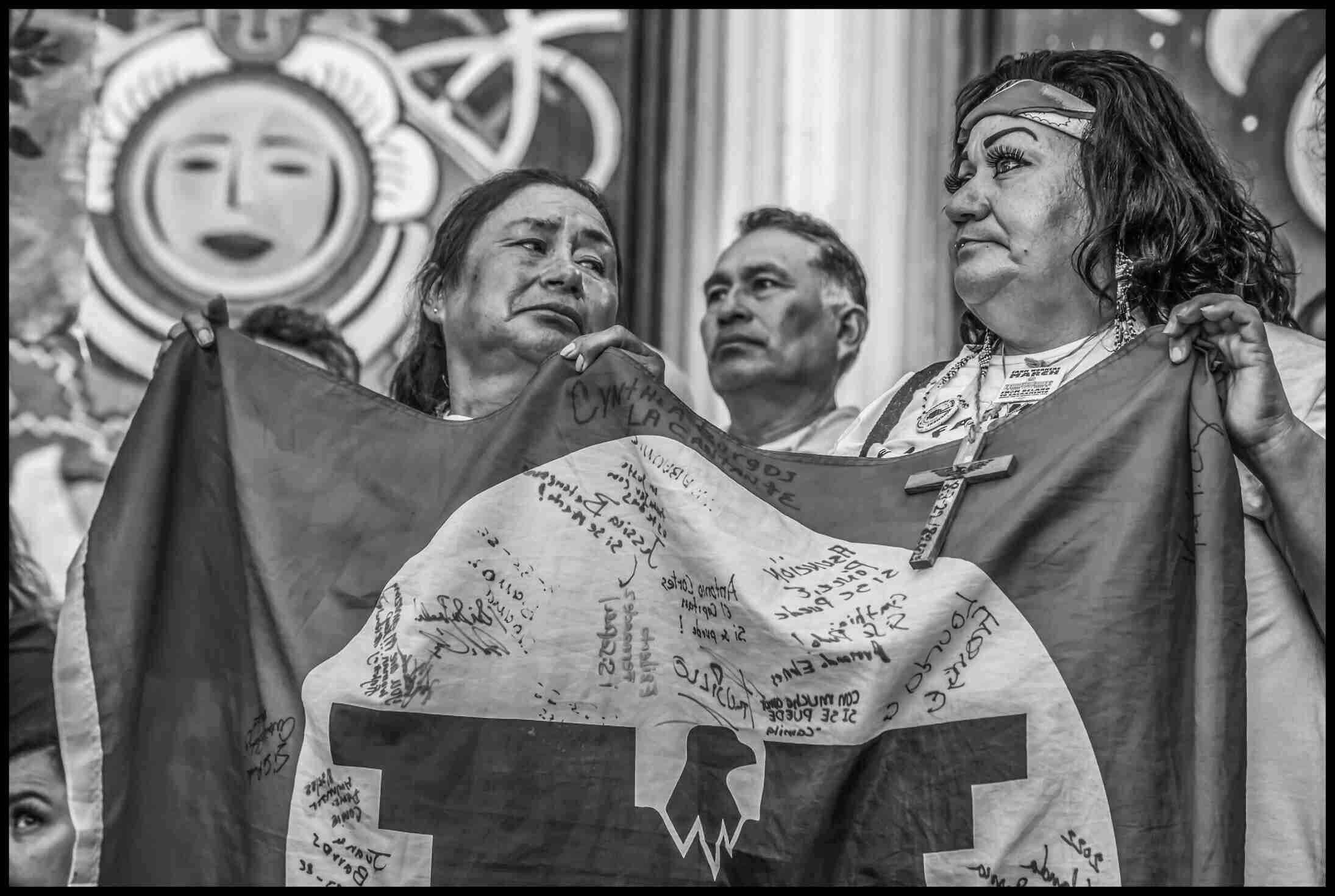 In 2013, in its effort to get rid of the obligation to negotiate a union contract, Gerawan foremen went into its peach orchards and vineyards, demanding that pickers sign a petition against the union. Supervisors shut down work entirely, and blocked entry to the fields and packing sheds, to pressure employees. One UFW supporter, Severino Salas, recounted threats that if the company had to sign a contract with the union, it would tear out the grapevines and trees.

The ALRB then conducted an election in the same fields where the threats had been commonplace. When the votes were finally counted, workers had lost their right to negotiate a union contract. Gerawan had achieved its goal. When workers have to vote in the fields, the voting booth isn’t a pure, isolated place where the world doesn’t intrude. It’s part of the world where the threats are made. Consequently, growers have tried to prevent any changes in the field voting procedure.

This year’s march from Delano to Sacramento was not the first to try to remedy this situation. Last year, the union organized a similar peregrination. Both were directed at California Governor Gavin Newsom, asking him to sign AB 2183, to give farmworkers an alternative to high-pressure field elections. Last year, Newsom vetoed the bill on the march’s first day. This year, he waited until marchers had completed their 23-day trek before announcing that he would not sign this time either. 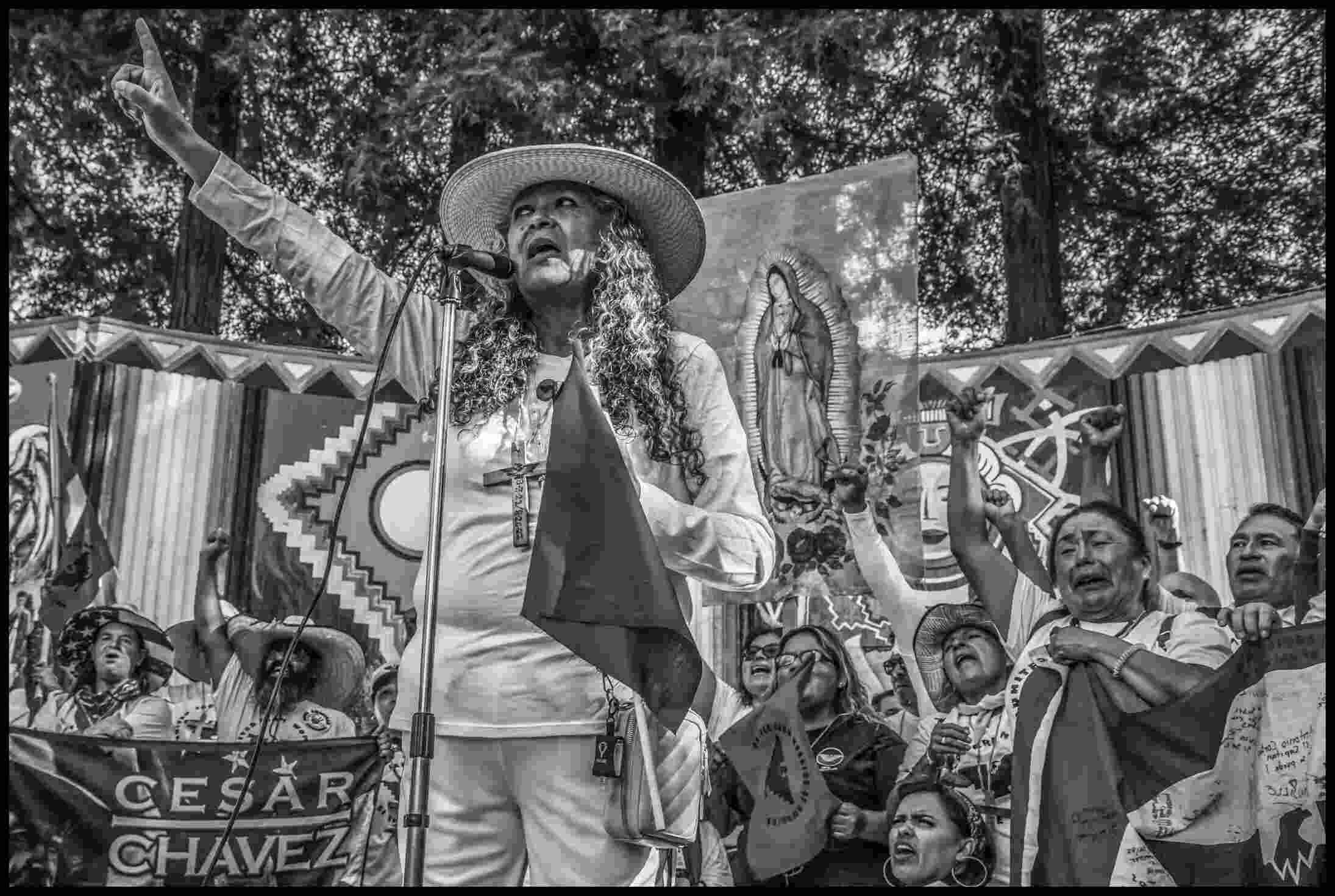 After walking 330 miles in intense heat, farmworkers react with anger and dismay after United Farm Workers President Teresa Romero tells them that the governor has announced he will not sign AB 2183. (David Bacon)

AB 2183 proposes two alternative systems for voting. In one, growers would pledge in advance to remain neutral if workers try to organize, and agree not to require workers to attend anti-union meetings. The grower would allow workers access to union organizers at work. When the union asks for an official election, the board would inform the company and mail ballots to all the workers, who would fill them out at home and send them back. Workers could ask for ballots directly from the ALRB.

In the other alternative, where growers don’t agree to neutrality, workers could sign union authorization cards at home, and the union would then submit them to the ALRB. The labor board would then compare the cards to a list of eligible employees. If a majority have signed, the company would be obligated to negotiate a contract. This system already exists for California’s public employees. 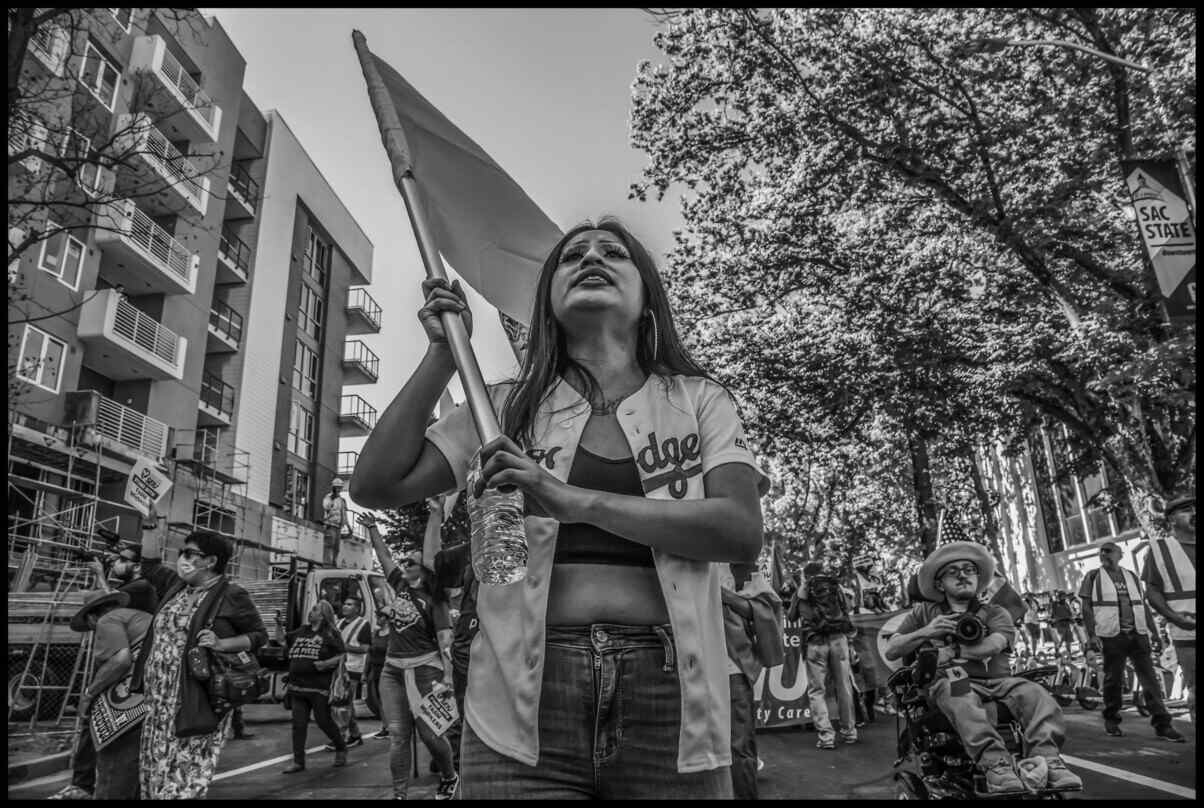 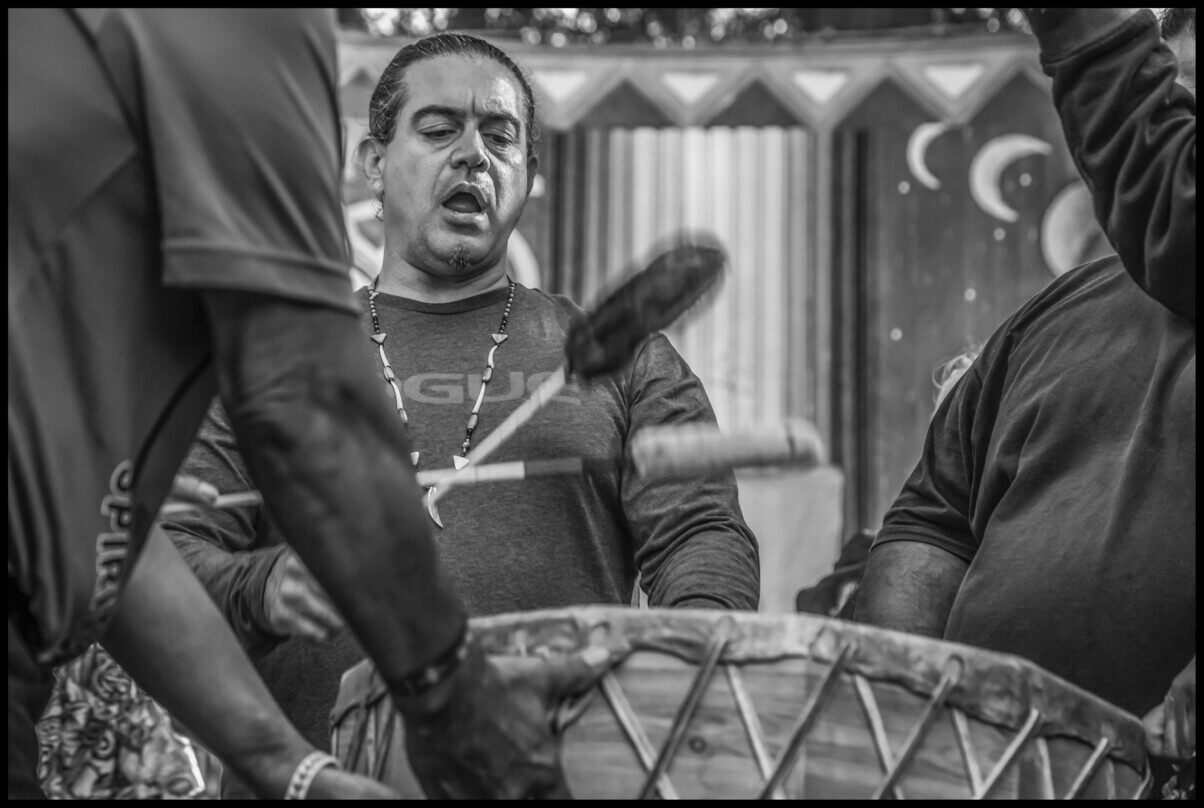 Unions far beyond the UFW have fought for labor law reform for years to provide alternatives like these. During the Obama administration the AFL-CIO sought passage, unsuccessfully, of the Employee Free Choice Act. That would have allowed the same “card check” process, avoiding an election on the employer’s property. Unions made another push, after President Biden took office, for the PRO Act, which would also make it harder for employers to use intimidation tactics.

Last year, Governor Newsom argued that he had concerns over the “security” of the ballots. This year, Newsom’s communications director, Erin Mellon, told The Fresno Bee that, although he supports changes in state law to make it easier for workers to organize, “we cannot support an untested mail-in election process that lacks critical provisions to protect the integrity of the election and is predicated on an assumption that the government cannot effectively enforce laws.” 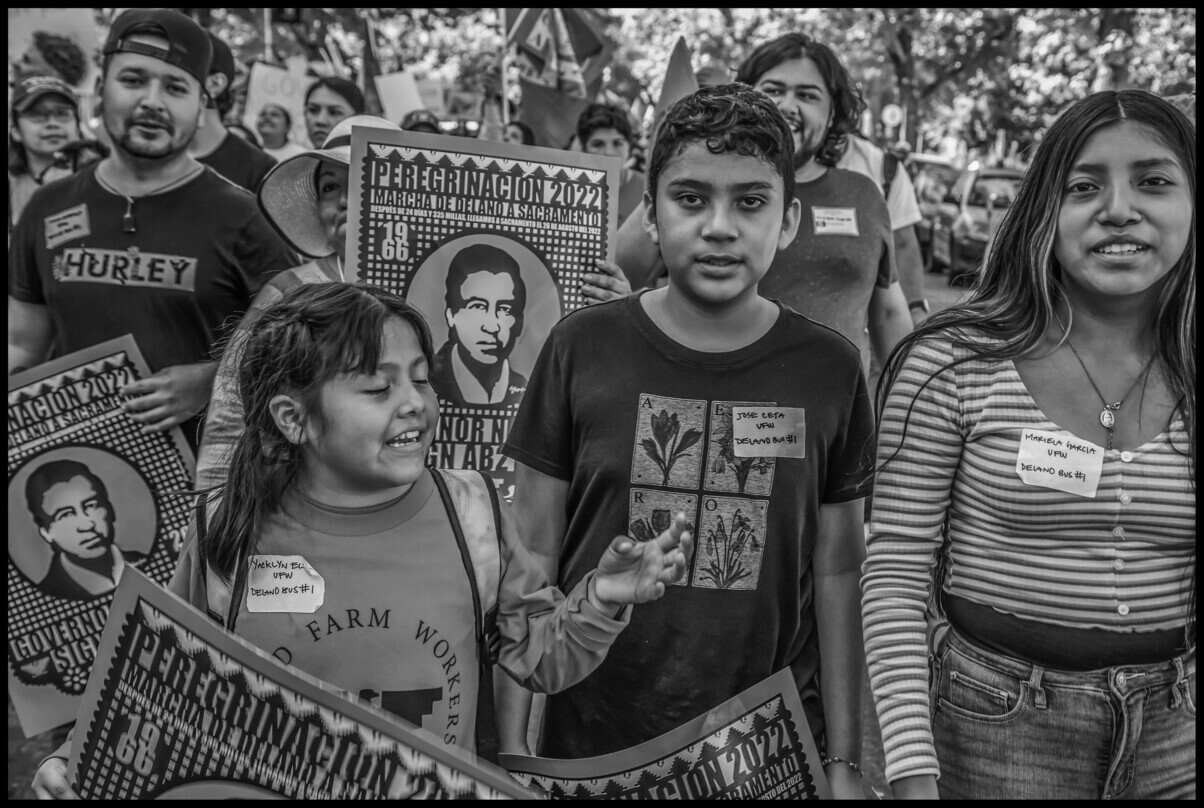 This was a strange argument, since absentee voting is used extensively in California in general elections (including Newsom’s own recall election), so there’s plenty of experience with it. Peter Schey, director of the Center for Human Rights and Constitutional Law in Los Angeles, responded, “Passage of this bill would provide California’s farmworkers with a variety of means for casting their votes, including voting by mail and dropping off ballots at designated locations. These and related provisions in the bill will simply provide farmworkers with more meaningful opportunities to exercise their longstanding right to vote in union elections.”

Newsom seems blind to the existence of grower intimidation, which the absentee process is designed to make more difficult. Growers and their allies argue that intimidation is not a problem. Republican Latino political consultant Mike Madrid, for instance, claimed, “These are not issues of huge concern. They are of symbolic concern.” The argument filed by the California Farm Bureau Federation against the bill states, “This bill would strip agricultural employees of their rights to express their sentiments about unionization in secret-ballot elections conducted by the Agricultural Labor Relations Board, free from fear, intimidation, coercion, or trickery exerted by anyone interested in the outcome.”

According to Schey, however, “There is no question but that these [in the field] voting conditions create opportunities for voter intimidation and prevent many farmworkers from participating in an election out of fear of employer reprisals. While the Agricultural Labor Relations Act prohibits the use of intimidation by employers, it is our experience that the reality on the ground is that agricultural employers regularly use fear-instilling tactics to prevent unionization.” 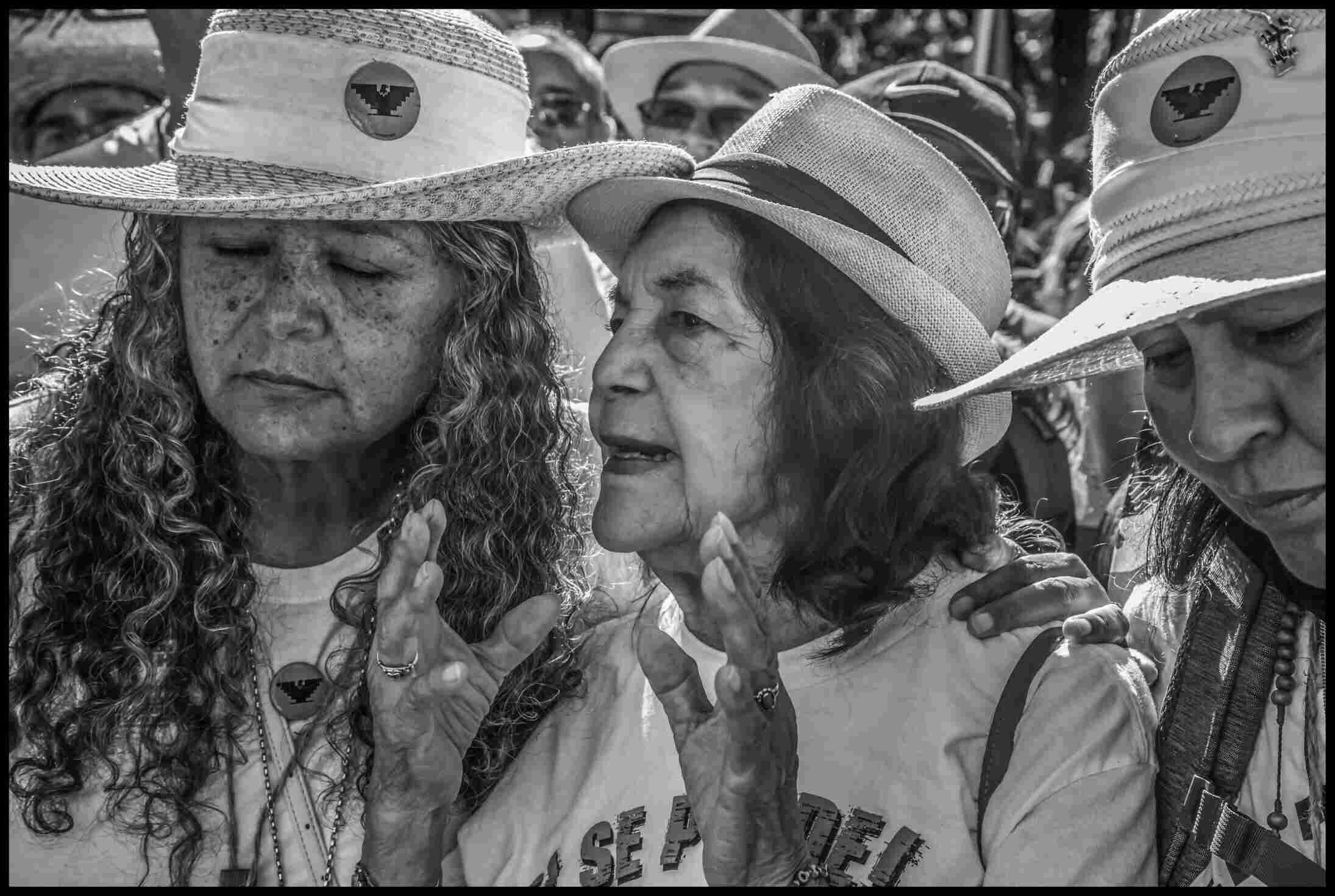 UFW President Teresa Romero and union cofounder Dolores Huerta march with other union veterans to the state capitol to call on the governor to sign AB 2183. (David Bacon)

But Newsom’s rationales for opposing AB 2183 may have to do less with the security of the ballots and more with his own relationship with growers. According to Sacramento journalist Dan Bacher, Newsom received over $755,000 in 2018 in campaign donations from the agricultural industry. “That figure doesn’t include funds raised to fight his recall,” Bacher says, “which included $250,000 from Stewart and Lynda Resnick, billionaire agribusiness owners of the Wonderful Company.” In the 2018 election cycle the Resnicks, the world’s largest almond grower, contributed $116,800, while E.J. Gallo, another storied and wealthy grower, gave the governor $58,400.

Newsom agreed to put his own interest in the PlumpJack Group, which he founded with billionaire Gideon Getty in the 1980s, into a blind trust when he became governor. But during the years of his ownership, the company, once just an operator of restaurants and boutique hotels, expanded to become an important agribusiness enterprise. It is now a major vineyard owner, with four estate vineyards, producing between 50,000 and 75,000 cases of wine each year. A decade ago, PlumpJack paid $400,000 per acre for one 45-acre vineyard, and this year bought another in Napa Valley for $14.5 million, from another wealthy grower, Robert Mondavi.

In the state legislature each year, AB 2183 has passed both houses by substantial majorities. Taking the side of the union, and urging the governor to sign the voting rights bill, legislators have been joined by Vice President Kamala Harris, House Speaker Nancy Pelosi, and former secretary of Housing and Urban Development Julian Castro. Helping to organize this Democratic Party pressure is Cesar Chavez’s granddaughter Julie Chavez Rodriguez, now White House director of intergovernmental affairs. 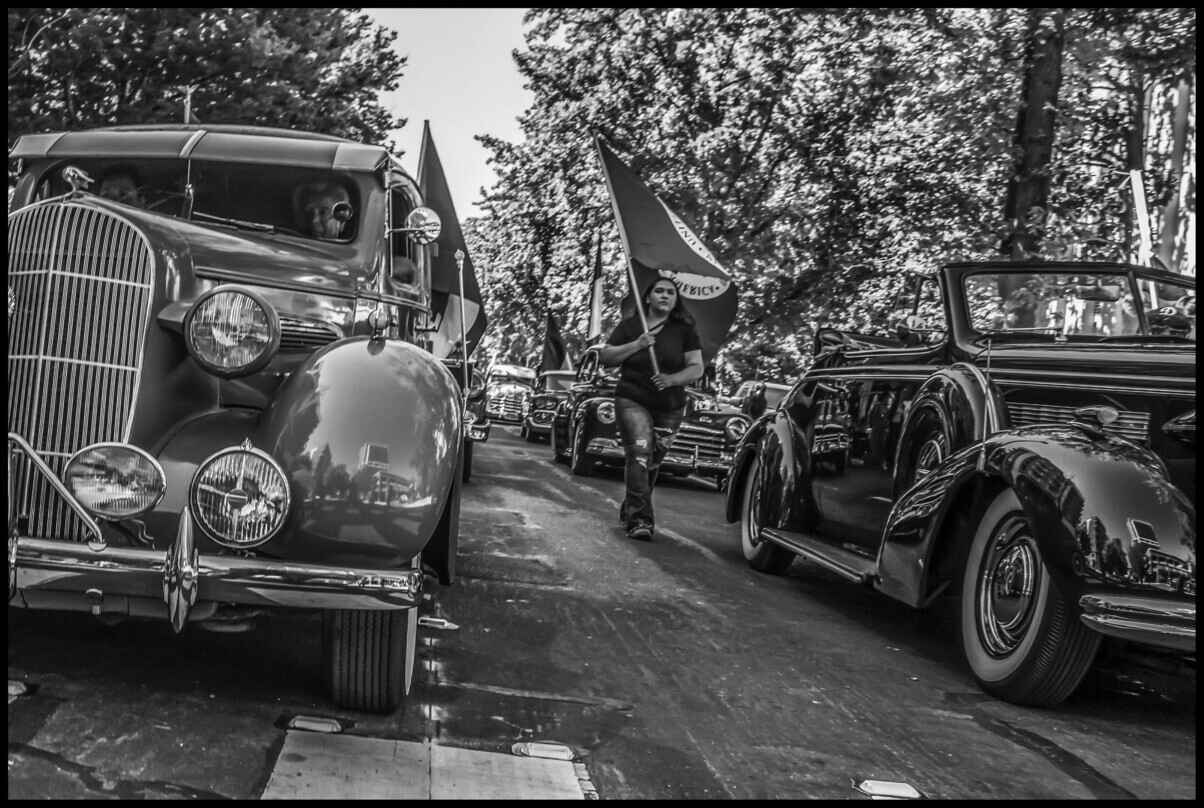 Politicking and inner-party infighting, however, should not obscure the fundamental issue of workers’ rights. Growers, like employers generally, want to control the voting process as much as they can, not from some altruistic interest in the sanctity of the vote but because they want to keep the union from being organized.

In the end, however, it’s really no business of the growers where farmworkers vote. If the right to decide whether to organize a union belongs to workers, and only to them, they should be able to exercise that right at home or away from the field, or wherever they want.