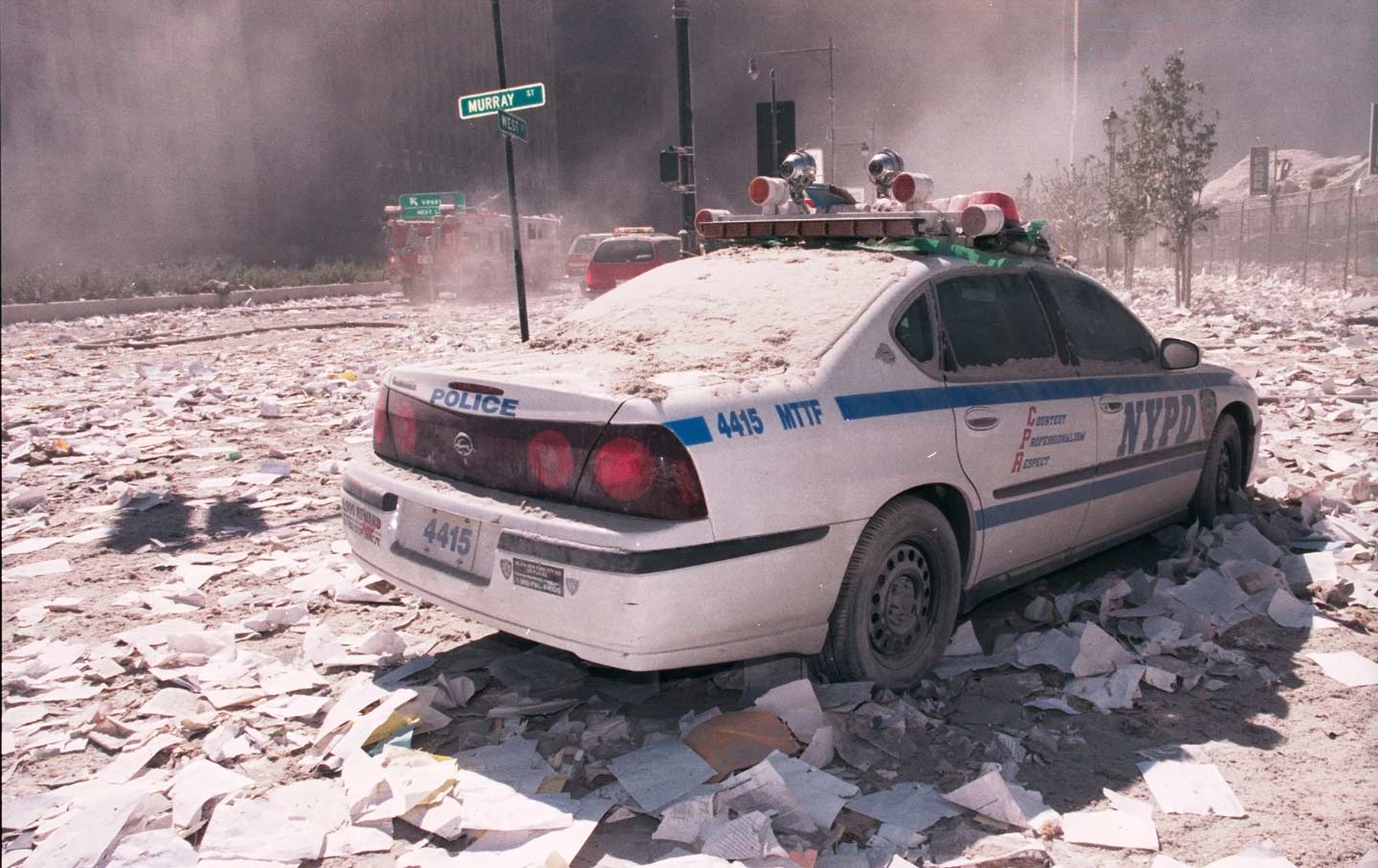 It was going to be a perfect day; that much was clear from the start. It was one of those rare, glorious New York City days of low humidity and crisp blue skies, when the suffocating heat of summer had departed, leaving behind only its warm afterglow. I had left my Brooklyn apartment before work that morning to vote in the Democratic mayoral primary, and after I cast my ballot and headed toward the subway, I walked by two women talking to each other on their stoop. One of them said, in some confusion but in ordinary tones, something like, “Did you hear that noise? It sounded like an explosion…” I thought nothing of it.

I rode the F train, which in part of its Brooklyn journey to Manhattan is elevated, bending for a few minutes in a big curve through the Gowanus section, allowing panoramic views of Lower Manhattan. As I was reading my paper (it was still very much the era of hard copy!), I saw a man at the end of the car pointing out the window toward the World Trade Center and shouting excitedly. Like the other passengers, I saw flames pouring out of one of the upper stories of the North Tower. “Good Lord!” I remember thinking. “I bet someone set off a bomb.” Every New Yorker at that time remembered the 1993 truck bombing of that same tower by a cell of Islamist extremists; I’m not sure if I was thinking specifically of that attack, but Al Qaeda’s terror threats against the United States were certainly well-known by then. None of us, though, could have imagined that terrorists would fly jumbo jets into buildings.

The train went back underground. This was long before Wi-Fi; in fact, we had barely entered the era of the dumb cell phone; nobody on the train knew anything about what had happened. The next thing we heard was the conductor announcing, before we screeched into the West 4th Street station, “This train is going out of service due to a police emergency.” In fact, all trains were out of service.

It was only when we emerged onto Sixth Avenue that we realized this was going to be a day unlike any we had experienced in our lives. There was no traffic at all on that multilane thoroughfare, which was ordinarily jammed with honking cars and trucks. Dozens of people were standing in the middle of the avenue, all staring downtown, gape-jawed, in shocked disbelief. The tops of both WTC towers were now shrouded in an enormous, rapidly growing cloud of smoke. I walked quickly eastward toward the Nation office, stopping briefly at each southward-facing avenue to look again, the cloud having expanded each time. At one point, a woman standing nearby cried out, “Both buildings have fallen down!” At the time, I thought she was overreacting or exaggerating.

When I got to the office, everyone was gathering in the conference room, watching the events unfold on TV. It was the first day for a new crop of interns, and for many of them their first day in New York City. This was not the welcome they’d expected. After a period of watching the news coverage in horror and dismay, we gathered our wits and got to work. We had to move fast, because this was a Tuesday, and we had to close that week’s issue the following day.

Was Al Qaeda really responsible? I could think of no better journalist to weigh in on this question than Robert Fisk, the veteran Beirut-based British correspondent who had not only written for the magazine but was one of the few Western journalists to have interviewed Osama bin Laden in person. I knew Fisk, somewhat; he’d recently agreed to contribute to a book I had just completed on the Israel-Palestine conflict. When we finally tracked him down, he was about to get on a plane to fly back across the Atlantic to London, but he quickly agreed to write for us. As I recall, Fisk said something like, “Look, we don’t know yet for sure who did this, but it has all the earmarks of an attack engineered by bin Laden.” And that’s more or less what he wrote for us when he filed the following day. I had been immersed not only in Middle East politics but also associated issues of Islamist extremism, so I’d already read Ahmed Rashid’s excellent, recently published history of the Taliban in Afghanistan. Ahmed had also written for the magazine before, so I tracked him down as well; he too agreed to write for us. And of course my fellow editors brought in many other great writers, some of them new, some of them previous contributors—people like Jonathan Schell, for example, who would go on to write a regular column pegged to 9/11, and Jeremy Scahill, author of the books Blackwater and Dirty Wars, which exposed US crimes in the forever wars that followed and have endured since 9/11.

The days and weeks after 9/11 would be some of the saddest, and most challenging, in my life. Like every other New Yorker, I was stunned to see fighter jets circling the skies over Manhattan, soldiers on the streets and in the subways brandishing automatic weapons. All over downtown, for weeks, we saw the sad, desperate notices pasted to the sides of every building and monument and window, pleading for information about missing loved ones who worked in the towers, or near them, and were missing. The stench from the World Trade Center, now a smoking ruin, spread all over downtown and deep into Brooklyn, the horror of it deepened by everyone’s knowledge that part of that stench came from several thousand corpses buried in the rubble. The death toll was shocking, and nowhere worse than among the city’s firefighters. Of the roughly two dozen from my local station in Brooklyn, for example, about half were killed that day.

Even the basic functioning of The Nation was threatened when, later on the same day as the attacks, WTC 7 collapsed. That building had housed our telecommunications network, so the magazine had to scramble to set up an alternative. For weeks after 9/11, we had only two computers with Internet service, so we set up a sign-up sheet and took turns at them, working together in a spirit of cooperation under siege.

It was a sad and terrifying period, but, looking back on it, I can say with certainty that it was The Nation’s finest hour in the three decades that I worked for the magazine. Why? Because we didn’t change. We continued to do exactly what we had always done: Report the facts, as best we could ascertain them. Tell the truth, and speak that truth to power, no matter who holds it or how unpopular or uncomfortable that truth is. I don’t at all mean to say that we were flawless. We made mistakes then, as we always have. And we argued over various issues, as we always have. But we held firmly to our general principles—the most crucial ones at that time being deep skepticism about the use of US military power abroad, and refusal, under any circumstances, to truck with flag-waving jingoism. All around us, seemingly smart people and worthy institutions were losing their heads. Not only was nearly the entire mainstream press soon braying for war against Iraq, but so were liberal magazines like The New Yorker and The New Republic.

The irony was that, unlike earlier periods of The Nation’s history when we didn’t have much company—at the height of the 1950s Red Scare, for example, when the magazine almost went broke and at one point had to scramble to find a printer that would work with us—in the months and years after 9/11, our circulation skyrocketed. From the summer of 2000 to approximately 2004–05, it jumped from about 100,000 to about 180,000. I think Americans, hungering for honest reporting about the world and the disaster we were creating in the Middle East, came flocking to The Nation because we were a media oasis, one of the few places telling the truth. And we should never forget that lesson, even if we sometimes have to pay a penalty: Stick to your principles. Tell the truth. Fight the power.