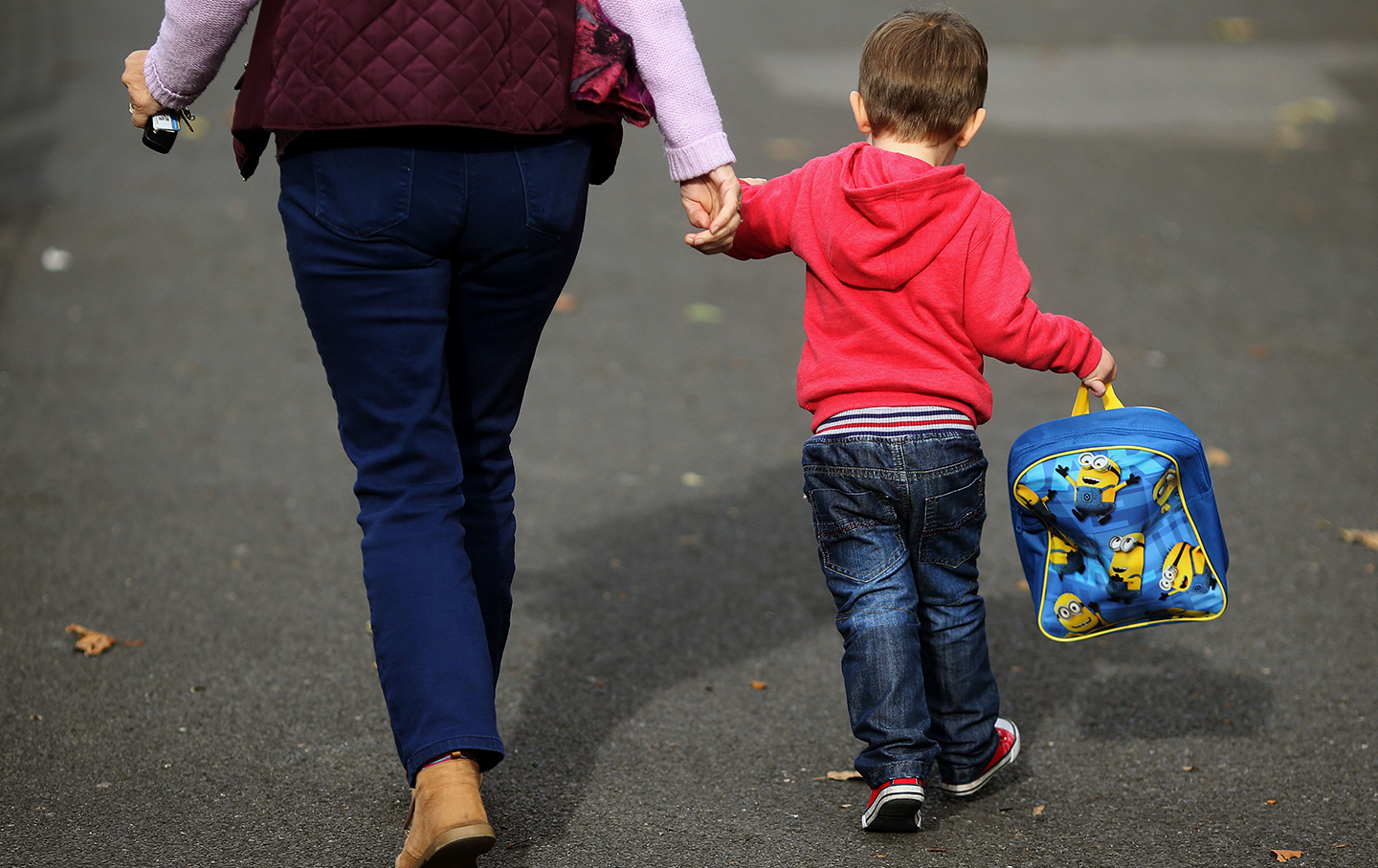 A woman and child walk with a backpack.

Our economy cannot function without child care. That simple fact has been brought into stark relief by the pandemic, which has forced parents across the country to choose between supporting their family financially and caring for their children.

In the Covid-19 economy, you can have a kid or a job. But you can’t have both. That may seem an exaggeration, but it’s not. With school districts implementing virtual or partial reopenings, many of the nation’s 50 million working parents have had to fill gaps in child care. Already, 13 percent of American parents have had to either quit a job or cut back their working hours because of a lack of child care.

This crisis isn’t new. For years, working families have struggled with the rising cost of child care and the difficulty of finding licensed providers.

The Department of Health and Human Services has said that affordable child care should cost no more than 7 percent of a family’s income. But there’s no state in the country where the average cost of child care meets that standard. In fact, a Center for American Progress (CAP) report found that child care takes up about 10 percent of an average working family’s income. Low-income families—who are the most likely to have seen a change in income during the pandemic—fare worse: Just four in 10 pay for child care, but those who do typically spend more than one-third of their income on it.

One cruel irony is that child care workers themselves—predominantly Black and brown women—are among the lowest-paid workers, have faced pay cuts as a result of the pandemic, and routinely struggle to pay for care for their own children while they care for the children of others.

Then there’s access. Before the pandemic, half the population lived in child care deserts—“areas with little or no licensed child care capacity,” according to the CAP report. Now, these deserts have become complete wastelands. More than half of licensed child care centers have closed as a result of the pandemic, many of them for good. CAP estimates that these closures could impact 4.5 million children, the majority of them from middle- and low-income families.

Our child care system is on the brink of collapse, and working parents and our economy are at a breaking point. Something has to give.

Fortunately, leaders such as Dorian Warren of Community Change Action (and a member of The Nation’s editorial board) offer a path forward. To start, they are advocating that lawmakers authorize an emergency investment of $100 billion to keep child care facilities operational for children of essential workers—and for those that have been forced to shut down, that they’re ready to reopen when it’s safe to do so. Some funds were included in earlier relief packages, but more are desperately needed. And any emergency infusion is only a stopgap measure—a bridge to a permanent solution, one in which every family has access to the high-quality child care they need.

At the same time, it’s important to remember what labor activist Ai-jen Poo recently wrote about all care workers, including child care workers: “How we take care of them now is one of the most important steps we can take to take care of us all.” Long-term investment in child care and better pay and benefits for child care workers, actions which the majority of Americans support, would help build a more inclusive economy. As it is, lack of access to child care prevents many Americans from achieving their full economic potential: Working families without affordable child care lose an estimated $28.9 billion in wages each year. With better access, more parents would be able to find and maintain the employment they need to support their families. Publicly funded child care can have an enormous impact on women’s earning potential in particular. When D.C. invested in universal pre-K, women’s participation in the city’s workforce rose by 10 percent. That’s good news for everyone: When women join the labor force, wages rise and economies grow.

Here’s the bottom line: Investment in child care can’t wait until after there’s a vaccine. When Democratic nominee and former vice president Joe Biden launched his economic recovery plan this summer, he spoke about making child care more affordable and treating child care workers with dignity. That’s a good start. But as details emerge, there is no shortage of advocates who will push for change if his plan falls short of what’s really needed.

As Senators Elizabeth Warren of Massachusetts and Tina Smith of Minnesota said in April, “We will not be able to rebuild our economy if this country’s child care system has collapsed beneath the economic burden of this pandemic.”

The coronavirus has exposed and exacerbated the child care crisis. May it also compel our elected officials to act—for working families and the economy.