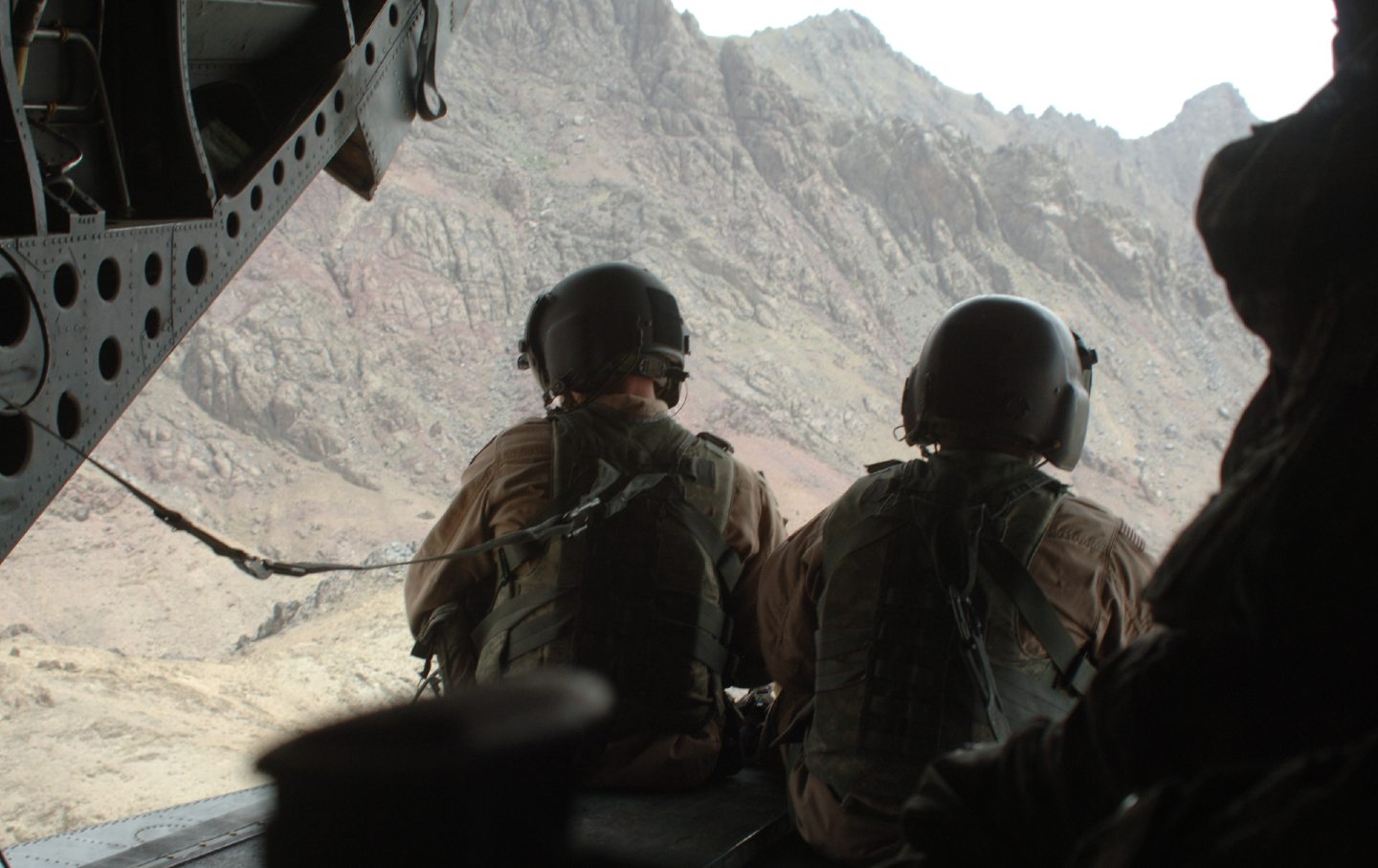 US Army Soldiers fly above the Andar province of Afghanistan after searching for Taliban members and weapons caches in 2007.

Once this pandemic passes, there must be a profound reckoning. I’m not referring to the abysmal performance of former president Donald Trump during the crisis; the election in November rendered the citizens’ judgment on that. No, there must be a reckoning with the profound failure of the United States’s domestic and foreign policies and priorities, a failure that was apparent even before Covid-19 exposed the catastrophic bankruptcy of our national security strategy.

Less than 30 years ago, with the end of the Soviet Union, the United States basked in the role of the world’s sole superpower. An establishment consensus quickly congealed: Scholars proclaimed the “end of history,” announcing that the US model—liberal democracy and market fundamentalism—was the ultimate endpoint of human progress. Corporate-led globalization would bring untold prosperity to the United States and spread it across the globe. America’s unrivaled military dominance would enable it to police an unruly world, spreading the blessings of democracy. Though partisan differences might still exist in emphasis and rhetoric, the consensus—and the overweening triumphalism—would be unassailable.

The results for the security of Americans have been disastrous. Under the rules rigged by corporations, globalization led to good jobs being shipped abroad, workers losing ground, wages stagnating, and insecurity rising while inequality reached staggering extremes. Trillions of dollars are devoted to building military power that is increasingly irrelevant to meeting the challenges of our time, while fundamental threats—catastrophic climate change, pandemics, mass migrations forced by failed states, and endless wars—have been slighted. Americans grow more and more insecure, life expectancy has declined, and an entire generation has been left mired in debt. And the United States remains an outlier among developed countries in its failure to provide basic shared security: universal health care, decent wages, paid sick leave, first-rate public education, and so on.

Americans elected Barack Obama and Donald Trump, in part, as outsiders who might challenge this course. But Obama fine-tuned the War on Terrorism –and extended it. And Trump promised to end the forever wars, only to embroil us deeper in them, while throwing ever more money at our already outsized military.

The Trump administration’s 2017 National Security Strategy statement—produced by those “adults in the room” that establishment voices expected would prevent Trump from undermining America’s place in the world—announced a major change of focus. The primary threat facing the United States, it declared, was no longer terrorism; it was the “revisionist powers” of China and Russia. A new Cold War rallied the entrenched interests and experienced strategists: Here was justification for a new arms buildup, new deployments to Asia and the Middle East, and the extension of NATO to the very borders of Russia.

The threats posed by catastrophic climate change and by “biothreats,” pandemics, and failed states received insufficient attention. Unlike the new Cold War, the existential threat posed by climate change was grist for partisan debate. The threats posed by pandemics, by the mass displacement of refugees, and by failed states were displaced to the back burner in the fight for money, contracts, and prestige.

Trump’s response to the coronavirus was disastrous, costing Americans precious time and a staggering number of lives. That failure, however, was partly built on a wrongheaded security consensus that still envelops the establishments of both parties.

What is needed now is a fundamental debate about a security strategy for the 21st century. We need a global economic strategy that defends America’s working people and ensures that the United States remains a center of invention and manufacturing. We should not wake once more to discover that our country no longer makes the things essential to our health or our safety. We need a security policy that focuses on the existential threats that loom ever larger: catastrophic climate change, global pandemics, a nuclear and cyber arms race no longer effectively limited by arms control agreements. We need greater investment in and attention to the capacity of our public institutions—and greater accountability for the private economic giants.

The presidential election did not provide the occasion for this reckoning. The fundamental failures of America’s strategy and priorities were largely ignored in the campaign debates and skirmishes. It will take assertive movements—a new generation demanding change—and an independent Congress driven by a coalition of progressive and transpartisan leaders to force the debate we need.

Surely the horrible human suffering wrought by the pandemic, and the economic collapse, makes it never more clear that such a reckoning is essential to the future security of every American.