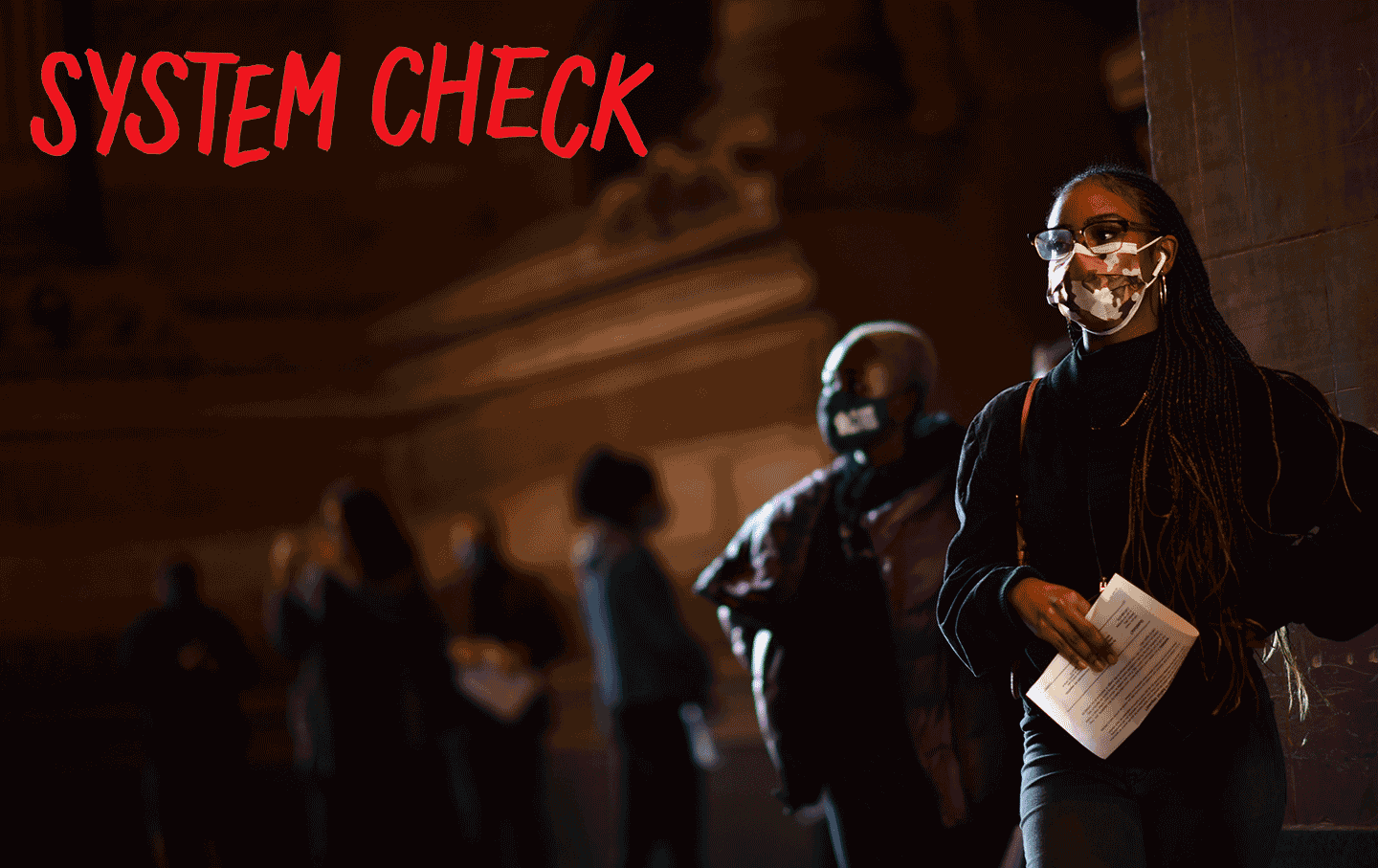 Welcome to System Check. On this podcast, we’re going to break down the big, unwieldy, seemingly immovable systems that structure our politics and our lives. In the 10 episodes in this season, we will delve into the history of these systems, and along with our guests, we will seek ways to move beyond or redesign these systems. (If you want to get our newest episodes when they drop each Friday, subscribe to our podcast on Apple Podcasts, Spotify, Google Podcasts, or wherever you get your podcasts.) In our first episode, your hosts Dorian Warren and Melissa Harris-Perry are focusing on the system at the top of everyone’s minds: voting.

Listen to the first episode of our new podcast.

More than 75 million Americans have already cast a ballot, but election watchers are warning that long lines, false information, and purposeful barriers may deter many Americans from exercising their right to vote. America’s convoluted voting system is deeply and purposely unfair to many Americans, especially African Americans, Spanish-speakers, caregivers, and those with the least education and the fewest financial resources. It’s time for a system check.

Sherrilyn Ifill, president and director counsel of the NAACP Legal Defense Fund, joins us to consider the long history of voter suppression in the United States and to outline how state laws, federal court decisions, and digital misinformation continue to depress voter turnout. After listening to this interview, we know you will want to learn more. Check out “Sherrilyn Ifill, Civil Rights Superhero” by Melissa Harris-Perry (Glamour, October 13, 2020); “Mark Zuckerberg doesn’t know his civil rights history” by Sherrilyn Ifill (The Washington Post, October 17, 2019); and the testimony of Sherrilyn Ifill before the United States House of Representatives Committee on the Judiciary Hearing on HR 1, the “For the People Act of 2019” (January 29, 2019).

Also in this episode, cohost Melissa Harris-Perry delivers the weekly “System Analysis” with a surprising take on the rationality of voting. She concludes by drawing on the wisdom of Professor Lani Guinier. legal scholar and a champion of voting rights and racial justice. Twenty years ago, as the 2000 election between Vice President Al Gore and Governor George W. Bush descended into a chad-hanging fiasco, Lani Guinier wrote “”Making Every Vote Count” for The Nation. Her analysis remains relevant today.

In the second half of the episode, we talk to Alicia Garza, co-founder of #BlackLivesMatter, founder of the Black Futures Lab, cofounder of Super Majority, host of her own podcast, “”Lady Don’t Take No,” and author of the new book, The Purpose of Power: How We Come Together When We Fall Apart.

Alicia Garza is insightful, impactful, and vulnerable in this interview you will not want to miss!

Transforming analysis into action, we give listeners three action items this week:

Be sure to keep listening until the end of the episode, because organizer Linda Sutton of Democracy North Carolina has an inspiring final word this week.

System Check is a project of The Nation magazine, hosted by Melissa Harris-Perry and Dorian Warren and produced by Sophia Steinert-Evoy. Support for System Check comes from Omidyar Network, a social change venture that is reimagining how capitalism should work. Learn more about their efforts to recenter our economy around individuals, community, and societal well-being at Omidyar.com. Our executive producer is Frank Reynolds. D.D. Guttenplan is editor of The Nation, Erin O’Mara is president of The Nation. Our theme music is by Brooklyn-based artist and producer Jachary. Special thanks this week to our guests Sherrilyn Ifill and Alicia Garza.