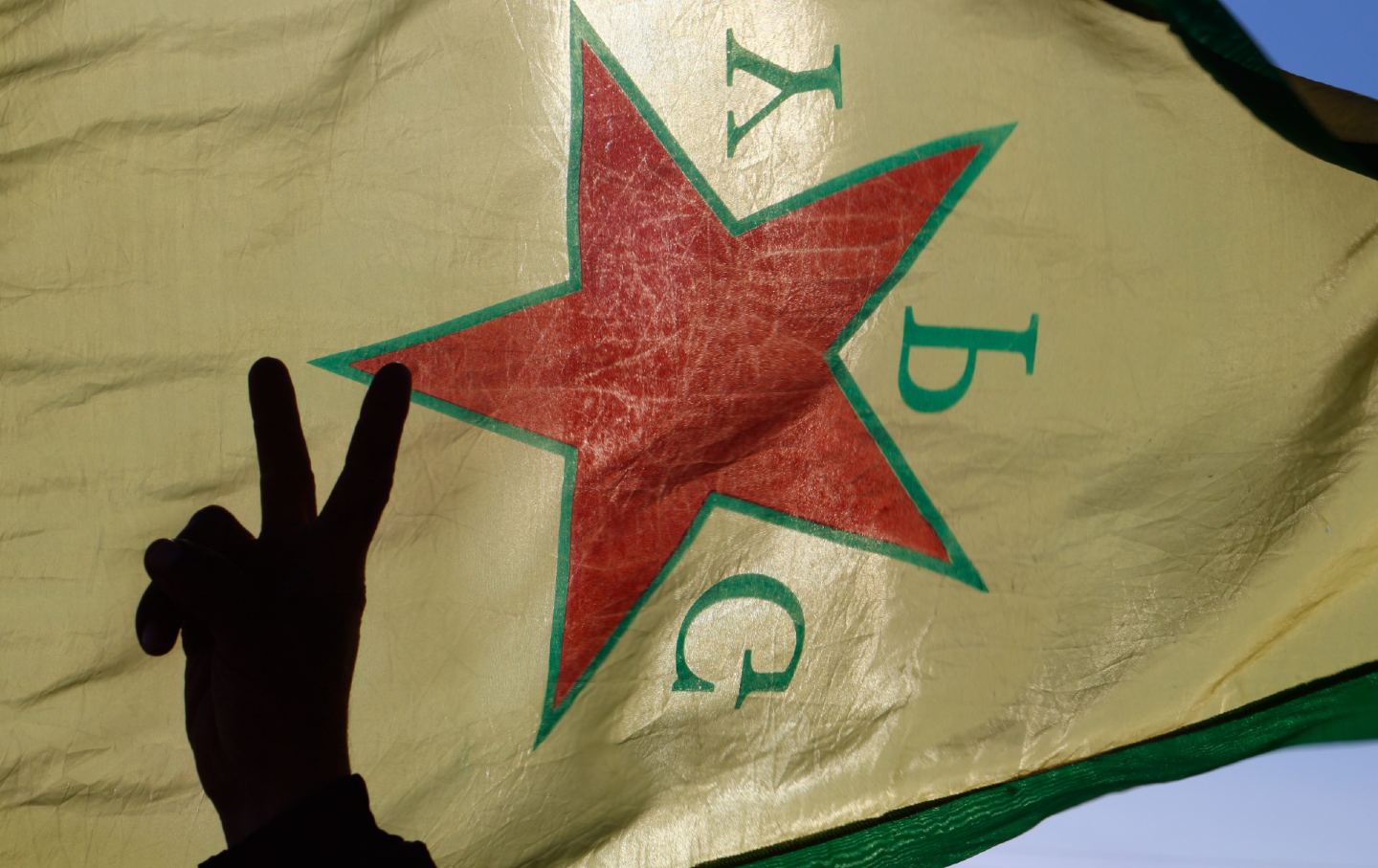 The silhouette of a hand indicates a “Victory” sign behind a Kurdish flag in Kobane, Syria, in February 2015. (Photo by Antonio Pampliega / picture-alliance / dpa / AP Images)

Turkish armed forces have controlled a strip of land in northeast Syria between the towns of Tell Abyad and Ras al-Ayn (Serekaniye in Kurdish) since October 9, 2019. Turkey, which has had a presence in northwest Syria since it invaded the Afrin region in January 2018, has split the territorial integrity of this Kurdish region, Rojava (“west” in Kurdish) or the Democratic Federation of Northern Syria, politically autonomous since 2013.

This essay continues our exclusive collaboration with Le Monde Diplomatique, monthly publishing jointly commissioned and shared articles, both in print and online. To subscribe to LMD, go to mondediplo.com/subscribe.

Turkey’s actions are a direct threat to the political and military alliance established by the PYD (Democratic Union Party)—the Syrian branch of the PKK (Kurdistan Workers’ Party)—and northeast Syria’s other main demographic groups, the Arabs and Syriac Christians. This alliance, the SDF (Syrian Democratic Forces), and its political wing, the Syrian Democratic Council (SDC), also have to reckon with the forces of Bashar al-Assad who still hopes to regain control of the whole region, from which he withdrew in 2012. Seven years after its creation, what remains of the PYD’s pluralist, democratic project?

We set out from the Newroz refugee camp in Derik, near the Turkish and Iraqi borders. A woman living there said she had fled six times since 2018: “My family and I are from Afrin. When the Turks came, we went first to Shabab, then toward Aleppo. From there we reached Kobane. Then my son found work in Ras al-Ayn. After the Turks attacked, we had to flee barefoot to Tell Tamr and now we’re here in this camp.” A man said he had left his small farm in Tell Abyad last autumn: “We were living happily. The political system worked well. Then the Turkish president sent planes to bomb us and all the Kurds left.”

Ethnic makeup to be changed

Recep Tayyip Erdoğan and Vladimir Putin signed a 10-point agreement in Sochi on October 22, 2019, ratifying Turkey’s presence in northeast Syria and forcing the People’s Protection Units (YPG), the PYD’s armed forces, to withdraw from Turkish-held territory. Since then, Turkey has been accused of driving out the Kurdish population and replacing them with 2 million Sunni Arabs who had fled from elsewhere in Syria to Turkey. “Erdoğan wants to change the ethnic makeup of the territory his army controls,” according to Abdel Karim Omar, foreign minister in the Federation’s autonomous government. “Before Turkey invaded in 2018, 85 percent of Afrin’s population was Kurdish. Now it’s 20 percent.”

Iraqis Want Iran and the US Out

How the US Media Demonizes Iran

The Truth Behind the Assassination of the South African PM

We can’t be sure if these profound changes mean the end of Rojava as a political entity. When the Turkish army and its Syrian militias—known as çete (gangsters)—tried to expand their territory, they met fierce resistance.

We set off from Qamishli for Kobane, which was where Kurdish forces first seriously defeated ISIS in January 2015. At a main checkpoint held by the federation’s security forces, we were redirected to avoid the M4 east-west highway, as it was too dangerous: Turkish military drones overfly it and pro-Turkish militias, based just 400 yards from the road, make regular incursions. On October 12, 2019, Hevrin Khalaf, an influential Kurdish politician, was intercepted on the M4 at Tirwazi near Tell Abyad and brutally killed by Turkish-backed jihadist militias.

The Trump administration’s announcement on October 6 of a US military withdrawal from the region opened the way for a Turkish invasion and left the SDF no option but to call for military support from Damascus. After the Sochi agreement, Syrian troops were deployed between Kobane and the Iraqi border, except for the Turkish-occupied enclave. The Syrian army has small military posts every six miles; according to people we spoke to, its role is mainly to discourage further Turkish expansion.

The Turks have put a price on the head of SDF military commander Mazloum “Kobane” Abdi, who said of the Syrian army, “It’s largely a politically symbolic presence.” He added that there is no other Syrian military presence in SDF-controlled zones. Throughout our journey we saw only the Asayish, the Arab-Kurdish SDF police, watching the roads. We asked Abdi about future relations between Rojava and Damascus, and he said the priority was a political agreement: “We want political autonomy to be written into the Syrian constitution and the SDF to be part of the defense of the whole of Syria. These are demands we won’t compromise on. Under such an agreement, defending the north of the country would be the SDF’s responsibility.”

‘We will not let Kurds lose their rights’

Would the Syrian government accept a change that would end decades of centralism and the quest for a single Arab national identity? Damascus has given no sign of this. We spoke to Polat Can, an SDF commander who led the operation to liberate the Deir al-Zor region, long under ISIS control. “Rojava will not revert to its pre-2010 state. We will not let the Kurds lose their rights, and we will not destroy the relations we’ve established with the Arabs and the Syriac Christians.” He suggested everything else was negotiable, including the autonomous entity’s name and how its borders would be controlled.

The Kurds feel bitterness and anger over how the enclave between Tell Abyad and Ras al-Ayn was abandoned to the Turks. This feeling is especially acute because of the lack of air protection. Abdi said, “The Russians have let Turkish planes bombard our civilians, children, and defense forces. They haven’t kept their promises. Nor has the US.” Polat Can’s verdict was starker: “The Turks are killing Kurds with European weapons. Their drones are Italian and their Leopard tanks are German. If we had an air exclusion zone that could stop our troops being bombed from the air, we would kick the Turks out of Rojava in a week.”

We reached Kobane after a six-hour detour via Raqqa on badly damaged roads. The many oil tankers on the road made the air almost unbreathable. Some of the cheap, low-quality crude oil extracted in northeast Syria is used by the local population and the rest is sold by Damascus through intermediaries. The autonomous government runs public services and funds infrastructure projects through oil revenue and taxes on goods crossing the Iraqi border in both directions. But oil extraction is not at full capacity. Ziad Rustem, a member of the autonomous government’s energy commission, told us, “Only 25 percent of oil wells in northeast Syria are operating. The rest have stopped because of the war and the embargo on Syrian oil.”

Raqqa, the ISIS capital from 2014 to 2017, is now SDF-controlled. The city was badly damaged by fierce fighting, but reconstruction has begun. In the center, where ISIS used to display human heads on stakes, there are huge letters spelling “I love Raqqa.” ISIS still has a support base in this Arab-majority region and cells regularly carry out operations, including suicide attacks. But the city seemed relatively calm. When Erdoğan invaded the north, he counted on an Arab uprising against the Kurds. It hasn’t happened.

Brainwashed against the Kurds

Polat Can explained, “The Arab clans in Deir al-Zor told us, ‘Don’t bring the regime back here. You’re Kurds and we don’t like you, but at least you’re Sunnis—we can work with you.’ The Syrian regime used to brainwash the Arab population against the Kurds by telling them we’re Zionists, atheists, capitalists. But in the regions that are almost 100 percent Arab, there have been no uprisings against the SDF.” 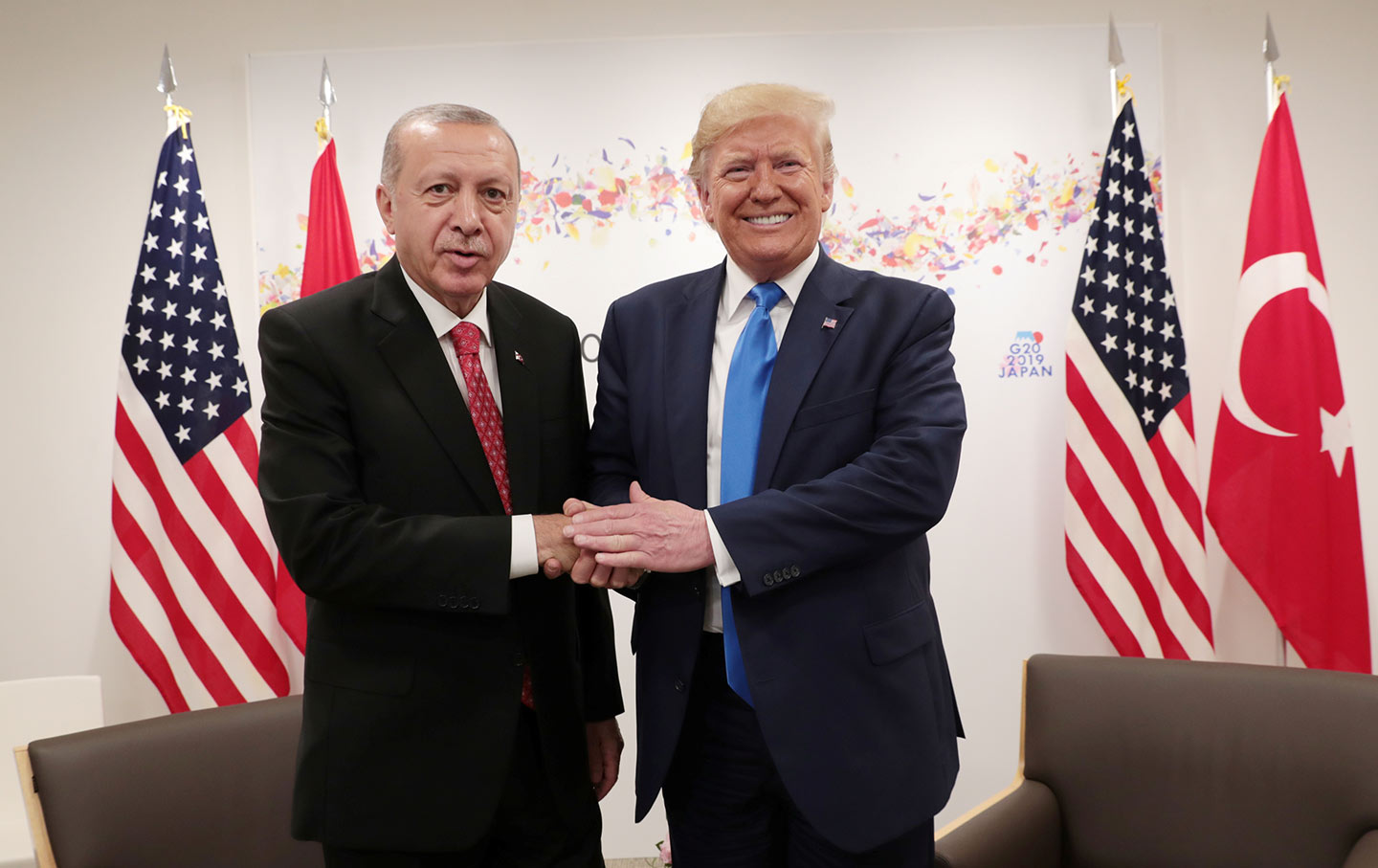 The recent Turkish invasion brought together Kurdish groups that used to oppose PYD dominance. Nari Mattini, a longtime opponent of the SDC, has now joined them. Mohsen Tahir, a member of the Kurdish National Council (ENKS), created at the instigation of the PDK (Democratic Party of Kurdistan), which is on good terms with Turkey and is intended to counterbalance PYD-PKK influence in the region, now admits that the priority is Kurdish unity to stop ethnic cleansing. That unity will depend on how relations between the PYD and the PDK develop; currently the PYD will not allow any other military force on the ground in Rojava.

Do the Kurds trust the Russians more than they trust the United States? Abdi told us that, for now, “Moscow is working on a solution between the Kurds and the Syrian regime.” But he and other prominent Kurds know Russia and Turkey made a bargain over Rojava that benefited the Syrian government. “Initially, Russia ‘gave’ Afrin to Turkey in exchange for Homs, Ghouta, and a small part of Idlib for the Syrian regime. Then it ‘ceded’ Ras al-Ayn and Tell Abyad to Turkey in exchange for another bit of Idlib.” The Kurds could be the biggest losers in these trades.

It was cold and wet in Kobane, and reconstruction work in the town was on hold because of fears of another invasion. In 2014 the invader was ISIS. Kobane is now threatened by the Turkish army and its allied militias, some including former jihadist fighters. The inhabitants, convinced that war was imminent, were digging tunnels to withstand attack. If it happens, the fate of Kobane might determine Rojava’s fate too.