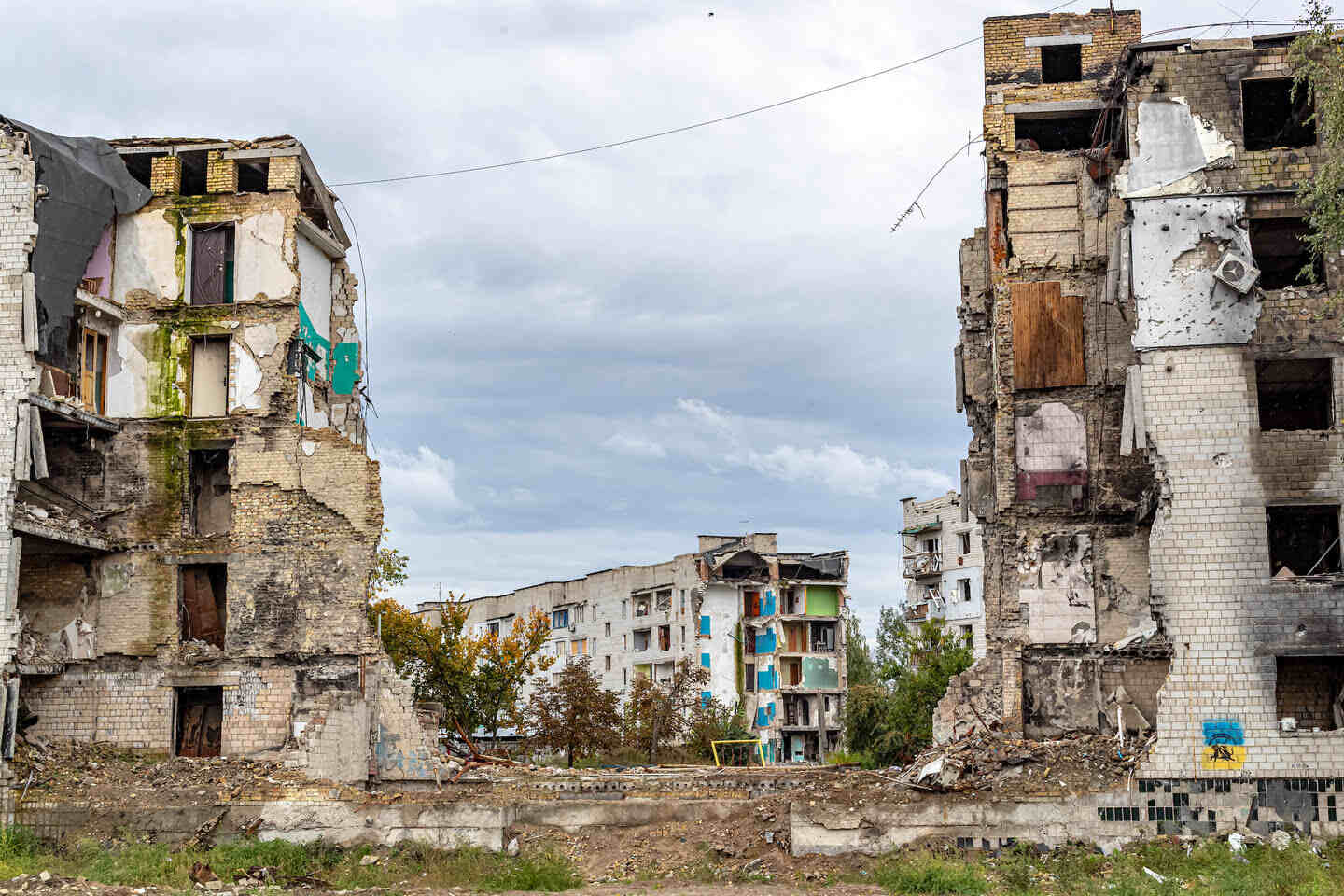 orodyanka, kraine—Halina Egorovna has placed every bucket, pot, and pan she owns around the floor of her one-bedroom apartment. Sheets of plastic line her walls and her couch, but the floor is still soaked. A cold autumn rain drenched Kyiv Oblast the previous night, pouring rain through the holes of her building’s roof, and leaking water into her apartment.

“Do you see how we live?” she says to me in Ukrainian, beginning to weep. “No one helps us, they only bring promises.” 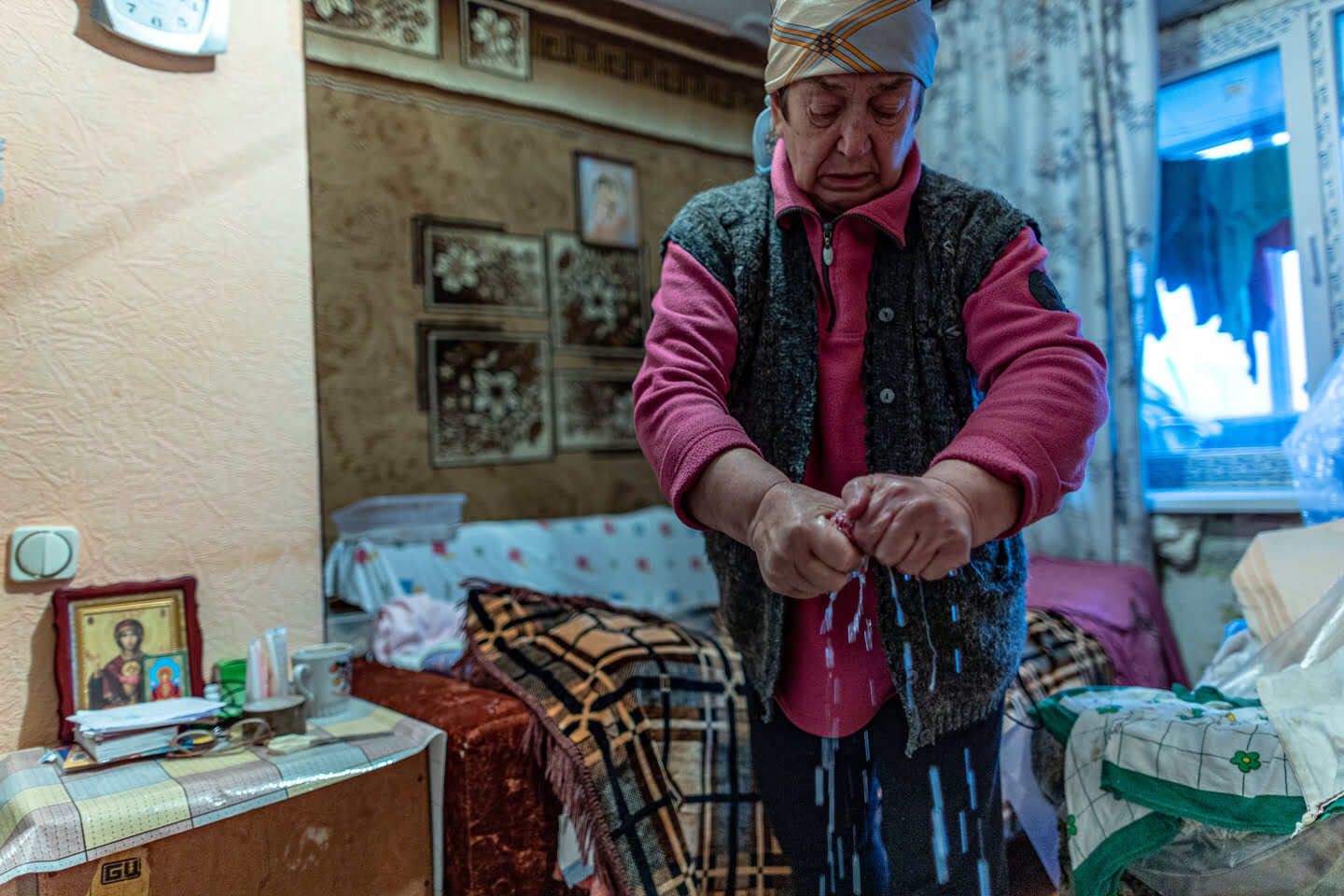 Halina squeezes water out of the cloth she used to sweep from the floor of her living room. An all-night rain flooded her apartment and apartments below hers in Borodyanka. (Vudi Xhymshiti)

For the 73-year-old pensioner and resident of Borodyanka, a town roughly 50 kilometers to the west of Kyiv, the rain and the frustration it brings is nothing new. Ever since Russian forces overran the town this past spring and unleashed violence that left virtually no structure untouched, rain has flowed into the five-story apartment building that Egorovna calls home. Despite Egorovna and her neighbor’s pleas for assistance, government authorities have been slow to begin repairs on the damaged building. With winter quickly approaching, residents throughout Egorovna’s building are increasingly worried that the freezing weather will make an already precarious living situation unbearable.

This predicament is not just plaguing Egorovna’s building. Homes remain damaged across countless villages and towns in Ukraine. People with nowhere else to go and limited understanding of where to receive help are facing the prospect of enduring the long winter without adequate shelter. Meanwhile, Russian forces have continued to strike Ukraine’s energy infrastructure in an apparent bid to weaponize winter against the civilian population. Recent missile attacks have destroyed or damaged an estimated 40 percent of Ukraine’s energy grid, creating a situation where millions of people will potentially be without heating amid temperatures that regularly drop below freezing. Despite the government’s efforts to prepare for the cold months by stockpiling gas reserves and developing temporary housing programs, Russia’s destruction of apartments and homes is affecting countless citizens, with the elderly and impoverished, unable to move easily, most at risk. 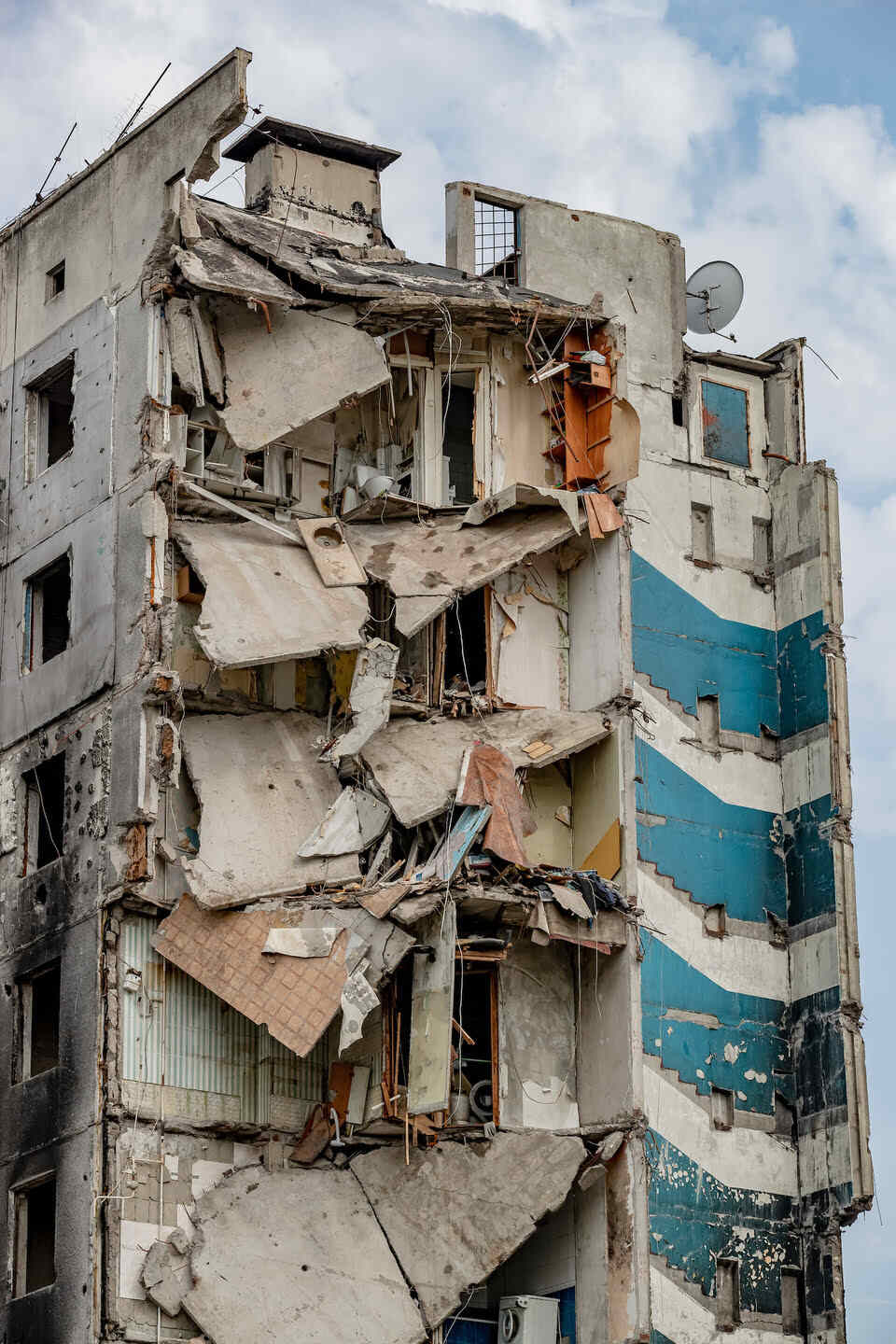 “I’m very worried about winter, no one has done anything and I’m very afraid,” Egorovna explained while wringing water out of a towel she used to dry her floor. “We’ve asked for help many times and nothing has happened!”

Her apartment block, number 425A, was damaged during the Russian assault on her town in late February and early March. Before the start of this war, Borodyanka had a population of roughly 13,000 people. The town was subject to some of the heaviest Russian bombardments in all of Kyiv Oblast during the initial stages of the February invasion, resulting in the destruction of an estimated 600 buildings and 711 individual apartments. Hundreds more were, and still are, in need of repairs. At least 156 civilians, including seven children, were killed during the attacks, and 28 more remain missing. At 425A, a state-owned housing block situated between numerous burnt-out and collapsed apartment blocks along the town’s main road, dozens of windows were blown out, interior walls collapsed, and its roof was riddled with holes from Russian artillery and missile strikes exploding nearby. 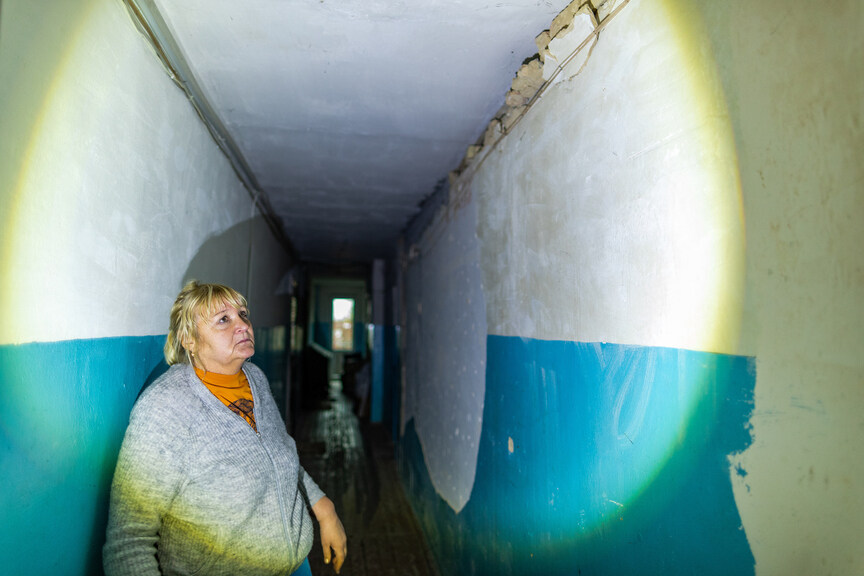 “I’m worried this wall will collapse,” another resident, Olha Kulish, told me, pointing to a waterlogged wall separating her neighbor Nina Petrova’s apartment and her own. The water from the hole in the roof was leaking into apartments on the third floor. “We’ve placed these sticks here to hold up the wall.”

Kulish is a 64-year-old retired veterinarian originally from Kyiv. She is considered a hero in this block, after she risked her life to care for eight people during the Russian assault and occupation eight months ago. Braving frequent incoming shelling, Kulish cooked food on an open fire outside the building’s entrance, and brought it to her hungry neighbors. When electricity, heating, and water were cut off, Kulish searched the town for supplies to bring to the building’s immobile elderly residents.

By the end of March, Russian forces had begun retreating from Kyiv Oblast, leaving nothing but physical and mental scars on the town and its remaining residents. 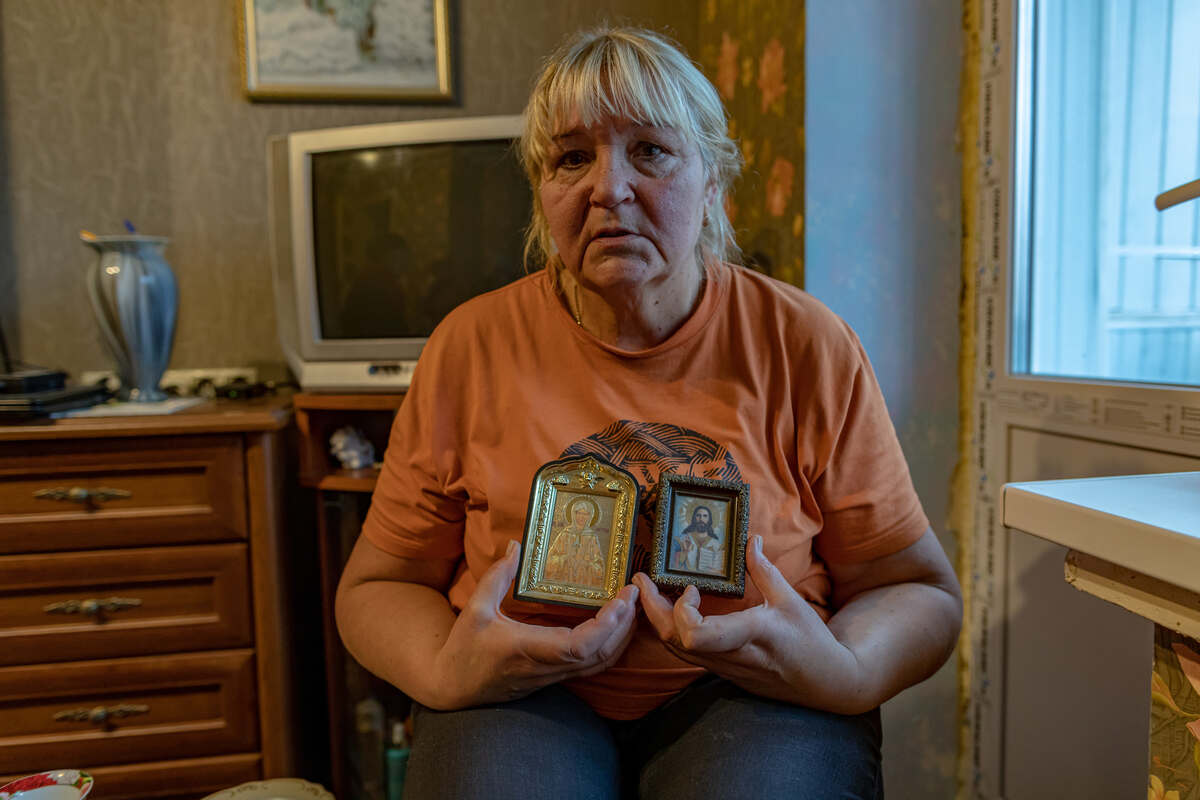 Olha Kulish holds up religious frames that she and her friends used to pray. (Vudi Xhymshiti)

“We are learning how to live anew, as if we were born again into a life of pain, blood, and screaming. I was near the missile attack, and afterwards, my head started to feel heavy. It’s true, we’ve changed,” explained Egorovna.

Through spring and summer, Ukrainian government representatives began to visit 425A to document the extent of damages. “People from the government have said that this building and another near here are the most difficult to fix, so they will do it at the last moment,” explained Tatiana Kitchak, a 63-year-old resident of the building. “But the last moment has arrived, winter is coming, and now they say there are no workers, no money, no materials, and we don’t even have a project right now.” The Borodyanka City Council is responsible for overseeing the building’s repairs, but it relies largely on financial assistance from the central government in Kyiv as well as international donors and can’t operate unless it has the necessary resources. 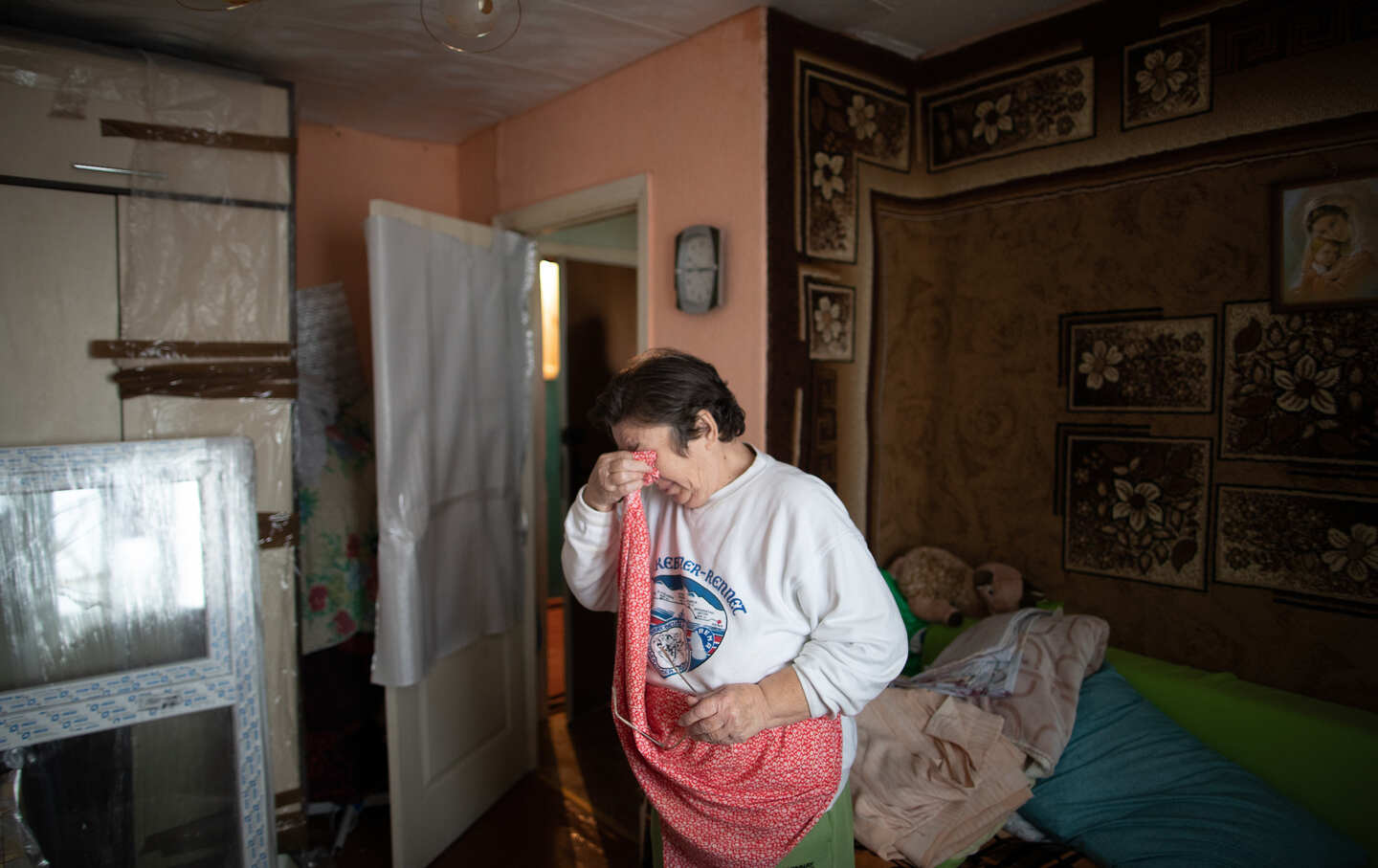 Halina, 73, weeps while she tells the story of the Russian bombardment in early March. (Vudi Xhymshiti)

“We are still preparing for winter and our first priority is to fix the roofs,” explained Georgiy Yerko, a member of the city council. “At 425A, we need to repair almost all of the building. It’s not just the roof the rocket damaged, but the destroyed apartment on the fifth floor as well. We’re hoping Kyiv will provide some support, because in our budget we have almost no money.” The council itself is currently operating out of a local school after its office building was destroyed in the attacks.

But residents are harder to relocate, and damages are devastating. Ukraine estimates it will cost $50 billion to repair all residences damaged nationwide since February 24. Thus far, the United States has provided $271 million in “winterization” aid, and Kyiv has allocated $75 million for winter repairs. The Ministry of Development of Communities and Territories of Ukraine has helped develop a camp of temporary homes in Borodyanka, funded by Poland, but for residents of 425A, the bureaucracy simply is not moving fast enough. 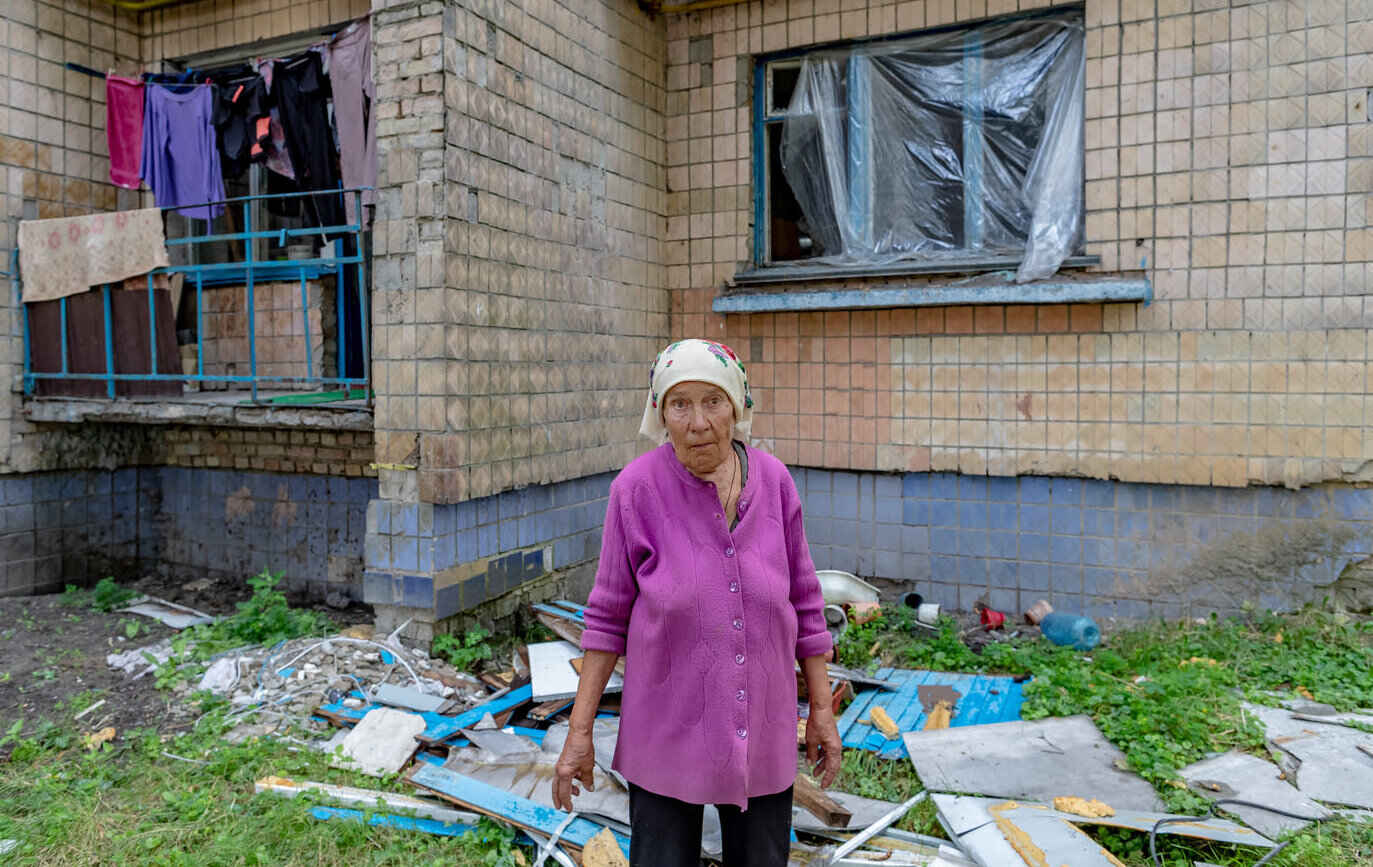 Russian warplanes flew and dropped bombs in Katerina Pirohova’s neighborhood. Airstrike shockwaves destroyed her house’s structure, and the windows went off, including doors inside the house. She’s worried about the winter the most. (Vudi Xhymshiti)

“It’s been more than half a year since the Russians left this area, and we need help but everyone says we don’t have money,” explained Egorovna. “How much longer will we have to wait?”