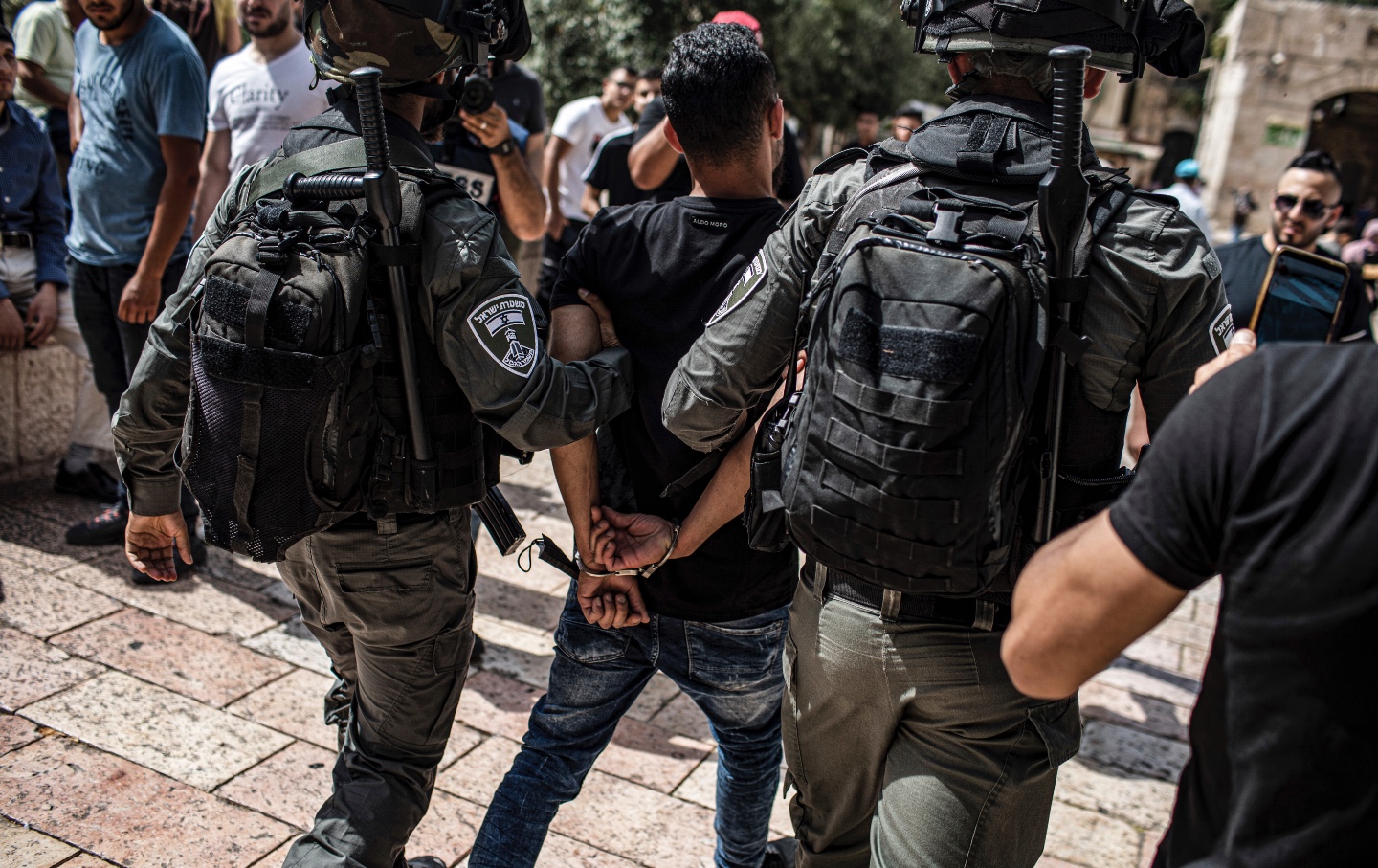 On Sunday night, the Israeli police announced the launch of a massive arrest campaign against Palestinians who took part in the latest uprising to resist Israel’s colonial project (the police charged them with participating in “riots” and online “incitement”). Within hours, police had begun raiding houses, arresting 165 protesters as of earlier today—a sweep they are expected to continue over the next few days as thousands of Israeli police officers, border police, and secret service members move to arrest some 500 protesters. Most are expected to be Palestinians, according to Israeli media. This campaign follows the arrests of 1550 others who were arrested in the past two weeks, of whom between 70 and 90 percent are Palestinian.

Though we’ve seen numerous videos in recent weeks documenting Jewish mobs roaming the streets in mixed cities, attacking Palestinian homes, lynching a resident of Ramleh, throwing stones and shooting at Palestinians, killing a resident of Lydd, the force of the campaign is clearly aimed at Palestinian citizens. In the words of Israeli police, this campaign aims to “settle the score” with the “Arab” population in Israel. Indeed, just as each war on Gaza has a name, this campaign has a name, too: “Law and Order.” And as with those code names and the various euphemisms that come attached to them—like “Israel has a right to defend itself—“Law and Order” is clearly a pretext to continue the state’s aggression against Palestinians.

This massive arrest campaign aims at crushing the uprising by disciplining those who stood up to Israel’s colonialism. For the first time in decades, Palestinians across historic Palestine managed to unite, joining together in struggle. But the state prefers it when Palestinians inside Israel endure their oppression and subordination in silence. So its police forces have begun terrorizing families and neighborhoods, aiming to deter others from protesting. Moreover, forcing Palestinians to divert their energy toward organizing around arrestees drains the movement of momentum. These are the same tactics Israel employs against Palestinians in the West Bank and Jerusalem, where hundreds have been arrested in recent weeks.

As the arrests ramp up, activists I spoke to in Palestine fear that Israel will arrest many minors. Indeed, on Monday, Israeli police arrested an 11-year-old boy in Jerusalem; his sister was filmed crying, pleading for his release. Activists also fear the campaign will target working-class  young men, who are not necessarily experienced with interrogation and are not well enough “known” as activists to draw attention.

And once arrested? The hostility and racism of Israeli police toward Palestinian citizens has been well documented by local human rights organizations. We can imagine the horror and humiliation these detainees will endure during detention and interrogation.

The Nakba Is Now

Saree Makdisi and The Nation

I Will Not Be Silenced Because I Demand Justice for Palestine

When you live in a country that is against you, you can’t rely on constitutional institutions for protection, because these too, are against you. You are left alone, and you have no choice but to fight back.

Palestinians understand this very well, and this is why they are organizing to support detainees and their families. Lawyers across Palestine are volunteering to defend them, and people are organizing to protest outside courts during the arrestees’ court hearings. As draining as this may seem, we believe it is our duty to stand by each other and not leave anyone behind.

But that is not enough. There needs to be a global outcry, because the more that Palestinians stand up for their rights, the more they will be crushed.

Following the news of the mass arrests, my partner asked me how Israel could pursue such a flagrant policy of abuse amid the rising global outrage over its actions in Gaza. I believe Israel is so intoxicated with power that it doesn’t really care. This has long been the logic of the state: Everything can be solved with force, and if that doesn’t work, then try more force.

None of this is about “law and order.” Nor is this a story of a “clash” between a state and its citizens. This is part of the continued aggression and suppression of Palestinians, everywhere.

It is time that people stop talking about the condition of Palestinians within Israel as an “internal” matter, a simple case of “civic strife.” We are integral part of the struggle against colonialism. Denying our right to define our aspirations for justice will not change them.