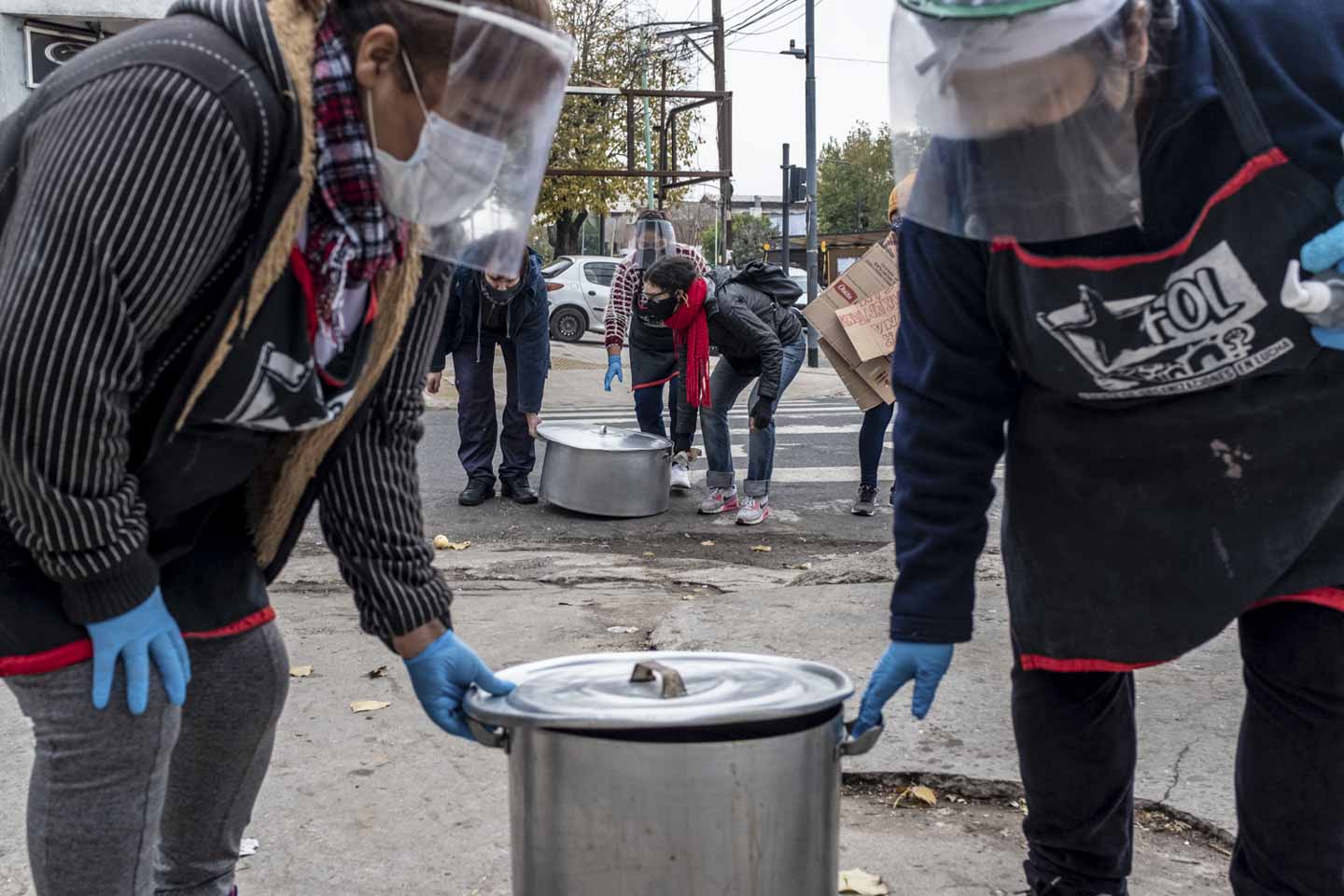 uenos ires, rgentina—On a recent morning, Juana ran to the corner of Cobo Avenue and Curapaligüe to make the noon demonstration. As a resident of Villa 1-11-14, the second most populous slum in Buenos Aires, Juana has seen firsthand the grave danger the coronavirus crisis poses to Argentina’s poor and disenfranchised: The cramped and crowded housing of the city’s poor has turned into a virus incubator; the hand-to-mouth existence of the slum’s residents has forced people to continue working despite the threat of the pandemic; and the lack of access to adequate health care that existed before the crisis is now exacerbating the deadly situation. That’s why Juana turned out on May 26 along with her neighbors and a coalition of social organizations, doctors, and activists for a protest against the government’s response to the crisis.

This project has been supported by the Pulitzer Center and Revista Anfibia.

So far, Argentina hasn’t been hit as hard as some other countries in Latin America: Mexico, Peru, Colombia, Chile, and especially Brazil, with its over 3 million cases, are all facing worse outbreaks. But already with nearly 250,000 cases and over 4,000 deaths, Argentina’s caseload continues to climb. And according to Juana and the other women of Villa 1-11-14 I interviewed for this story, the government is not doing nearly enough to stop the virus’s spread. 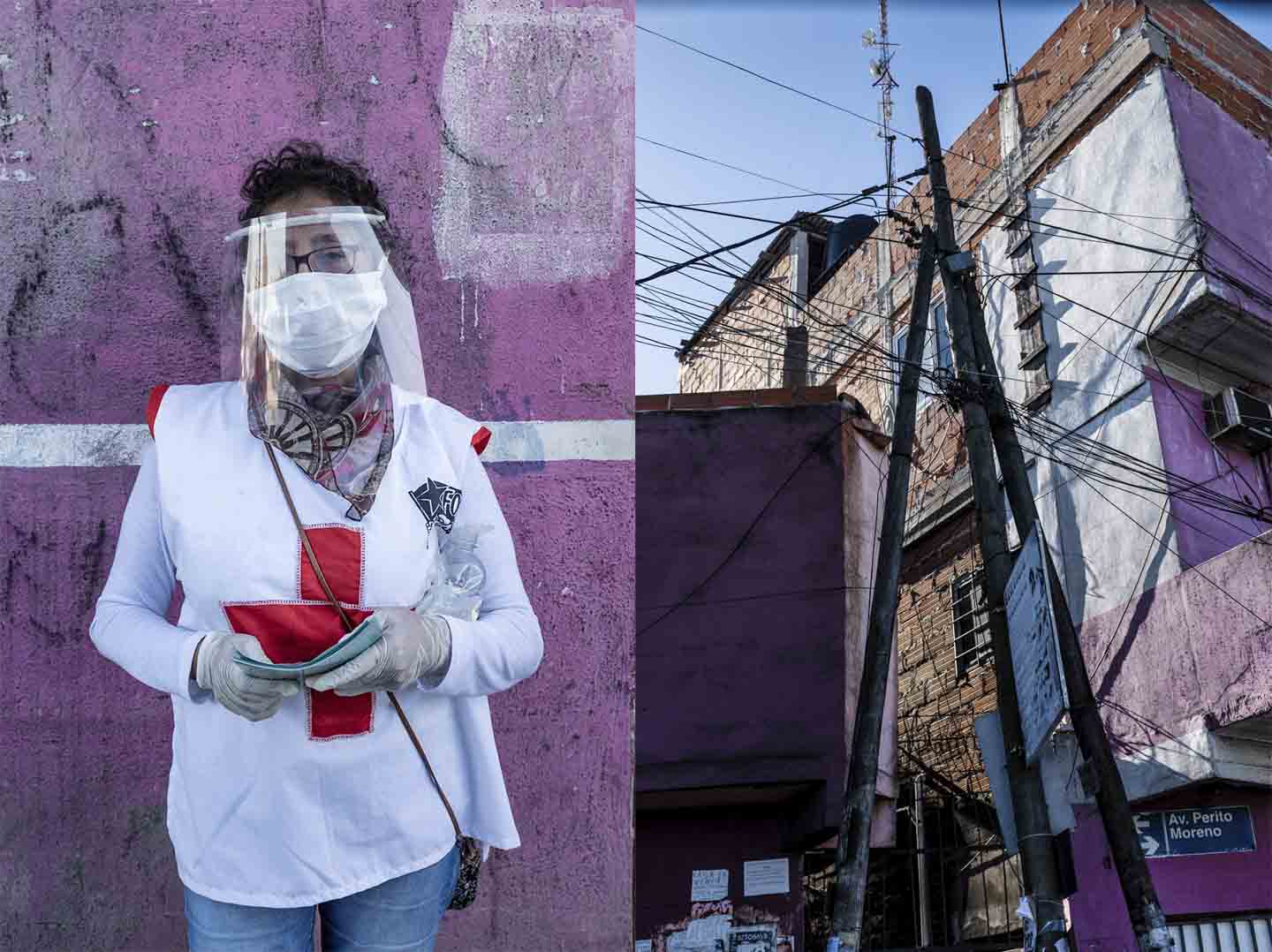 Juana, 51 years old, from Peru. She has lived in Argentina for 20 years. (Anita Pouchard Serra) 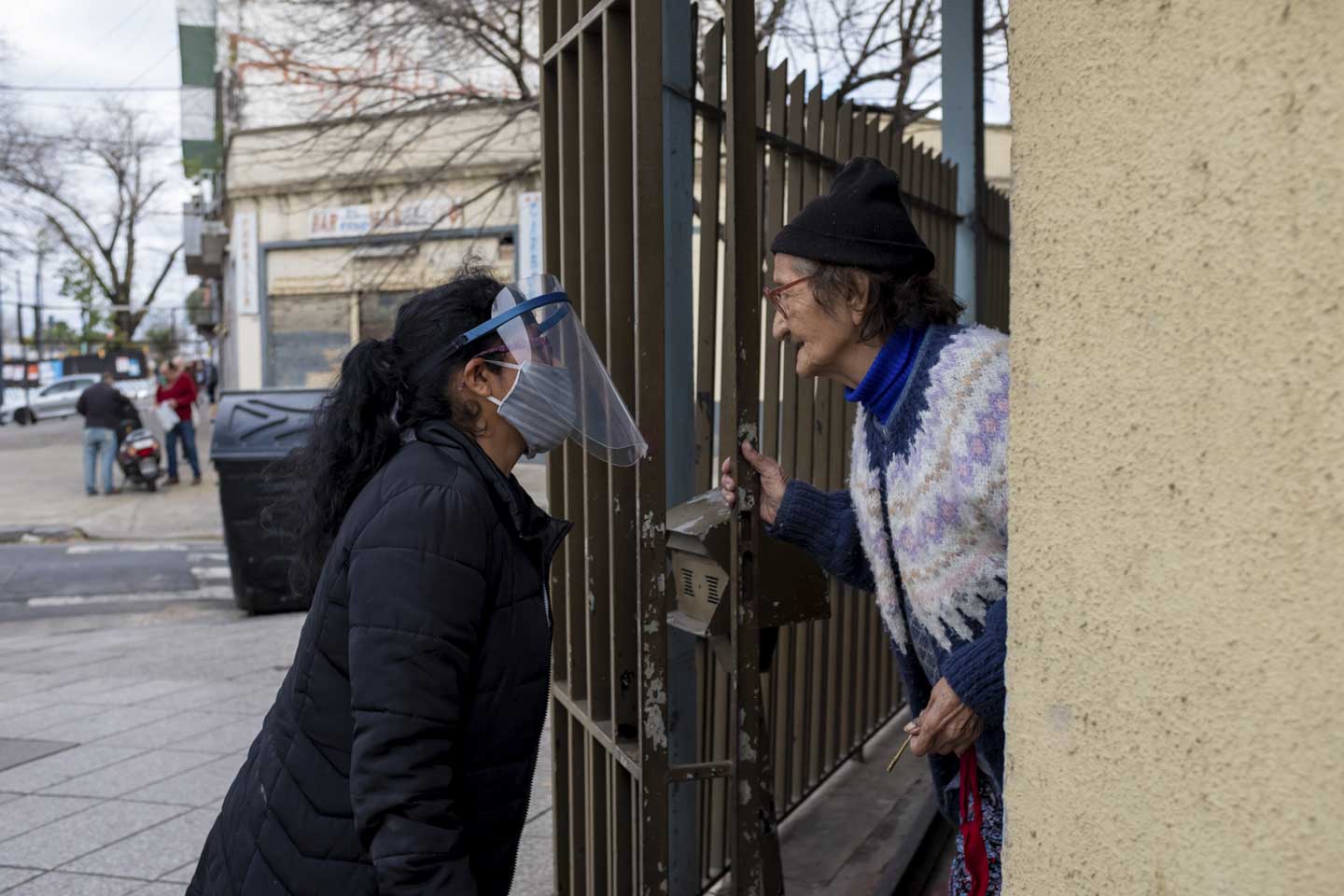 Juana has lived in the Villa since she immigrated from Peru 20 years ago. She’s now 51, and serves as a health promoter for the organization Frente de Organizaciones en Lucha (roughly, “The united front of organizations in the struggle,” or FOL). When she joined FOL, four years ago, she says she discovered “what it means to mobilize for a protest, to fight for others, not just for ourselves within the organization,” an attitude that drives her work for the organization’s “Berta Cáceres” soup kitchen on Francisco Cruz Avenue, a stretch that marks the eastern boundary of the slum. Every day at 11:30 since the quarantine began, people line up around the block to receive food rations—one hundred families are currently receiving rations from this kitchen, with another hundred on the waiting list. For her part, Juana walks the line, handing out information, talking to neighbors, and trying to see who is at risk and how to help them. 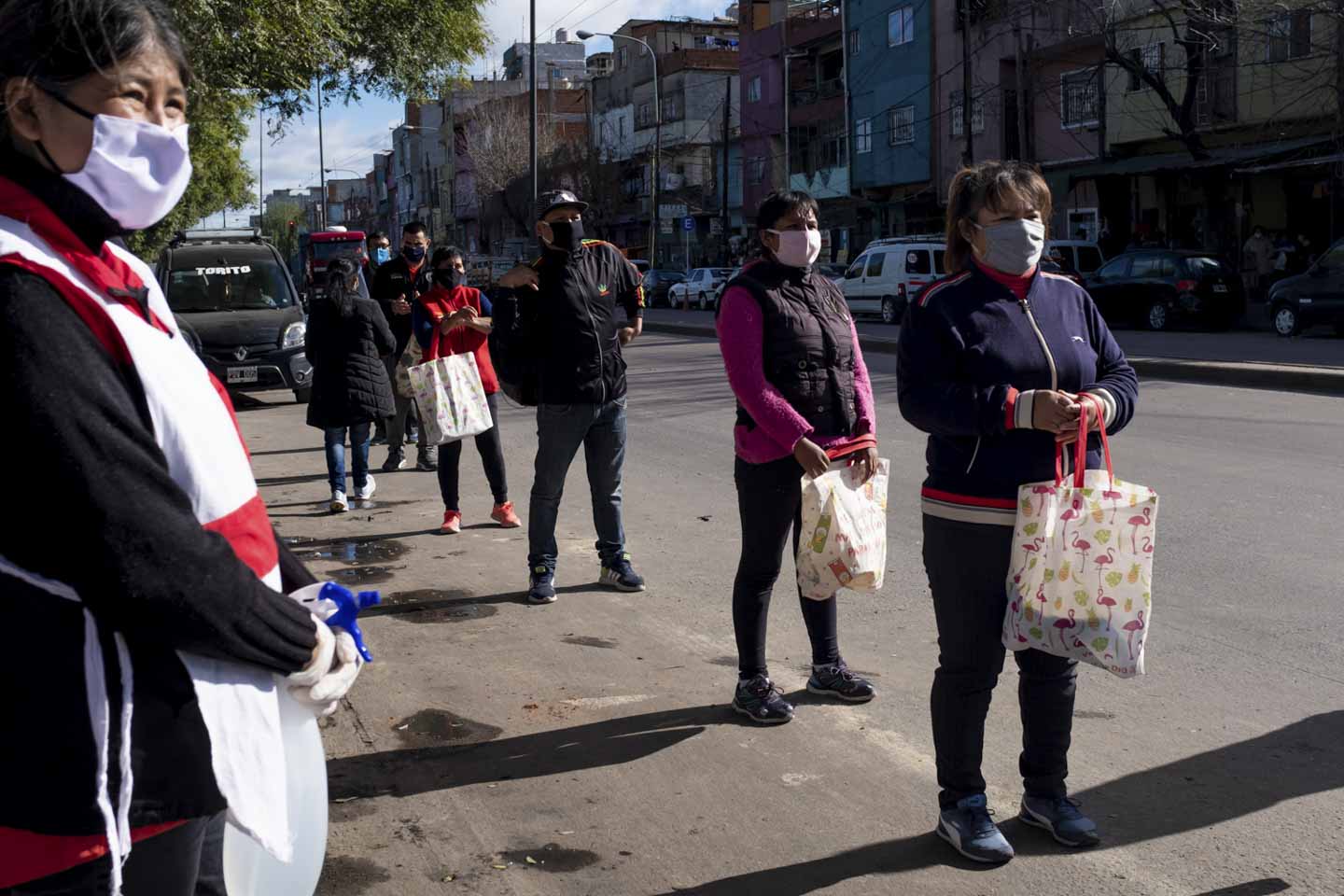 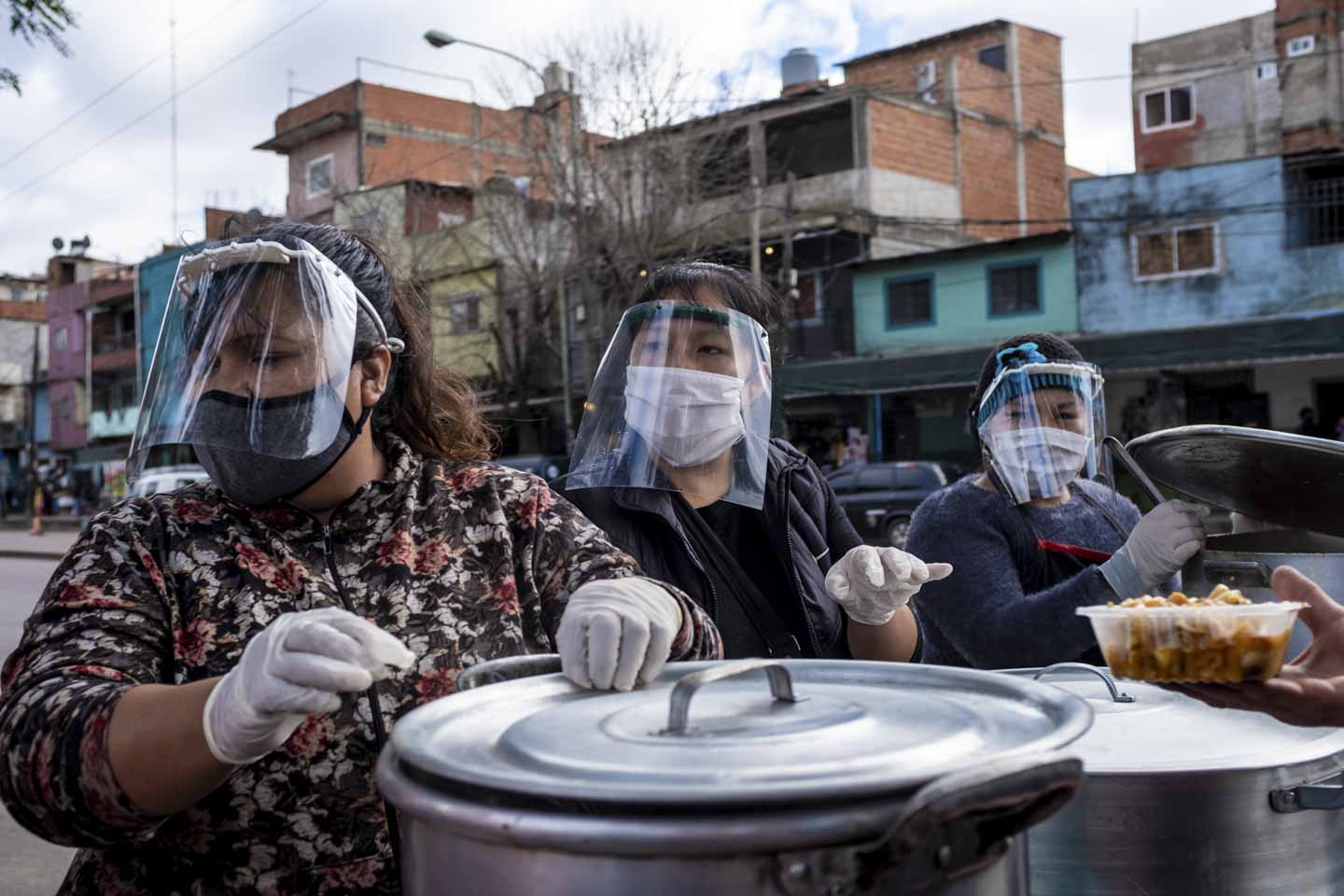 Patricia stands at the kitchen’s door—she’s responsible for making sure everyone gets their rations in an orderly fashion. Like Juana, she’s a migrant: She arrived from Bolivia four years ago and joined FOL because her sister was already a member. Now, the organization represents her in its Migrar no es delito (“migration is not a crime”) campaign, which fights for the rights of migrants, securing papers and fighting deportations. Every Tuesday she does volunteer work in the kitchen’s dining room, carrying out all the little tasks needed to keep this solidarity machine running: cooking, receiving produce, overseeing the line. Since the coronavirus made inroads in the neighborhood earlier this year—Villa 1-11-14 has seen some of the highest infection rates in the country—she’s been working twice or three times as hard to cover for her companions who have been infected or who have had to isolate themselves. 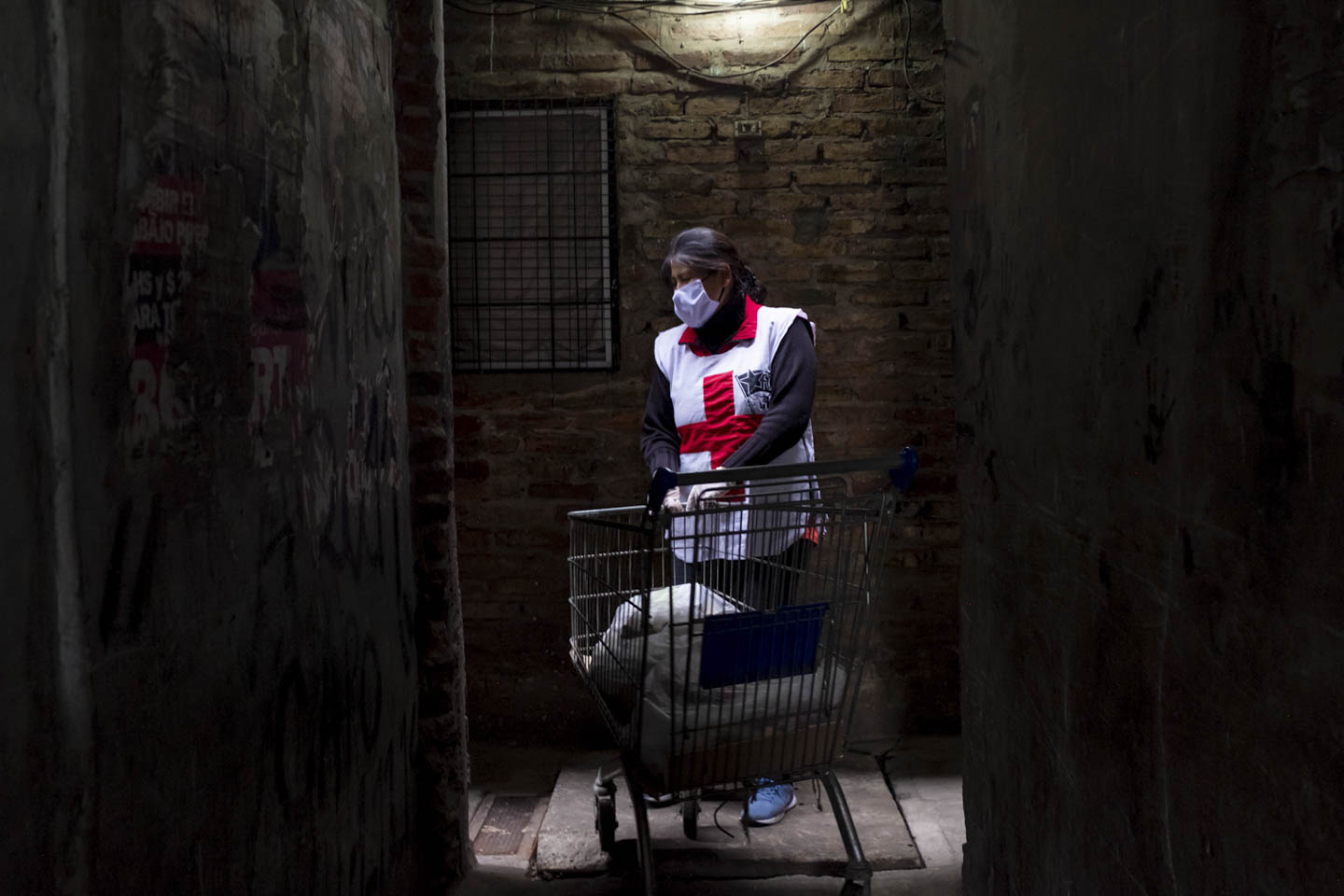 Yoli, in one of the dark and narrow corridor of the Villa, delivering supplies to those homebound. (Anita Pouchard Serra) 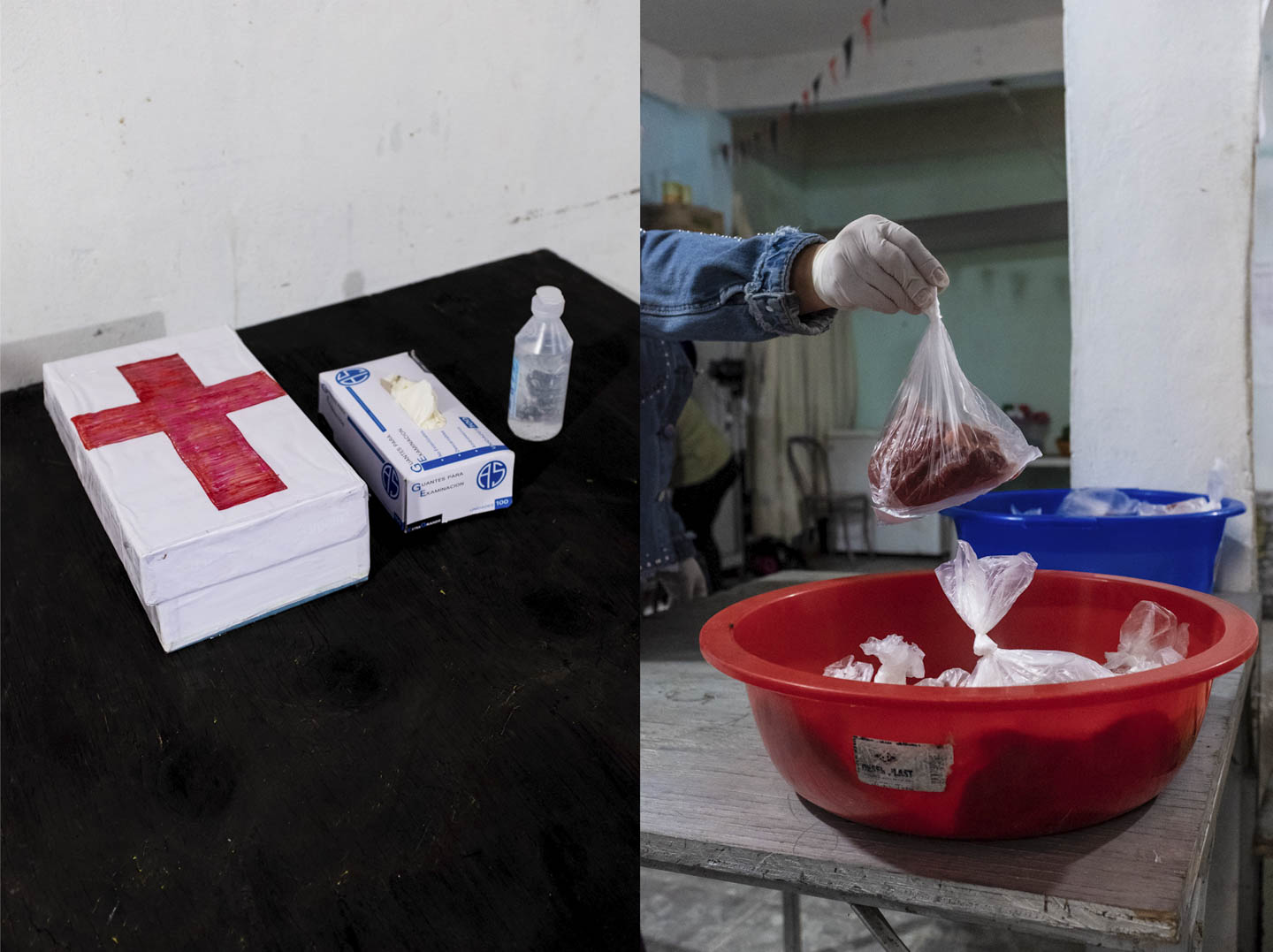 In the “Las guerreras del FOL” soup kitchen, a volunteer portions out a daily allotment of meat for a small family. (Anita Pouchard Serra)

There are families in the line who have never set foot in a soup kitchen before, but with savings exhausted they now have no other option. The fund the government set up to help workers in the informal sector, the Ingreso Familiar de Emergencia, requires citizenship or naturalization papers, and many in this slum have been able to get any relief through the fund, even with all the right papers. According to a survey by Amnesty Internationa, the Center for Legal and Social Studies, and the Migrar no es delito campaign, among others, 58 percent of migrants surveyed were out of work and left with no source of income when the lockdown began in March of this year.

“Before, they saw us as lazy, saying that we live off funds from the government,” says Ana, an FOL representative in the Riestra section of the slum who immigrated from Peru 10 years ago. But now, with little help coming from the government, it’s the people of these poor neighborhoods who are coming to their own rescue. 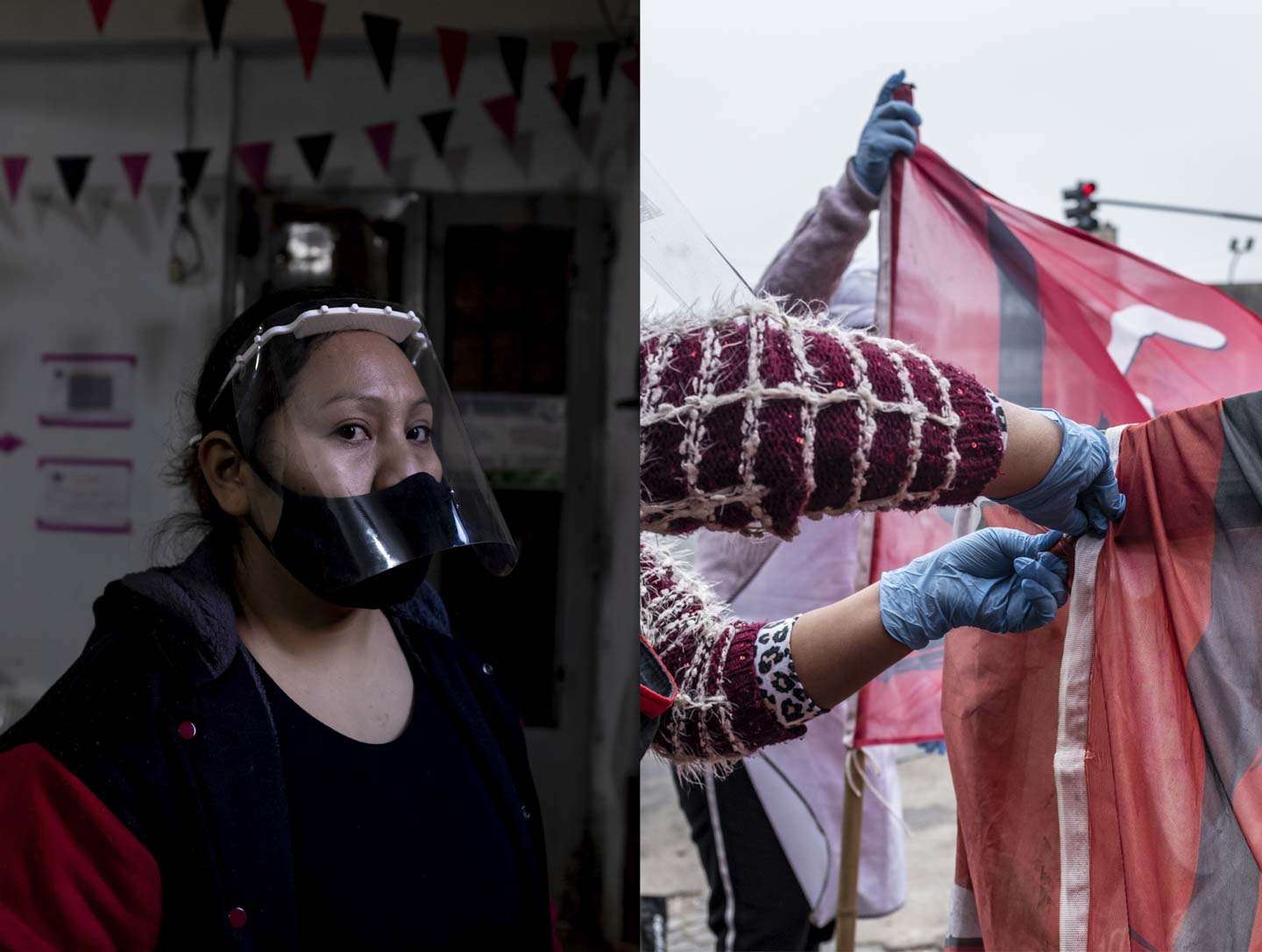 Ana, 35 years old, from Peru. She has lived in Argentina for 10 years. In FOL, Ana helps with gender violence housing issues. Her personal experience with domestic violence led her to support many women in the neighborhood and organization. The pandemic has only increased the incidence of domestic violence in the slum. (Anita Pouchard Serra)

“What the state doesn’t do, we do,” Ana succinctly put it.

Before the lockdown, Ana and her comrades were set to open a new soup kitchen, but the pandemic made it impossible to cook and serve food in the cramped space in a safe manner. But rather than give up, they opened the kitchen as a food distribution point: Each weekday, they walk a mile to the “Berta Cáceres” kitchen, load up their carts with food for 100 people, and walk the mile back to their kitchen, which they’ve named “Las guerreras del FOL.” 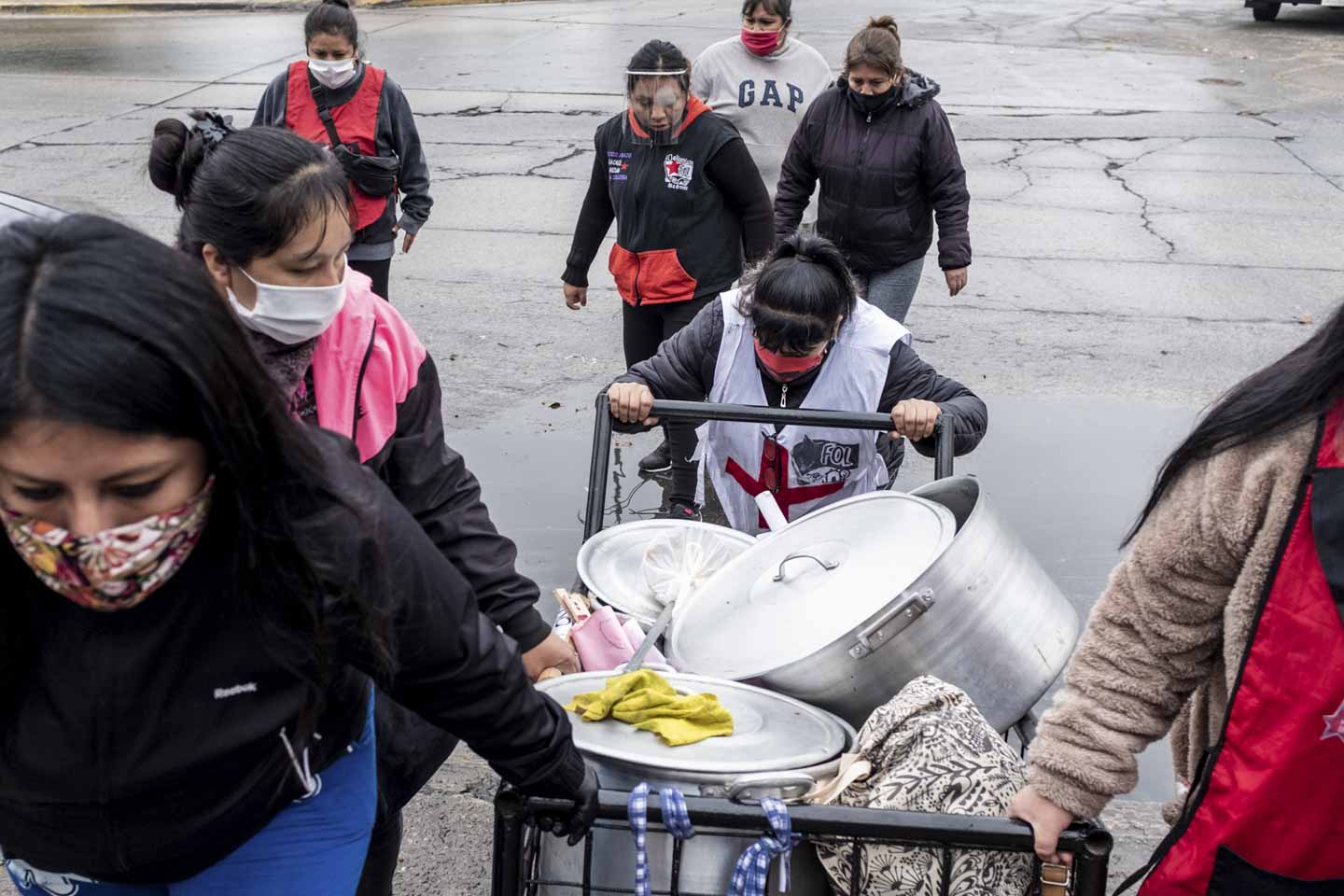 The members of the “Guerreras del FOL” soup kitchen take their cumbersome supplies back to their kitchen after a public soup kitchen. (Anita Pouchard Serra) 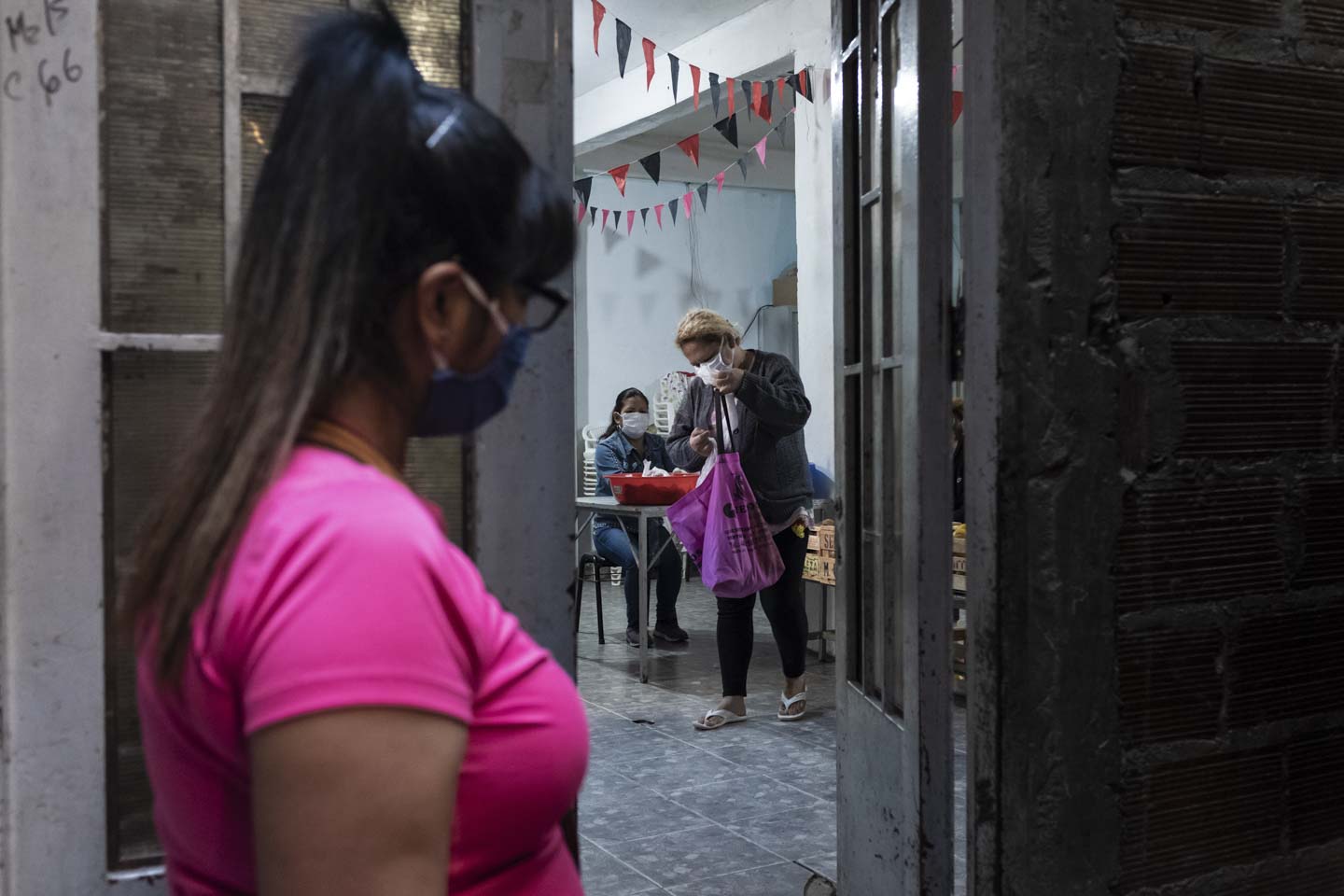 This new method of distribution isn’t without risks: “We avoid going through Perito Moreno Avenue. It’s more dangerous,” Andrea, one of the youngest members of FOL, told me. “One time some people robbed the convoy, taking the food and all the personal belongings from the compañeras.”

But it’s worth it to get food to the many families that depend on them, and it’s a powerful feeling for these women to be providing for themselves. “I grew up with a macho mentality and I didn’t realize it,” Ana told me. “To take care of the man like a king, to listen to him.” In FOL, Ana has found her freedom, and in the eight years she’s been with the organization, she’s seen how her compañeras have grown as women as well—she remembers the shyness of the women when they joined the group, and the assertiveness they now adopt as they carry out orderly food distribution for their neighbors. 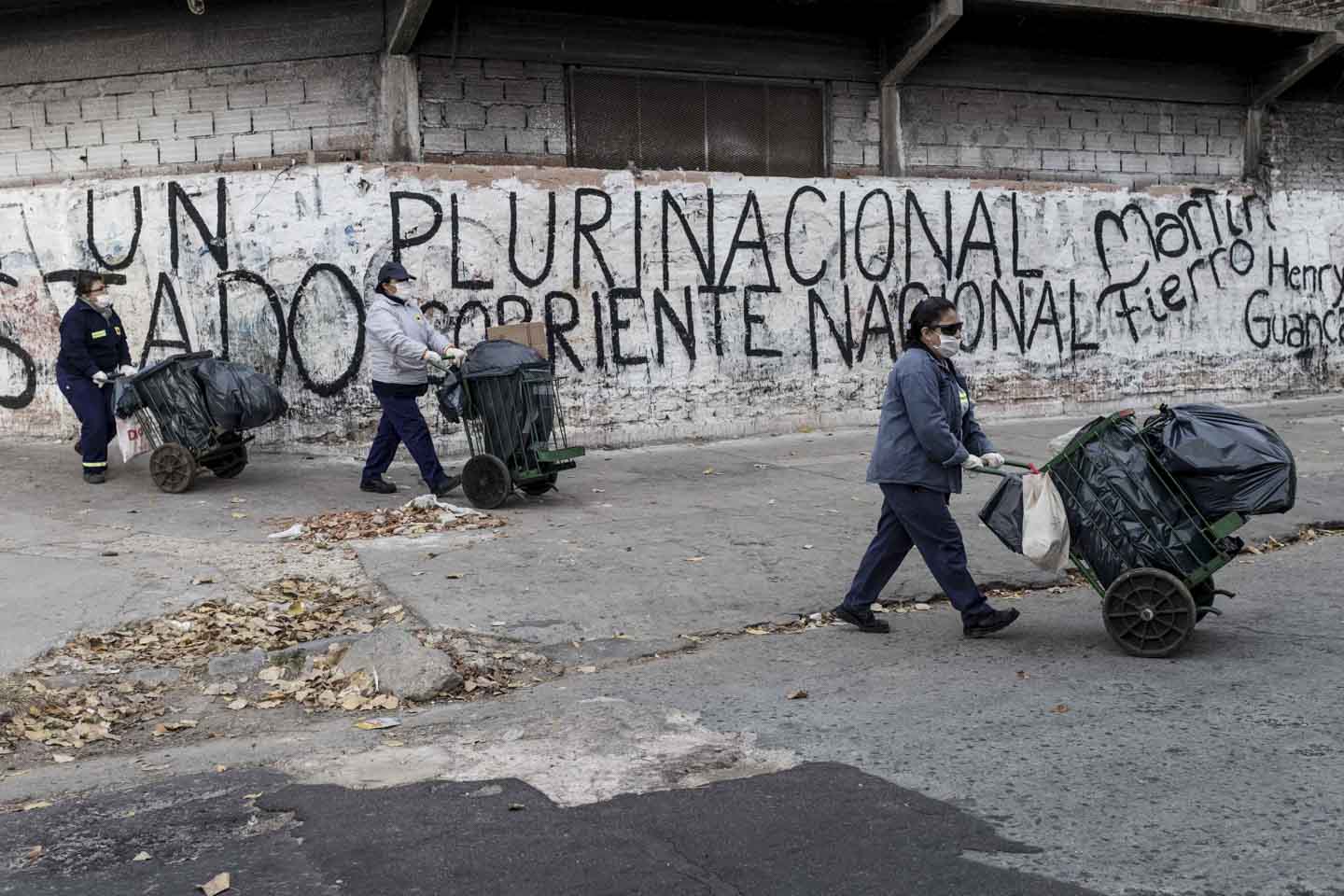 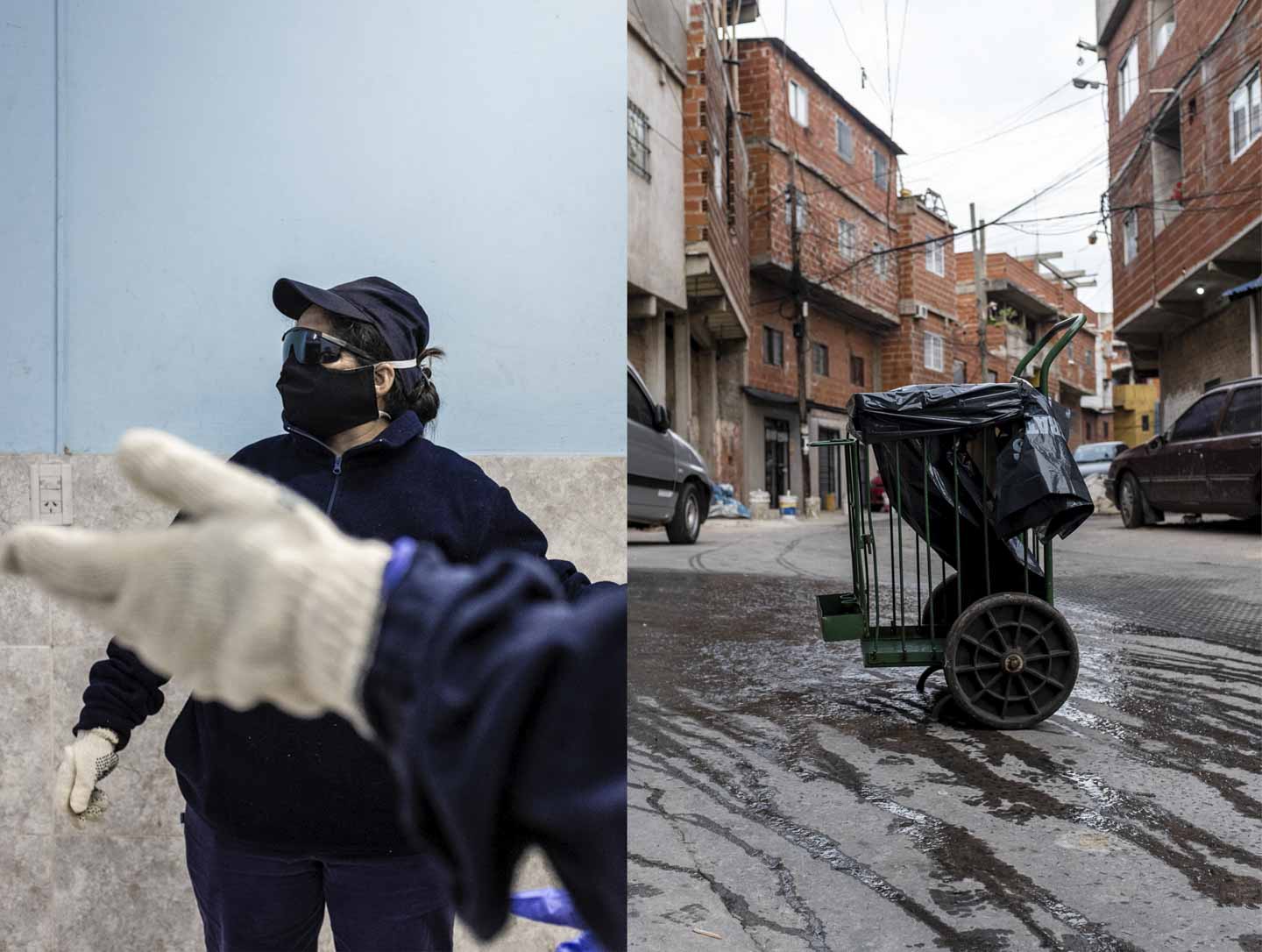 Susana, 49 years old, from Bolivia. She has lived in Argentina for 18 years. Susana is active in the “Berta Cáceres” soup kitchen and the cleaning cooperative. She also loves and enjoys being the “press woman” of the organization, taking pictures of any events or activities in her community. (Anita Pouchard Serra) 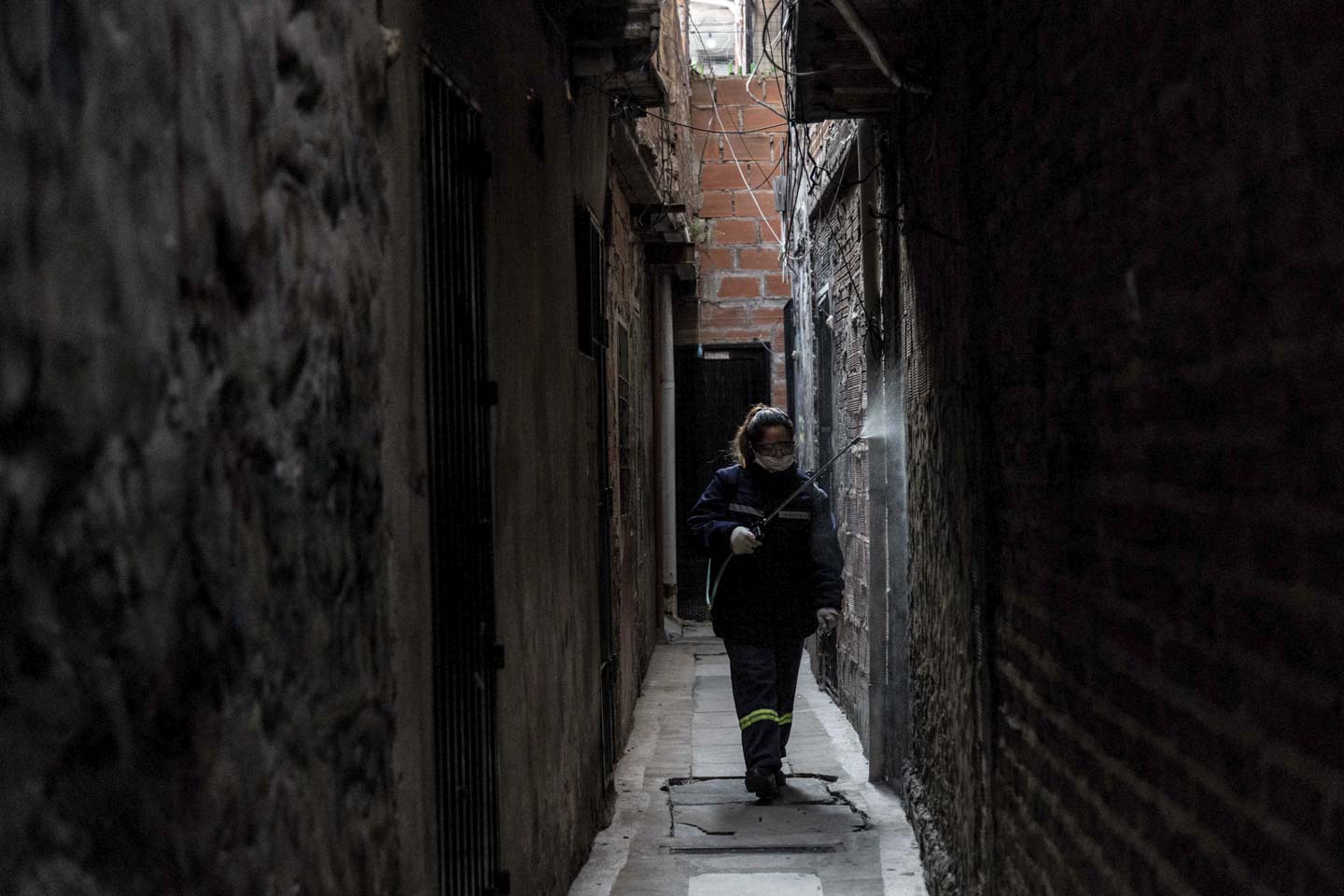 A member of the cleaning cooperative disinfecting the narrow alleys of the slum. (Anita Pouchard Serra)

The pandemic is not Argentina’s first crisis, and FOL has been fighting for a more just country for years. Susana migrated from Bolivia in 2002 into the midst of a political and economic crisis, when bank accounts were frozen and inflation spiraled out of control. Now, at 49, Susana makes up part of FOL’s cleaning crew. As she winds her way through the alleyways of the slum, she calls out “Collection! Garbage collection!” Since the pandemic hit, this crew is also disinfecting the neighborhood, armed with work pants, protective gloves, masks, and glasses. After her shift, she also works on the group’s publicity, writing up the day’s activities and taking pictures to be distributed over WhatsApp, keeping her neighbors informed. 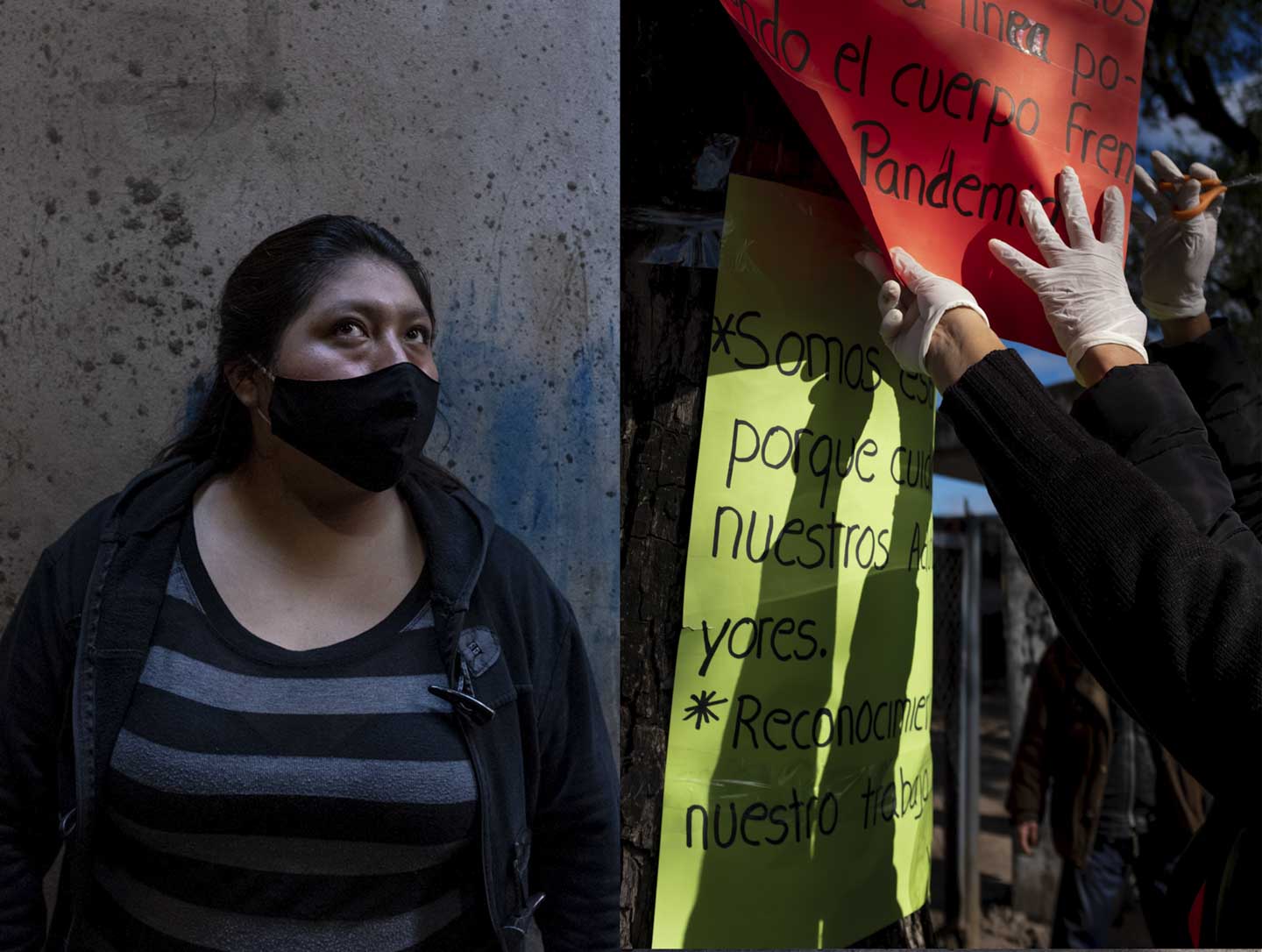 Andrea, 22 years old, from Bolivia. She has been in Argentina for six years. Leaving her country was not a personal choice: Her parents forced her to go. In the beginning it was hard for her, but after going back to Bolivia alone for a few months, she finally decided to stay in Buenos Aires. Today she represents FOL in the campaign Migrar no es delito (“migration is not a crime”), helping other women in the neighborhood to secure legal residency. (Anita Pouchard Serra) 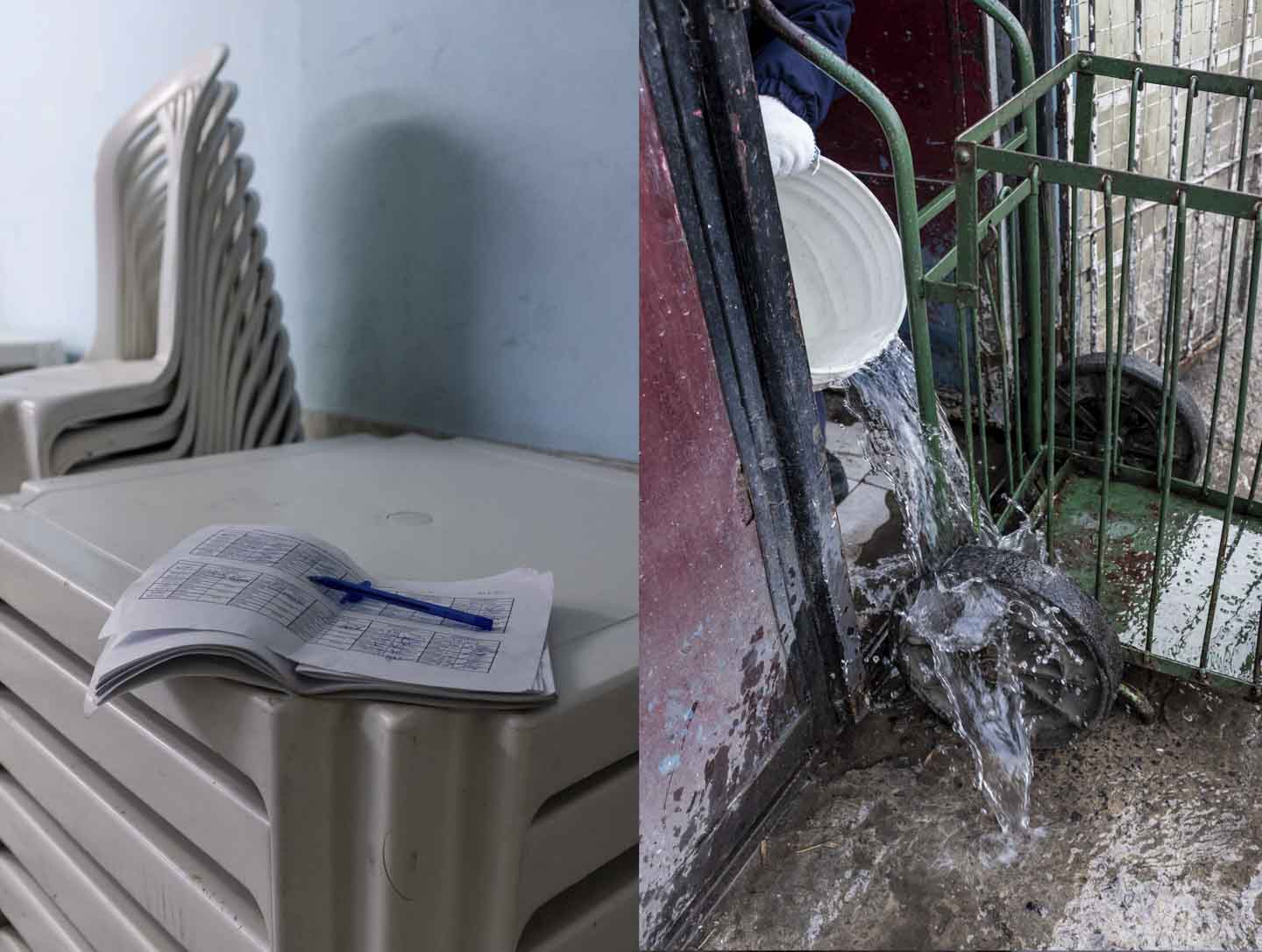 On the day I followed Susanna, she got some bad news: As a frontline worker, she had come into contact with someone who had contracted the virus. She isolated herself for several weeks in a hotel room made available by the state for patients with mild cases. Thankfully, she didn’t have to go to Piñero Hospital, an underfunded and overstretched institution that most 1-11-14 residents fear entering. 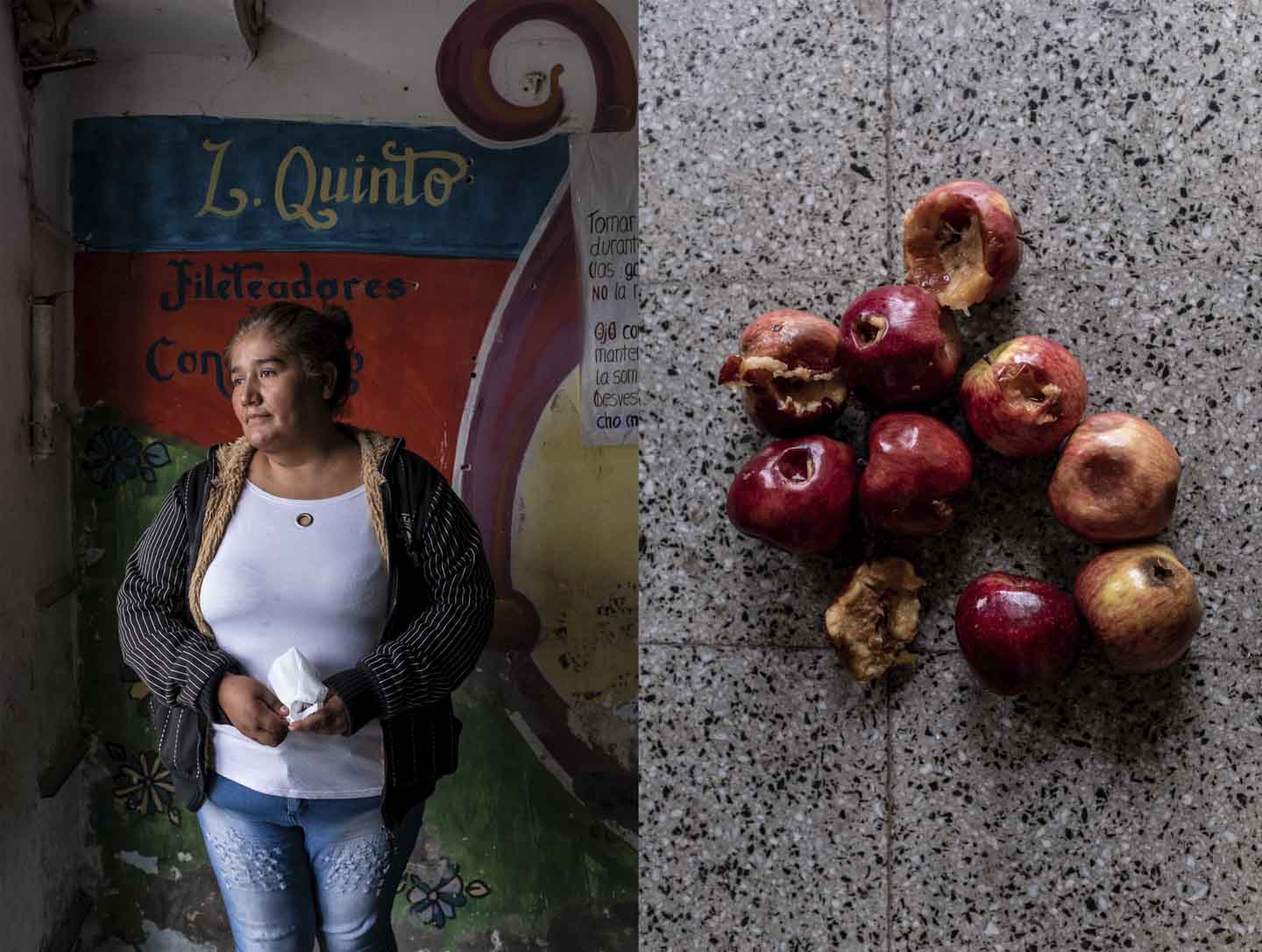 Patricia, 42 years old, from Bolivia. She has been in Argentina for four years. (Anita Pouchard Serra) 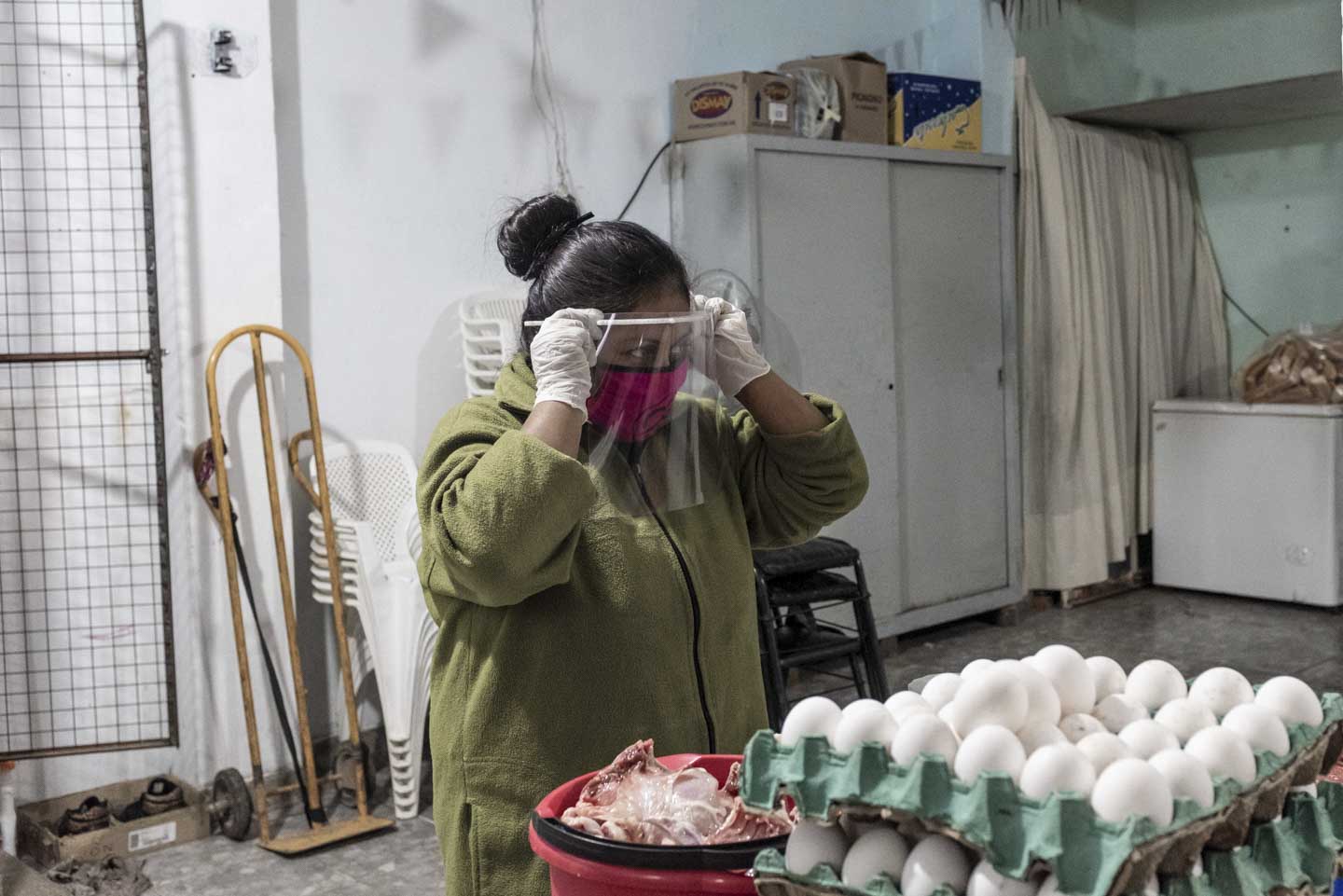 As the day winds down, the women of FOL clean up the soup kitchens, disinfect the surfaces they’ll use the next day, and talk about the promises the government has made but has failed to deliver on. The 10,000 pesos promised to everyone with at least two years’ residence? Many people in this slum have had their requests rejected for no clear reason. The cleaning kits touted by Buenos Aires Mayor Horacio Rodriguez Larreta? No one here in 1-11-14 has seen them. Instead, the women migrants of this section of Buenos Aires are making do themselves, as best they can, together. 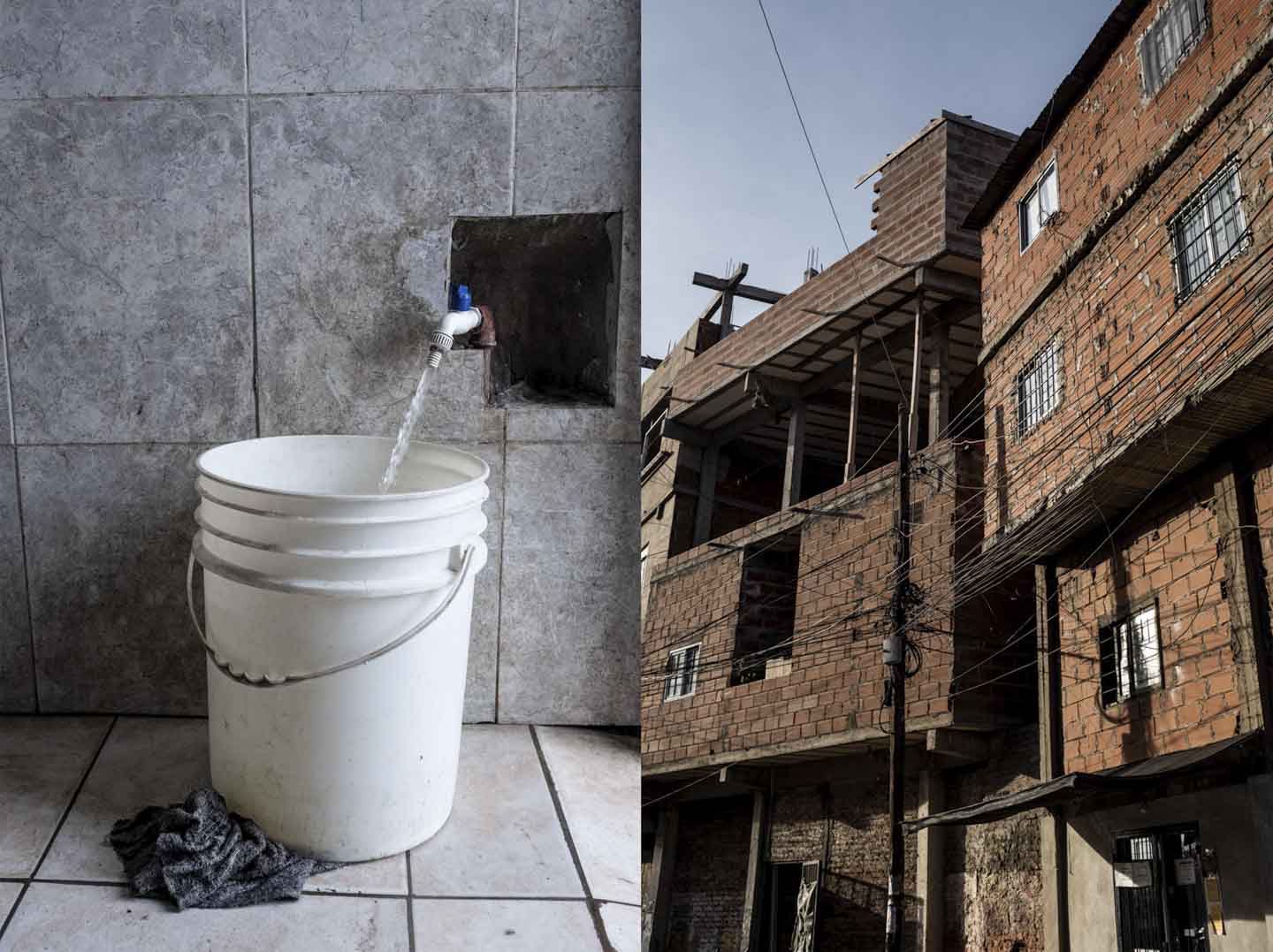