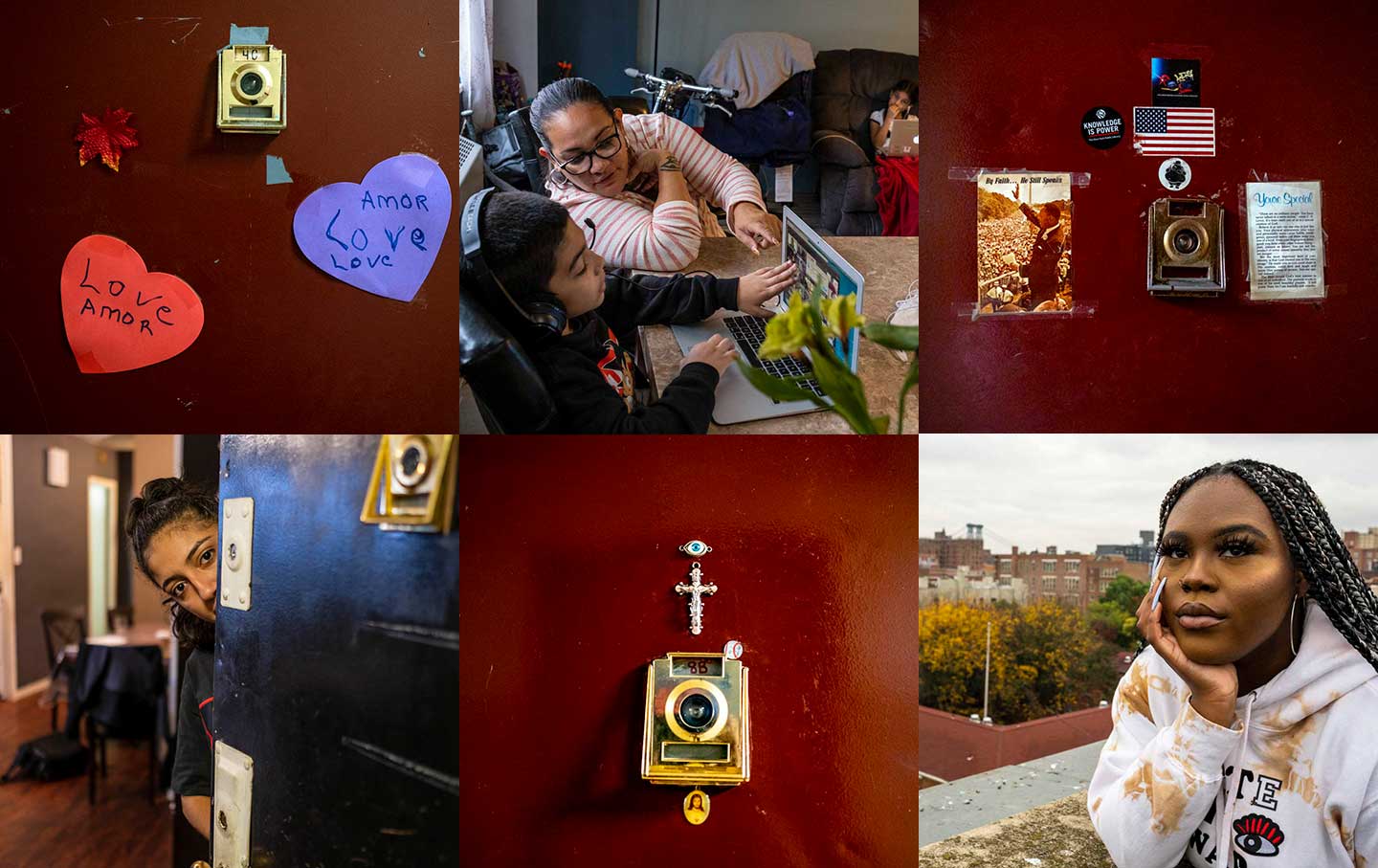 I grew up on Manhattan’s Lower East Side, one of the most diverse, densely built neighborhoods in the world. Boutique shops now stand side by side with bodegas, and rising rents are changing the face of this once-affordable enclave. But the heart of the neighborhood, where some of its residents of longest standing still live, is the many public housing buildings operated by the New York City Housing Authority.

When the Covid-19 pandemic hit New York, I wanted to stay connected to my community. The NYCHA is the largest public housing agency in the United States, and more than 400,000 New Yorkers live in these buildings, so even with chronic underfunding and a years-long backlog for repairs and upkeep, these buildings allow many people to keep a long-term, stable home in a city that seems to be constantly changing. I started volunteering with frontline workers to help deliver food and PPE to my neighbors. We’d go from floor to floor, knocking on doors and chatting with residents. I began to notice that these doors, though standardized like a lot of NYCHA housing, were serving as impromptu canvases for residents to express their perspectives and attitudes about the outside world. A crucifix on a door attests to one resident’s faith; an “I Voted” sticker expresses another’s civic-mindedness; a Puerto Rican flag signals another’s background. I started photographing these doors, and as I did so I also began talking to the people behind the doors, to learn about the many different walks of life that call NYCHA housing home. 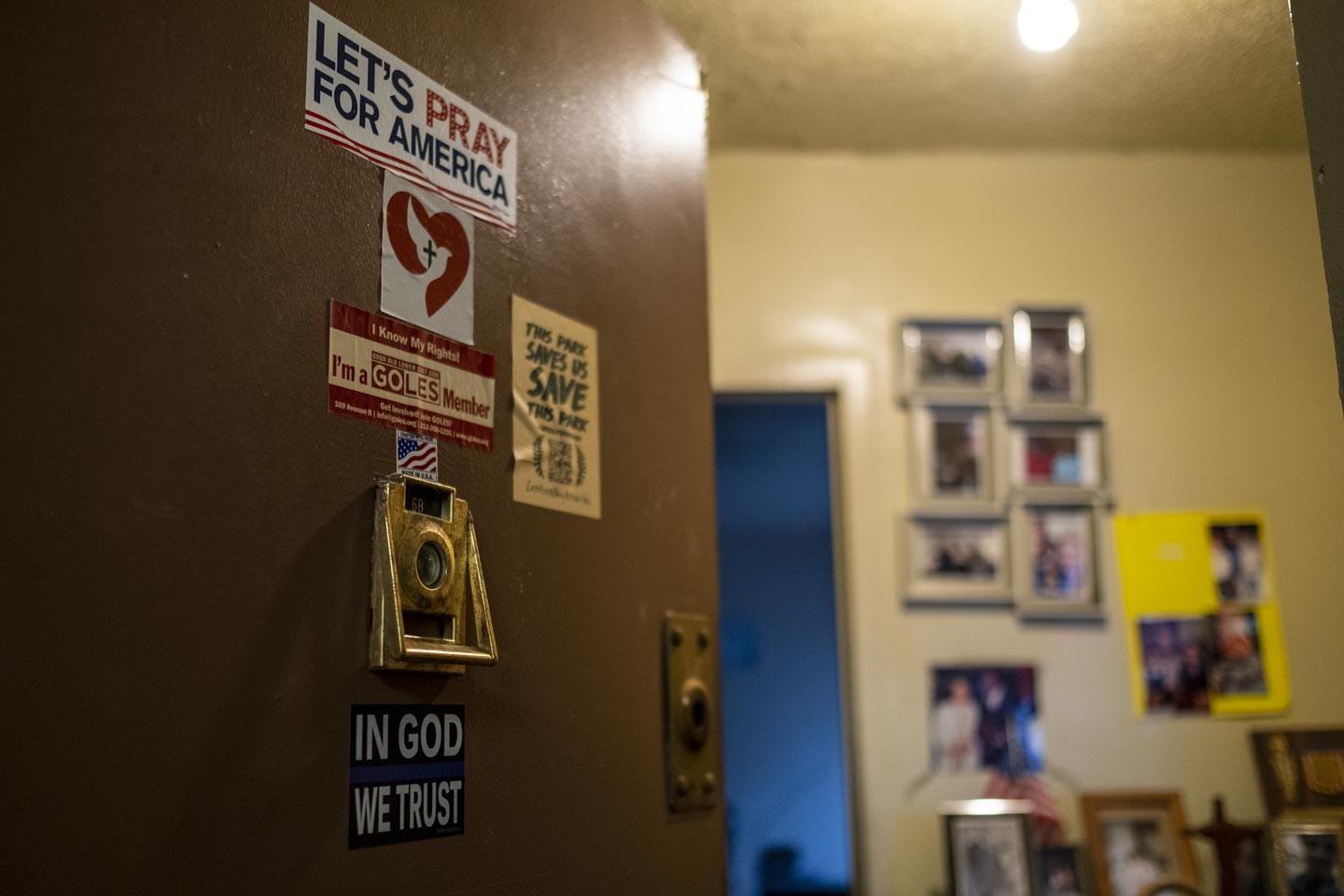 On any given day, 66-year-old Dave Brasuell leads virtual exercise classes for seniors, attends church, helps at food pantries and other grassroots events, and makes sure his neighbors are informed.

Especially during elections. Every election season since 2013, he works the polls to help his neighbors, this year as site coordinator at the LES Girls’ Club, where he “makes sure everyone does their job.” 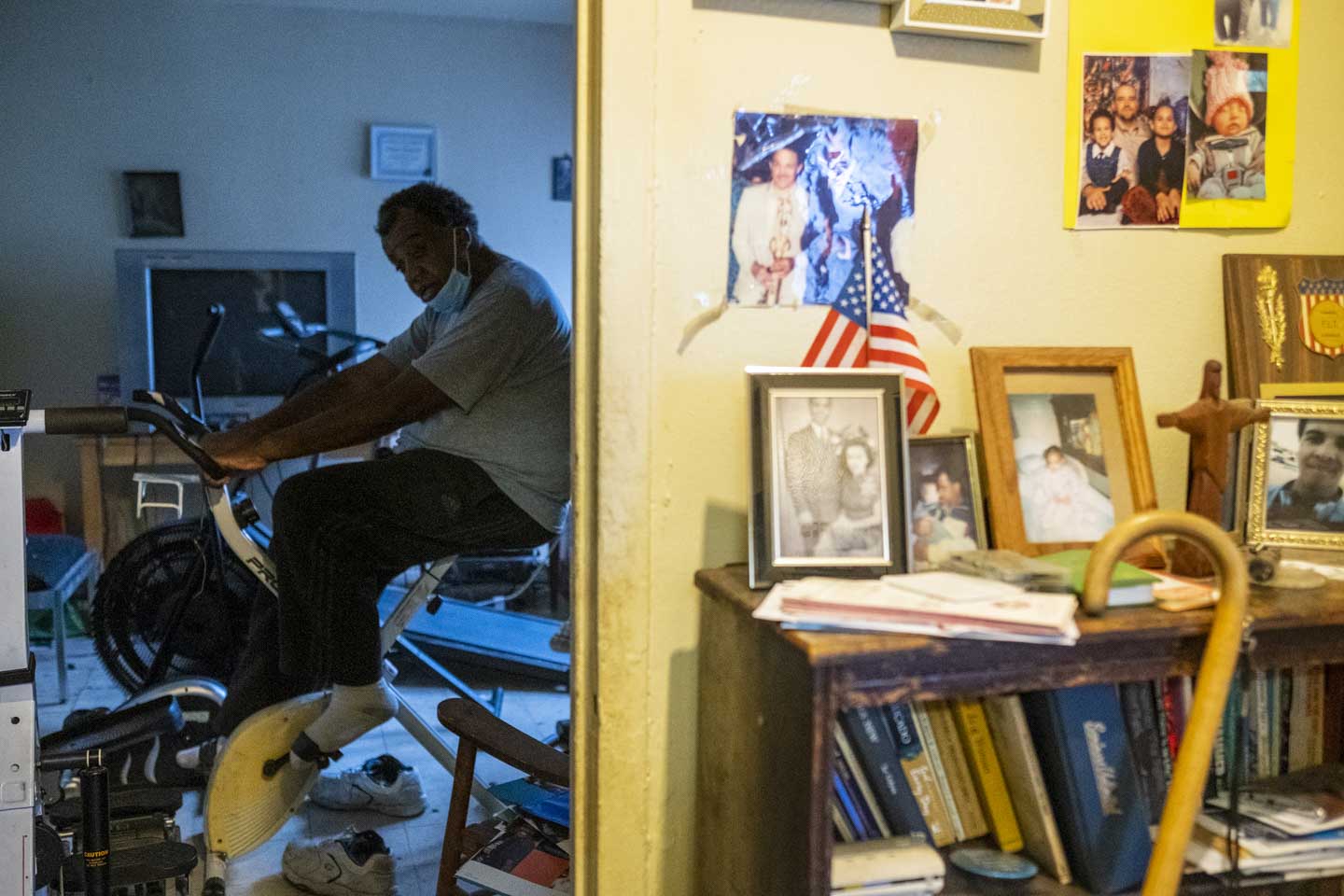 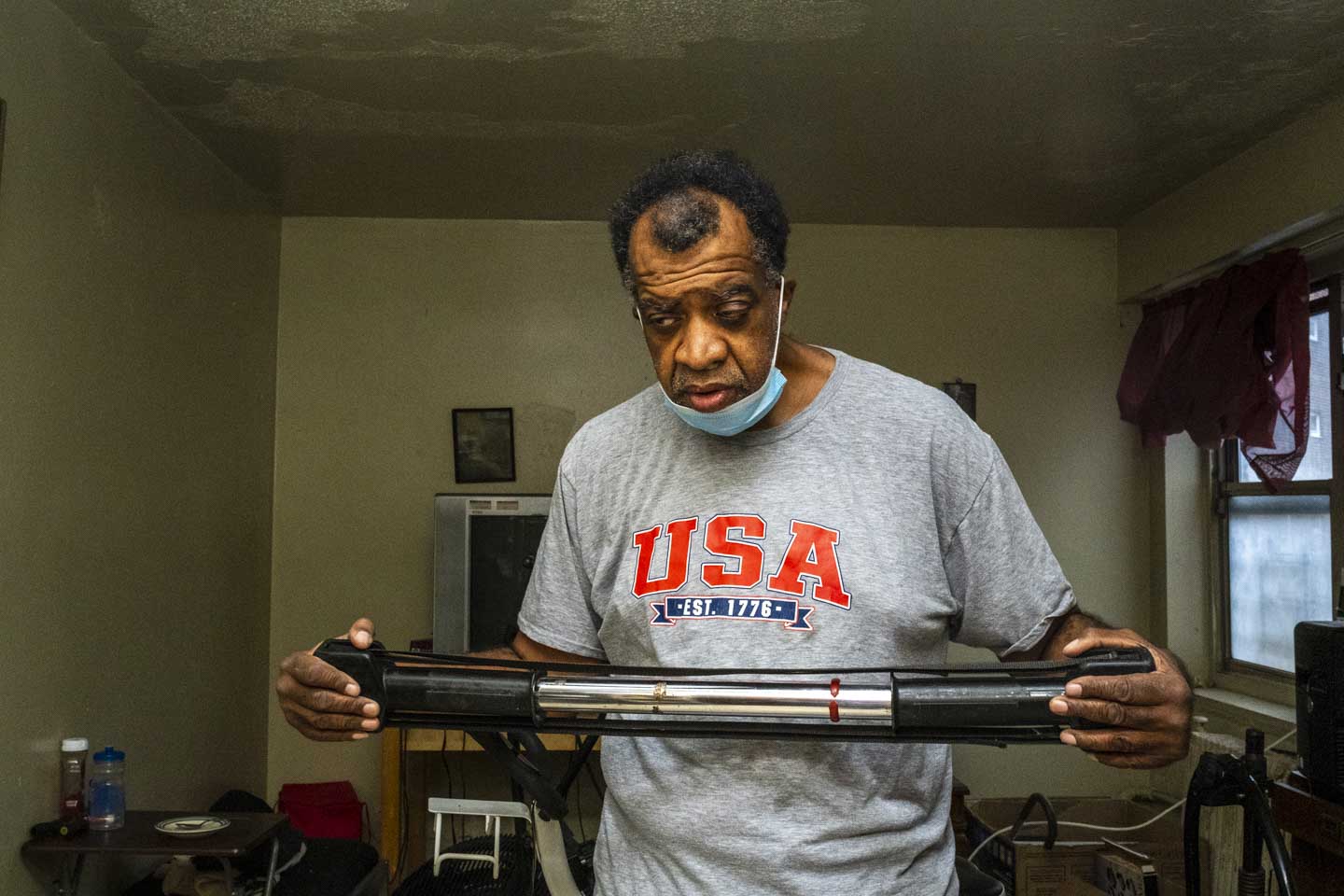 Recognized by his community for “always wearing courage like a lion,” 66-year-old Dave “Braveheart” Brasuell is equipped with a powerful voice that has long spoken on their behalf, amplifying calls for change and celebrating acts of resilience. And on the eve of the election this year in particular, he feels his obligation to roar is paramount. 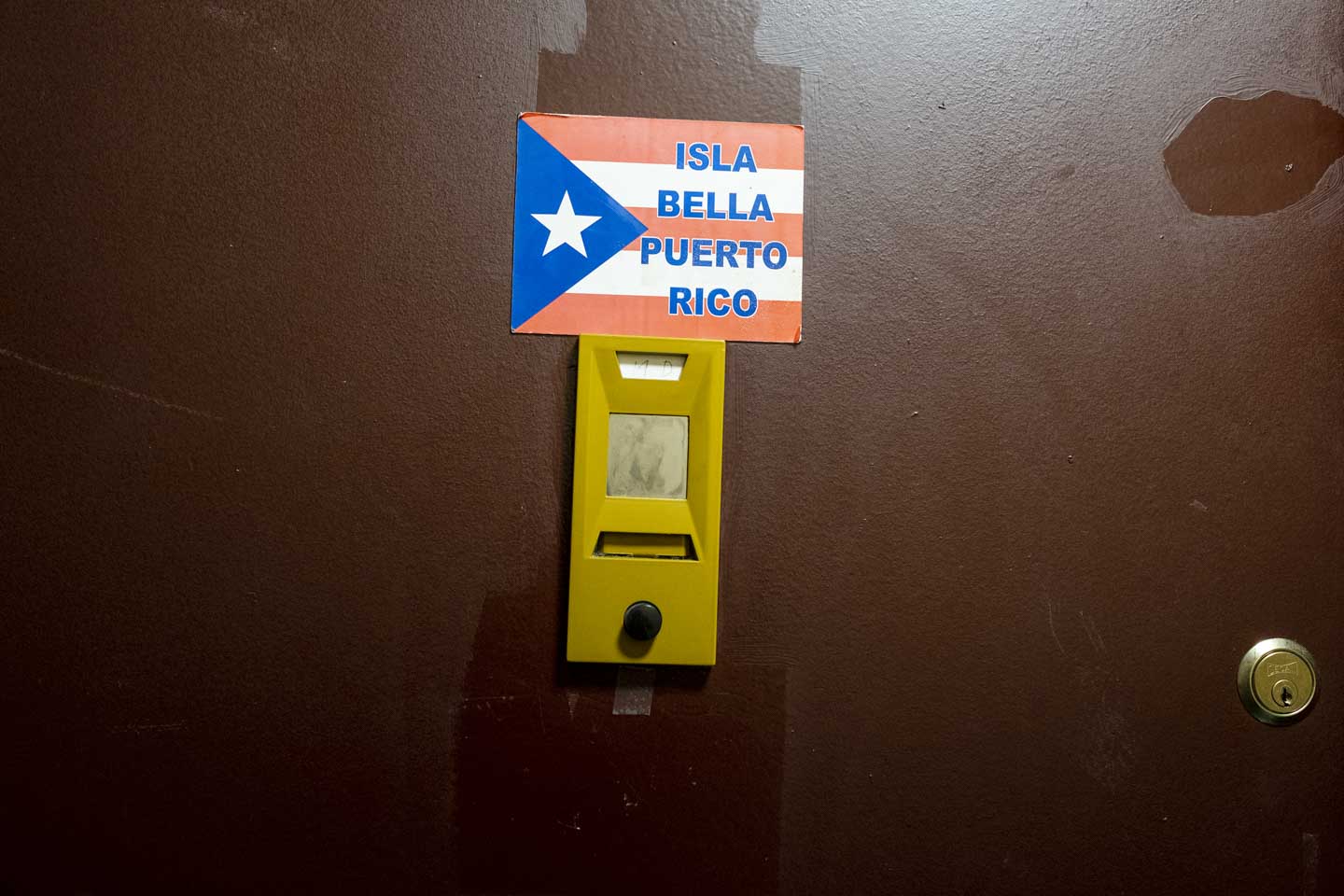 Lilah Mejia is a 42-year-old Puerto Rican mother of six, community activist, education advocate, and program director at the nonprofit Henry Street Settlement. Her confident outspokenness, intellect, and pride have made her an impactful activist, esteemed leader, and invaluable role model for the community, particularly for her three sons and three daughters. 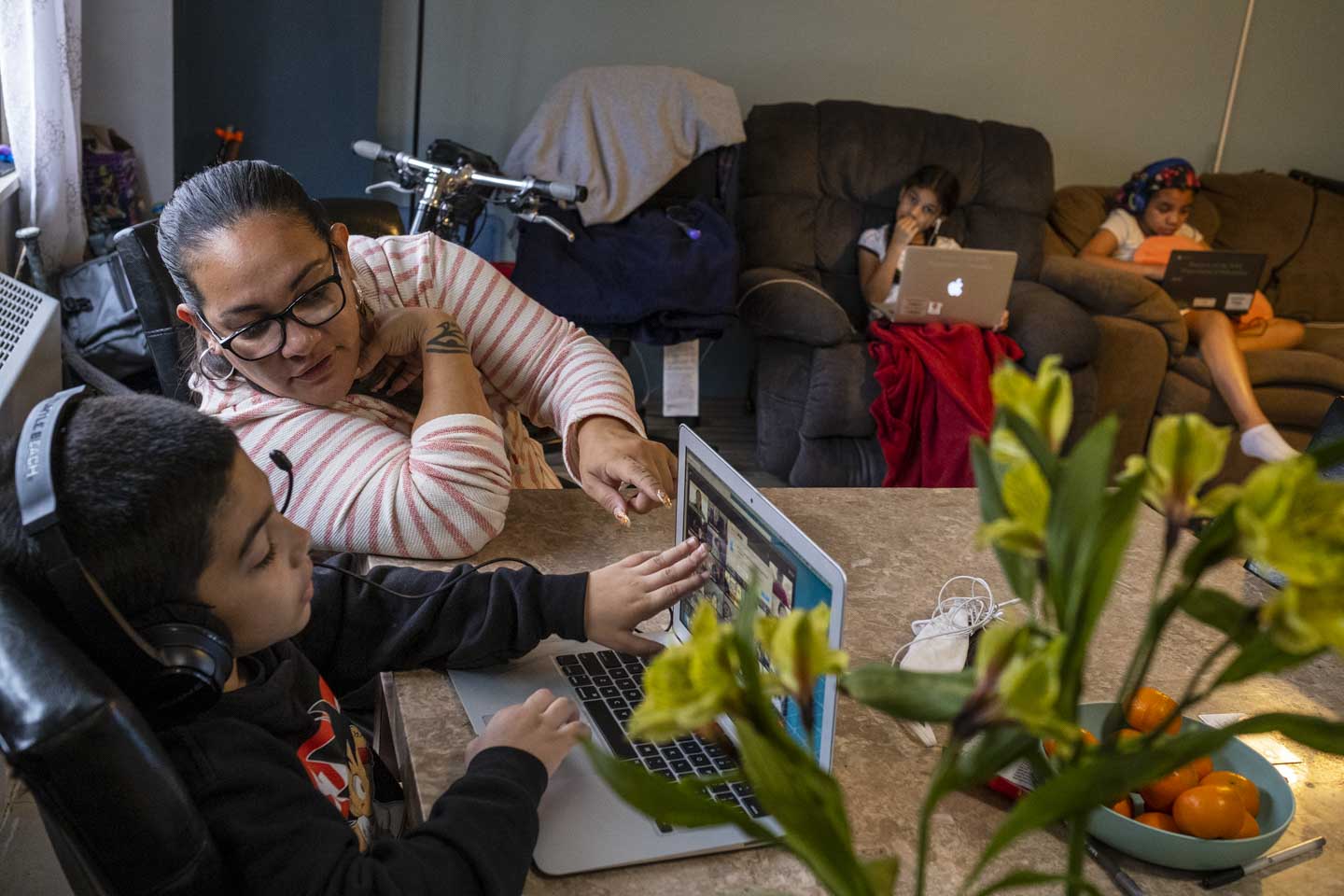 “Everything is a teaching moment for little people,” she believes, especially when it comes to politics. “I bring my kids with me to vote so they can see that, they can experience that, they can understand that, and they can take pride in that. I don’t think that we cover enough what’s happened in the past [in education].” 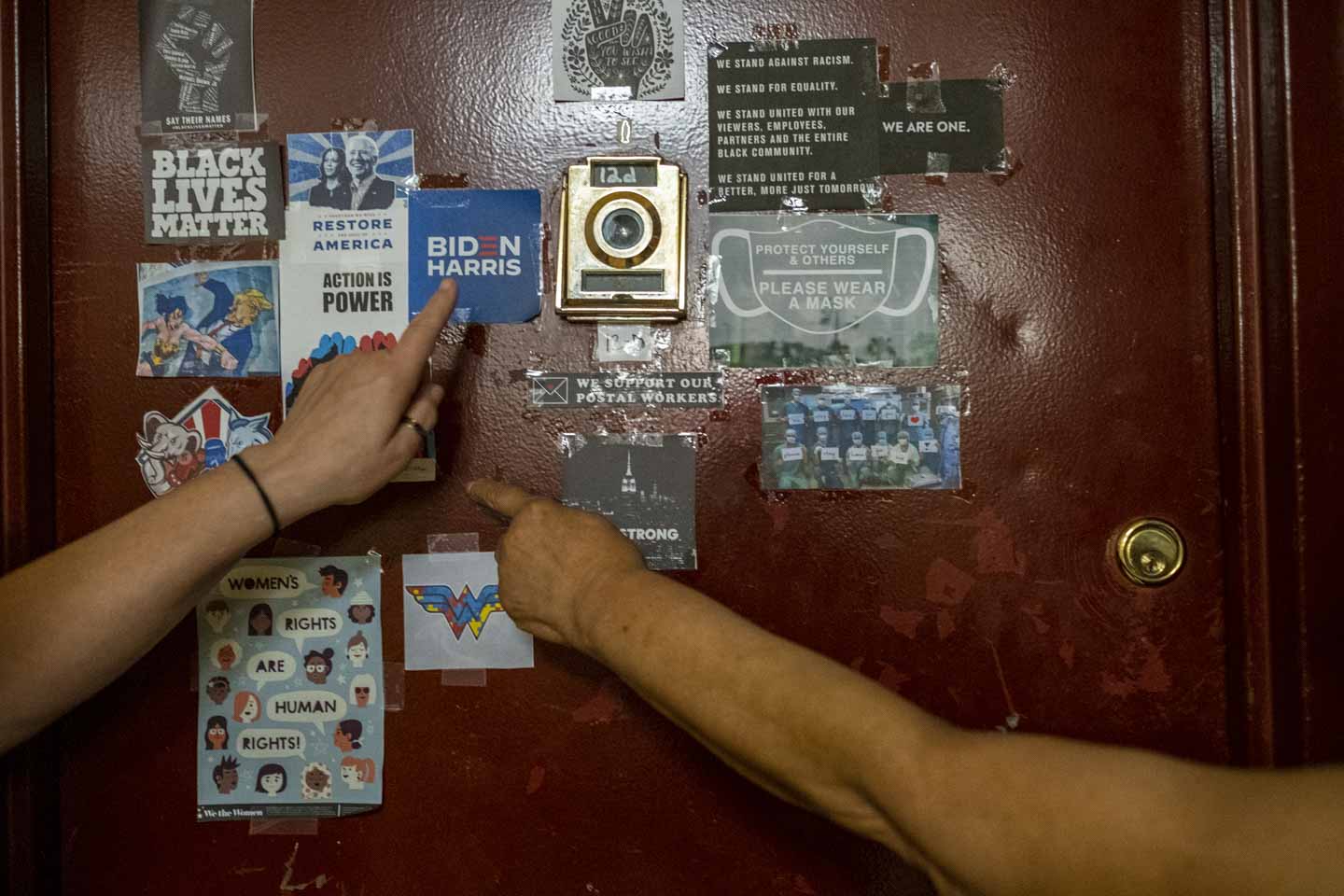 Lorraine’s front door, with collages of issues that matter to them made by her daughter, Jasmine. (Destiny Mata)

Lorraine and her family turned to art to help make sense of the world during quarantine. She and her daughter, Jasmine, created visual collages reflecting 2020’s events, from riots and protests to national and local elections. 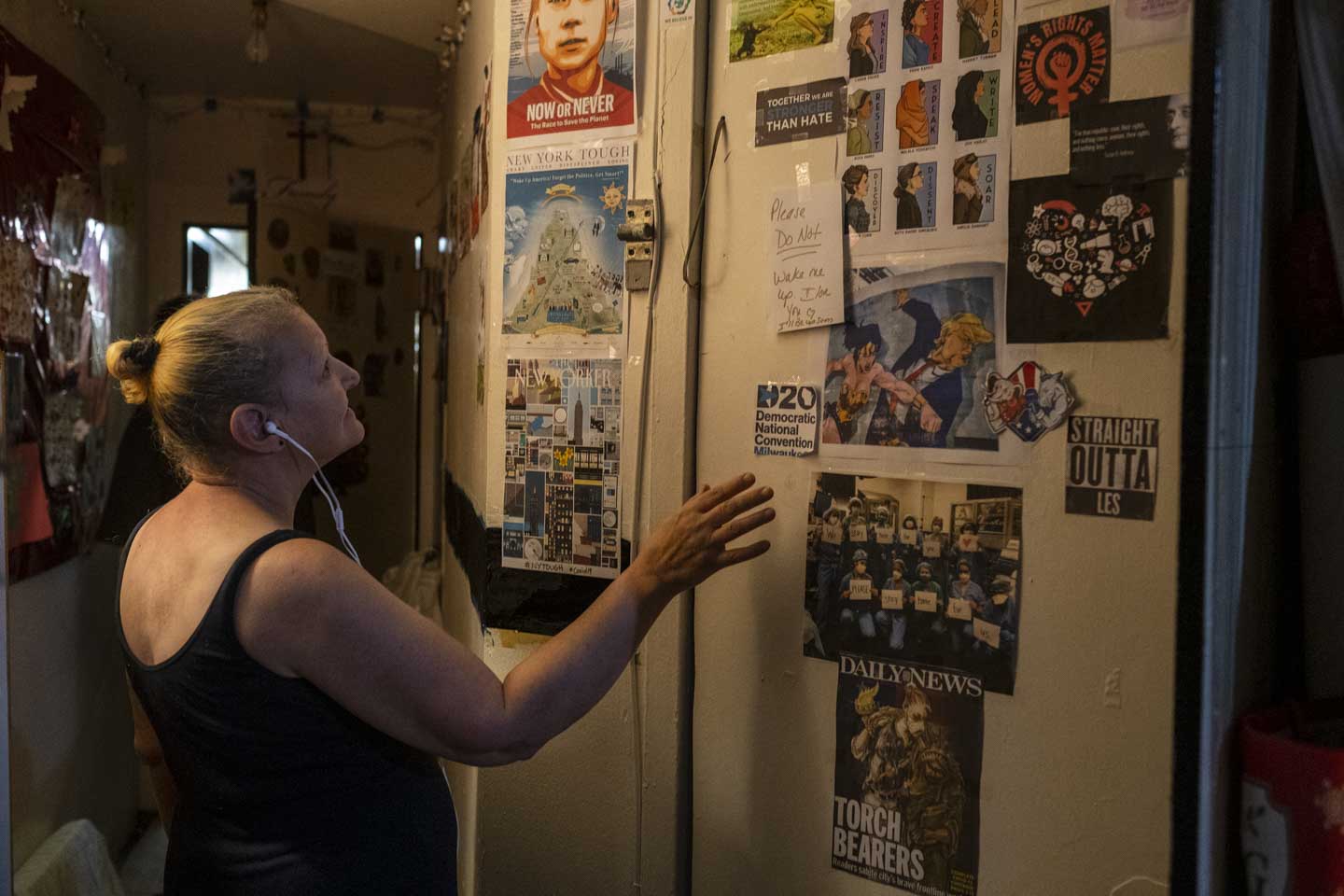 “We’ve never been through anything like this before. I wanted to create a time capsule,” says Jasmine. “I focused on climate change, racism, police reform, Trump…. and right now, I’m especially sensitive when it comes to immigration. I’m half Mexican. I’m not comfortable with the way they’re being treated right now. I have to put my voice out there somehow, I have to say something.” 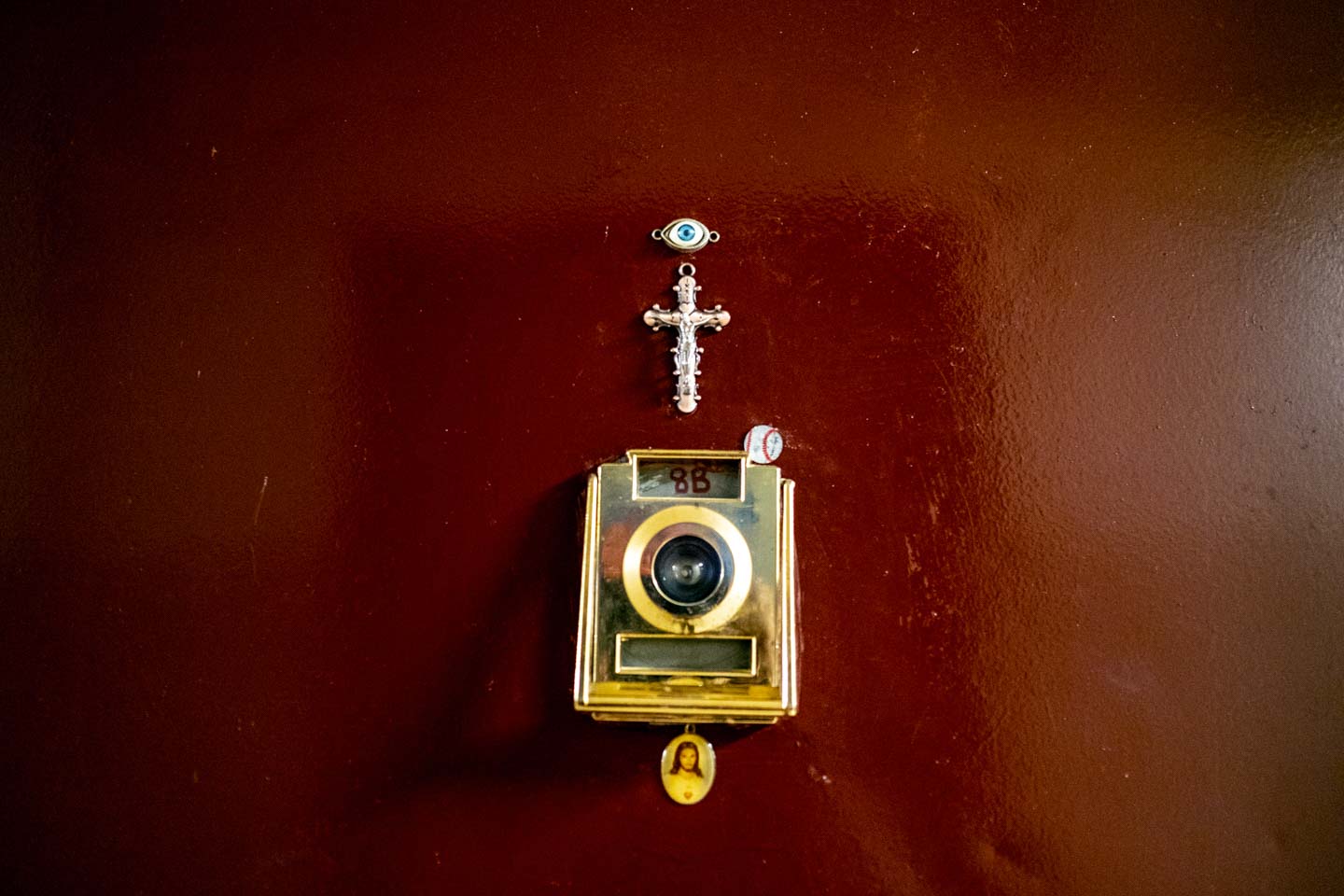 “Homelessness in New York City is just getting worse. And, being that I come from a housing background I understand what’s happening now, with evictions and the consequences of Covid and the shutdown. It’s just the beginning.” 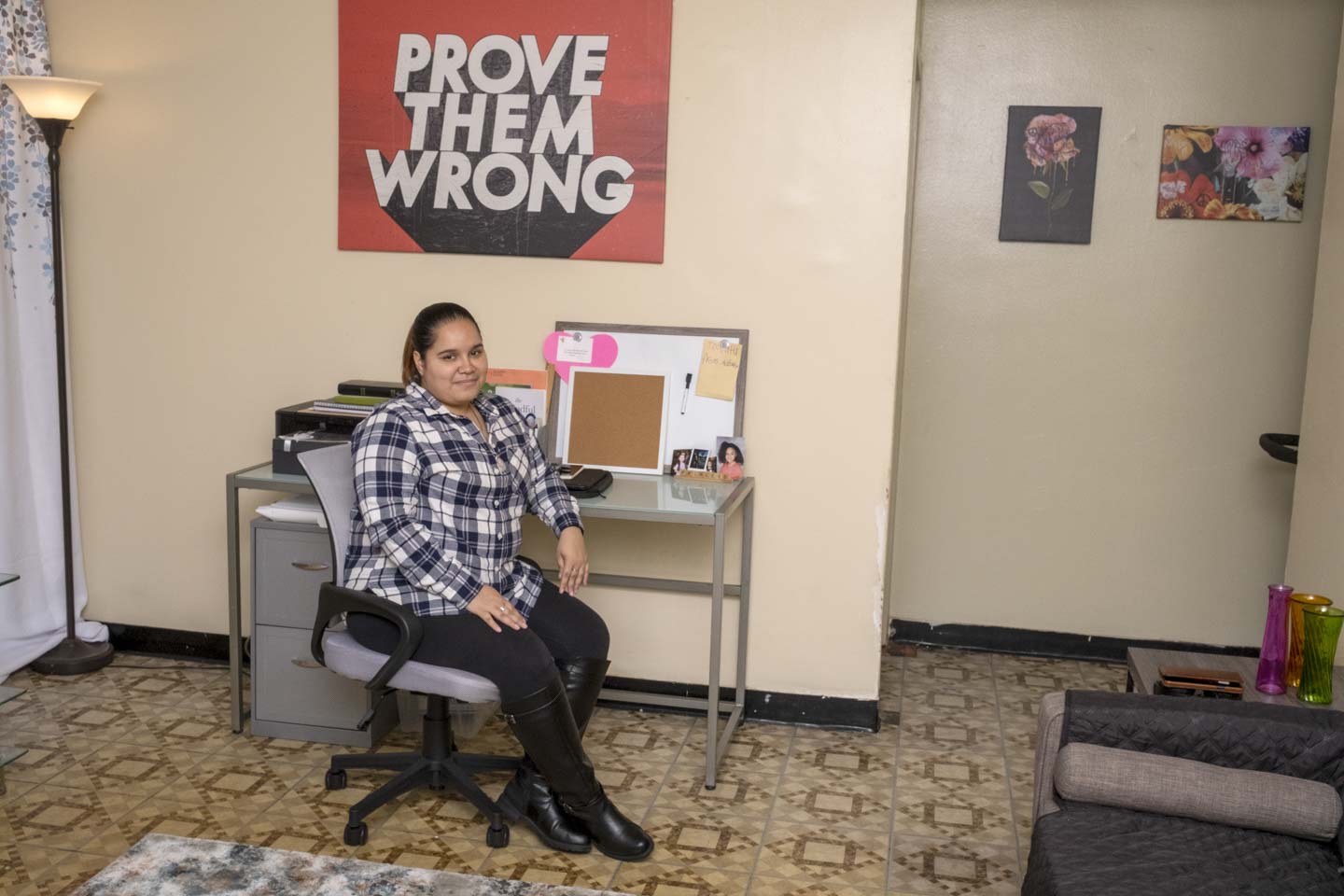 Krystal is dedicated to helping educate her community on current events so they don’t just rely on misleading sensational headlines and tweets. “I’m nervous because a lot of people look at things through one single lens, rather than multiple different lenses. You can’t just look at the world through one lens.” 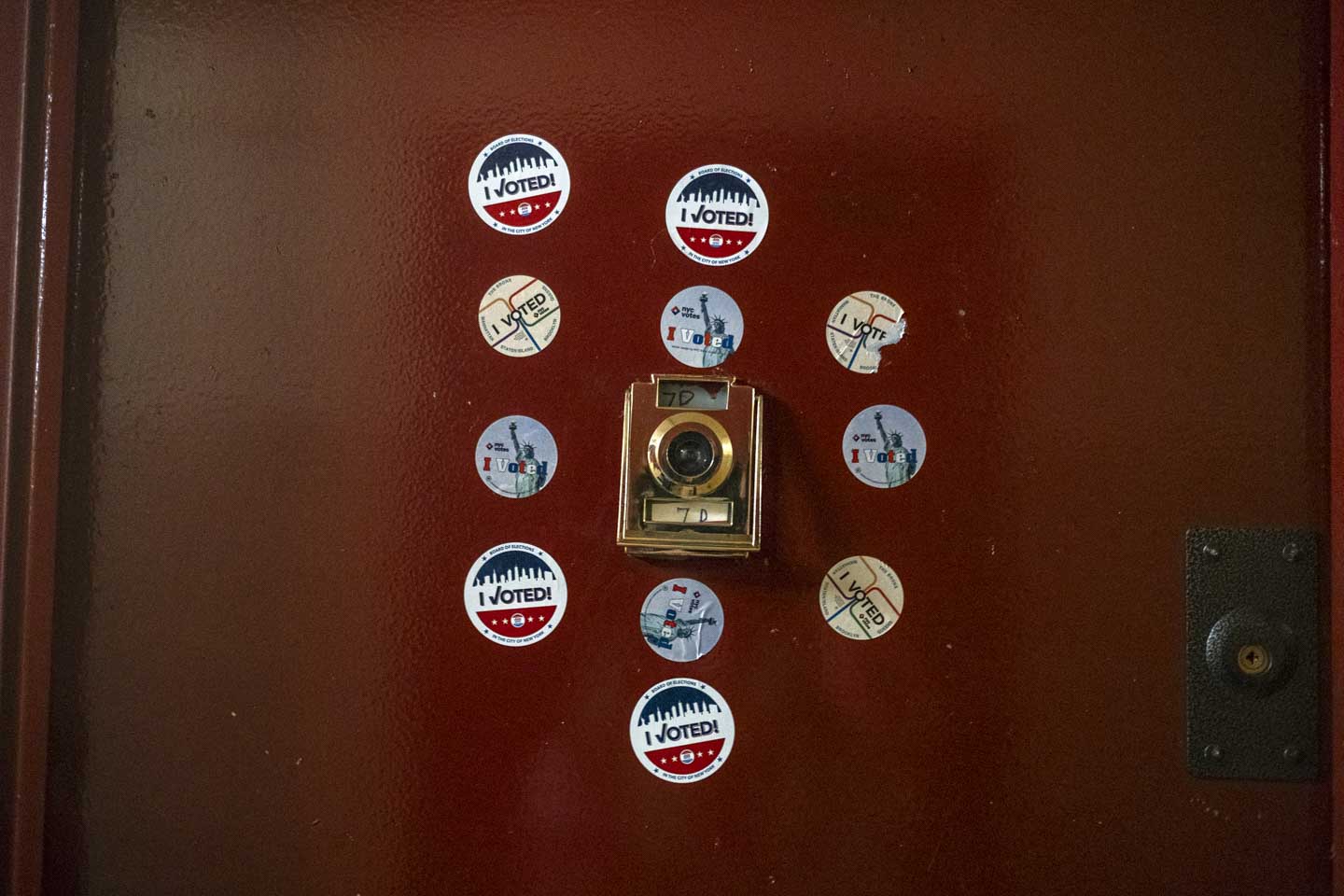 John Blasco and Aura Olavarria were elected by their community to serve as Democratic district leaders of Manhattan’s 74th district. Together, they fight tirelessly for progressive politics and the overall welfare of their neighbors. 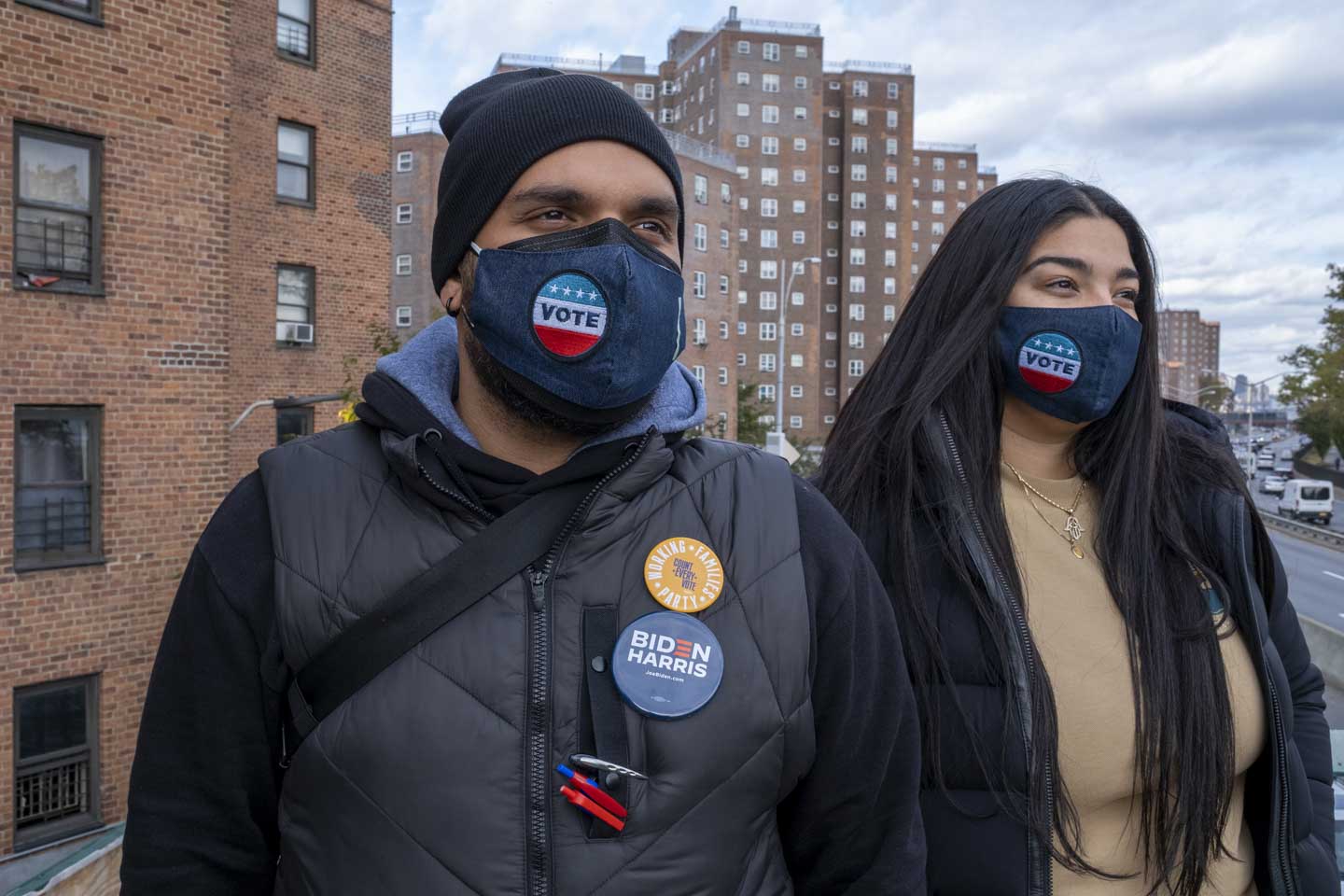 “Opportunities like elections are so meaningful and important because we need to vote for people in power who are actually going to give rights to these communities who have been discriminated against for so long.” These two local leaders prove that action and change starts at the grassroots level. As Aura notes, “I think people are engaged, but sometimes it does take a lot of door-knocking. I’m grateful for all the women leaders in our community because those are the ones that really came through. We have to just keep doing what we’re doing. The fight continues.”

Eighteen-year-old Shandra Rogers exudes an air of maturity and determination unexpected from someone her age. This fall marked her first year at Howard University and her first year of voting in the election. 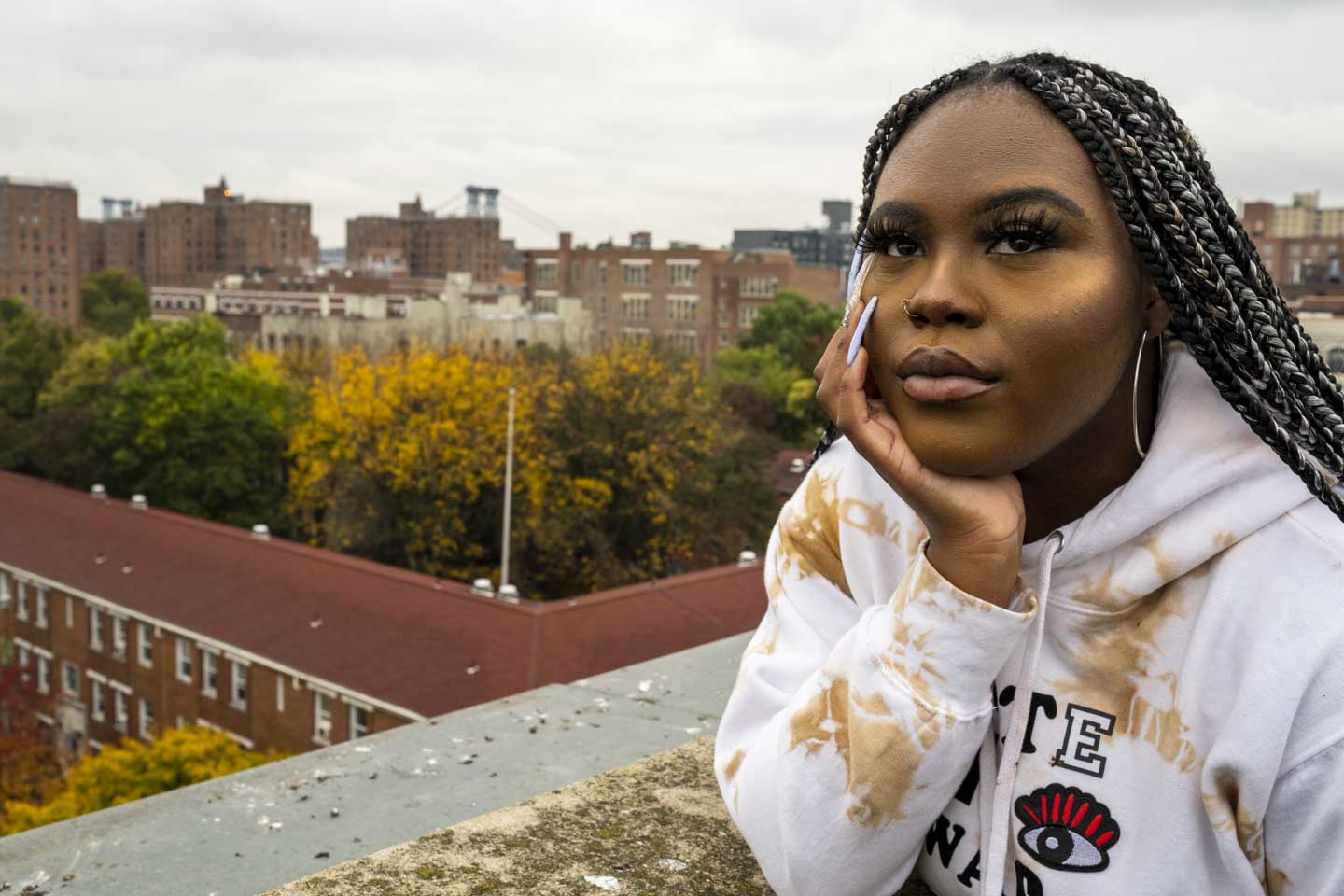 Her NYCHA rooftop was a perfect setting to capture her story, as it symbolizes the crossroads she and other first-time voters find themselves at today. Shandra escapes to the roof to reflect on lessons learned and project ambitions for the future.

“I love my roof because it’s smack in the middle of the Lower East Side. On the right you can see all of the projects on Avenue D. On my left, I see all the high rises. It reminds me of where I’m coming from and where I’m going.”

Shandra was raised in low-income public housing within a family “very rooted in their blackness,” and going to school at predominantly white institutions. “I have a lot of different perspectives and views of things. One of the biggest issues with our politics and society today is the lack of empathy and love, largely because of the representation we have in government. That’s why I want to become a politician.” 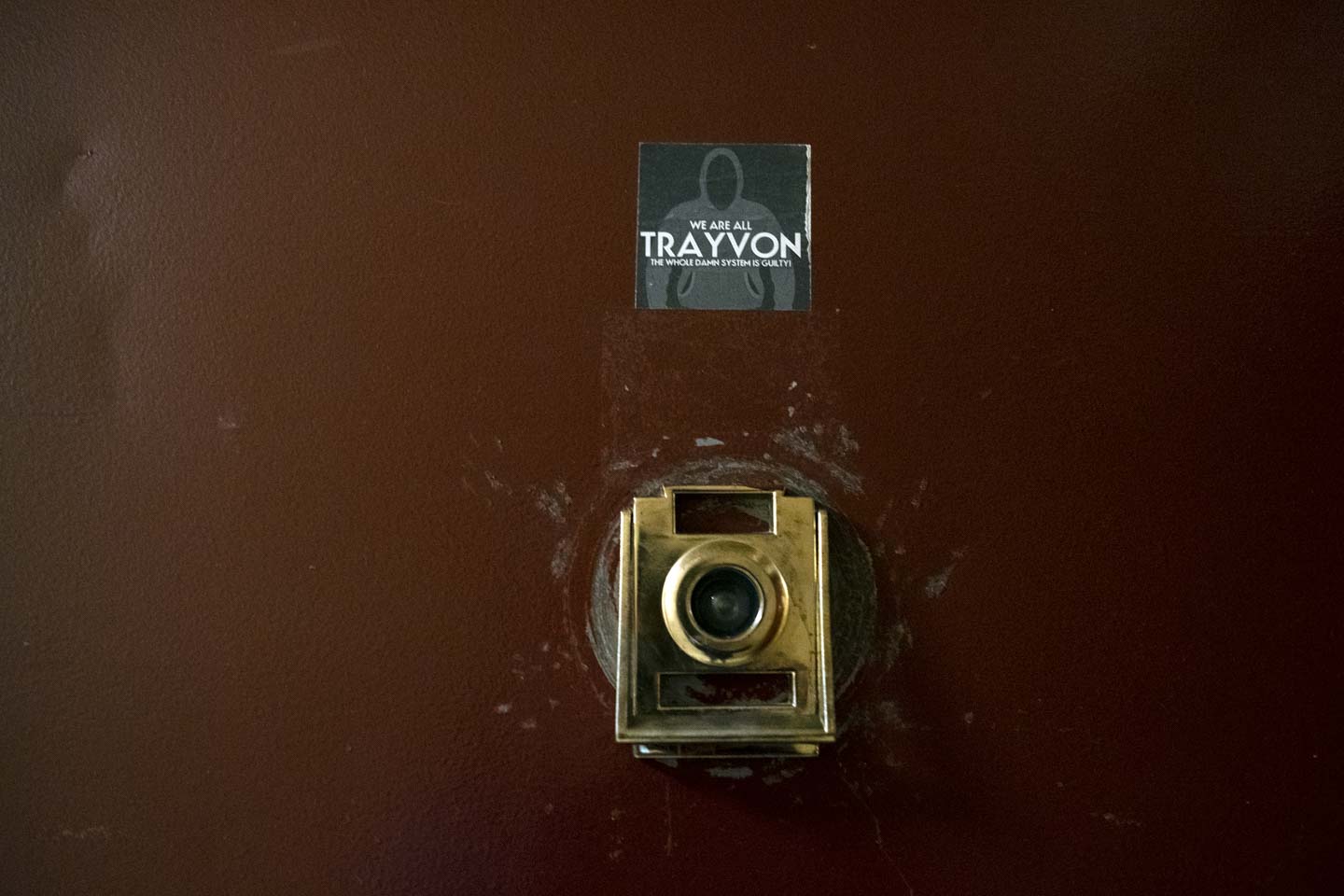 The sticker reads, “We are all Trayvon. The whole damn system is guilty.” (Destiny Mata)

Sage Altamirano is a fiery, smart, self-confident 22-year-old who attends Mercy College and works as a receptionist at a pediatric office—both full-time. Well-versed in topics like generational and societal clashes and systemic issues of racism, capitalism, and mental health, she has a lot to say and the intellect to say it. 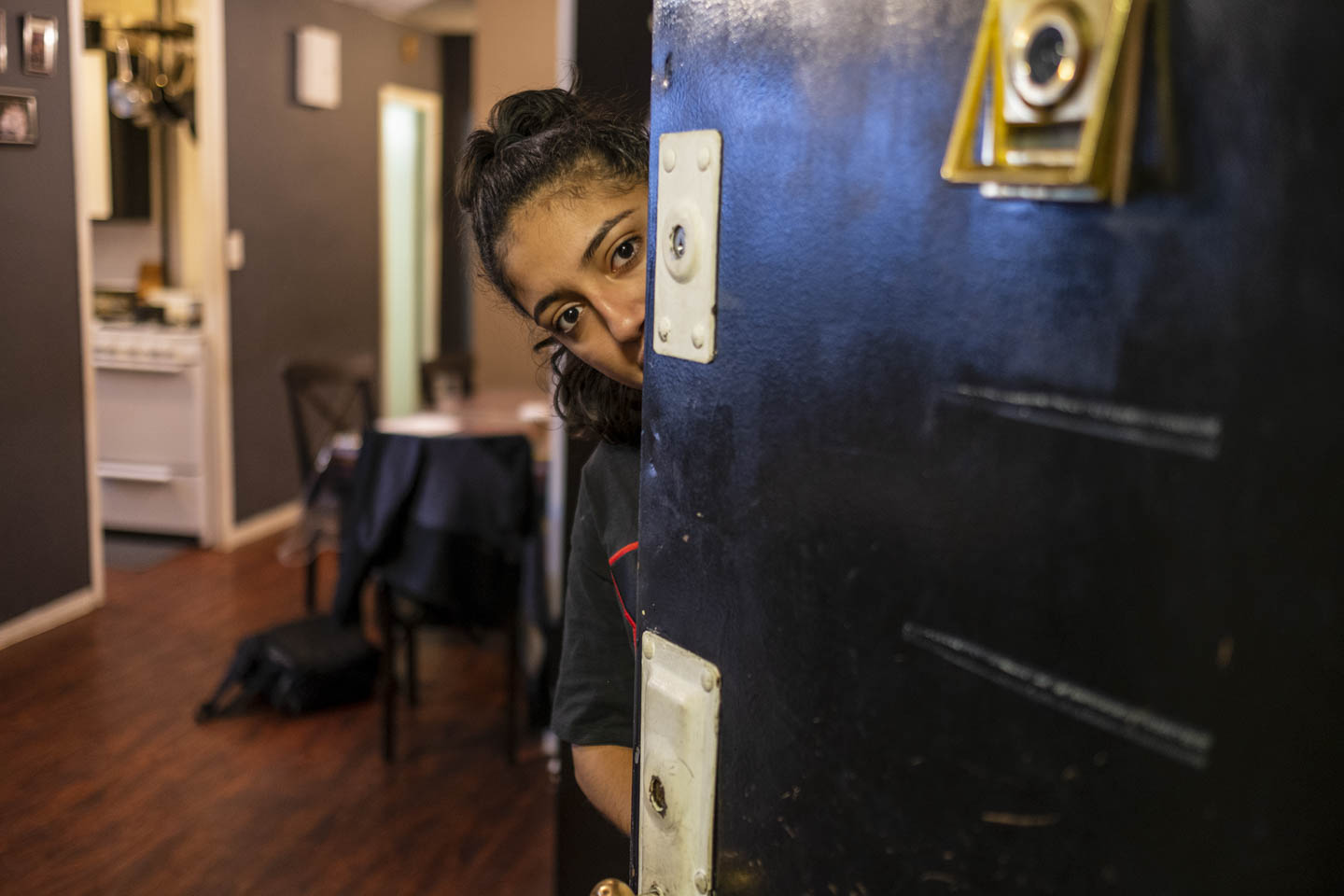 Not only does Sage Altamirano study psychology at Mercy College and work as a receptionist at pediatric office—both full-time—she’s an active sorority member, dedicated big sister to five younger siblings, and part-time caretaker of her grandma. (Destiny Mata)

“Right now, we as a society are not connecting. Some people can’t even acknowledge that America has a problem with racism. Why aren’t we having these conversations? We need to educate ourselves and we need to start actively listening to one another. We’re all humans. Why can’t we help each other? Maybe that’s a young and ideal way of thinking, but that kind of positive mindset can have a ripple effect.” 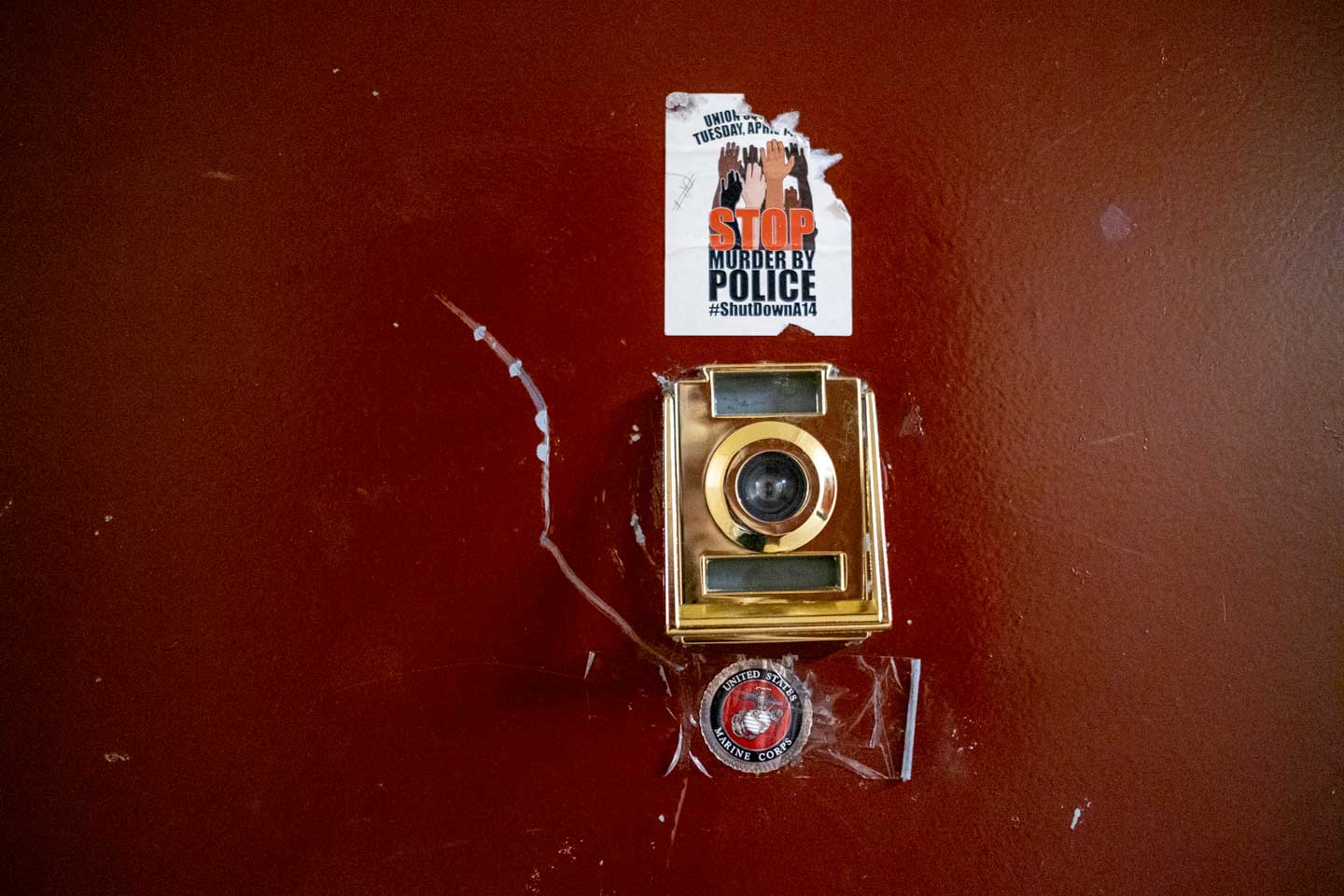 Even though Kay Prieto, a 23-year-old artist and veterinary technician, has largely “removed herself from politics in the last four years,” she’s knowledgeable and passionate about today’s mountain of challenges. 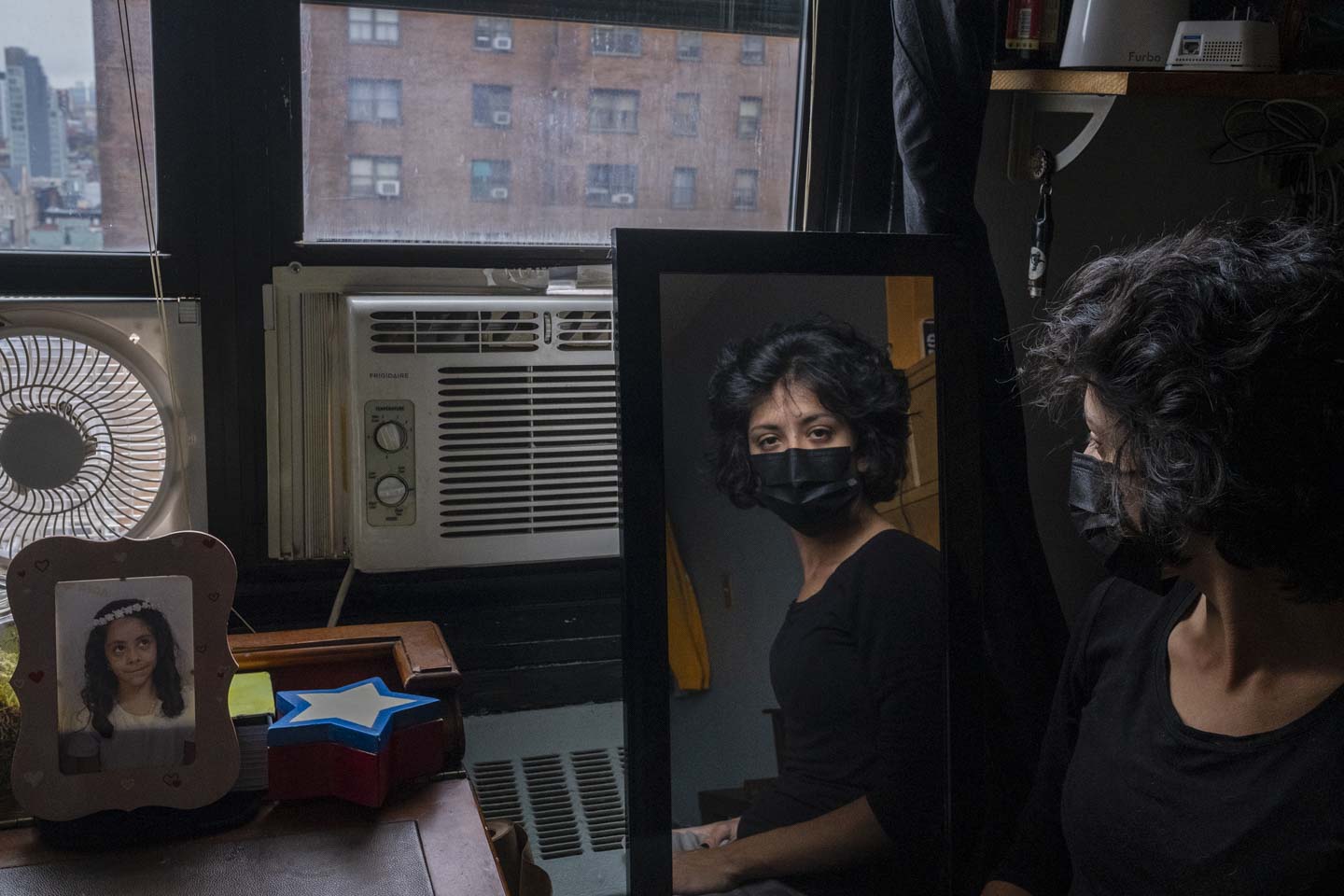 “It’s hard to prioritize one issue or the other. But I can speak to the ones that affect me personally—like police brutality, I’m a big advocate for defunding the police. I’ve had to rely on Planned Parenthood in the past—obviously women’s reproductive rights. And mental health. I feel like everybody deals with mental health issues, but especially from lower-income neighborhoods where people don’t have access to [mental health] facilities.” 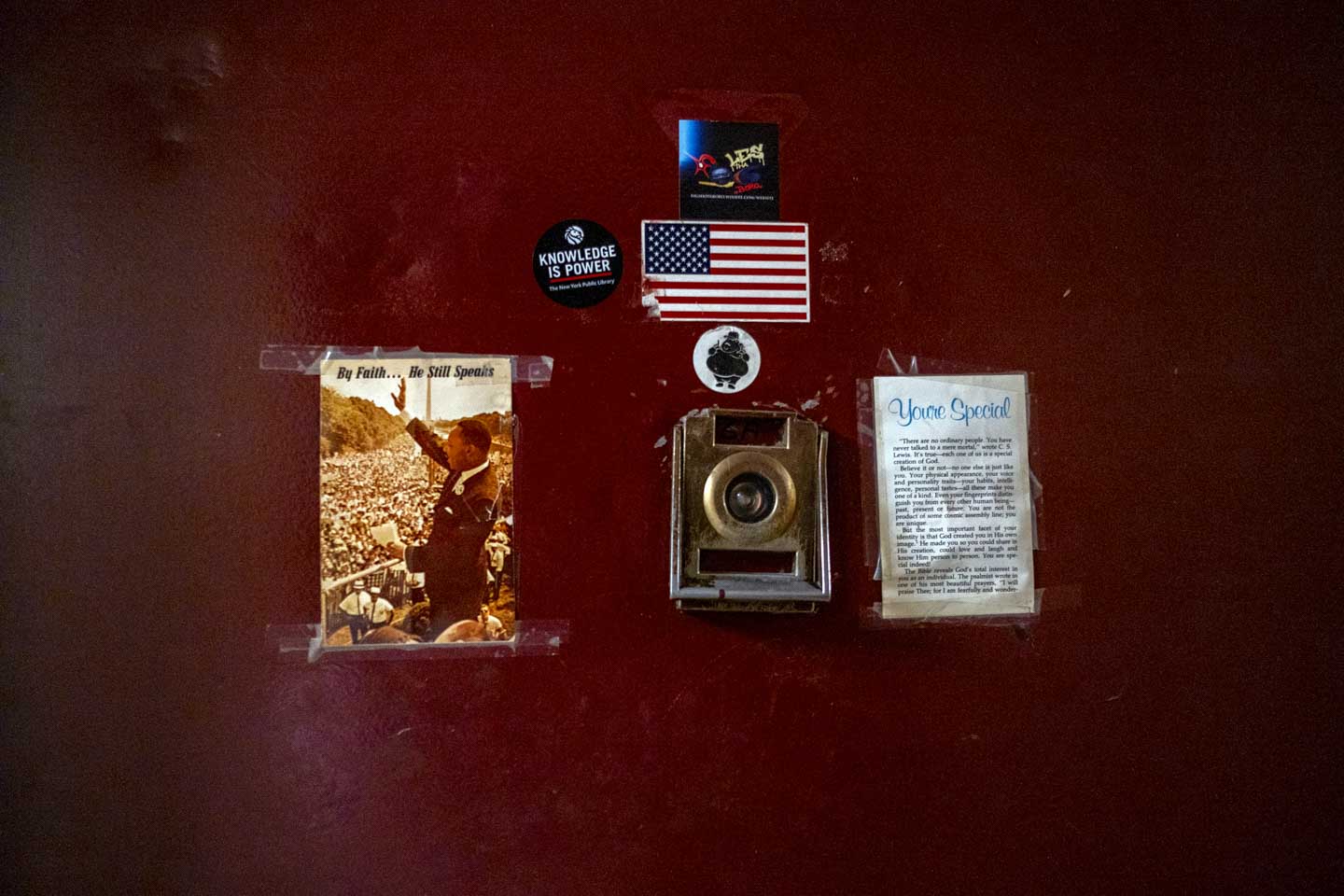 Turquoise is laying the foundation for a career in civil service, majoring in urban policy and planning at Hunter College and working as a community organizer for Assembly member Harvey Epstein. “As we see gentrification happening,” she told me, “we don’t want to feel like our communities are changing without our control.”

Turquoise in her hallway. (Destiny Mata)

“I’m just a community-driven kind of gal, so one of my biggest concerns around the elections is that the community is aware, that people are aware of the voting process and are educated about how that impacts them. Even if people choose not to vote, I’m very big on freedom of choice, to me the point is to be informed.” 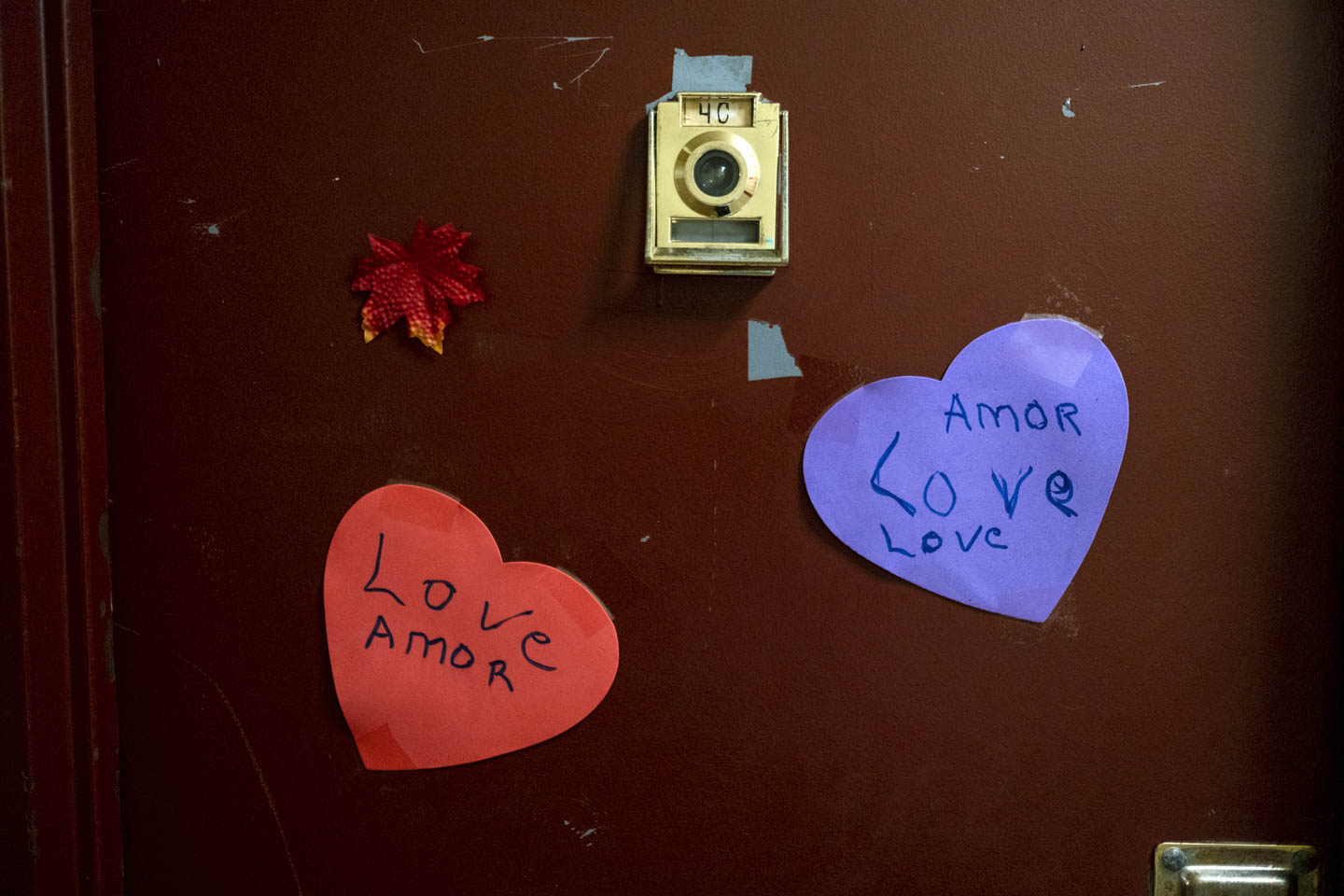 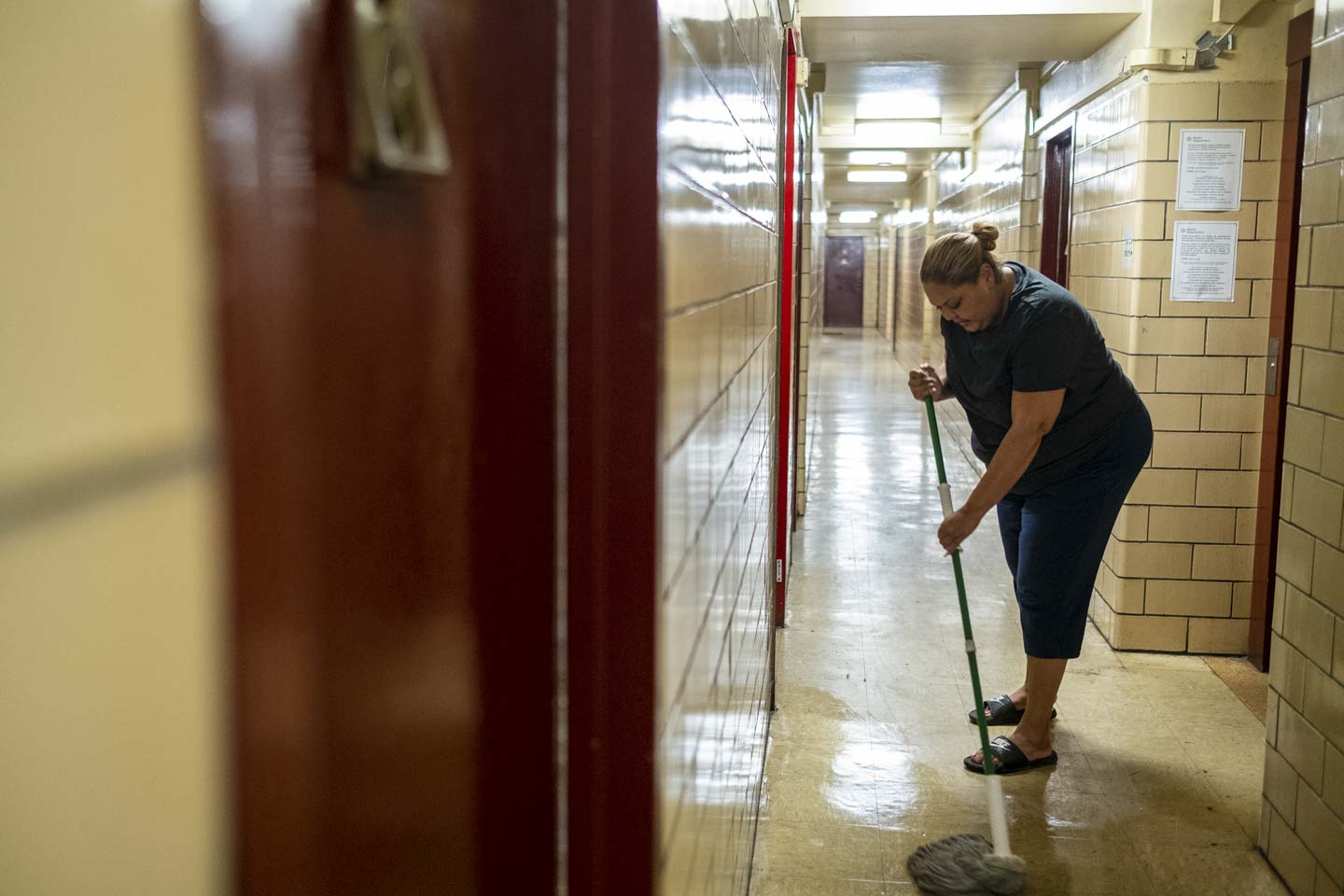 Camille Napoleon takes pride in her home and extended family of neighbors. Napoleon mops her hallway weekly to keep her floor clean and sanitary. (Destiny Mata)

As a leader of the Tenant Association of Baruch Houses, the largest NYCHA development in Manhattan, Camille Napoleon takes pride in her home and extended family of neighbors. During this election, she personally took a group of first-time voters from Baruch to the polls to encourage and support them as they cast their ballots. When the pandemic shut NYC down in March, Camille was one of the first leaders to step up on the front lines, rallying a team of volunteers and setting an unparalleled standard of what true community looks like. What began with distributing emergency food boxes to seniors and vulnerable neighbors transformed into a well-organized, efficient system that has blessed thousands of people in need with essentials—and it continues through this day. 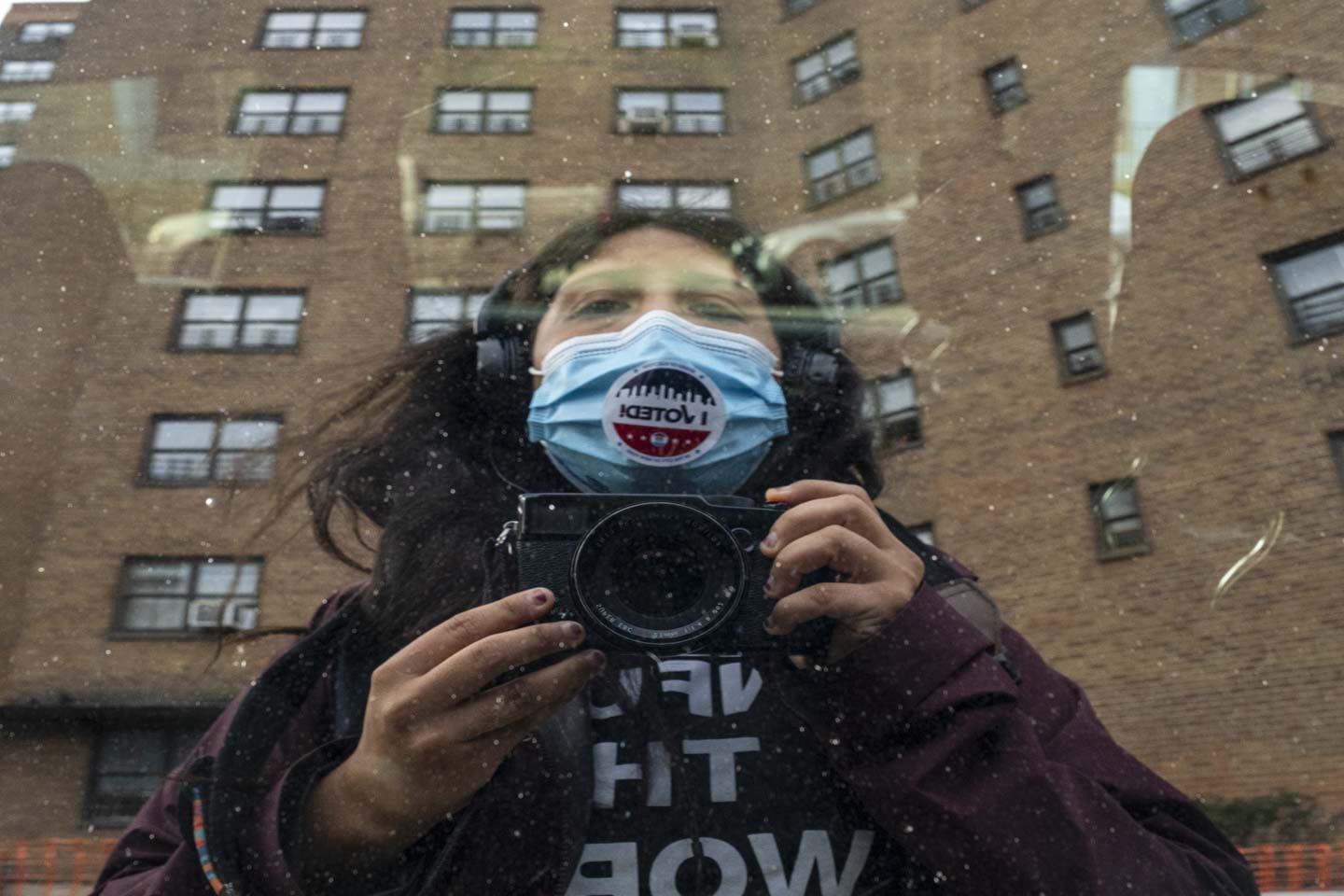