Conventional wisdom holds that Democrats are doomed to defeat in this year’s midterm elections. It is an article of faith that the party that controls the White House automatically loses seats in the next election, so much so that members of the Biden administration are already hiring lawyers in anticipation of needing to fend off investigations by a Republican-led Congress. But such an outcome is not a foreordained law of nature, and Democrats have previously defied the odds—most notably in 1998. The lessons from that contest offer valuable insight about how to maintain Democratic control of the House of Representatives this year.

During Bill Clinton’s second term as president, Democrats shocked the pundits (and, quite possibly, themselves) by increasing their numbers in Congress instead of losing seats. That outcome rocked the Republican Party, with The New York Times writing that the GOP was “stunned by the Democratic resurgence in the midterm elections,” adding, “The Democratic victories were even more remarkable in a year marked by the monthslong scandal over President Clinton’s affair with Monica S. Lewinsky.”

What 1998 proved—and what has been regularly re-affirmed over the past two decades—is that midterms are decided by which party does a better job of getting its supporters to the polls. This data-driven truth runs counter to the popular narrative that fickle swing voters tend to turn their wrath on the incumbent party as a way of showing dissatisfaction with the economy and unpopular public policy choices.

The incorrect understanding of voter behavior was distilled in a FiveThirtyEight article earlier this year titled, “Why The President’s Party Almost Always Has A Bad Midterm.” That piece posited that “the most compelling explanation for the midterm curse is the ‘presidential penalty,’ whereby some voters change their minds and vote against the president’s party.” Barack Obama and his top advisors subscribed to this flawed understanding of voter behavior in the 2010 midterms, with Obama describing his party’s catastrophic losses as “a shellacking.” One of his top strategists, David Axelrod, wrote in his book Believer that Obama’s advocacy for the Affordable Care Act “had ignited a blazing grassroots opposition that would cost him his House majority.”

All of that makes for a nice narrative—which is why the media so hungrily embraces the provocative storyline—but it is absolutely not what happened. Democrats did not lose the House in 2010 because the voters recoiled against Obamacare and punished the president’s party—while plenty of people did hate the idea of people of color being able to afford health care, those haters did not constitute a majority of Americans. What happened in 2010 is that after turning out in record numbers to elect the country’s first Black president, Democratic voters thought their job was done and stayed home in record numbers, leaving the polling places to the rabid Republicans. This chart shows just how dramatically Democratic voter turnout plummeted in 2010. 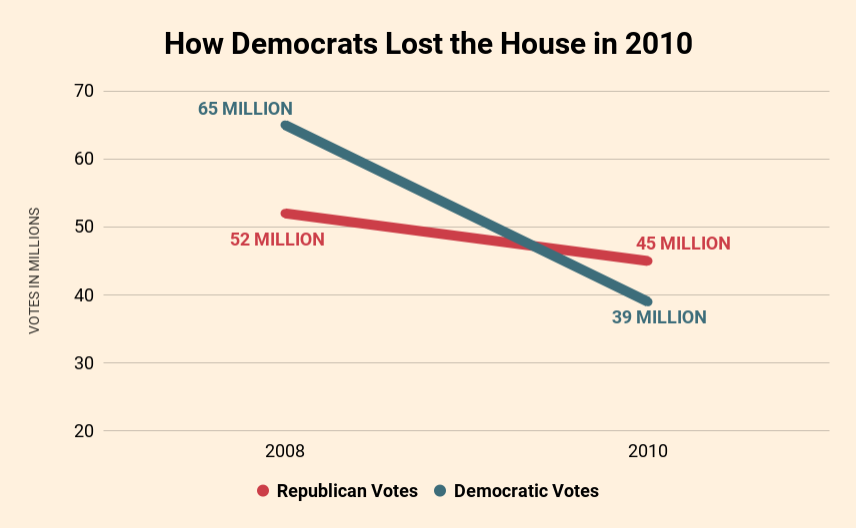 The importance of voter turnout is also the primary takeaway from the 1998 election. That year, the Democratic Party increased its ranks by four seats, ousting four Republicans. (Technically, they flipped five seats, but the fifth was in a Democratic district that was temporarily held by the Republicans as a result of a fluke in a special election.) The most notable data point from the 1998 contest is that in the seats that changed parties, a higher percentage of Democrats came back out to vote than did members of the Republican Party. The chart below shows the same pattern and tells the same story as the 2010 election—voter turnout determines electoral outcomes. 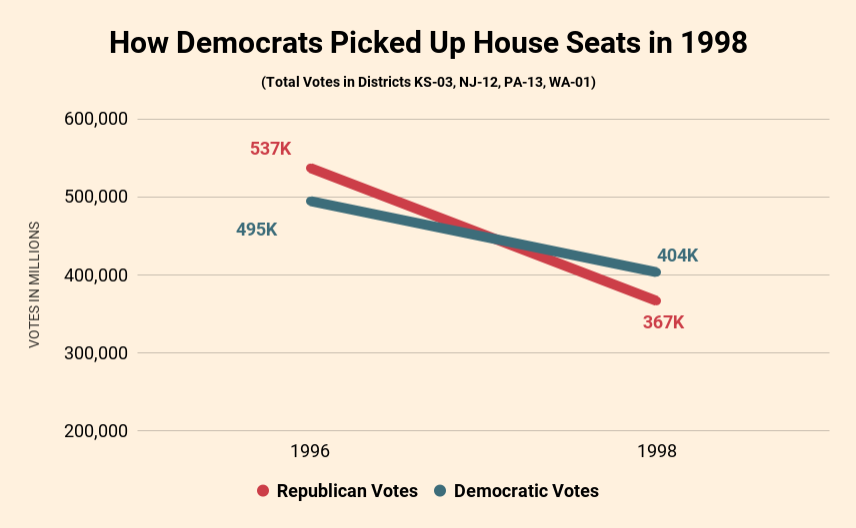 It is possible that the Republican witch-hunt that resulted in Clinton’s impeachment over lying about a sexual encounter played a role in the political environment, but not in the way many thought. Then-Speaker of the House Newt Gingrich suspected that Republicans had underestimated “the degree to which this whole scandal became just sort of disgusting by sheer repetition.”

But as the data shows, there is little evidence of people switching their support to back Democrats. What is far more likely is that the ferocity of the Congressional Republican attacks sated the bloodlust of their voters, resulting in the kind of complacency that would plague Democrats in 2010. Satisfied that they didn’t need to send a message, they stayed home. In turn, the attacks on Clinton may well have motivated Democrats to turn out in larger numbers to defend the man they had just re-elected two years earlier. The degree of Democratic motivation and mobilization in response to the impeachment attacks was reflected in the grassroots surge that resulted in the founding of the online activist organization MoveOn. (The very name of the organization comes from their petition, signed by hundreds of thousands of people in 1998, urging Congress to “Censure President Clinton and Move On to Pressing Issues Facing the Nation.”)

Therein lies the most important lesson for Democrats. In order to win in the midterms, they must sound the call to arms and summon their supporters to join the fight. The Republicans are waging all-out political war at the state level against pretty much anybody who isn’t a cis straight white Christian male, and Democrats respond by essentially ignoring the attacks or issuing meek and mild expressions of disapproval. What they should be doing is responding in kind, issuing full-throated defenses of the policies flowing from the conviction that this is a multiracial democracy and not a white nation.

If they do so, they will win and hold their majority in the House of Representatives, where they need 218 votes to maintain control. Biden won the most votes in 227 of those districts, nine more than a majority. But Democrats must inspire those voters to come back and vote in the midterms, and they must invest massive amounts of money in the civic engagement organizations with the best track records of mobilizing voters to the polls. The default position of spending hundreds of millions of dollars running defensive television ads trying to reassure swing voters is a losing strategy rooted in an incorrect understanding of voter behavior. What the 1998 midterms showed is that maximizing turnout is the path to winning in the midterms, and it is not too late to learn that lesson and course correct.