A line of black residents waiting for distribution of relief supplies during the 1937 Ohio River flood. (Margaret Bourke-White / Wikimedia)

EDITOR’S NOTE: In the Fall of 2021, a group of students at Wake Forest University took part in a class on Data-Driven Advocacy. Their objective was to find a question that was broadly relevant to inequality, answer that question using basic tools of data science, and convincingly communicate that answer clearly to a broad audience in a partnership with the Puffin Nation Fund Writing Fellowships. This article is the first of the final products that came out of that course. The authors sought to understand whether home ownership was a source of financial stability during times of economic hardship, such as the recent Covid pandemic. As you will see, the answer is more complicated than the mythos of the American Dream.

Owning a home remains a key part of achieving the American dream. People in the United States are taught to believe that homeownership is a sign of success, and this dream is about more than personal fulfillment. Homeowners traditionally enjoy significant economic benefits like tax breaks for mortgage payments, capital gains exclusions, subsidies, and other financial tools that are not available to those who rent their homes. Home equity credit also allows homeowners to draw on the value of their property for liquidity in times of crisis, such as a health emergency or unemployment.

While there are assistance programs for renters—like the Section 8 housing program—they are plagued by long waiting lists and scant availability. Only one in four households in the United States that qualifies for such assistance actually receives it. According to the Federal Reserve Bank, the typical homeowner had a net worth of $255,000 in 2019, compared to a mere $6,300 among renters.

The extreme financial struggles created by the Covid pandemic offered a glimpse at how these differences can play out. According to the Bureau of Labor Statistics, unemployment spiked from 3.5 percent in February 2020 to 14.7 percent in April 2020. Homeowners made widespread use of their advantages during this time. A study from The Wall Street Journal found that American households saved $5.3 billion by refinancing from January to October of 2020.

But how much did these protections help homeowners during the pandemic? Were they more financially secure than renters? Using data from the Household Pulse Survey conducted by the US Census Bureau, we were able to compare both groups’ financial confidence. The HPS has been collected bimonthly since April 2020 and measures the influence of Covid on employment status, food security, and housing security on individual households.

Because income and homeownership are correlated, we sorted respondents who said that they were either “very confident” or “moderately confident” that they would be able to pay their next rent or mortgage payment on time into brackets of low-income (less than $50,000 per year in household income), middle-income ($50,000 to $150,000), and high-income (more than $150,000) before comparing them. 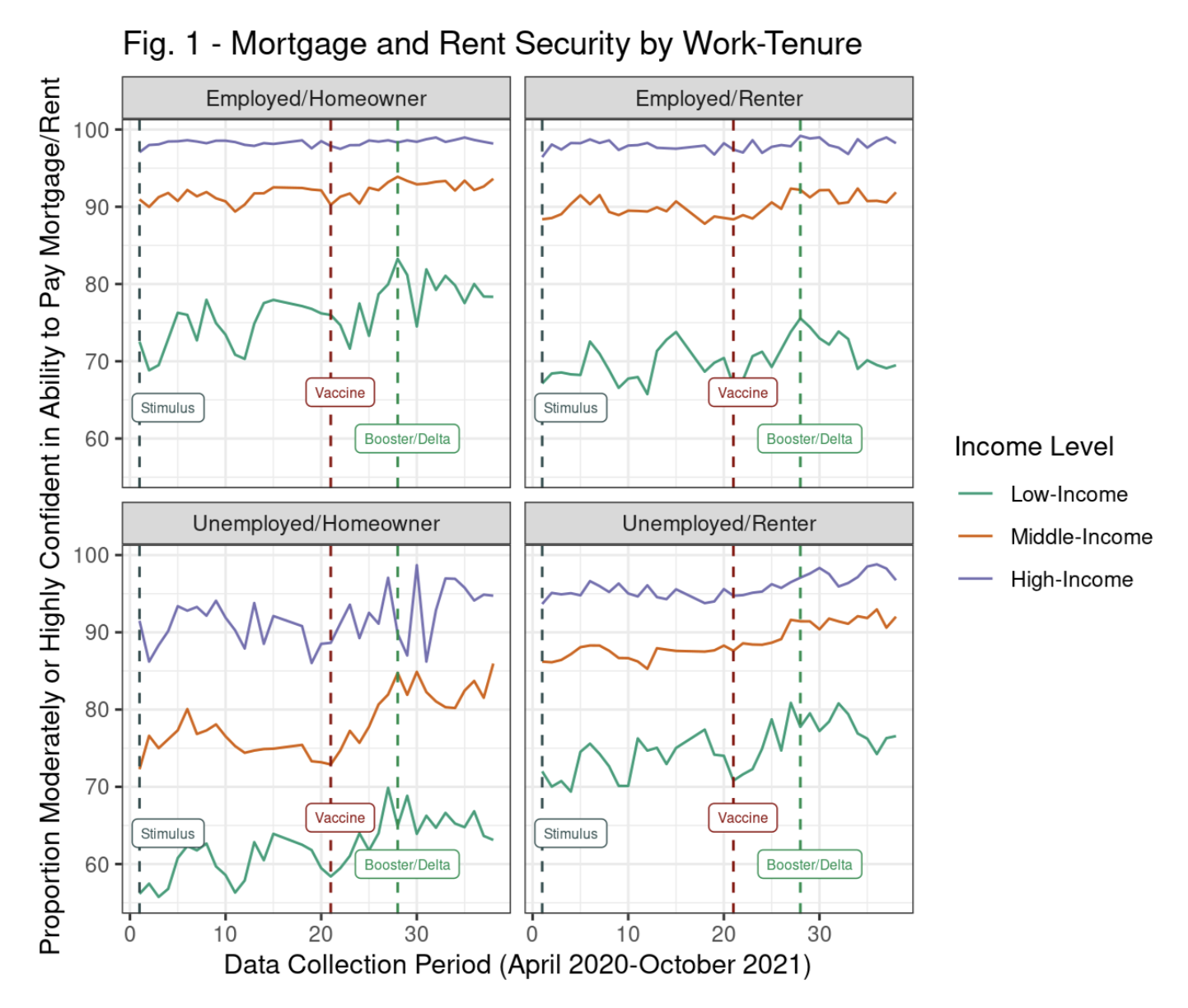 The x-axis of Figure 1 shows the time frame in which data was recorded, numbered by the biweekly collections. For example, period 10 represents the 20th and 21st week after collection started on April 23, 2020. We also added vertical lines at important milestones during the pandemic: the first stimulus check being sent out to qualifying households after the signing of the CARES Act (mid-April 2020), the first vaccines being rolled out (December 2020), and conversations about the booster shot as well as fear centered around the Delta variant in the United States (August 2021). The y-axis shows the proportion of people who reported feeling moderately or highly confident that they could pay their rent or mortgage during the specific two-week period.

Surprisingly, the data shows that unemployed homeowners had the lowest financial confidence levels of any group, regardless of income level. Their confidence was also highly variable week-to-week, even among the higher income groups. This contradicts the common expectation that homeownership automatically leads to more financial stability.

On the other hand, employed respondents who owned a home had consistently higher financial confidence than renters had with comparable income. Thus, while homeownership can indeed increase financial stability, mortgages can cause even more of a financial burden if the owner is not prepared for a period of unemployment. 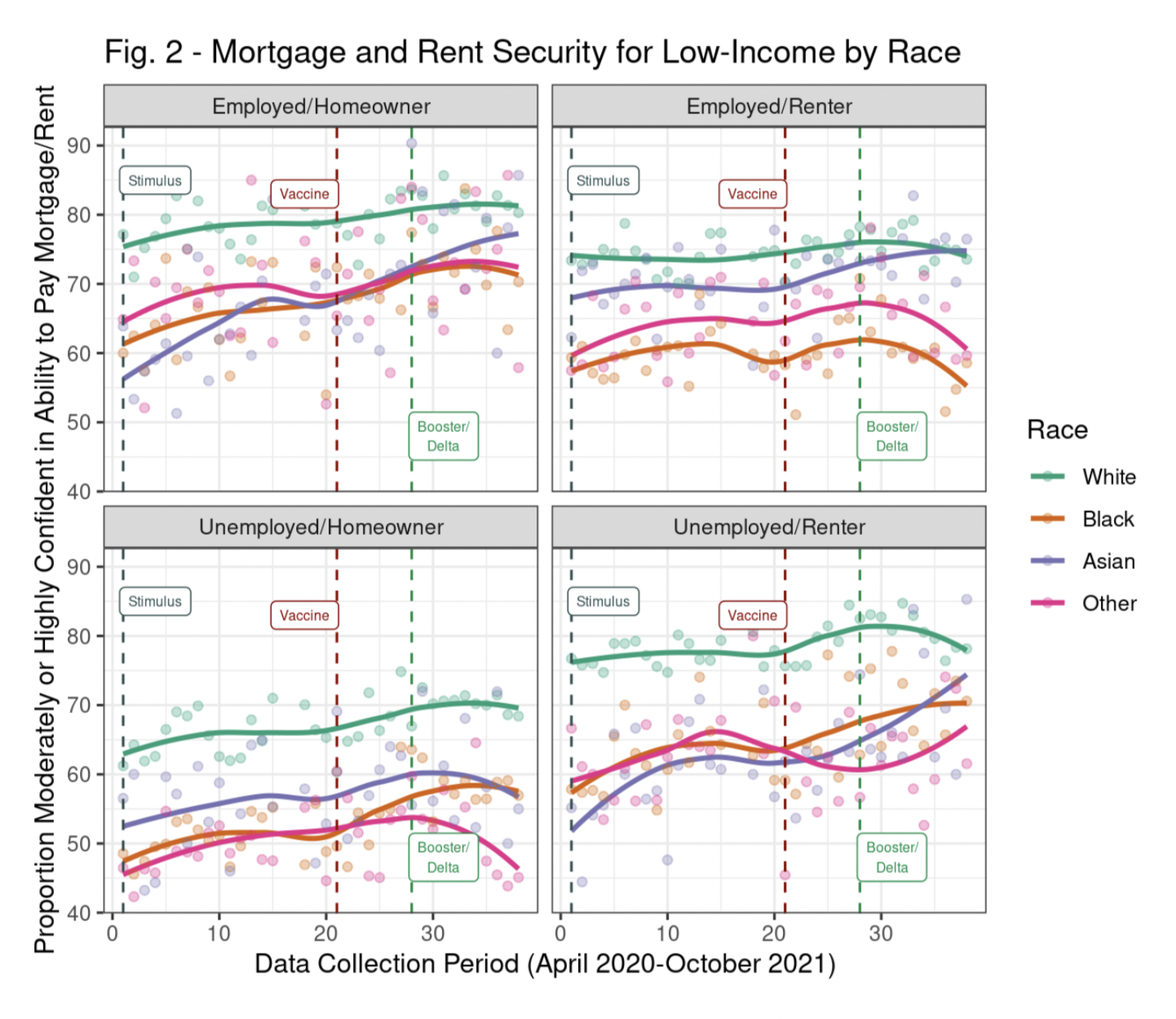 Figure 2 shows financial confidence among low-income respondents (those with less than $50,000 per year in household income) by self-identified racial group. Employed homeowners in any group were almost always more confident than employed renters in the same group; unemployed homeowners were less confident than unemployed renters. This was not true among Asian respondents at the beginning of the pandemic, when homeowners were equally or less confident than renters, but had become true by the end of the pandemic. Perhaps unsurprisingly, non-white racial groups had lower financial confidence no matter their work-tenure status.

On the other hand, unemployed non-white homeowners are the least financially confident group overall. Thus, mortgages can also be a disproportionate burden for racial minority groups in particularly difficult circumstances.

The pandemic has disrupted most facets of American life, but it has not affected all groups equally. Homeownership can be extremely beneficial and help generate multi-generational wealth, but it does not seem to be an automatic path to financial confidence. Owning a home and being employed is often perceived as an indication that someone is financially stable and successful, but our results call into question how we typically think about financial stability.

Perhaps some homeowners were unaware of options and tools that could have increased their financial security, such as home equity lines of credit and refinancing, or were uncomfortable pursuing them. According to the Federal Home Loan Mortgage Corporation (Freddie Mac), “even though a higher proportion of Black and Hispanic borrowers have a financial incentive to refinance, they refinance their mortgages at substantially lower levels than White borrowers.” Those seeking to buy a home—and those encouraging them to do so—should ensure that their purchase will be a financial asset instead of a liability during times of financial hardship and institutions should ensure that they are serving the groups that need it most by providing ample information and access to credit and capital on a truly equal basis.