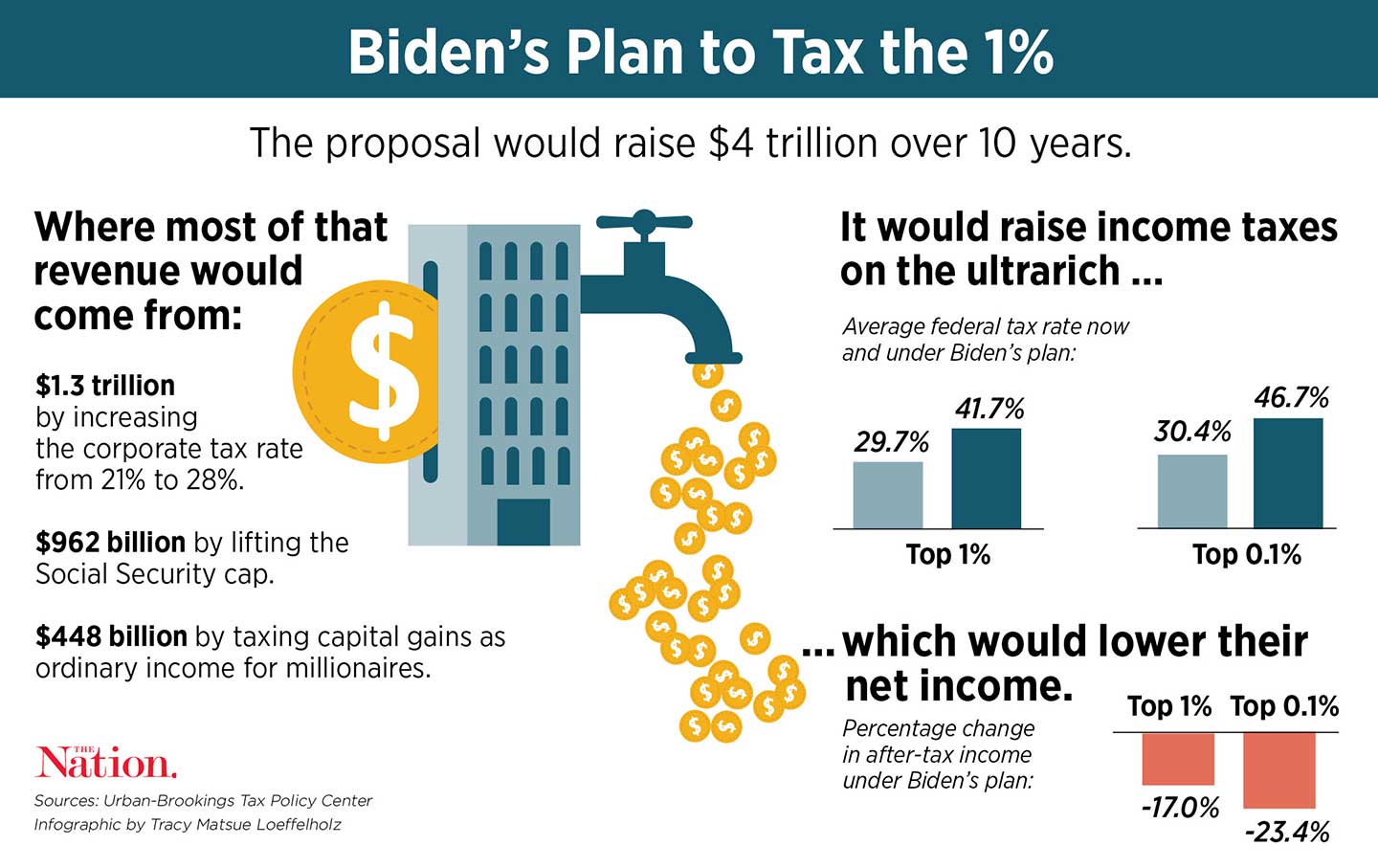 The Democrats’ 2020 presidential primary race was obsessed with taxes. There was the public debate over how to pay for Medicare for All. There was also the insider dispute among experts, no less contentious, over the feasibility and desirability of a wealth tax. Yet, as was often the case during the primaries, these discussions rarely included the person who was leading in the polls for almost the entire race: Joe Biden, whose tax plan is a serious proposal to reduce the power and income of the 1 percent. The former vice president’s bold scheme provides a useful reference for where the tax discourse among progressives should go next.

We Can’t Save the Economy Without Universal Child Care

According to the Tax Policy Center, Biden’s plan would raise upwards of $4 trillion over 10 years, similar to the amounts that would be raised by a wealth tax. And like the wealth tax supported by Senators Bernie Sanders and Elizabeth Warren, the money would come entirely from those at the very top of the income distribution. The plan would do this by increasing the corporate income tax from 21 to 28 percent and the top marginal rate for those making over $400,000 a year from 37 to 39.6 percent, reversing most of Donald Trump’s tax cuts. It would also remove the cap on Social Security payroll taxes for those making above $400,000, generating revenue for this vital program for low-income retirees.

But the biggest difference from the status quo is that the plan would increase taxes on capital income. Instead of giving a preferential lower rate to those who make their income from owning wealth rather than working, Biden’s plan would tax the capital gains and dividend income of those earning more than $1 million as regular income at the increased 39.6 percent rate. It would also close inheritance loopholes, including one known as step-up in basis, which allows elites to shelter increases in wealth from taxation at death. Such tax rules drive the intergenerational transfer of wealth among the ultrarich. All told, Biden’s tax plan would reduce the after-tax income of the top 1 percent by around 17 percent. The results would be concentrated among the top 0.1 percent, whose after-tax income would fall an estimated 23.4 percent.

For the left, there are three important questions that follow if this becomes the new baseline of the Democratic Party’s tax agenda. The first is whether it is necessary to tax wealth directly rather than tax income from wealth. One advantage of Biden’s proposal is that it would be easier to execute and would more easily survive a challenge in courts stacked with Trump-appointed judges. Another is that as income taxes become more aggressive, they start to do the work of a wealth tax. As Greg Leiserson of the Washington Center for Equitable Growth explained to me, the line between wealth and income from wealth blurs if that income is vigorously taxed. If Biden’s plan is fully implemented, it could significantly reduce wealth inequality. On the other hand, if executed poorly or with weak enforcement, it would make the case for a wealth tax better than any proponent could.

There is also the question of whether we should be focused on taxing people broadly or concentrating taxation on those at the very top. Biden’s plan forgoes the first option and aims its taxes at the very rich. For the time being, there is significant revenue to be raised with this approach, which would deliver more than enough to pay for free public college, universal day care, and a child allowance and to liberate many other aspects of our lives from the market.

Given low interest rates and a severe recession, there’s no pressure on the left to make the case for broad-based taxation. To the extent that taxing the rich comes up in the context of austerity or a bipartisan bargain to balance the budget, it should be rejected. Interest rates have been low for decades, and with pressing political issues to address, the main focus should be on how to spend. The prospect of raising taxes on the rich, however, should remain. Taxes don’t just raise revenues; they also structure the income distribution. And raising taxes on the rich would help stop the economy from simply channeling income to executives and owners. Taxes are about determining who benefits from the economy, and for too long, that has been only the rich. A sharp increase in taxes, as the Biden campaign has proposed, would push back significantly against that.