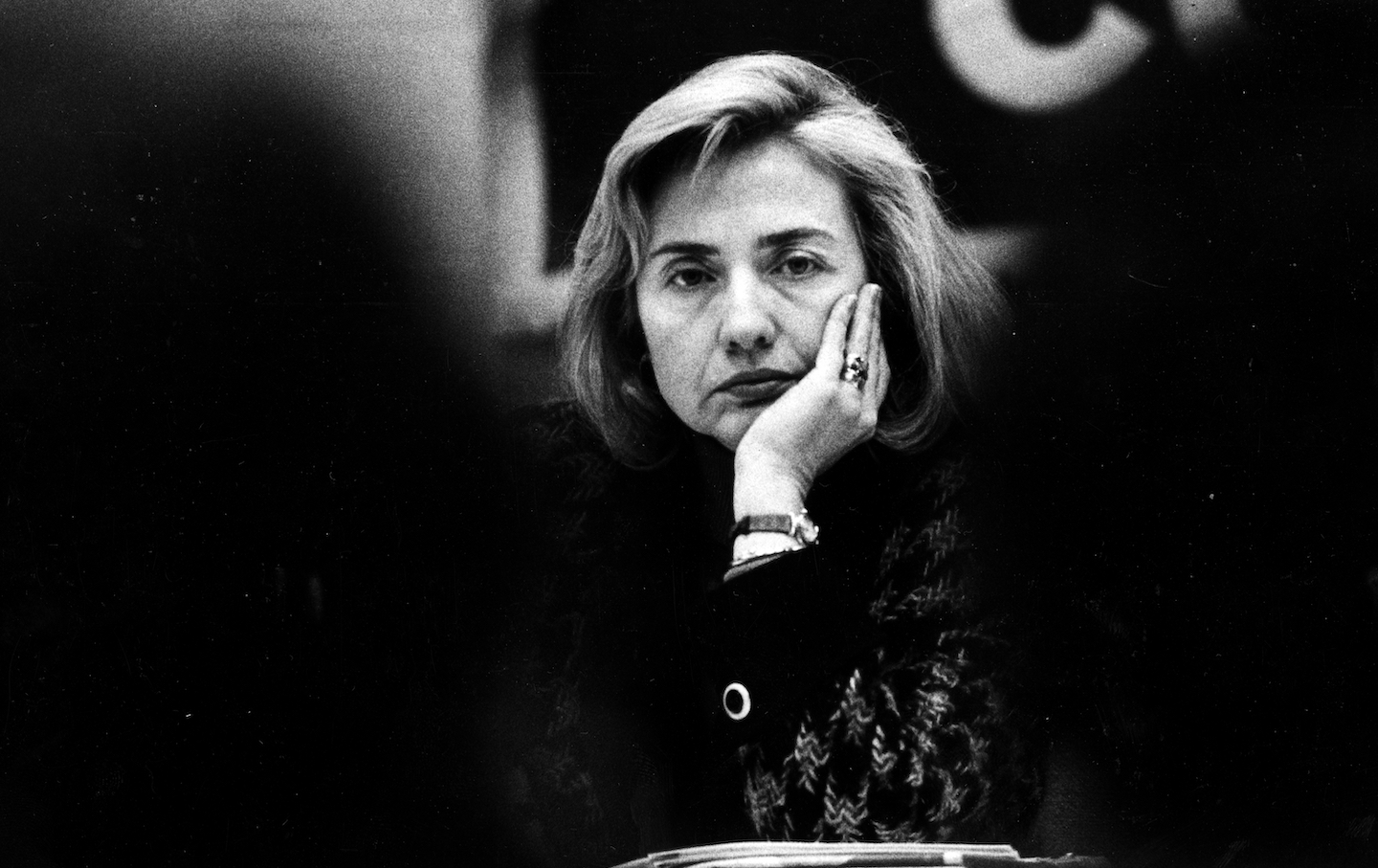 Let’s get it out of the way: There’s a lot of sex in Rodham, mostly in the novel’s first third, when Hillary Rodham and Bill Clinton are twentysomethings deciding whether to get married or call it. The sex scenes are both startling and pedestrian, frank and prim. They’re titillating, like celebrity gossip, and excruciating, like walking in on your parents. They’re entertaining, obviously, and even intentionally comic. Bill plays “When the Saints Go Marching In” on the sax, naked. He makes her climax while she’s in the passenger’s seat on the road to Fayetteville, and she says, “I don’t think I should do anything while you’re driving. But when we’re home, I really, really want to make you feel as good as you make me feel.” It’s the kind of soft-porn flatness that somehow bends all the way back into corn-fed innocence. The narration is so stilted, so dorky, it inspires fondness: Hillary the late bloomer, the nerd asked to prom by the jock. In bed together, she thinks, “with a kind of granular precision, of the unlikely sequence of events that had made our lives intersect.”

This all has to be said, because physical chemistry is key to Curtis Sittenfeld’s whole theory of Hillary Rodham and what made her fall for a cheating narcissist like Bill Clinton. But their romance can’t be played only for laughs—it’s got to feel like a live wire, throwing off a dangerous spark. Otherwise, the arc of Hillary’s political destiny, as imagined in Rodham, will lack tension. And otherwise, it would be hard to forgive the real-life Hillary, to understand her as basically admirable were it not for her central sin: falling in love.

Instead, Sittenfeld’s Hillary takes the road not traveled—remaining Rodham, getting to live in the sunshine. Her ex becomes Arkansas’s attorney general, then a twice-divorced tech billionaire running for president a couple of times without success. She becomes a law professor, then one of six women elected to the Senate in 1992. As part of a cohort, she finds surer footing in solidarity, in bipartisan comradeship and the work of legislating. Sittenfeld ensures that her new timeline has costs, namely the career of Illinois Senator Carol Moseley Braun, who loses her election to Hillary. In this world, it takes until 2015 for a black woman to become senator, and as a result, Hillary wrecks her relationship with her mentor Gwen (standing in for the activist Marian Wright Edelman). This subplot, pitting white feminism against racial justice, feels dutiful, an acknowledgment that no political career could be stainless.

It’s hardly a spoiler to say that this Hillary eventually wins the White House. Her ascent is narrated without grandeur: Often, she realizes that she wants to run for the next higher office because she’s seen something on television—the Clarence Thomas confirmation hearings or a pop star declaring herself “top-of-game alone.” She claims, sunnily, that she’s driven by “being able to tangibly and directly take on the problems I had spent my adult life thinking about.” Less flatteringly, she admits that being a senator makes her feel “important,” much like when she captained her school safety patrol or spoke at Wellesley’s commencement. This characterization feels undermotivated, bloodless—as if anyone would believe that such aspirations are something a person can fall into accidentally, or by some providence, rather than by her own design.

This idea of political striving, parked at the intersection of Tracy Flick and Leslie Knope, is possibly endearing and conspicuously small-bore. It refuses to admit anything that might be termed ideology. But perhaps that’s to be expected. More peculiarly, Rodham lacks drama. In the age of the #Girlboss, when appetite and excess are lauded as feminist ends in themselves, is it possible to make women’s ambition seem not just benign but even inert? The novel’s final lines observe that women finally know they can be president “because they’ve seen it happen.” It casts unremarkability as the ultimate—and unattainable—happily ever after.

Rodham’s implicit logic is easy to follow: If only the real-life Hillary hadn’t married Bill, then she never would have been complicit in his sexual predation or embroiled in his scandals. If only she hadn’t become the first lady of Arkansas and then of the United States—if she had been, in short, less singular—she wouldn’t have drawn the hostility that warped her. She would live uncramped by either reflexive caginess or arrogant exceptionalism. She would be easier to love. This theory casts Hillary Clinton as wholly a creature of context—as someone who reacted to her circumstances more than someone who actively shaped them.

After her mid-20s breakup, Sittenfeld’s Hillary never again allows herself a swooning romance. But later in life, facing off against Bill (among others) in the 2016 Democratic primary, Hillary instead becomes half of an even odder political couple—with Donald Trump. Despite her personal distaste for the real estate magnate and frequent right-wing radio guest, she forms a strategic alliance with him. Trump becomes her campaign surrogate, making her seem less elitist and aloof and airing Bill’s dirty laundry on her behalf. It’s a bizarre narrative turn: In a novel that’s ostensibly about the gravity of personal choices, as Sittenfeld told People in February, this plot point reveals a deep fatalism. One way or another, it seems that Hillary’s fate is tied up with unsavory men. The only real question is whether she can disentangle herself.

Sittenfeld’s fantasy stops short of really imagining what a President Rodham would do with her power. There’s just one narrow paragraph on the very last page listing her administration’s greatest hits. These include reversing the Hyde amendment and overachieving in the Paris Agreement—wins that feel too sharply tailored, like a sleeve ending a quarter-inch short. Instead, the book’s most feverish daydreaming occurs, Sorkin-style, in scenes of verbal combat. Late in her Senate career, she tells off a radio shock jockey, finally ascending to her final form—what an admirer calls “IDGAF Hillary.” About 70 pages afterward, at a televised debate, she dispatches the controversies surrounding her at a stunning clip, reversing the mistakes of our timeline. In the 2016 general election, running against Jeb Bush, Hillary denounces the politics of her surrogate, Trump, as “deplorable” but spares his fan base. She vanquishes the “likability” question (“If you want someone to enjoy a beer with, you can go to a bar with your friend”). She admits a precise degree of fault when an aide, who once shaved her legs for her in the back of a car, accuses her of sexual harassment. (She apologizes for the woman’s discomfort while insisting that “an interaction can involve close physical proximity and not be inappropriate.”) Naturally, Hillary delivers all of this in one volley, off the cuff, and by the end of her speech she feels like “some haze had burned off, some distillation had occurred.” This suggests that what we really long for, deep down, is nothing more than the direct, face-to-face confrontation of sexism. In some other, better world, honesty alone vanquishes the enemy. 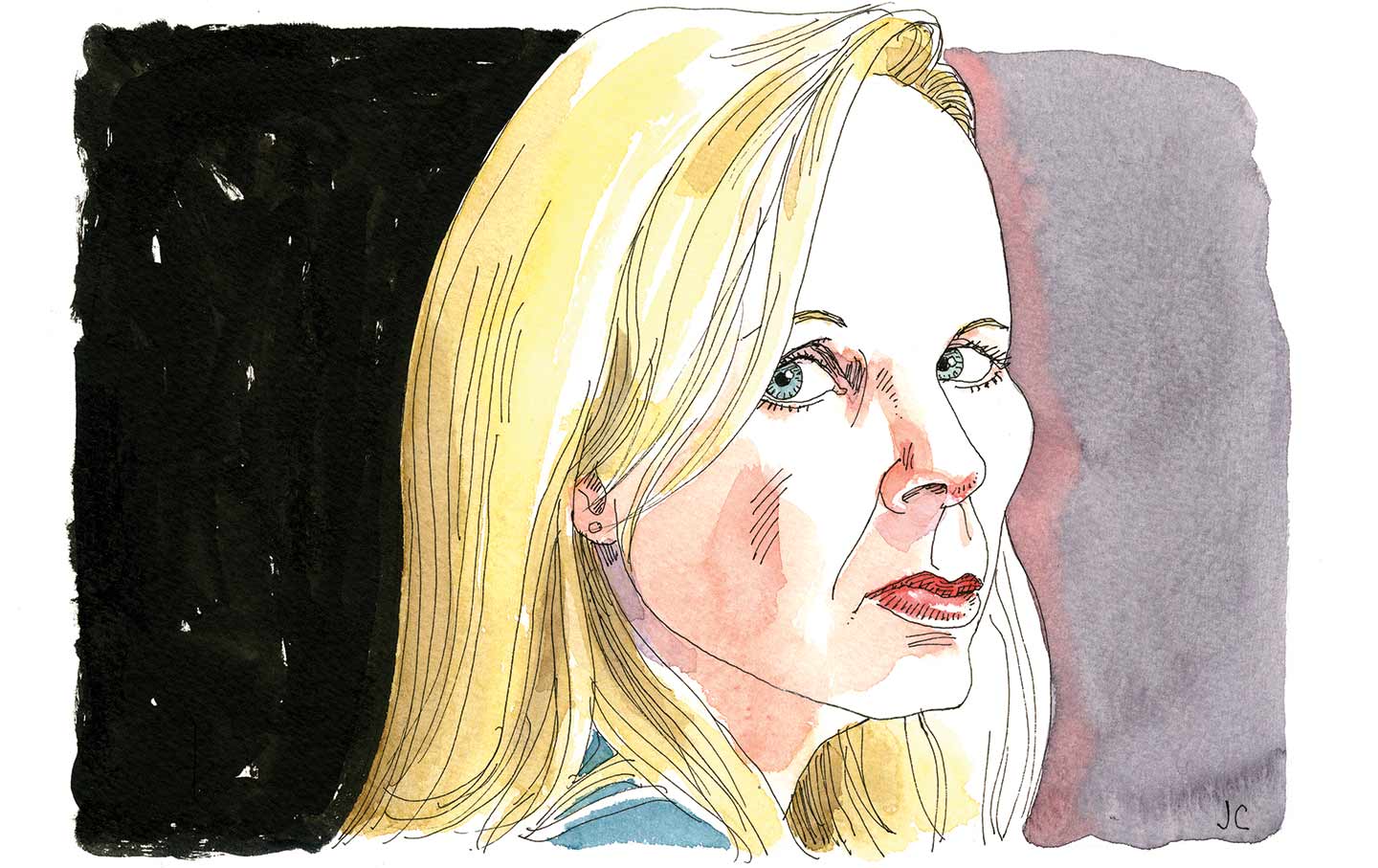 Sittenfeld’s work has often been cannily attuned to what one of her characters calls “small thoughts”—the thousand petty ways that people get under each other’s skins. In one short story, an MFA student baits his female classmate with the goad, “Great literature has never been produced by a beautiful woman. Name a book. I’ll wait.” For the rest of the party, she splutters the names of various writers, he declares them untalented or unattractive, and the narrator goes home feeling haunted. With deft economy, Sittenfeld demonstrates how easy it is to get stuck in even the dumbest traps: Their trick is to seem alluringly beatable. At her best, she breaks down social dynamics with the apparent casualness and efficiency of a home cook spatchcocking a chicken. And often, this has made her an excellent portraitist of everyday misogyny. But blown up to the scale of professional politics, her fine-grained observations lose resolution. In Rodham, the characters walk around radiating divine simplicity. They say things like “You’re awfully opinionated for a girl,” or “Hillary, no man falls in love with a woman’s brain,” or “You’re more like a boy than a girl…. The way you act and the way you talk.” (Only the last of these, amazingly, is uttered by a character who’s actually a child.) Maybe this is Sittenfeld reminding us that the operations of sexism aren’t always complex—often, they’re obvious and stupid. But then our heroine’s thinking is just as cartoonish. Her ideas come out as ingenuous thought bubbles, in transparent puffs.

This Hillary is meant to be all the more lovable for being literal. Sensing that a dinner meeting is not trending, as she’d hoped, dateward, she tells herself, “Do not preemptively take no for an answer. Do not decide your request has been rejected before it officially has.” Throughout, however, the narration is so flatfooted that it’s hard to accept it as an earnest attempt to evoke a real person’s consciousness. Sometimes it feels like we’re supposed to read Rodham as an artifact from an alternative universe—as if it were a political memoir, ghostwritten by a well-paid comms staffer. The one downside to being a senator? Fundraising—“but again, I was Midwestern enough not only to accept the downside to any situation but even to experience it with relief.” On her regime’s setbacks: “There have, of course, also been disappointments and failures.” And that’s it.

Bland, faultless equanimity constitutes the book’s dominant tone. It demonstrates how weird and hard it is to conceive of a Hillary without secrets, like picturing a turtle living out of its shell. And perversely enough, a Hillary who doesn’t trigger a million paranoid connections, real or confected—Whitewater and Vince Foster and Benghazi and extraterrestrials and the Clinton Foundation and the private server—is a Hillary whose choices are obvious, whose psychology is transparent and not worth prying into. As it turns out, if you believe that Hillary’s worst faults should be traced back to Bill, it becomes hard to see her as an agent with her own desires or political commitments. In Rodham, Sittenfeld sets herself an impossibly contorted task: imagining a Hillary who doesn’t inspire imagination. The resulting revisionism just ends up insulting everybody’s intelligence.

Ultimately, Rodham is most comprehensible as a fairy tale about a woman who knew what she wanted and then came to know better. Early on, the heroine wonders to herself, “What if I could lead a life that made me worthy of luck? What if getting what I wanted most could be a fuel for my own morality, and additive rather than unfairly advantageous?” And so she chooses a life of public service rather than romance. Wanting only what is good and then getting it: That’s truly having it all. More than “I love you” or even “Yes, Madam President,” the line that makes the heroine’s heart sing is when her ex says, “Oh, Hillary, you were never the one who needed forgiveness.”