For political cartoonists, Donald Trump is not just a challenge but a rival. Trump’s political success owes much to the fact that he’s a walking, breathing caricature. His entire career is a triumph of the image-maker’s art: Through manipulation of press coverage, ghostwritten books, movie cameos, and carefully edited reality-TV shows, Trump crafted an image of himself as the quintessential American wheeler-dealer, the billionaire with the popular touch.

As with any iconic figure, he is as much a stylization as a person. His face is rarely if ever in repose, instead constantly switching between now-familiar tics and mannerisms. His very grotesqueness, the shock of implausible hair and the strangely orange skin, make him distinctive, a useful trait in a profession that requires gaining and holding attention.

Trump is not the first cartoon president. Writing in Harper’s in 1984, the literary critic Hugh Kenner noted that Ronald Reagan was closer to being a puppet than a man. “Reagan’s successor might be Kermit the Frog,” Kenner argued. “The night Kermit filled in for Johnny Carson, no one noticed. Yes, we’re governed by caricatures, because we perceive by them.”

Cartoonists work by exaggeration. But how do you exaggerate what is already grotesque? How do you mock a human gargoyle? Matt Bors, one of the most talented political cartoonists around, proves he’s up to the job in his new collection, We Should Improve Society Somewhat, a gathering of satirical strips from the past few years.

One of the valuable aspects of the book is that it allows us to track Bors as he struggles with depicting Trump. The early drawings are competent but work merely at a surface level, with Trump as a blow-dried blowhard, a puffed-up bully no different from many other politicians. Over time, Bors moves away from verisimilitude, with his Trump becoming a sinister homunculus whose beach-ball head dominates a dwarfed body. Sweaty, purse-lipped, with hair that leaps up in unison with the steam coming out of his head when he’s angry, this version of Trump is an embodiment of porcine malevolence.

Throughout the Trump years, we see Bors letting loose more and more, moving away from strict reactions to the day’s events and increasingly inclined to borrow tropes from science fiction to depict the unfolding dystopia. Trump becomes Eternal Overlord Trump, presiding over a dying, post-apocalyptic planet. Wearing a face mask modeled after Immortan Joe from Mad Max: Fury Road, Trump achieves his true destiny as a monarch over a hellworld. In another strip, Trump is merely a giant floating head held aloft by a tiny robotic body. 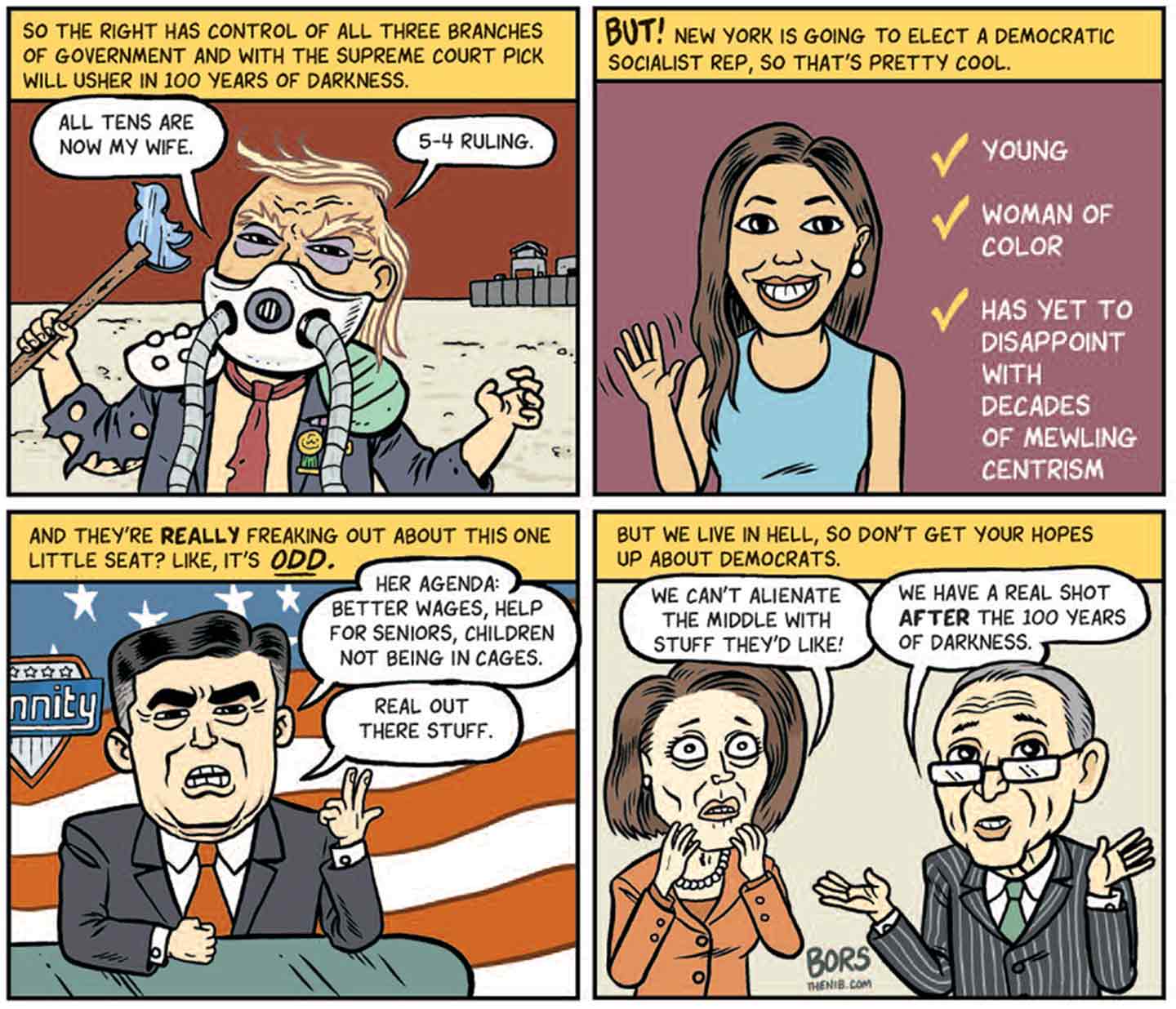 Many of Bors’s strongest strips are set in this dystopia, called the Wasteland, where the problems are even more severe than our reality—but political attitudes remain the same. In one strip, the citizens of the Wasteland hold a town hall meeting on the threat of “the swarms of mutant locusts stripping the flesh from the bones of anyone not wearing their armor.” It quickly devolves into an argument over whether the problem is real. “There’s always been locusts!” one citizen proclaims. “Maybe even mutant ones!” And what about the jobs? A man named Gorm, with a festering hole in his bald scalp, notes, “I earn my rations flamethrowing the locust hordes. You—you’d be rid of me!”

As a panel cartoonist, Bors belongs to the tradition of Jules Feiffer and Tom Tomorrow, artists concerned with narrative and characters. This is distinct from the dominant form for newspaper cartoonists, who generally do single-image caricatures riffing on daily news. As with Feiffer and Tomorrow, Bors is less interested in topical events than he is in the recurring attitudes that underlie politics.

Bors has a real gift for distilling reactionary thought patterns into recognizable character types. One recurring character, featured in the strip that gives the book its title, is Mr. Gotcha, a glib know-it-all who tries to refute social criticism by highlighting purported hypocrisy. Seeing someone posting a complaint about how Apple isn’t paying Chinese factory workers enough, Mr. Gotcha notes that this comment was “said on an iPhone.”

Bors sends Mr. Gotcha back in time. First, he sees someone complaining, “Cars should have seat belts!” He responds, “Yet you bought one. Hypocrite much? Owned.” Sent back to the Middle Ages, Mr. Gotcha hears an impoverished peasant say, “We should improve society somewhat.” Mr. Gotcha, pouncing out of a well, proclaims, “Yet you participate in society. Curious! I am very intelligent!” 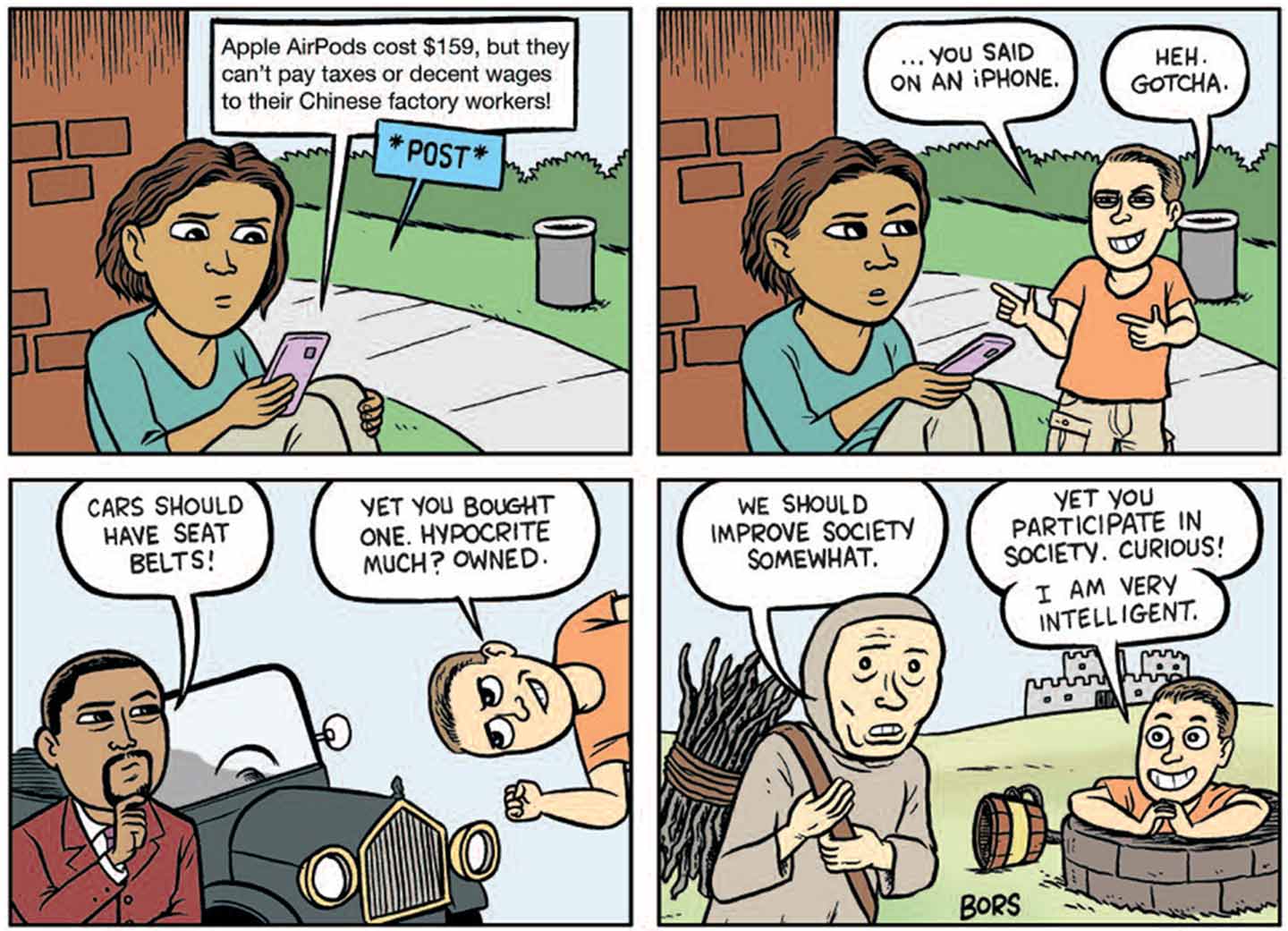 Mr. Gotcha is a telling encapsulation of an irritating figure we’ve all encountered, the glib points-scorer who prefers ad hominem to argument. Time and again, Bors invents characters who embody common attitudes. Mr. Gotcha’s cousin is perhaps the MAGA-head who, offended at Trump’s being called a racist, says, “That attitude is what’s pushing me to be racist!” With vacant-eyed fanaticism, he ends up getting a swastika tattoo. 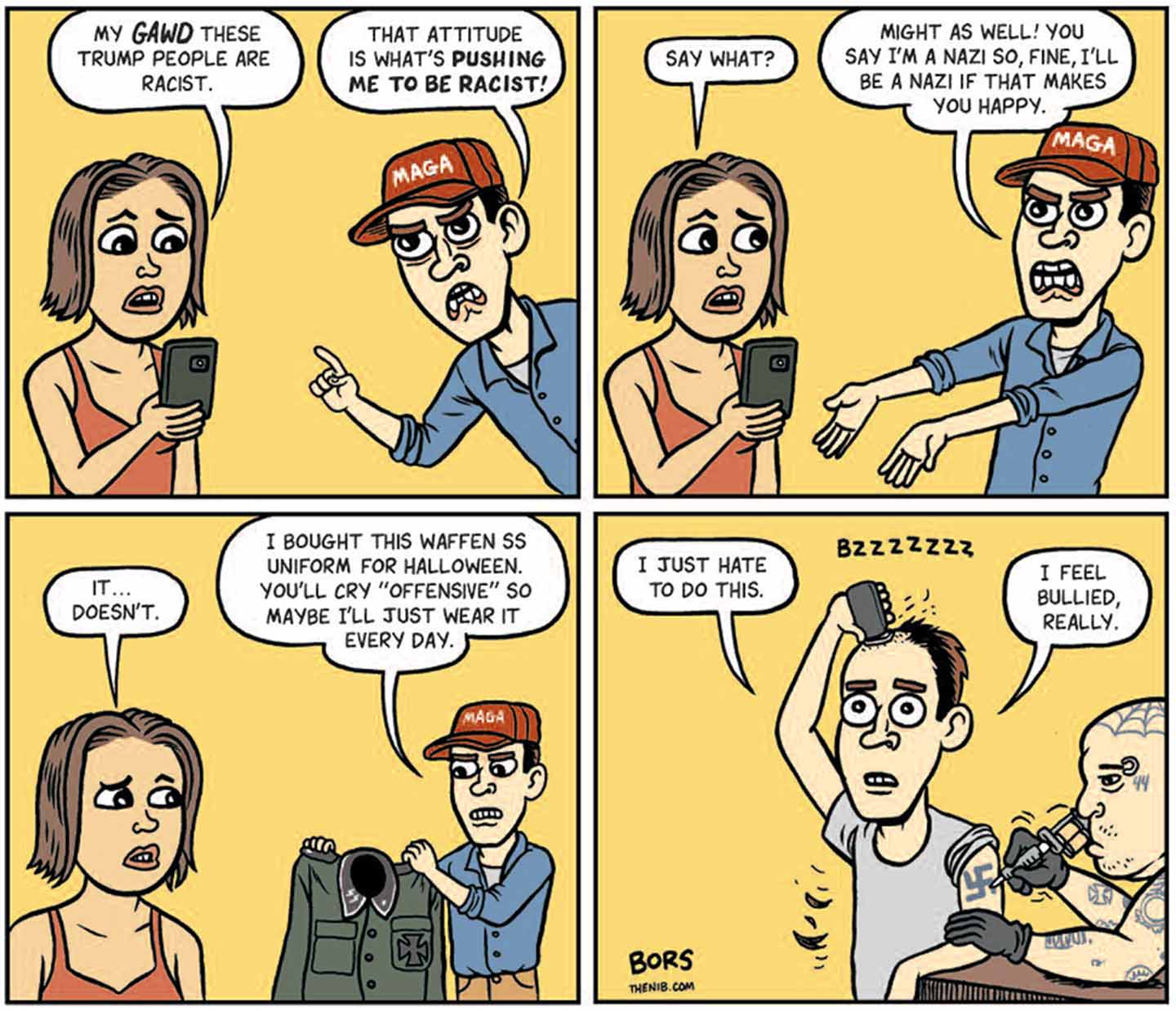 This focus on attitudes is the perfect approach to the Trump era. Trumpism isn’t really a coherent philosophy so much as a set of irritable mental gestures, a grab bag of reflexive sneers and catchphrases. Bors’s ability to give life to these attitudes, to make them visible and highlight how ridiculous they are, makes him the ideal portraitist of the Trump era.