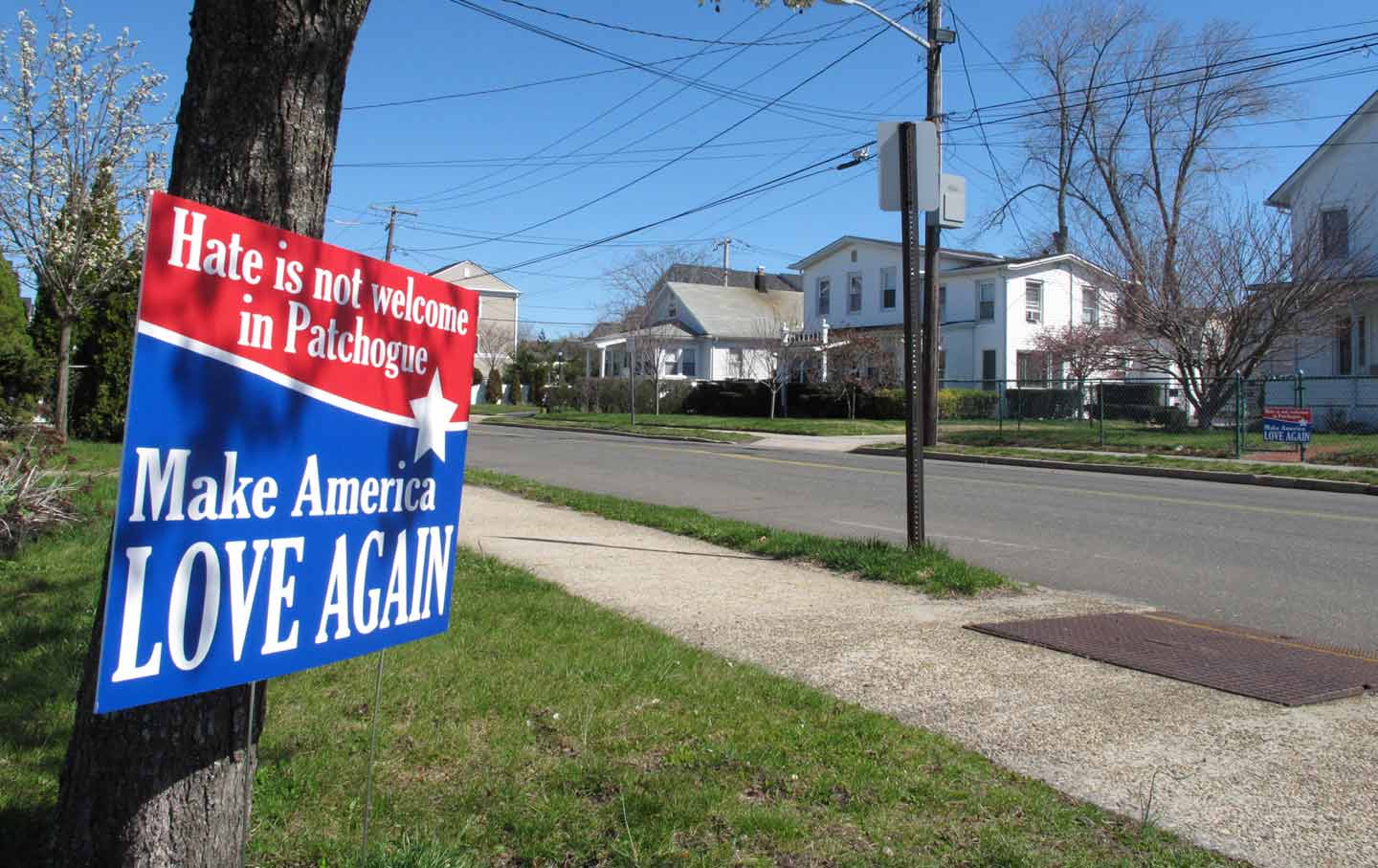 A sign sits near the site where Marcelo Lucero was killed in Patchogue, New York, on Wednesday, April 13, 2016. (AP Photo / Frank Eltman)

Where Donald Trump goes, protesters follow. By now that’s a given. But in the small Long Island town of Patchogue, where Trump passed through Thursday on his tour ahead of today’s New York primary, he drew more than demonstrators last week. He also attracted mourners.

Trump was in town to headline a $150-per-person fundraiser for the Suffolk County Republican Party at the invitation of its chairman, John Jay LaValle. Trump supporters waited outdoors for the event with signs of support for the Republican front-runner. A whole block away, down a street which police officers shut down, Trump critics were cordoned off in their own protest area. Except for when a handful of Trump supporters wandered over looking for a confrontation, police officers made sure that the two parties never met. And three blocks even further away, just as Donald Trump was set to speak, Joselo Lucero addressed a crowd of Patchogue residents who gathered for a vigil for his brother Marcelo at the spot where he was killed in a 2008 hate-crime attack. The three separate gatherings offered a window into how this election has played out across the country and, townspeople warn, a preview of what may await the rest of the country if Trump’s rallying cries go unchecked.

“To have someone so anti-immigrant come four blocks away from where my brother was killed, this is not easy for me,” said Joselo Lucero, through anguished tears. “This is a terrible day.”

Trump’s visit to Patchogue stirred up barely soothed anguish of Lucero’s violent stabbing; to many, Trump is whipping up the very anti-immigrant rhetoric that led to the Ecuadorian immigrant’s death seven years ago.

The lesson Patchogue residents have learned is that anti-immigrant rhetoric is not just harmless talk. The more that anti-immigrant sentiment, layered with xenophobia and anti-Latino racism, hangs in the air, the more it permeates a political culture. Kids pick up on it when the adults around them target one group of people for the color of their skin. Patchogue residents say Lucero paid with his life for people in town to learn that lesson.

It was a late fall evening in 2008 when seven local teens, including Jeffrey Conroy headed to the Patchogue LIRR train station to pick up one of their favorite pastimes: “beaner-jumping.” The kids would look for obvious immigrants to beat up and shout epithets and throw beer bottles at. Undocumented immigrants in particular—but what does an undocumented immigrant look like?—were prized targets because they were typically paid under the table and were known to carry cash on them. It wasn’t just kids; immigrants were run off the road and beaten, their homes were raided by local police; county executive Steve Levy defended police raids of immigrant homes, and warned that Southampton Hospital would close its maternity ward because women were arriving in the U.S. to give birth “free of charge.” When the teens came upon Lucero, who was with a friend, they punched Lucero, who reportedly swung back with his belt. Conroy, then 17 and a star athlete, pulled out a knife and stabbed Lucero in the chest. The teens fled and Lucero died in the street. The last words he heard were slurs.

In a report the Southern Poverty Law Center released almost a year after Lucero died, researchers found “abundant evidence that Suffolk County officials have contributed substantially to an atmosphere conducive to racial violence,” they wrote. Among them was Levy, the highest ranking local official and a mini-Trump of his town, who dismissed Lucero’s death as a “one-day story,” decried “poltical correctness,” and in the years prior targeted immigrants in Patchogue with punitive anti-immigrant actions and almost as bad, normalized a culture of anti-Latino sentiment.

In her book Hunting Season which examines the local forces that led to Lucero’s murder, journalist Mirta Ojito, confirmed as much. “Children are like sponges, and these seven people grew up a a time when there was a lot of anti-immigrant sentiment in Suffolk County,” Ojito told me in 2013 when her book was first published. “They would have been witnesses to the way immigrants were treated and the language used to describe them and their actions. And I think to a certain degree they were taught to dehumanize immigrants.”

“And when you don’t think of people as humans, you think of them as prey, and you can hunt prey.”

At the vigil for Lucero, the gathering of clergy, community leaders, and immigrants preached a message of inclusivity and solidarity with immigrants. Today’s primary election and Trump’s Thursday visit were surely the motivating factors for the vigil, but no one mentioned voting. No one stressed an alternative to Trump that they were supporting. The speeches, save for when Joselo Lucero pierced the chilly spring air with his cries, were straight-forward in their sincerity: love one’s neighbors, accept all comers, denounce the forces that would try to divide us.

The importance of the vigil for many was to show, with their presence, that they may have been Patchogue residents but that they did not condone the anti-immigrant climate which gripped the town. “I wanted to show my support. Not everyone thinks like [the boys who killed Lucero],” Alex Schropfer, 22, said. She said she went to school with Conroy and the other teens who were involved in the attack. “I came to support Marcelo Lucero’s brother and show that not everyone hates the way he did.”

“I knew when I went to school especially it was a big thing, people would say a lot of racist things against Hispanics, very racial slurs,” Schropfer said. “And I have to say I wasn’t surprised that it happened. I feel like they might have done it before but this time they took it too far, and obviously a man’s life was taken.”

Johny Once, an immigrant from Ecuador who’s lived in Patchogue for nine years, brought his wife and three children to the vigil in the same spirit. He confirmed that anti-immigrant attacks were a commonplace occurrence. People would yell at him from cars as they were passing, “Go back to your country,”—and Once remained mystified that townspeople, he said, “treat me like I’m Mexican.”

He demurred when asked if he had faced other kinds of attacks. “I see many things happen, I see guys call the police, and they let them go,” Once said. “The police say, ‘They are teens. They are too young.’ But it doesn’t matter.”

Those at the vigil stood in their own world, their cries and hymns never reaching the pro-Trump supporters four blocks away, or even the anti-Trump protesters down the block. There, about another hundred people gathered with homemade signs, many of them urging humanity and love, just as many with a cheeky bite (one asked: donald, have you tried therapy yet?) The gathering was party-like, as protests often are. A dozen members of Make the Road Action Fund, a New York-based political organizing group, with t-shirts announcing their affiliation, also brought their demonstration know-how (they were the ones who brought chant scripts, and they were the ones who brought a megaphone), and kept energies up.

“America is hating again. We’re going to go back to the past. Donald Trump’s ideas are from the 1800s,” said Make the Road Action Fund supporter Fernando Sosa, of Long Island. This wasn’t Sosa’s first protest; he’s taken to the streets to speak in support of immigrant rights, police accountability, workers’ rights. He saw standing up to Trump as another requirement to speak out. “We are a nation of immigrants and we are here to stay.”

Bernie Sanders supporters, who brought campaign fliers, were well-represented among the anti-Trump crowd; if they were at the vigil they kept quiet. There were also Hillary Clinton supporters in the crowd. But more important on everyone’s list was defeating Donald Trump in New York, and if necessary, in the general election.

Inside, Trump never acknowledged the protesters (who he often delights in attacking). Trump offered a condensed thirty minute-version of his stump speech, careening from topic to topic. The crowd was clearly familiar with it; they shouted back Trump’s preferred answer when he said. “The wall is going to be built. You know who’s paying for it. Who’s paying??”

Later, as if conducting a focus group from the stage, he asked the crowd: “What’s more important to you—the wall or the trade deals?” He said that upon his election as president, the people in the room would finally be able to be proud of their president, “but more importantly, you’re going to be so proud of your country again.”

Once, the father of three, said the memory of being in Patchogue when Lucero was killed, “was really, really bad.” “It could happen to me, it could happen.”