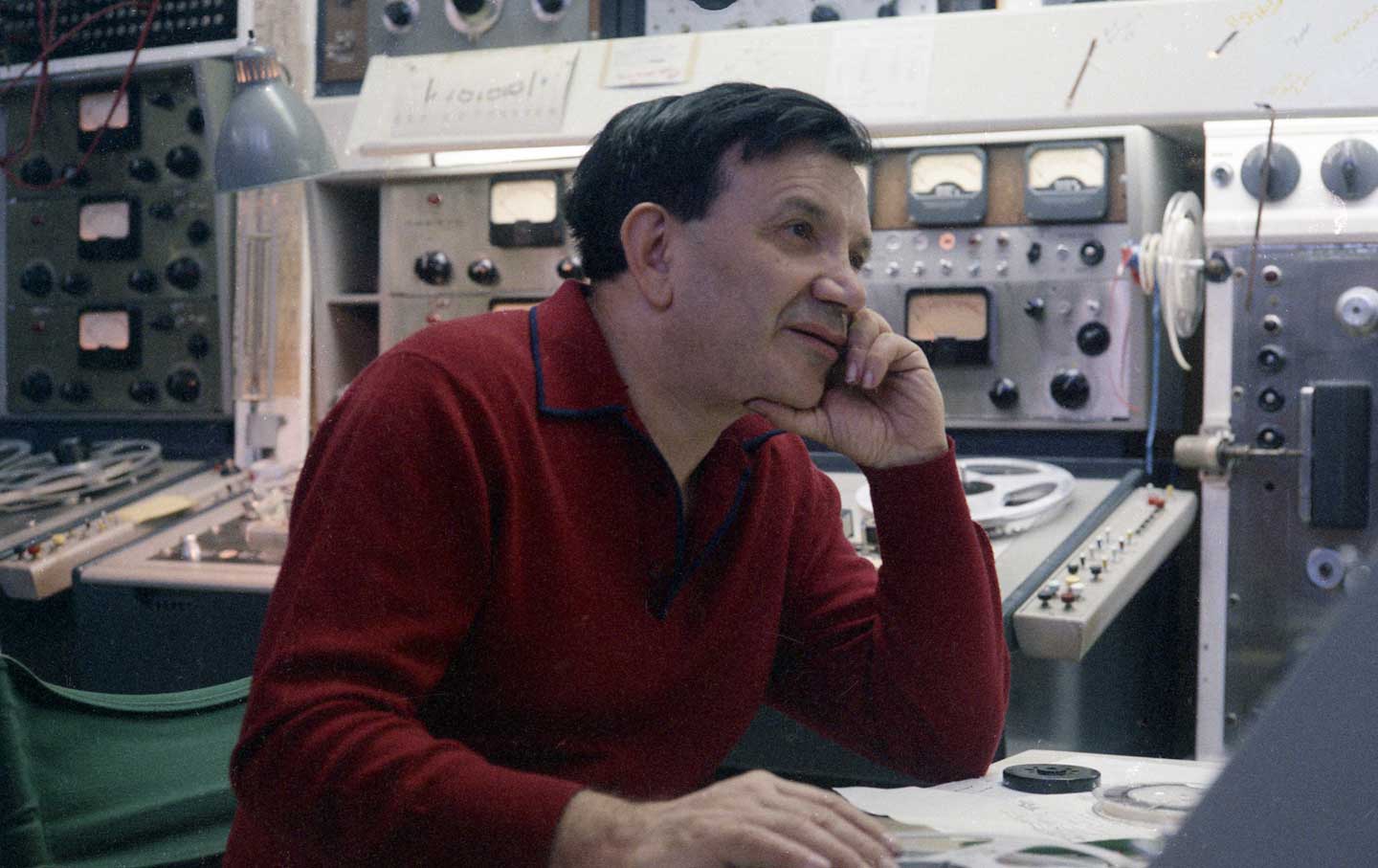 Raymond Scott, the late musical iconoclast once known mainly as a jazz-pop bandleader and composer, seems now to have been something like the Charles Ives of 21st-century music. Tinkering in a hand-built lab full of hot-wired audio processing and recording gear, Scott, who died in 1994, experimented for decades on ways to produce never-before-heard synthetic sounds with machines programmable to generate music in extra-human patterns and rhythms. What he was making during the ’60s anticipated contemporary electronica, though most of his work was largely unknown at the time. Two new releases—one of previously unissued test recordings by Scott, one of new songs by the contemporary producer Cornelius—bring to light the remarkable prescience of Scott’s sonic experimentation, as well as its shortcomings.

Scott, the one-time musical director of the primordial TV show Your Hit Parade, always had an adventurist side. As early as 1936, when Scott was 28, he was leading an oddball sextet (with a fittingly puzzling name, the Raymond Scott Quintette) to record a string of novelty tunes with tactically silly names such as “Girl at the Typewriter” and “Bumpy Weather Over Newark” that obscured the avant-gardism in their convoluted structures and irregular tonalities. An influence on Carl Stalling, the composer of scores for the Looney Tunes cartoons, Scott was at home in the realm of whimsical impossibilities, where the silly and the cerebral, the commercial and the unsellable, are all of a piece.

The latest release of Scott obscurities, packaged under the supervision of longtime advocate Irwin Chusid and his collaborators, is the second collection of Scott’s electronica, following Manhattan Research, Inc. (2000), a set named for the corporation Scott established in 1946 for his sonic experimentation. As with the Quintette, there was strategic misdirection in the company name, since Scott operated it, at first, out of the basement of his house in Long Island and later in a nearby industrial park. The new collection, which brings together 61 recordings, is titled for the latter site, Three Willow Park: Electronic Music from Inner Space, 1961-1971.

Most (but not all) of the tracks are short, from a minute or so to a few minutes long, and more than two dozen are under a minute in duration. They’re true experiments, tests of what Scott could do with his equipment or, more radically for the time, what the equipment, once wired up and let loose, could do on its own. Along with an early drum machine (dubbed, in the Scott tradition, Bandito the Bongo Artist), effects generators, sequencers, and other gear, Scott tested out an invention-in-progress called the Electronium, an analog algorithm generator combined with a synthesizer. Overall, the tracks come across like options on a menu of ringtones, a remarkable thing considering that they were created at a time when the latest innovation in telecommunications was the push-button phone.

At their best, in the case of longer selections such as “A Rhythm Ballet,” “Carribea,” and five skeletal near-songs generated by the Electronium, the pieces make for pleasurable, modestly stimulating background music, much like a great deal of contemporary electronica. And yet the joy Scott took in discovering ways of making sounds that no one had heard before permeates the tracks. The sense that Scott was on to something comes through.

Cornelius, the Japanese composer and producer (born Keigo Oyamada), made his reputation 20 years ago with his third solo album, Fantasma, on which he freely but masterfully employed a wealth of then-novel sounds that could have been sampled from the experiments on Three Willow Park. (As far as I know, Cornelius has never mentioned Raymond Scott in interviews, and he may well have never heard of him.) Since then, he has released only three albums: Point (2001), Sensuous (2006), and the new Mellow Waves (July 2017). Despite their not having worked together, the promise of Scott’s visionary noodling achieves a kind of fulfillment in Cornelius’s music.

Mellow Waves, as the title suggests, is a collection of gentle mood pieces such as “The Rain Song” and “The Spell of a Vanishing Loveliness.” They could work as background music, much like Scott’s releases. But there’s subtlety below the creamy surface of the songs on Mellow Waves. If all of them don’t require close scrutiny, most of them still reward it.

With a laptop, some music software, and a few add-ons, any producer now has the opportunity to create and process a wealth of sounds that Raymond Scott, with all the gear in his lab at 3 Willow Park, could have only imagined—and probably did imagine. Yet Cornelius, as he and his work have matured, has been using fewer effects with more discrimination. Over the past two decades, he has been working with growing attention to emotional expression, employing technology in ways that have taken him ever further from the tendency of electronica to substitute titillation for deep feeling. With Mellow Waves, he has a produced a highly controlled, restrained sound whose novelty is its elegiac beauty.