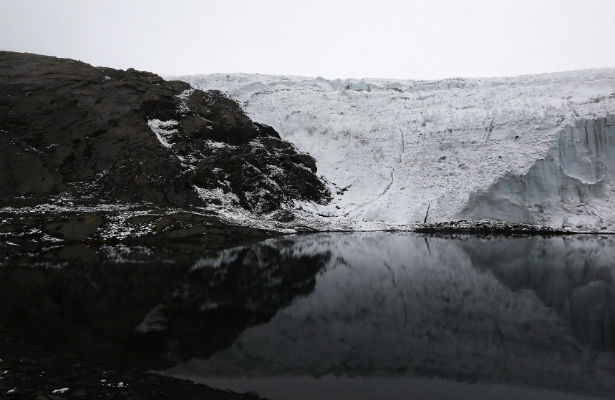 The first order of business for the new GOP majorities in both houses of Congress is to dismantle as much of President Obama’s agenda as possible—starting with climate change. This is not mere speculation: the first two items prospective Senate majority leader Mitch McConnell cited to reporters the day after the elections were authorization of the Keystone XL pipeline and rollback of the Environmental Protection Agency’s recently announced but not yet implemented rules on carbon dioxide emissions. Then, reacting to Obama’s November 11 announcement of a genuinely historic climate accord with China—for the first time, China agreed to an absolute limit on its emissions (by 2030), while the United States pledged to accelerate its own reductions through 2025—McConnell attacked the deal as an “unrealistic” job killer.

Such polluter-friendly priorities come as no surprise from a party swept into power on a wave of oil and coal industry campaign money, including Koch brothers cash—much of it “dark money” and thus untraceable. Now, the GOP’s Senate victory will hand the reins of the Environment and Public Works Committee to Capitol Hill’s leading climate denier, James Inhofe of Oklahoma, author of The Greatest Hoax: How the Global Warming Conspiracy Threatens Your Future. The absurdity might be laughable if the future of the planet weren’t at stake.

Nonetheless, there is a pale silver lining. The Republicans’ newly extended reach may still exceed their grasp, at least on climate issues. The most astute analysis of the new landscape on Capitol Hill, by Nick Juliano of Greenwire, rightly concentrates on the Senate. In the past four years, the GOP-controlled House has passed numerous bills to restrict federal action on climate change—in May, it voted to forbid the Defense Department to spend money on any climate-related initiatives—but such measures typically died in the Democratic Senate. The midterm elections gave Republicans at least seven and perhaps as many as nine new senators (pending a recount in Alaska and a runoff in Louisiana). Nevertheless, Juliano says, “Republicans do not appear to have flipped enough seats to undo most of President Obama’s environment and climate change agenda.” That’s partly because Democrats began with a sizable Senate majority, and partly because some ousted Democrats, such as Mark Pryor of Arkansas, already voted with Republicans on climate issues. “Republicans likely have between 55 and 59 votes to block action on climate change based on seats that flipped this year,” concludes Juliano.

Thus Republicans remain one to five votes short of the sixty needed to overcome a Democratic filibuster and an additional seven short of the sixty-seven needed to override a presidential veto. This means that Keystone is still Obama’s call. Given his years of equivocation on the issue, this may strike some as cold comfort; his most recent statement on the pipeline—“I’m going to let that process play out”—carefully kept all his options open. But Obama has no credible dodge on Keystone; it remains his decision to make.

Where the GOP Senate has greater leverage is in its power of the purse. If the Republicans attach to a must-pass budget bill a rider prohibiting the executive branch from spending funds to implement the EPA’s carbon regulations, say, or to send diplomats to the Paris climate summit in 2015, Democrats and the president will face a choice: filibuster or veto such a bill and stand accused of being willing to shut down the government, or cave and let Republicans have their way.

In short, the coming GOP assaults can be repelled if—admittedly, not a small “if ”—Democrats unite and fight back. But climate change, unlike other issues, comes with a time limit. Wait too long to get it right and you can’t get it right; global warming keeps accelerating, and a dangerously overheated planet becomes all but unavoidable. Two days before the US elections, the UN Intergovernmental Panel on Climate Change warned that “serious, pervasive and irreversible” impacts await humanity unless greenhouse gas emissions are slashed and carbon-based fuels phased out almost entirely by 2100.

Obama’s policies make a modest contribution to meeting this timetable, but they are far from sufficient, as his top climate adviser, John Podesta, has acknowledged. The tragedy of the 2014 elections is that debate in Washington over the next two years is likely to focus only on whether to keep or kill Obama’s existing climate policies. Those policies actually need to be expanded as rapidly as possible. The US-China climate deal is a gigantic political development, not enough scientifically yet but the necessary breakthrough to getting there, starting at Paris in 2015.

To defeat the Republican onslaught, the coming fights over climate policy must be made as public as possible. American voters generally don’t like it when politicians attack clean air, and the 2016 elections are already on the minds of every politician in Washington. “Twenty-four Republican [Senate candidates] will have to face the voters in 2016, many of them in states like Florida, Illinois and Iowa where there are big Democratic electorates and strong bipartisan support for clean energy,” says Michael Brune, executive director of the Sierra Club. “It’s going to be hard for senators in those states to take votes to cut EPA authority. And we’re going to make it hard.”