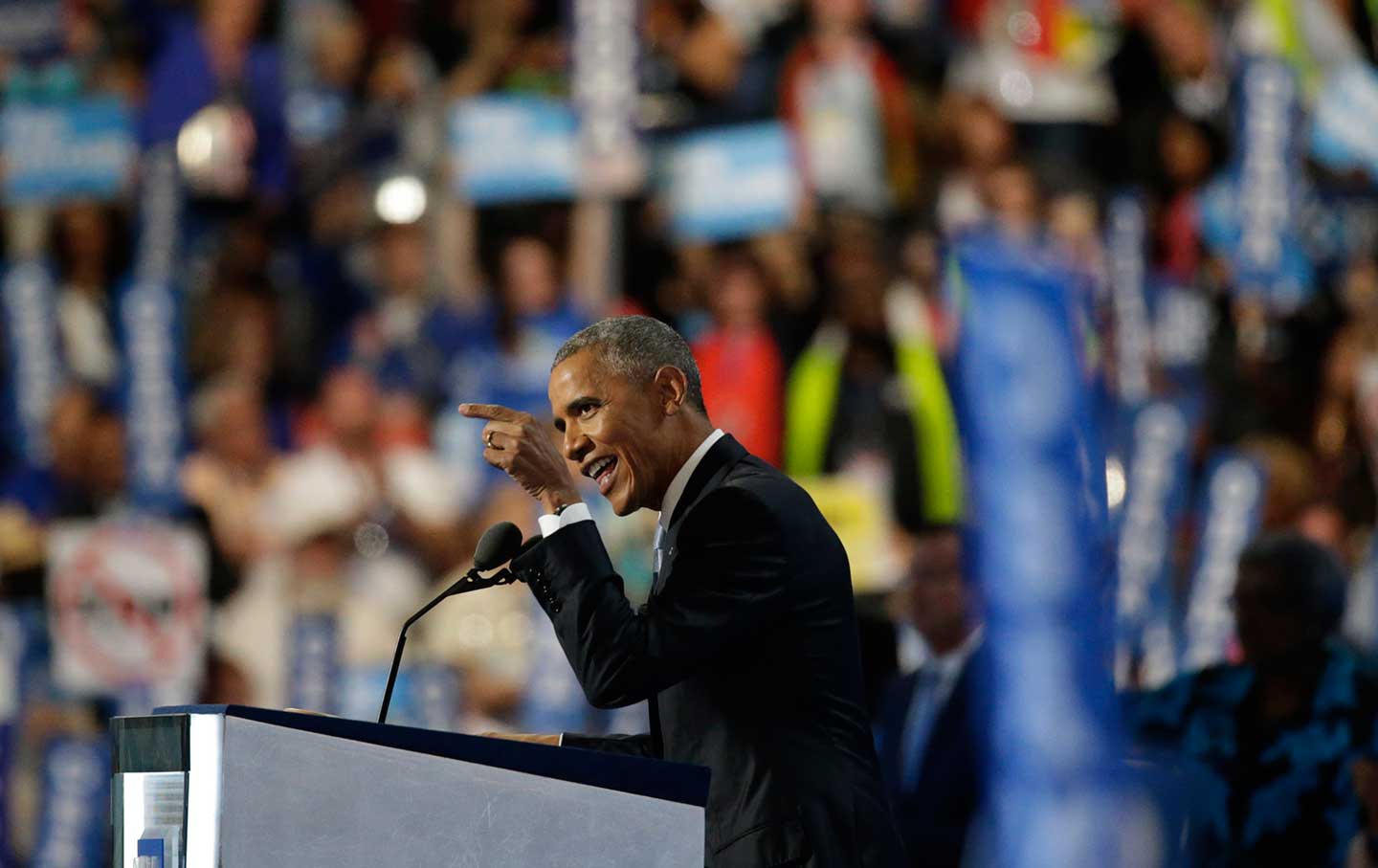 The crowd at the Democratic National Convention, which has not always cheered in unison this week, cheered robustly when the president declared:

Democracy works, but we gotta want it—not just during an election year, but all the days in between.

So if you agree that there’s too much inequality in our economy, and too much money in our politics, we all need to be as vocal and as organized and as persistent as Bernie Sanders’ supporters have been. We all need to get out and vote for Democrats up and down the ticket, and then hold them accountable until they get the job done.

The references to Sanders came from a president and a Democratic nominee for vice president who devoted substantial portions of their speeches to hailing Hillary Clinton, the party’s nominee for president. Obama and Kaine were not objecting to the fact that Clinton beat the senator from Vermont for the nomination, and that tomorrow night she will deliver her acceptance speech.

Rather, they were acknowledging that the passionately progressive campaign that Sanders ran this year secured more than 13 million votes, won 23 primary and caucus contests, and brought almost 1,900 delegates to the convention floor.

Obama and Kaine know that Sanders accomplished something this year.

They are certainly aware that recognizing this accomplishment could help in the work of pulling together a party that is still struggling to achieve unity.

Kaine—the centrist former governor and senator from Virginia who was certainly not the first choice of most Sanders backers for the vice-presidential nomination—mentioned Sanders early in his speech. Noting that he serves on the Senate Budget Committee with Sanders, the Virginian described the Vermonter as an ally in the critical work of finding resources for education and health-care projects. When that line drew a loud cheer, Kaine ad-libbed a line that was not in his prepared text: “We all should feel the Bern and we all should not want to get burned by the other guy!”

That was one of the night’s many jabs at Republican presidential nominee Donald Trump. But it was also a grasp at party unity.

What Obama and Kaine did Wednesday night was rare. Most speakers at this convention, even speakers who have for many years served in the House of Representatives and the Senate with Sanders, have failed to mention his name in their speeches to the convention. That is, of course, their rhetorical right. But it is not necessarily wise politics when so many of the delegates and alternates and guests at this convention arrived as Sanders backers.

Obama is a very wise politician, as is Kaine. Both men understand that there are a lot of people in this convention hall who would like to cheer a few more times for Bernie Sanders.

Kaine put Bernie Sanders—the outsider, the insurgent, the champion of a political revolution—in the company of Clinton, the Bidens, and the Obamas.

That is a small measure of the influence Bernie Sanders has had on American politics.

A few minutes after Kaine, President Obama provided a greater measure of that influence, when he responded to cheers for his own reference to Sanders by smiling broadly and declaring: “That’s right: Feel the Bern!”