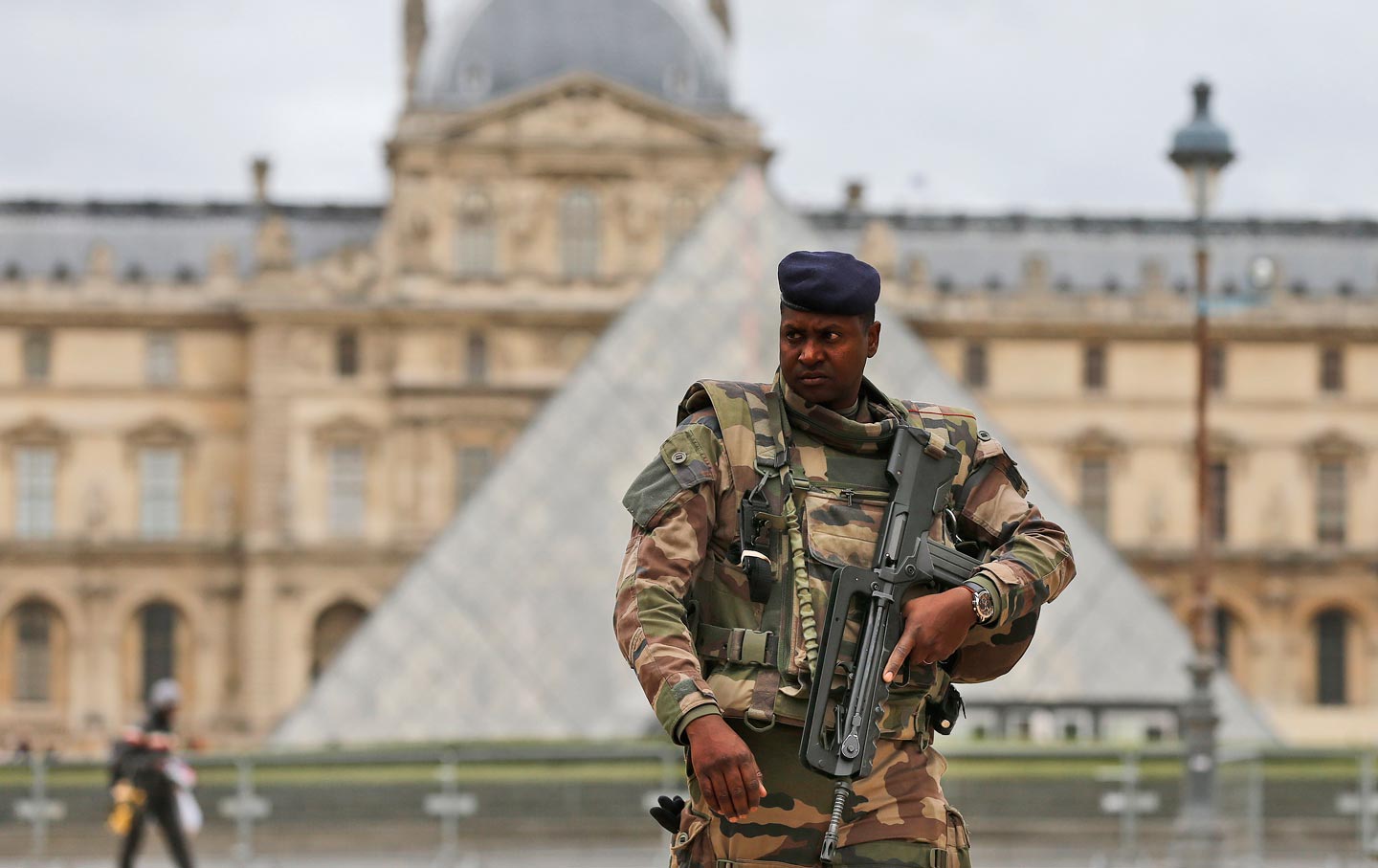 A soldier patrols in the courtyard of the Louvre Museum in Paris, Tuesday, November 17, 2015. (AP Photo / Frank Augstein)

It could have been even worse, though that is hard to contemplate. The suicide bombers arrived at the Stade de France 20 minutes after the start of the game. Probably they had been planning to blow themselves up in the midst of the crowds while they were queuing up to enter the stadium. But they came by car, which was very stupid, as everyone knows that, in that part of Paris when there is a game, the roads are blocked and there is nowhere to park. When one of the bombers was refused entry by a security guard, they all blew themselves up. Instead of hundreds of people, they killed one person other than themselves.

Compared with 9/11, the Paris attacks were amateurish. The terrorists were uneducated, underprivileged men, mainly from France and Belgium, who had gone to Syria to train, unlike the middle-class graduates who piloted the planes attacking New York and Washington. Their weapons were Kalashnikovs and suicide belts—the vernacular technologies of the marginalized. On 9/11 they targeted the centers of money and power. In Paris, the terrorists targeted fun—sports, music, eating and drinking. As comedian John Oliver put it: “If you are going to have a war of culture against France, good fucking luck.”

If the attacks were amateurish, the response has been anachronistic and short-termist. It is a “state of war,” declared French President François Hollande, perhaps with an eye to the imminent regional elections. On November 14, the day after the attacks, French planes bombed Raqqa, the headquarters of ISIS; Hollande also called for an international coalition to join the fight. His militant words have been echoed across the French political spectrum and in Britain as well. At a meeting of the parliamentary Labour Party, MPs attacked new left-wing leader Jeremy Corbyn for opposing the use of lethal force.

Have we learned nothing from the last 14 years? It was President Bush who declared a “war on terror” after 9/11, a statement that led us to the Patriot Act, the invasions of Afghanistan and Iraq, and Guantánamo. The war response does not work; it makes things worse. ISIS, which did not exist before 9/11, is the culmination of all these developments, especially the invasion of Iraq. Many of us argued at the time that the 9/11 attacks should have been described as a “crime against humanity” and that the response should have focused on intelligence and policing as well as addressing some of the social, cultural, and economic problems that create a context for extremism.

It is very doubtful, however, that Hollande can put together an international coalition to fight ISIS. As Olivier Roy, the distinguished scholar of Islamism, argues in The New York Times, all the other actors in the Middle East have other interests: Assad wants to defeat the rebels; Saudi Arabia is preoccupied with Iran; the Kurds want to establish control of Kurdish territory; the Turks are more interested in fighting the Kurds. Western countries have no appetite for a ground war after what happened in Iraq and Afghanistan. The only possible way that a military coalition is conceivable is if the West gives up its demand for the removal of Assad and allows the Syrian regime and Russia to join the coalition. But what would that achieve?

ISIS is a symptom of the absence of legitimate government in Iraq and Syria. After all, Al Qaeda in Iraq was defeated in 2007 when Gen. David Petraeus allied with Sunni tribesmen. But the failure to follow through on this victory politically and the divisive sectarian character of the Iraqi government is what made possible the emergence of ISIS through alliances with those same Sunni tribes. In Syria, the Assad regime, with its barrel bombs, not to mention imprisonment and torture, kills many more people than ISIS, which moves into areas where governance is lacking and resistance is virtually nonexistent. Even if we were to succeed in defeating ISIS militarily, something similar would emerge unless the underlying problem is addressed.

But ISIS is, above all, a symptom of our own failure to behave according to our values. When we respond to terror attacks with air strikes and drone killings, we seem oblivious to the terror for which we ourselves are responsible. When we abandon drowning refugees or tolerate Assad’s killings, we are creating space for ISIS. Of course we need to talk to Assad and Putin, and also Iran, about how to end the war. But allying with them in a new “war on terror” would confirm our own moral poverty.

So the only solution, as the well-known public intellectual Edgar Morin pointed out in Le Monde, is peace in the Middle East and peace in the banlieues of Europe. This would require pan-European policing and intelligence, dealing with unemployment and other social problems, and, above all, finding a solution to the Syrian conflict and helping to construct legitimate governments in Iraq and Syria. This is no easy task and it involves patient, long-term, bottom-up ways of addressing the situation on the ground in both the Middle East and Europe.

In the current European political climate, with the refugee crisis and the rise of populist parties, difficult answers do not win elections. The likely prognosis is more amateurish attacks and more anachronistic military responses, which will reinforce each other in a long, protracted story of violence. Perhaps what the tragedy in Paris tells us is the most depressing thing of all—the absence of public reason, the failure to think seriously and honestly about our current plight.