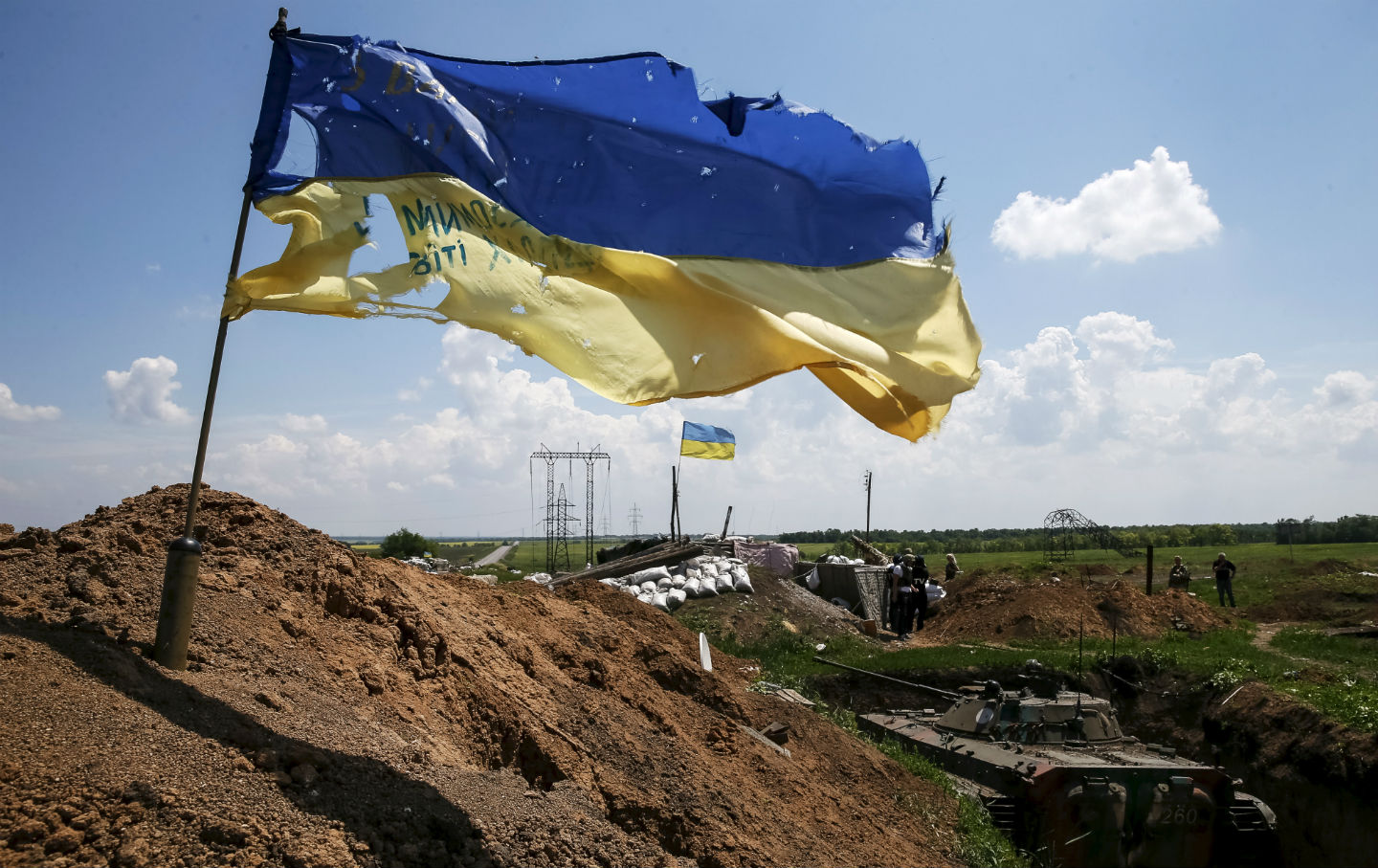 A tattered Ukrainian national flag flutters in the wind near the town of Maryinka in eastern Ukraine, June 5, 2015. (Reuters / Gleb Garanich)

Yesterday, with the announcement that the Ukrainian government had reached an agreement on restructuring its private debt with a consortium of bond holders led by Franklin Templeton, there was much rejoicing. In Kiev, the American-born former State Department official turned Ukrainian finance minister, Natalie Jaresko, was presented with a painted artillery-shell casing as a token of the government’s thanks for her work on the deal.

In Washington, Kiev’s legion of cheerleaders, led as usual by the virulently Russophobic think tank the Atlantic Council, declared that “things are looking up for Ukraine.” No less an authority than Anders Aslund, who served as an economic adviser to Ukrainian President Leonid Kuchma from 1994–97, crowed that the “resolution of Ukraine’s debt saga looks like a great success for all parties involved.”

While most analysts agree that the deal buys time for the authorities in Kiev, the terms of the deal seems to favor the lenders over the Ukrainian government. Yesterday Goldman Sachs noted that the likelihood that bondholders would vote against the bond restructuring was small “given the attractiveness of the offer relative to market expectations.” In return for a four-year extension on payments of the remaining debt, Ukraine agreed to a higher coupon (interest rate) of 7.75 percent, up from 7.25 percent. Further, after the four-year period expires in 2019, Ukraine will be obliged to spend 40 percent of any GDP growth over 4 percent on debt repayment.

Jaresko’s original bargaining position, that bondholders would have to take a 40 percent haircut, was whittled down to 20 percent. Forbes magazine economics and demography blogger Mark Adomanis told me the deal “is clearly better than nothing, but given the increasingly poor performance of the economy, more drastic action was called for.” “The deal,” he continued, “seems less like a solution and more like a postponement.”

Immediately after the deal was announced, reports began to appear to the effect that Russia, unlike Ukraine’s private sector lenders, will not accept a 20 percent write-down on the $3 billion Eurobond due in December. This deserves some examination, because this part of the story has potentially worrying ramifications over the long term.

It should be noted that it is, of course, entirely conceivable that Russia would have voluntarily acquiesced to the terms of the debt restructuring if its own economy (which by some estimates is expected to shrink by 3.4 percent in 2015 and as much as 9 percent over the medium term) wasn’t being targeted by Western sanctions.

Russia’s enthusiasm to lend Kiev a helping hand was no doubt dampened by Ukrainian President Poroshenko’s promise—in direct violation of the IMF’s articles of agreement—to use part of the IMF’s $17.5 billion loan to carry out Ukraine’s “anti terrorist operation” against its own citizens. Still worse, the IMF loan and the debt restructuring’s attendant benefits (such as they are) will do little to address either the oligarchical nature of the economy or widespread government corruption.

Nevertheless, Russia’s position is that it is not legally bound to accept the terms of the package, since its debt is classified as “official,” or government-to-government debt. Yet Jaresko and the Ukrainian government insist that Russia’s $3 billion loan is a commercial debt and insist on its restructuring.

University of Missouri economist and author of a forthcoming exposé of the global financial crisis Michael Hudson calls Kiev’s position “incredible.” Hudson told me yesterday that in refusing to rebut Kiev’s position on its Russian debt, the IMF “seems to have broken new ground in not insisting that Russia’s sovereign wealth fund investment is a government investment.”

If the IMF allows Ukraine to abrogate its commitment on its Russian bond payment, the consequences could be drastic. As Hudson notes, it will then become clear that “the IMF no longer applies international law to Russia” giving Russia and the BRICS (the other BRICS being Brazil, India, China, South Africa) “little reason to remain in the IMF and World Bank.”

Hudson warns that should Ukraine, with the IMF’s acquiescence, purposefully default on its bond payment to Russia in December, what “will be lost is access to international law by whatever government the US opposes.”

So while yesterday’s deal was perhaps a (very) modest victory for the Ukrainian economy, the IMF’s blurring of the rules governing private and official (or government-to-government) debt could herald worse things to come.