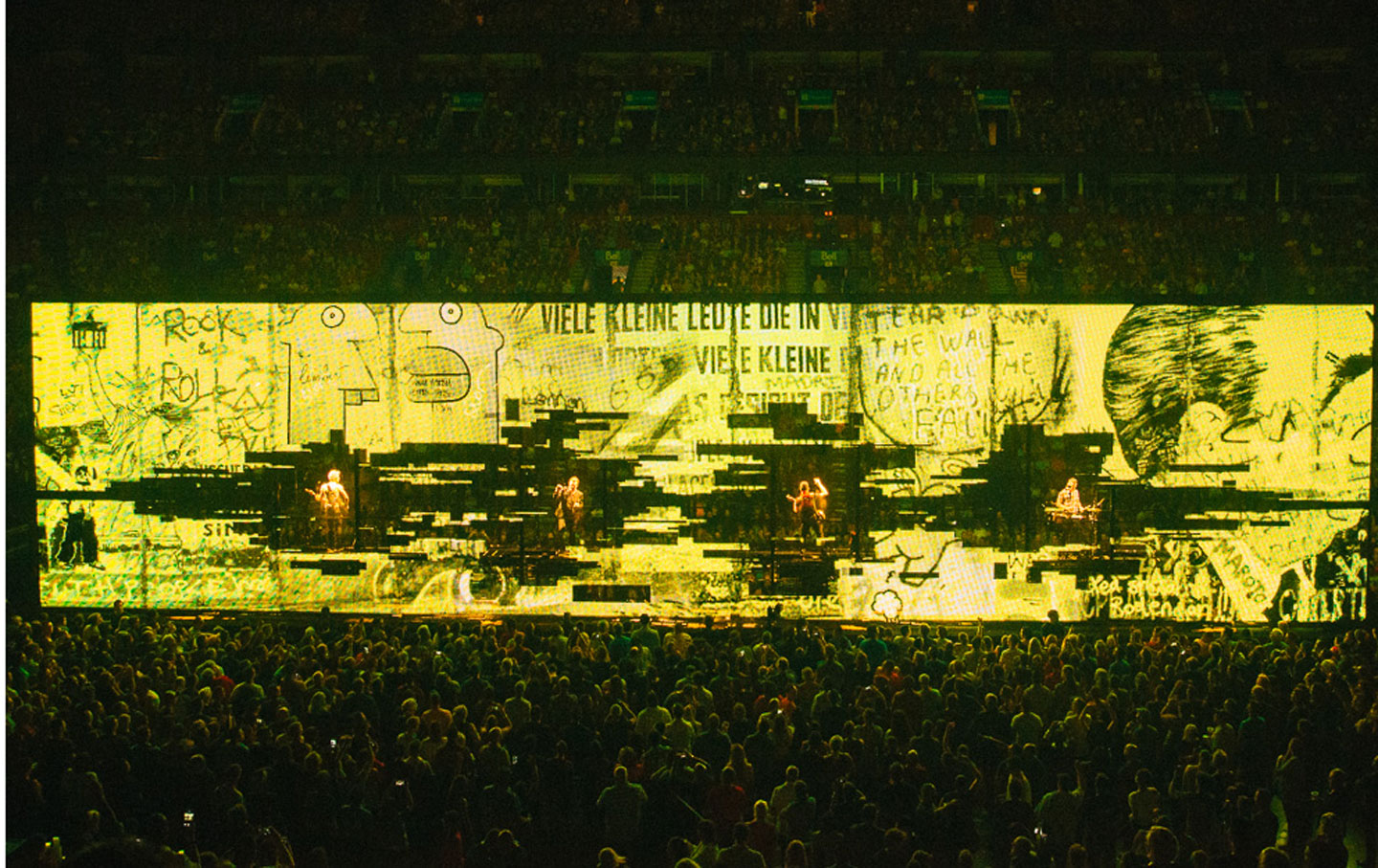 U2 performs at Madison Square Garden. (U2 © Samy Mosher)

In stagecraft, as in statecraft, there’s both satisfaction and capitulation in the art of compromise. But there’s no triumph, as Bono reminded the audience in Madison Square Garden for the final North American show of U2’s latest tour, “iNNOCENCE + eXPERIENCE” (with inverted capitalization). In a mini-lecture on the current stability in Ireland, Bono said, “Let’s honor the people who were brave enough to compromise, because that’s what it takes to get results. When you compromise, nobody loses, and nobody wins.”

As boosterish platitudes go, that’s a good one to remember. Lest the audience forget, Bono, later in the show, added a few lines to the lyrics of “Sunday, Bloody Sunday,” the U2 song about the 1972 clash between Irish protesters and British soldiers that left 14 unarmed civilians dead. In the original recording, a hit for U2 in 1983, Bono sang of “the real battle just begun, to claim the victory Jesus won.” In concerts now, he adds at that point, “Give it up! Compromise is not a dirty word—compromise!”

In theatrical terms, the “iNNOCENCE + eXPERIENCE” tour is an example of compromise considerably less historic than peace in Ireland, but impressive in its own way. U2 has for decades put a Herculean effort into making its stage shows spectacular and innovative and, above all, gargantuan. The “360° Tour,” which lasted two full years—from June 2009 to July 2011—was staged in the largest edifice ever erected for a concert, a claw-legged sci-fi-monster structure that rose some 160 feet over the seats of the stadium. It was so large that the band had to pay millions of dollars to expand the Montreal Hippodrome just to fit the set.

For “iNNOCENCE + eXPERIENCE,” U2 scaled back, relatively speaking, to mere arenas such as the Pepsi Center in Denver, the United Center in Chicago, and Madison Square Garden in New York City. The set for this tour, devised by longtime U2 stage designer Willie Williams, presented the band on two simple platforms, one at each end of the arena floor, with an elaborate combination walkway and two-sided video-projection system that allows the musicians to be part of the videos as they perform. The sound system is suspended from the ceiling, unseen. At the show I attended, the design somehow made the cavernous Madison Square Garden space feel almost intimate.

The great compromise came in the band’s accommodation of social media. Before U2 took the stage on the west side of the Garden, members of the audience noticed the arrival of Bill and Hillary Clinton in one of the boxes, and the sight of handheld devices—tens of thousands of them, all lit and held in the air—soon dominated the event. For more than two hours, the devices jiggled and glowed, turning to catch the movements of the band like… I want to say “like poppies in a field,” but the image is too sweet, because there was something profoundly unsettling in the way that thousands of people, myself included, were dealing with the presence of a great four-piece band playing in their midst. They—no, we—used it as an opportunity to do the same thing we do with everything else in life today: shoot and share and text and, in general, disconnect from our surroundings under the subterfuge of connectedness.

‘THE NATION’ IS READER-FUNDED. YOUR SUPPORT IS VITAL TO OUR WORK.

Early in the second half of the show, Bono led a set-piece in which he brought a member of the audience onto the stage and gave her a camera to shoot the band as it played. The Edge clowned around for the camera, in the manner of a good dad at a preschooler’s birthday party, and the images appeared in real time on the giant two-sided screen over the walkway in the center of the arena. Live tweets from people in the audience scrolled on the screens. For a few minutes, U2 had managed to use social media as a way to bring the band and its fans closer. Then the show turned back into a show, and everyone reverted to shooting it and texting.

“Take all the pictures you want,” Bono said. “But you don’t have to take pictures all the time. Try to be in the moment, too.” It was a brave attempt to suggest a compromise, though it didn’t seem to have much effect, and the issue he was confronting will surely only intensify. You don’t have to play with inverted capitalization to appreciate that the era of handheld devices and social media is bringing its own set of troubles.