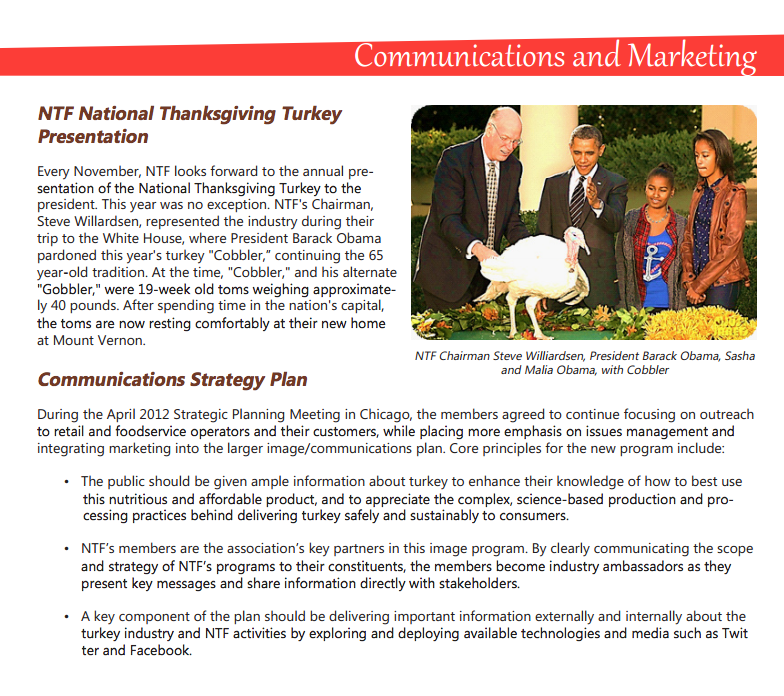 When Congress moved to regulate most child labor in 1938, an exception was carved for the agriculture industry. Children as young as 12 are allowed to engage in dangerous farmwork, which has lead to dozens of deaths and serious injuries for America’s rural youth. Though the Obama administration’s Labor Department moved better regulate child farm labor, industry pressure forced officials to back down. Mariya Strauss published a deeply reported investigation into the matter for The Nation earlier this month.

Like most economic issues, the child farm labor regulation came down to a contest of money and influence in Washington. Children and their advocates have little political resources, while the big agriculture industry hires lobbyists, bundles donations to lawmakers and shapes media coverage through slick public relation campaigns.

A little-known fact about the annual presidential pardon of a Thanksgiving turkey is that the bird is provided by the industry trade association for turkey farms, including Cargill, Perdue Farms, Dakota Provisions and Willmar Poultry Company. The industry group, the National Turkey Federation, presented Obama with two white turkeys, Popcorn and Caramel. While the event certainly provided light-hearted publicity for the turkey industry, it’s worth taking a look at the National Turkey Federation’s agenda.

Lobbying reports show the group has contacted lawmakers over immigration legislation and rules concerning animal drug use. Perhaps more surprising, and counter to the National Turkey Federation’s family-friendly public image, is the work the group has done to orchestrate opposition to the Obama administration’s child farm labor regulations. The annual report from the group celebrates its role in blocking the rule (emphasis added):

Department of Labor (DOL) Withdraws Proposed Rule on Child Agriculture Workers: The DOL withdrew its proposed rule on Child Labor Regulations in reponse to thousands of comments filed by NTF, other agriculture groups, and farm families across the country. The proposed rule included provisions that defined “parental exeption,” which would have dramatically affected rural communties and family-owned farms.”

Notably, the turkey lobby helped kill the rule by fasely claiming that the labor restrictions would prevent children from working on their own family farms. The Department of Labor rules contained a family exemption.

The National Turkey Federation certainly has the money to make things happen. The group spends over $2.1 million a year, in addition to an affiliated political action committee that doles out over $200,000 to congressional candidates. The NRF also has three registered lobbyists.

Katrina vanden Heuvel writes about the pardoning of the Scottsboro boys. Eighty years too late.