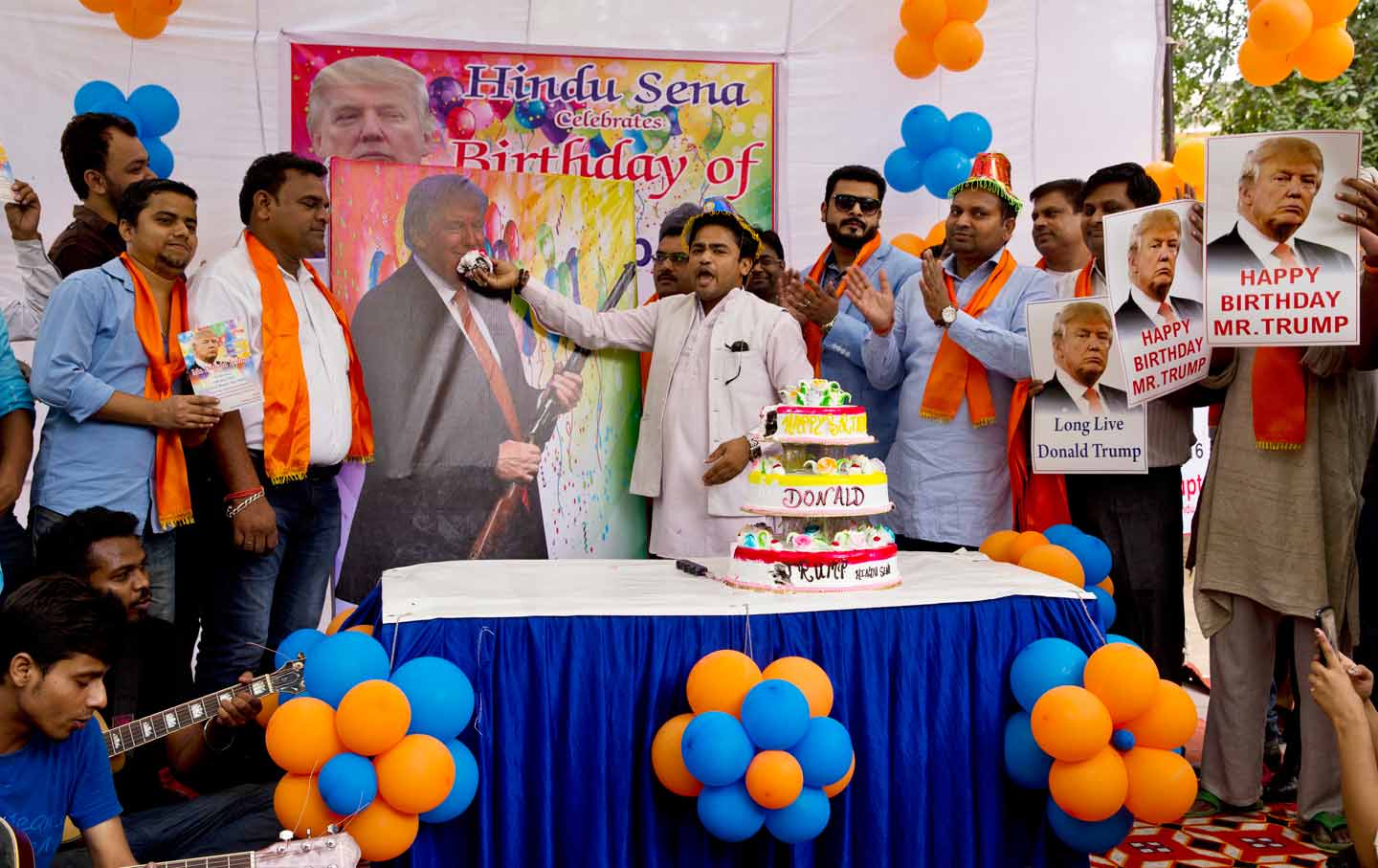 Donald Trump’s 70th birthday was June 14. One of its stranger celebrations took place in New Delhi, India, where members of the far-right Hindu Sena party made offerings of cake to a life-sized poster of the billionaire, praising him as the anti-Islamic messiah. “Trump has said Muslims should be banned from entering America. Everyone should support that,” said their organization’s president, Vishnu Gupta. “Trump is about to become the king of the world.”

Most media response rightly focused on Hindu Sena’s application of Trump’s xenophobic rhetoric to India’s boundary disputes with largely-Muslim Pakistan. But I was intrigued by how much easier it is to imagine Trump as king rather than as “presidential.” Trump certainly surrounds himself with more filigreed trappings than Louis the XIV. And with followers lauding his purity solely because he’s rich, he has magically succeeded in branding himself as America’s official golden calf. Perhaps it’s not a surprising leap that he would somehow be able to pass as Hindu Sena’s sacred cow as well. But I think that Donald Trump’s peculiar combination of crude yet imperial appeal is rooted in his personal appropriation of powers that legally belong to the state. He speaks not of government of or by the people, but only of “my” people.

Take just one well-worn example: “The people, my people, are so smart…they say I have the most loyal people, did you ever see that? Where I could stand in the middle of Fifth Avenue and shoot somebody and I wouldn’t lose any voters, OK? It’s like incredible…” Delivered as a brief, apparently careless throwaway, this soliloquy was nevertheless a masterpiece of well-practiced theatrical force, a “shot” taken gesturally as well as verbally. It’s worth having a close look at the video. If you pause it at just the moment when he says the word “shoot,” you’ll see that for a second or two, his entire body language changes—drawing himself up to full height and looking directly into the camera with sudden, bracing dead-seriousness. (Indeed, he adopts the exact posture of Uncle Sam in James Montgomery Flagg’s 1917 US Army recruitment poster. It almost impossible to see as accidental—right down to the color scheme—impossible to look at without hallucinating the familiar caption “I want you”….)

Trump then cocks his thumb, points his forefinger, and air-fires.

The next instant he’s back to the dance, the boasting jabs and jutting jaw, shoulders slanted, eyes off to the side, head lolling to all four winds. A roar of amusement rolls through the audience like a thunderstorm.

But in that one freeze-framed flash of his taking aim, his cocked body—that moment unleavened by jocular performativity—there is the tyrant’s invitation to join the army of “my people,” or else. His direct eye contact with the camera makes clear that he talking to you. In that quiver-pulsed moment of dark equivocation, you are invited down one of two paths: either that of the dumb sucker who goes limp and paralytic, the easy mark, a deer in the headlights of an unforgiving fate; or else leap aside, to his side, the good side, riding Trump’s triumphalist surf. The candidate’s rhetoric invites us into a world of magical realism, where a self-anointed good guy like Donald Trump can ride back in time to perform miracles: He would’ve cut short the carnage in Orlando, prevented 9/11, San Bernardino, and countless trade deals. He abides in a warrior world of redemptive vigilantism, where frightened psyches thrum to the drama of the OK Corral, now positioned squarely in the middle of Fifth Avenue. And Trump will be the savior of his people.

In L’Eloge Historique du Roi Louis XIV, the great poet and tragedian Jean Racine wrote of the king’s power: “There is a continuous series of miraculous deeds that he himself initiates, that he completes, deeds as clear, as intelligible when they are carried out as they are impenetrable before they are carried out.”

In an ordered society, the state consigns to itself a monopoly of power over bodies and, in a well-ordered society, is held accountable for judicious exercise of that power through regulatory constraints like due process, habeas corpus, and civil-rights laws. In traditional models of European monarchy, by contrast, the king was anointed, in a way that combined both absolute physical as well as spiritual—or messianic—power. This is the most important distinction between power accorded to systems of governance such as ours and the rule of kings. The restrained ideal of civil society is the direct, unpanicked polar opposite of “you’re fired” efficiency or “off with your head” fiat.

Nicholas Mirzoeff, in his very lucid media manual, How to See the World, writes that the corruptible humanity of royal individuals was disguised, shielded, enrobed in “the concept known as the body of the king, which we can call majesty. Majesty does not sleep, get ill, or become old. It is visualized, not seen.” This implied immortality of the embodied state is of course why the accession of monarchs was—still is—hailed with, “The king is dead, long live the king!”

“Long live Donald Trump,” shouted members of Hindu Sena, whose brand of fundamentalist nationalism has been linked for years to lethal riots against Muslims.

Donald Trump invokes “people” with every breath. But that invocation never encompasses the complex humanity of the people he marks as “his” (as in: “Oh, look at my African American over there…”). There is little acknowledgment that it is citizens themselves who hold power to govern. In his reductions of democracy to lone-wolf appropriation, his campaign has been one long pantomime of a corporate takeover: l’état, c’est Trump. Vive le moi. That “efficiency-of-me” bodes poorly for polity, for fairness, for justice, for us.