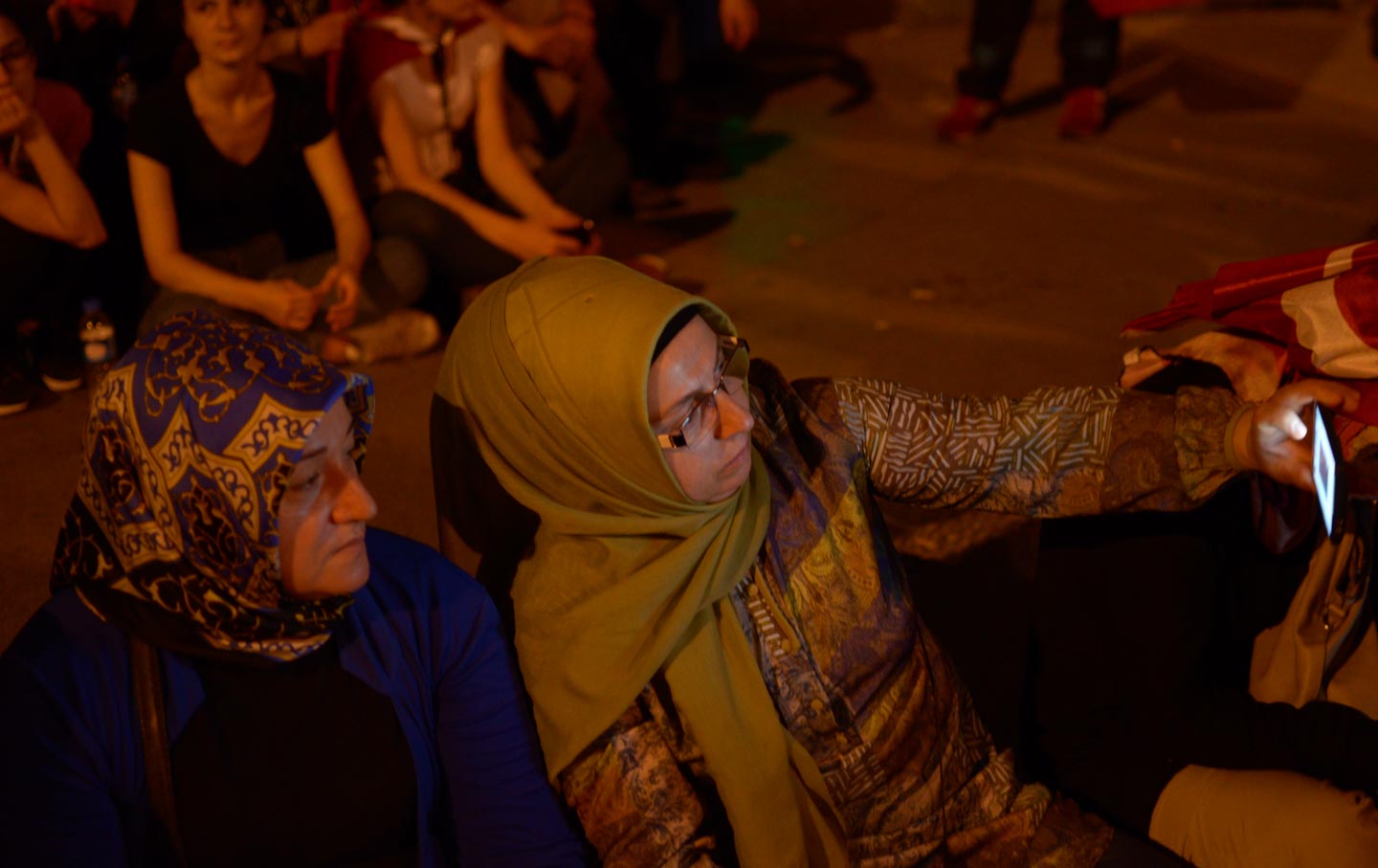 Last night, for the second night in a row, I stood in Istanbul’s Taksim Square, watching several thousand revelers, mostly religious conservatives, celebrate the failed coup attempt against the country’s elected government. Among the roiling red sea of Turkish national flags, among the chants “God is great” and the popular song praising, on loop, “Recep Tayyip Erdoğan,” the mood of the crowd was elated, even raucous—the very real fears of political defeat and carnage of a few hours ago were now transformed, almost miraculously, into a carnival of absolute victory. The surprise mutiny on the ship of state had been swiftly and ruthlessly suppressed, and the rebels were now lying tied up in the dark, dank hold, awaiting their sentences. The favorite captain was saved. There won’t be any change in the ship’s course.

The real coup has been Erdoğan’s, as he appropriated not only his opponents’ symbols but their technologies too.

Seen from afar—very far—the jubilant atmosphere at Taksim reminded me of another time, not that long ago, when large and diverse swaths of Istanbul’s civic community had come together at the same spot to protest the government’s plans to demolish the adjacent Gezi Park, one of the city’s last green spaces, and erect in its place a replica of Ottoman-era military barracks doubling as a shopping mall. Back then, in the summer of 2013, what had initially begun as a small environmental sit-in had gradually morphed into a full-scale insurrection, all across Turkey, against Erdoğan increasingly authoritarian rule. For many at Gezi, the issue was not simply about a couple of trees but about the entire political forest of the country: the widespread corruption, the clampdown on press freedom, the creeping Islamization of Turkish society.

I covered extensively the Taksim Gezi Park protests and will always remember them as a most beautiful time of hope and camaraderie. Men and women, Turks and Kurds, white and blue collar, gay and straight: Citizens of all walks of life and backgrounds came together for a time, huddled in tents or on bare ground, to defend a certain image of public life, based on pluralism and secular ideals of justice and liberty. If there was some amount of naïveté and romanticism among the protesters, it did nobody harm.

During the few weeks when the park was occupied, the atmosphere crackled with energy and inspiration: there were dances and rock concerts, a food distribution point, a makeshift library, and a medical center. Erdoğan dismissively called the participants looters, çapulcu, and the latter cheerfully looted the label, stamping it on their T-shirts and hats and Facebook profiles. By the time Erdoğan sent in the riot police to break up the encampment with tear gas and water cannons, it seemed already too late: Taksim Square, and Gezi Park in particular, had become a potent, internationally renowned site of civil resistance, the last stand of Turkish cosmopolitanism. It was perhaps the reason why the park survived even after the protests had been quashed, as the government was wary of provoking further unrest.

Everything has changed now. Far from putting a dent in his rule, the reckless and irresponsible coup attempt against the Turkish president has further consolidated his grab on power, giving him carte blanche to move against his enemies, real or imagined, with no remorse or restraint. Erdoğan’s supporters, too, feel that now is the time to occupy the urban territories that were once, at least symbolically, their opponents’. Taksim Square and its famous Monument of the Republic at the center, a place generally associated (aside from Gezi) with leftist, Kemalist, secular movements, has now become the gathering point of Turkey’s religious right. With the opposition completely paralyzed and any official critical voice potentially considered treasonous in the current circumstances, there is nothing to stop the supporters of AKP, Erdoğan’s ruling party, from claiming any place in the city they fancy. To destroy your enemies, you first destroy their symbols.

If Gezi protestors outsmarted Erdoğan with social networks, Erdoğan’s supporters have now caught up with a vengeance.

Watching the recent celebrations at Taksim in support of Erdoğan, I’ve been struck by how bleak they are, despite all the apparent pomp and circumstance, despite all the deafening music and vigorous flag waving. Whereas Gezi promoted diversity and gender equality, art and creativity, the current celebrations seem falsely theatrical, steeped in the religious dogma of garb and behavior. It is both comical and slightly sinister when young men who have climbed the Monument of the Republic, and are trying to keep their balance by holding on to the figure of Atatürk and his comrades, shout, “God is great” at the top of their voices. Turkish secularism seems to be retreating faster than ever, and there may be no turning back.

But it is not just the failed coup that has changed the situation in Turkey so dramatically. What I found most fascinating at the recent Taksim celebrations was that almost every single person held a cell phone: chatting, messaging, Facebooking, tweeting, taking videos, photos and selfies… many selfies. If the Gezi protestors had outsmarted Erdoğan by using social networks, Erdoğan’s supporters have now caught up, with a vengeance. Erdoğan, himself, managed to break the media blackout during the coup by appearing on FaceTime. Ironic or not, the Internet saved Erdoğan’s life.

There has been a coup in Turkey, but it has not been against Erdoğan. Rather, the real coup has been Erdoğan’s, as he has learned to appropriate not only his opponents’ symbols, but their technologies too.