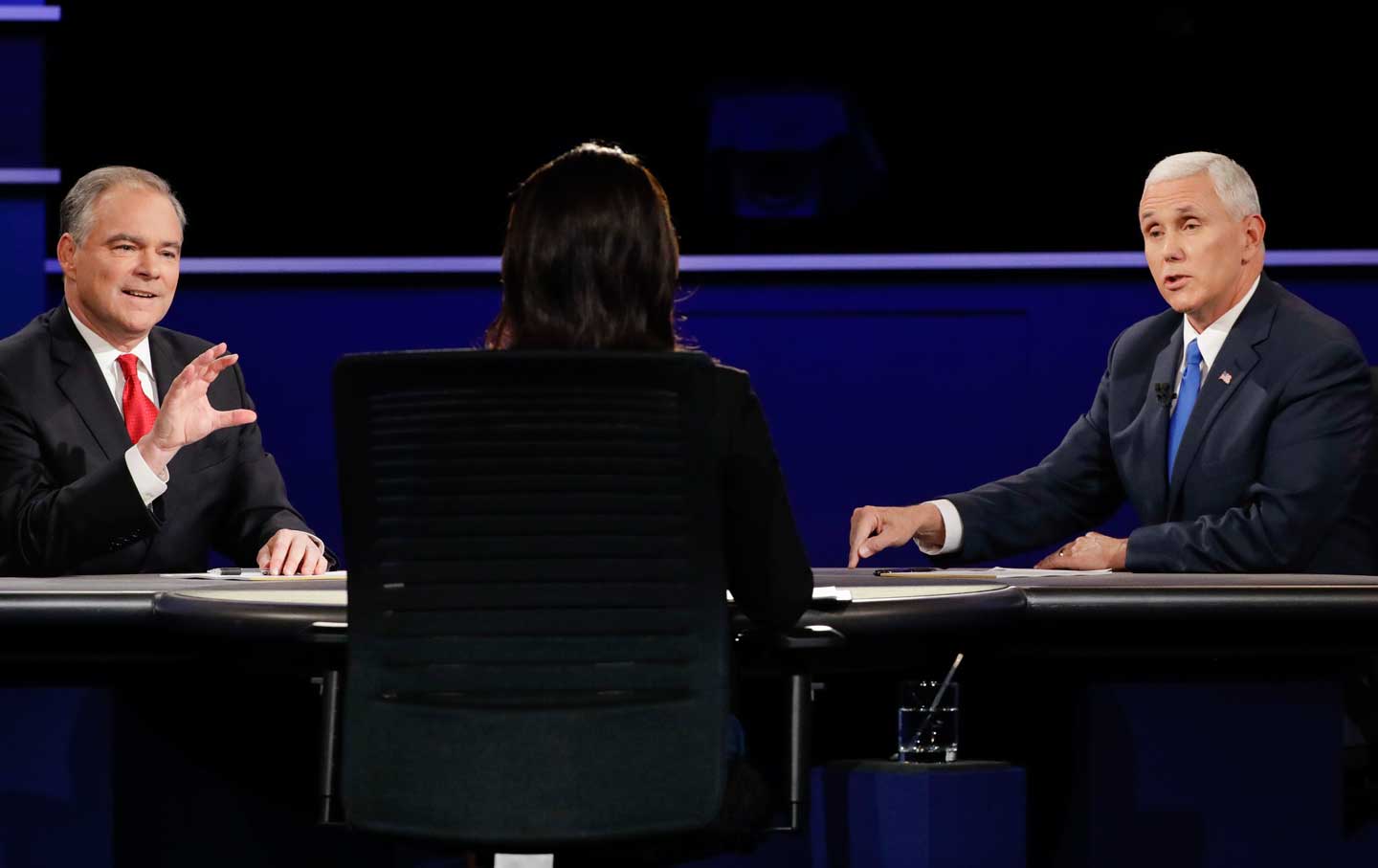 GOP vice-presidential nominee Mike Pence checked in on aisle 4 at Longwood University Tuesday night to clean up Donald Trump’s epic mess of a candidacy. But Democrat Tim Kaine, Pence’s opponent, made Pence grapple with his own mess too. Advance media coverage treated Pence like the respected professional who was going to have to answer for Trump’s many mistakes, ignoring the fact that, to crucial female voters anyway, Pence has a lot of mistakes of his own to explain.

Moderator Elaine Quijano of CBS let Pence get away with a lot of his past, but a feisty Kaine—judged too feisty by my cable-news peers, but just feisty enough by me—didn’t make the same mistake. The high point of the debate came at the very end, when Pence tried to pinch the very Catholic Kaine for his support for a woman’s right to make her own choice on the question of abortion. Kaine wasn’t having it. “That’s something we trust American women to do,” the Irish Catholic Virginia senator said firmly. “The very last thing that government should do is punish women who make reproductive choices. Why don’t you trust women to make this choice for themselves?”

Given that Kaine’s selection by Clinton last July disappointed many feminists, it was a remarkable way to end what was otherwise a herky-jerky, uneven debate.

Pence did well enough for the cable pundits, who judged him the more “serene.” The far-right fetus-funeral supporter and cigarette truther (the tobacco industry minion once wrote in an op-ed “cigarettes don’t kill”), the smoother-talking Todd Akin, Pence had been presented as the “moderate” on the ticket, the one who might reassure Americans afraid of Trump that there’s a grown-up in charge. American women, however, are as threatened by Pence as by Trump. As I’ve written before: Trump likes controlling women sexually; Pence does it politically. When it comes to women’s rights, they are two patriarchs in a pod. And Pence showed it.

He also showed that he can lie as well as Trump. Time and time again Kaine or Quijano presented Pence with stands that Trump had taken, only to see the loyal VP nominee deny Trump had ever said any such thing. Pence also lied about his own record, insisting the only reason he tried to zero-out Planned Parenthood’s federal funding was because that was a “fiscally responsible” way to address the deficit. No one believes Pence on that, including his own far-right supporters.

The anodyne, white-haired Pence, who looks like he’d been sent by central casting to play the disarming, grandfatherly right-wing zealot that he is, did his best to make Trump seem like a reasonable presidential candidate Tuesday night. Meanwhile Kaine, “America’s nice dad” (in the words of comedian/author Sara Benincasa), was strangely judged the rude guy by cable pundits. Yes, he did interrupt some, partly when the placid Quijano failed to challenge Pence on any of his dissembling. “Six times tonight I have said to Governor Pence I can’t imagine how you can defend your running mate’s position. And he has not,” Kaine said toward the end of the debate. But Quijano almost never followed up.

Still, while I didn’t entirely get her focus on foreign policy, given these were the VP choices, I appreciated her questions about Syria that led to Pence suggesting he thinks Trump should take military action there. Here goes:

About Aleppo and Syria, I truly do believe that what America ought to do is immediately establish Safe Zones so that families with children can move out of those areas, work with our Arab partners real-time, right now to make that happen. The provocations by Russia need to be met by American strength. If Russia continues to be involved in this barbaric attack on civilians in Aleppo, the US needs to be prepared to strike military targets of the Assad regime, to prevent them from this humanitarian crisis taking place in Aleppo.

Pence and Kaine also sparred over the appropriate reaction to the epidemic of police killings of young black men, with the GOP nominee accusing Clinton of using “a broad brush to accuse cops of institutional racism.” He also attacked Clinton for claiming the problem of “implicit bias” dogs police officers (even African Americans). Kaine shot back: “I can’t believe you’re defending the position that there’s no bias.”

Kaine also hit Pence repeatedly with Trump’s false assertion that most undocumented Mexican immigrants are rapists and criminals. The last time it came up, the GOP nominee sounded flummoxed. “You whipped out that Mexican thing again!” he told Kaine. I thought that would seal the debate for Kaine, since it sounded so hilarious, but alas, the cable talkers disagreed. I believe the polls will show voters saw it closer to the way I did. The GOP VP nominee was defeated by a guy who has more genuine respect for his running mate than Pence does for his. That’s what matters, and that will make all the difference.