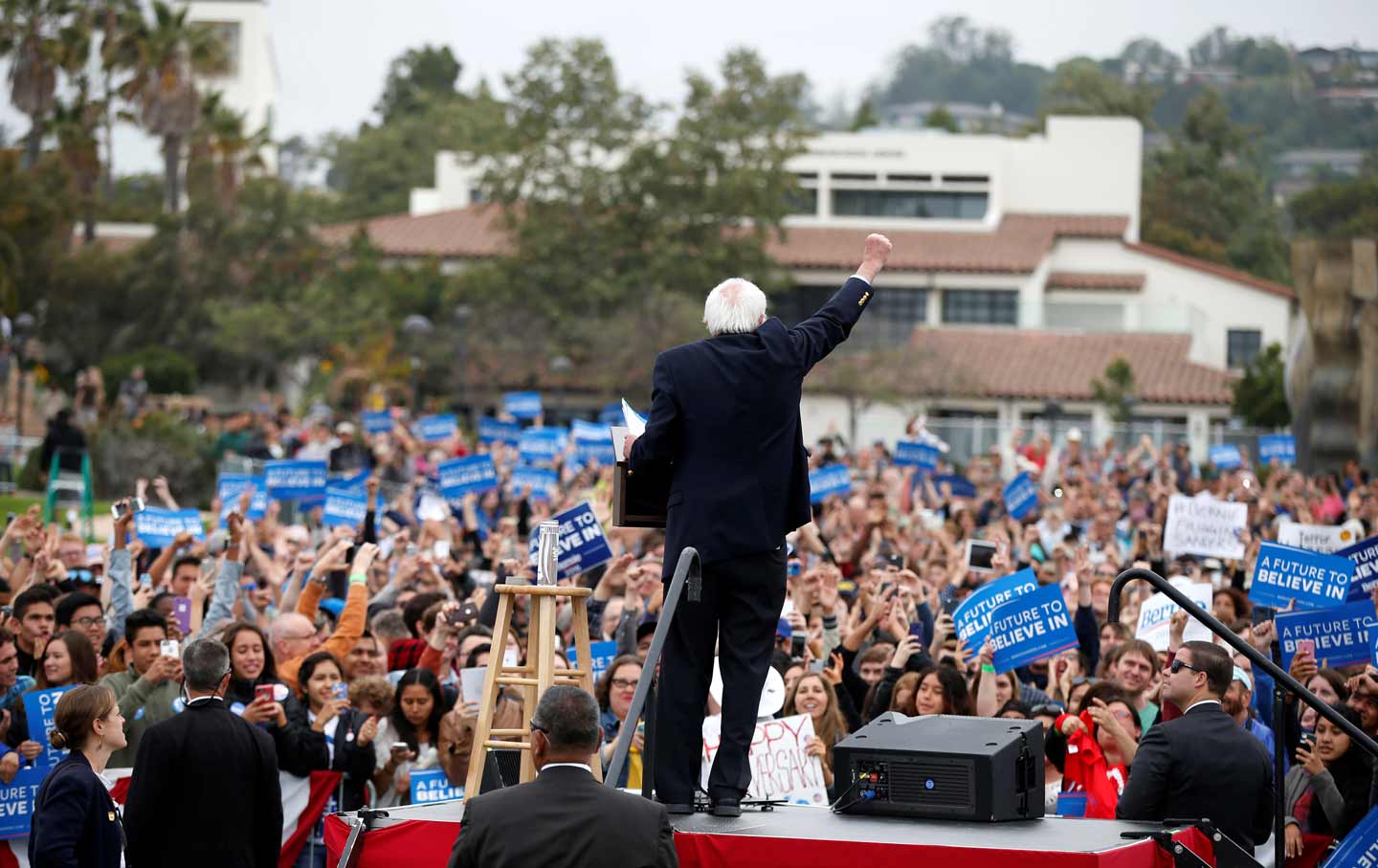 A year ago, Bernie Sanders launched his presidential campaign with an expression of outrageous faith in American democracy. At a point when the pundits said that the race for the Democratic nomination would be an afterthought, Sanders argued that a campaign “paid for by the people, not the  billionaires” could upset expectations and begin a political revolution. By many measures, he has succeeded wildly: attracting huge crowds to rallies; drawing millions of young people and disenchanted voters to the polls; driving critical issues into the campaign; and winning 20 contests, 10 million votes, and about 1,500 pledged delegates by mid-May. Those numbers will rise substantially by the time the primary season comes to a close in mid-June. When it does, however, the challenge for the Sanders campaign will be to keep its sense of purpose. Sanders himself may not secure the nomination, but his supporters could yet secure the future—if they maintain the combination of idealism and fortitude that has been the campaign’s strength, while refusing to become enmeshed in personality clashes and petty feuds.

That won’t be easy for a campaign that came achingly close to winning. Sanders and his team will arrive at the Democratic National Convention with the largest insurgent delegation in modern history. Hillary Clinton and her supporters must welcome them and, when it is possible and necessary, bend to their sincere demands for better rules and a more progressive platform. For that to happen, however, the Sanders campaign must maintain a scrupulous focus on reforms that would democratize the party going forward rather than relitigating the election that was, as well as on platform proposals that push the party to fully embrace an economic- and social-justice agenda.

To her credit, Clinton has already responded to some of these demands by moving left on everything from raising wages to trade policy to blocking the Keystone XL pipeline. But lingering skepticism about the sincerity of those moves, as well as a sense that the deck has been stacked against Sanders by party elites, has led to rancorous skirmishes between the campaigns’ supporters, including a much publicized clash over a handful of delegates at the Nevada state convention. Media outlets have rushed to pronounce a party schism that rivals that of the Republicans.

The Clinton and Sanders camps do have differences—on how aggressively the party will address economic inequality, and on how to build a party that is open and inclusive. These differences cannot be waved away; they must be addressed honestly and with an eye toward building trust between the campaigns and with a progressive electorate. There are some places where common ground will not be found. But it is important to recognize that the party is far less fractured than the media would have us believe. A mid-May New York Times/CBS News poll found that 72 percent of Sanders backers would vote for Clinton; at the same point in 2008, only 60 percent of Clinton backers said they would vote for Barack Obama.

The Democrats can achieve unity around a progressive agenda if party leaders recognize the need for a clear alternative to Donald Trump; if the Sanders camp helps outline that agenda; and if the Clinton camp embraces enough of it to indicate a real break with the past. Some of this is already happening: Under pressure from the Sanders camp, Democratic National Committee chair Debbie Wasserman Schultz appointed a notably progressive platform-drafting committee. Sanders was given five places, and he filled them with people who will fight for bolder policies on climate change (350.org’s Bill McKibben), inequality (Congressional Progressive Caucus cochair Keith Ellison), Middle East peace (the Arab American Institute’s James Zogby), racial justice (Dr. Cornel West), and the need for an inclusive vision that speaks to all Americans (Native American activist Deborah Parker). Committee chair Elijah Cummings promises that Sanders backers will be heard, and they will have allies among the six Clinton picks, including labor activist Paul Booth and Congressman Luis Gutiérrez, as well as nonaligned members like Congresswoman Barbara Lee.

The platform can also serve as a signal that the party is ready to fight not just for a win in November, but for a new era of progressive governance—an era that might include Bernie Sanders chairing the Senate Budget Committee; new progressive leaders like Zephyr Teachout, Pramila Jayapal, and Lucy Flores elected to Congress; and Senator Elizabeth Warren elevated to an even higher profile, perhaps as vice president. The role that Warren now plays in framing the party’s anti-Trump message offers an indication of what is possible. She and Sanders must be given prominent roles at the convention and in the general election. The Clinton camp should recognize that this is precisely what’s needed to energize her candidacy.

Some Sanders backers may be uncomfortable with the notion of blending their insurgency into a campaign and a party they have challenged. But political revolutions are often long games, and the way to win the long game is not with bitterness and retribution. A Democratic Party that incorporates and embraces the ideals of the Sanders campaign and the people who supported it will be better positioned to defeat Donald Trump in November—and to govern the country with a resounding progressive mandate in the years to come.