Philadelphia—As the Democratic National Convention drew to a close yesterday, the sidewalks in downtown Philadelphia were filled with people who, for one reason or another, were spending the DNC outside, rather than inside, the Pennsylvania Convention Center. Some were critical of the entire Democratic establishment; others were simply dissatisfied with a Democratic presidential nomination they see as rigged. We spoke to first-time voters, activists, and independents. All of them wanted to express their dissent to the Democratic Party and disrupt the status quo. 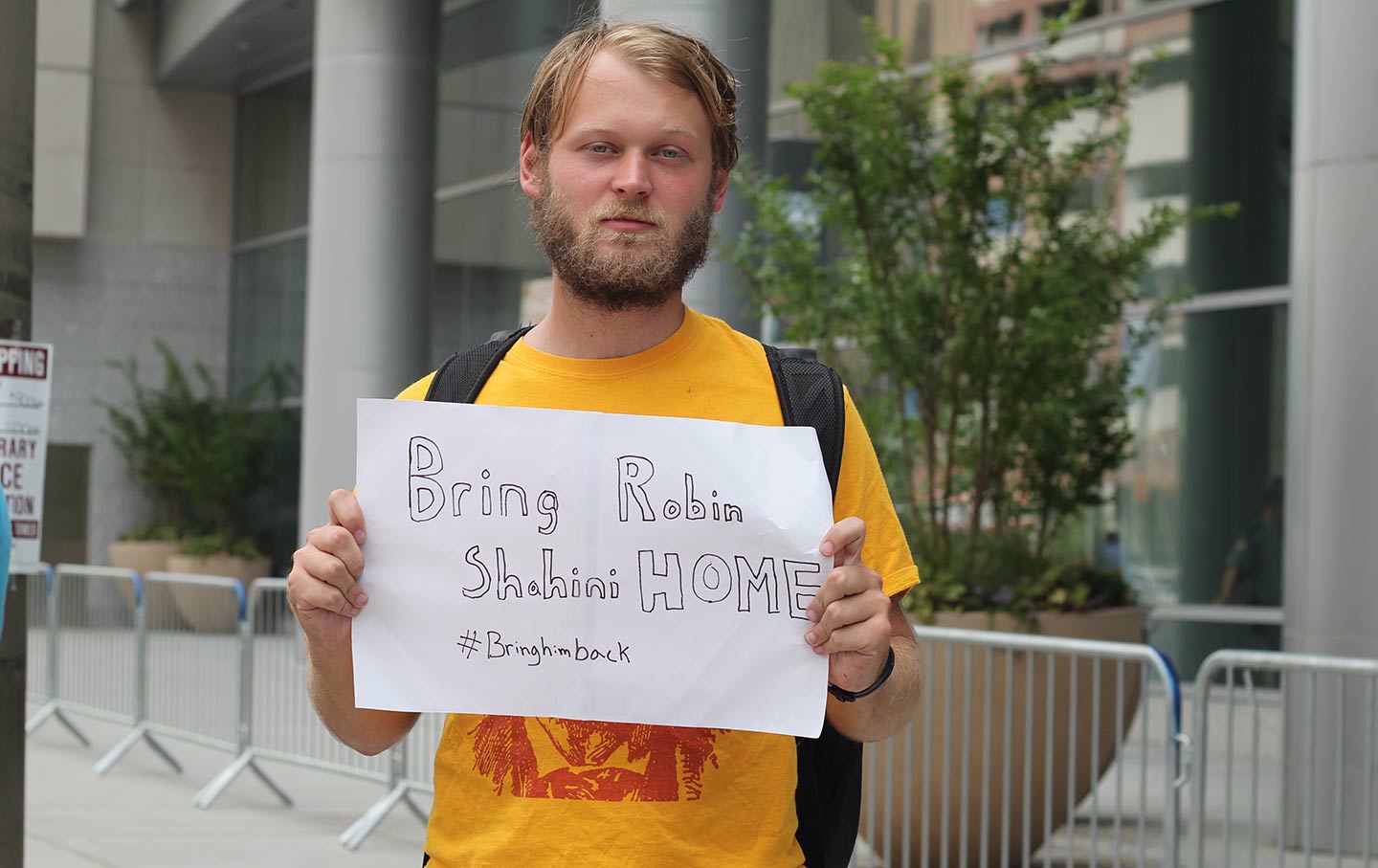 Joshua McCowen, 21, an undergraduate student concentrating in international studies at Saint Mary’s College in Newburgh, Maryland, was protesting outside the Pennsylvania Convention Center as an attempt to bring attention to the disappearance of Robin Shahini, 46, an Iranian-American classmate of McCowen’s who was detained recently while visiting family in Iran. “I don’t think the Democrats will look out for someone like him,” McCowen said. “If you’re a journalist, you stand a better chance. But Robin—a regular guy who really struggled to be here—has gotten no publicity so far.” 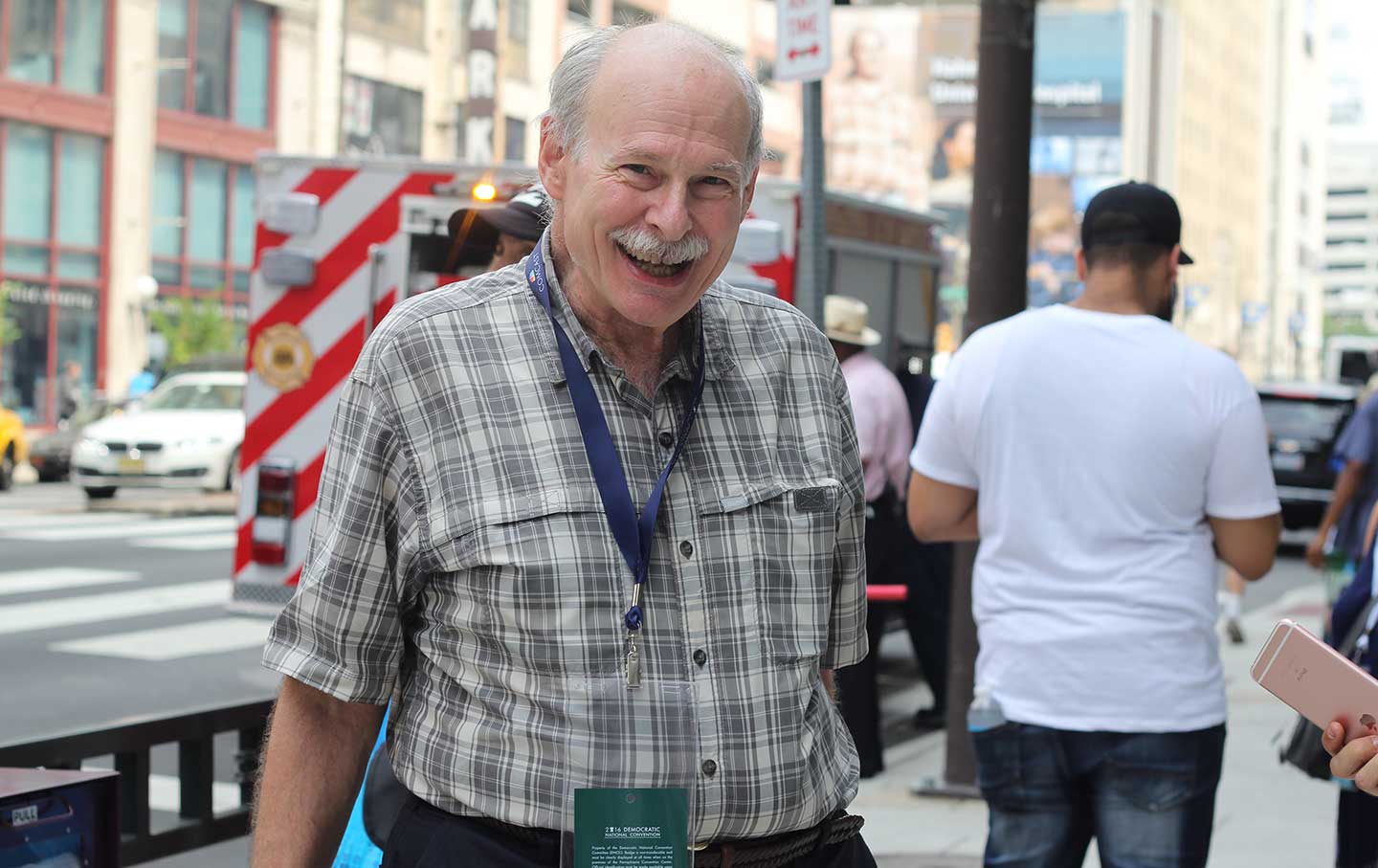 Robert Hammer, 70, was passing around a sign-up sheet for “Our Revolution,” a new group created by Bernie Sanders to continue the mission of his campaign beyond the presidential election. This is Hammer’s first stretch of political activity since 1968, when he worked for Senator Eugene McCarthy. “In fact, I was in Connecticut helping McCarthy’s campaign when Lyndon Johnson announced he wasn’t going to run again,” he said. “Then everyone shifted toward Bobby Kennedy. And then he got assassinated.” We asked Hammer if he saw any similarities between then and now. “I regret to say that, yes, the inability to tolerate differences of opinion, to take into account different views…. it seems some Hillary supporters wouldn’t even tolerate the presence of the Bernie delegates.” 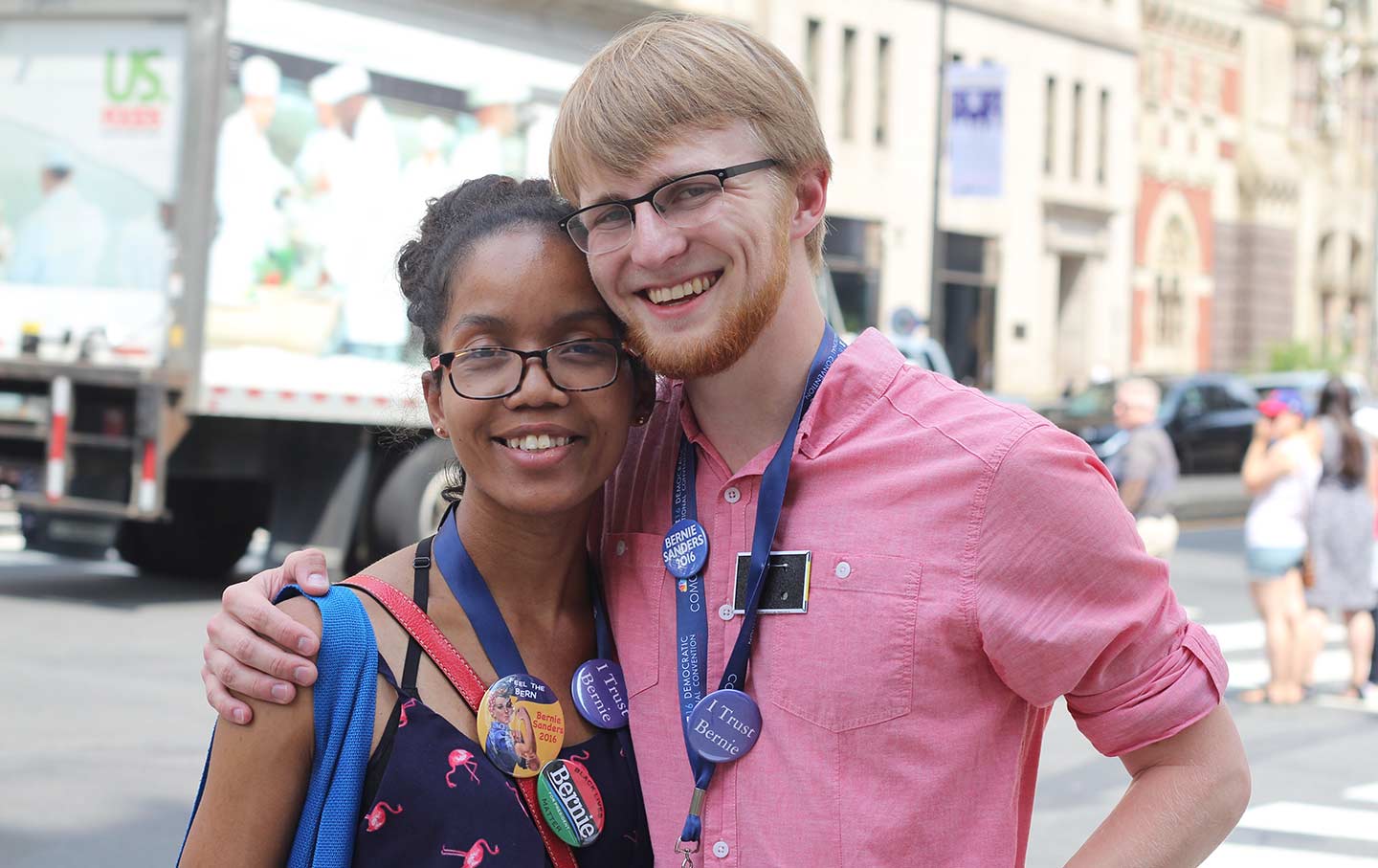 Mina Davis, 23, is a pledged delegate to Bernie Sanders from Omaha, Nebraska; Aaron Ratigan, 22, also a pledged Sanders delegate, is from Lincoln, Nebraska. “We have had people come up to us and ask, ‘Are you with her yet?’ And I’m like, ‘Excuse me, don’t invalidate me and my electorate’s contributions,’” Davis said. 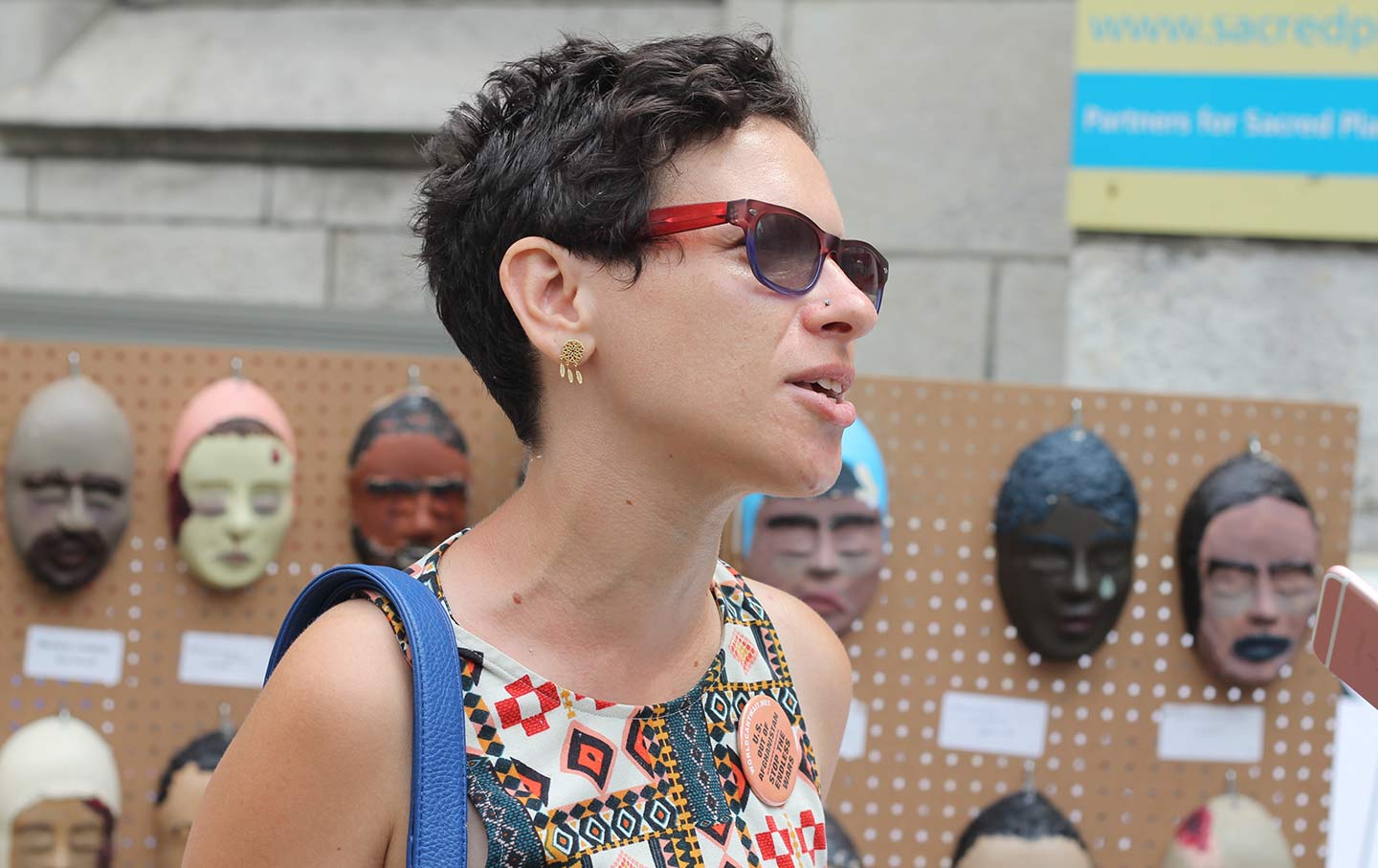 Samantha Goldman, a kindergarten teacher from Philadelphia, stood beside a papier-mâché drone hung up on the sidewalk. The drone is one piece of an art installation made by “The World Can’t Wait,” an anti-war group that Goldman is a leading member of. “Most people aren’t very familiar with the faces of the victims of our wars, from 2001 until today,” Goldman explained. “So we wanted to bring that a piece of that reality here.” 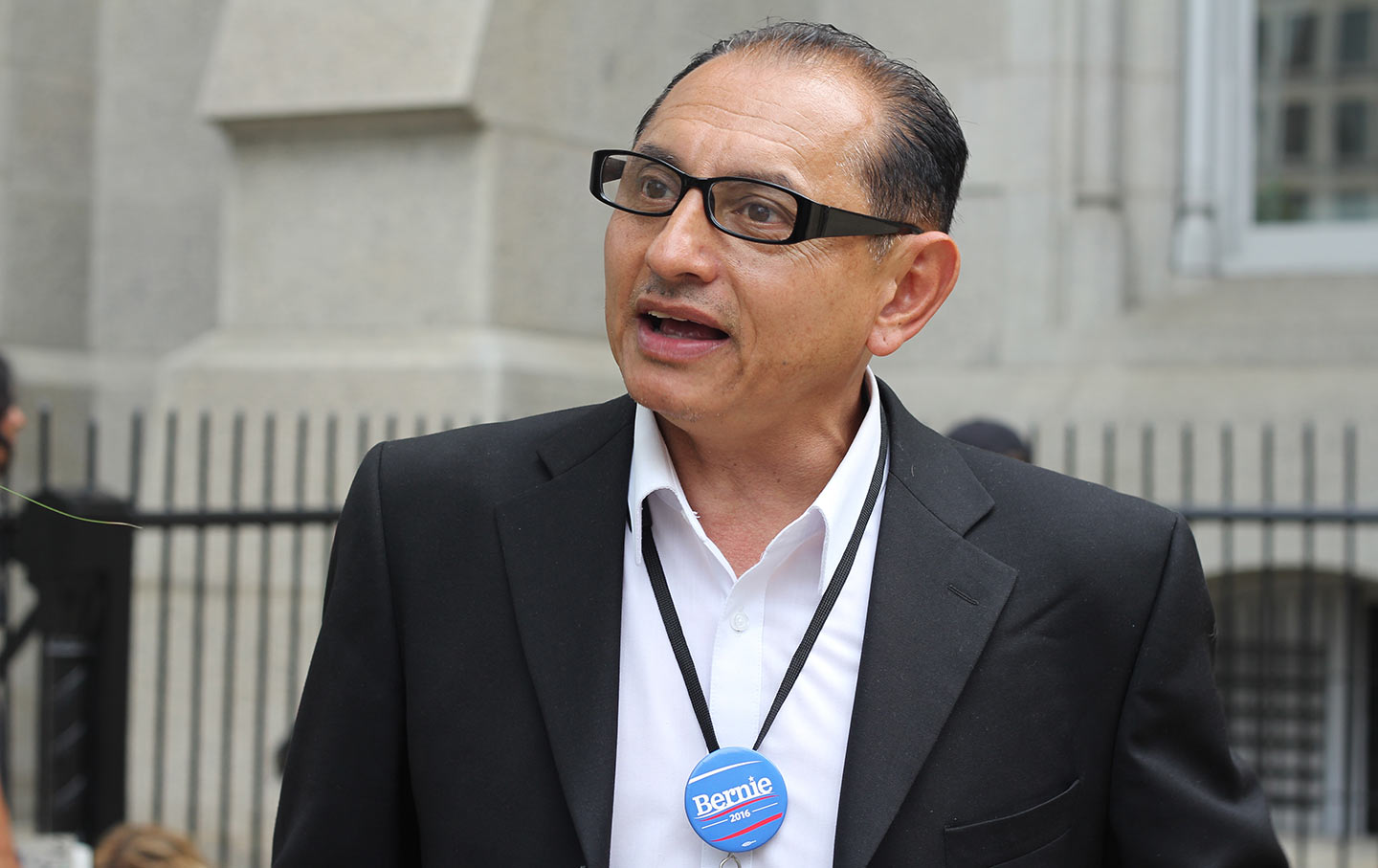 Carlos Marroquin, 57, came from California to be an honorary guest at the convention. In 2011, he lost his home to the bank. “I went to every possible agency to get help, and I couldn’t get help,” he recalled. He believes that if Trump ends up in the White House, it will be a direct result of the Democratic Party’s pushing for a candidate that nobody wants. “I leave here with my heart in my hands, broken,” he said. “I will not offer my support to Hillary Clinton, because her money is tied up in Wall Street and I fought for people that were losing their homes. She put the blame on them, not Wall Street.” 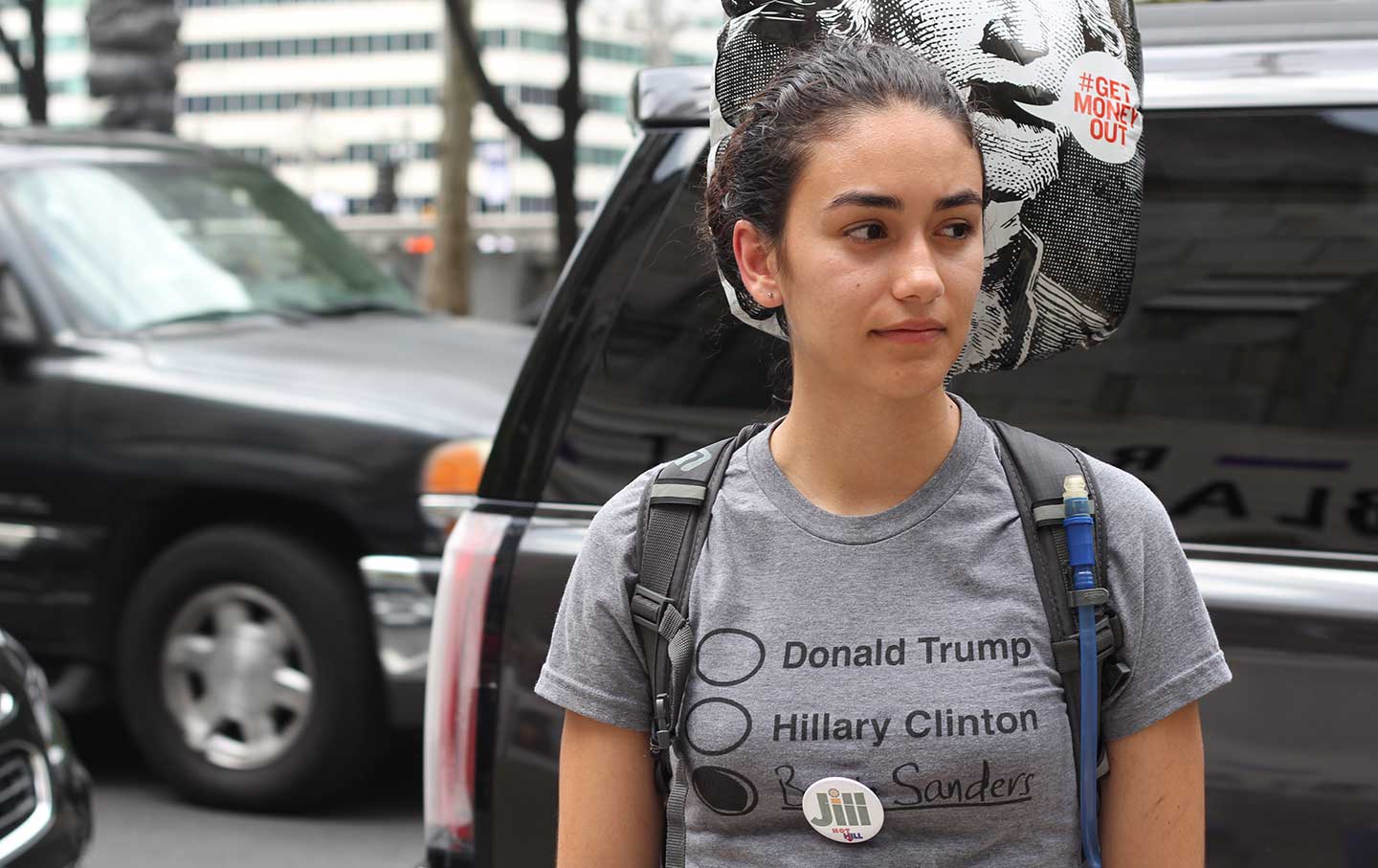 Vanessa Perez, 23, flew in from Florida alone on Sunday morning. She attended almost all of the protests that have happened at the convention. “There’s been a lot of positive energy. Many people are here angry, but we’re here to make change, not to sit around and complain.” Although she doesn’t believe in sticking to one party or candidate, she believes the Green Party can be a strong voice for progressives. “I think it should always be about the issues,” she said. “Other countries in the world have multiple parties, and we essentially have a two-party system.” This election, she said, she will be voting for Jill Stein. “I’m not going to be overly optimistic and say she will win, but the more support she gets, the more support the Green Party gets.” 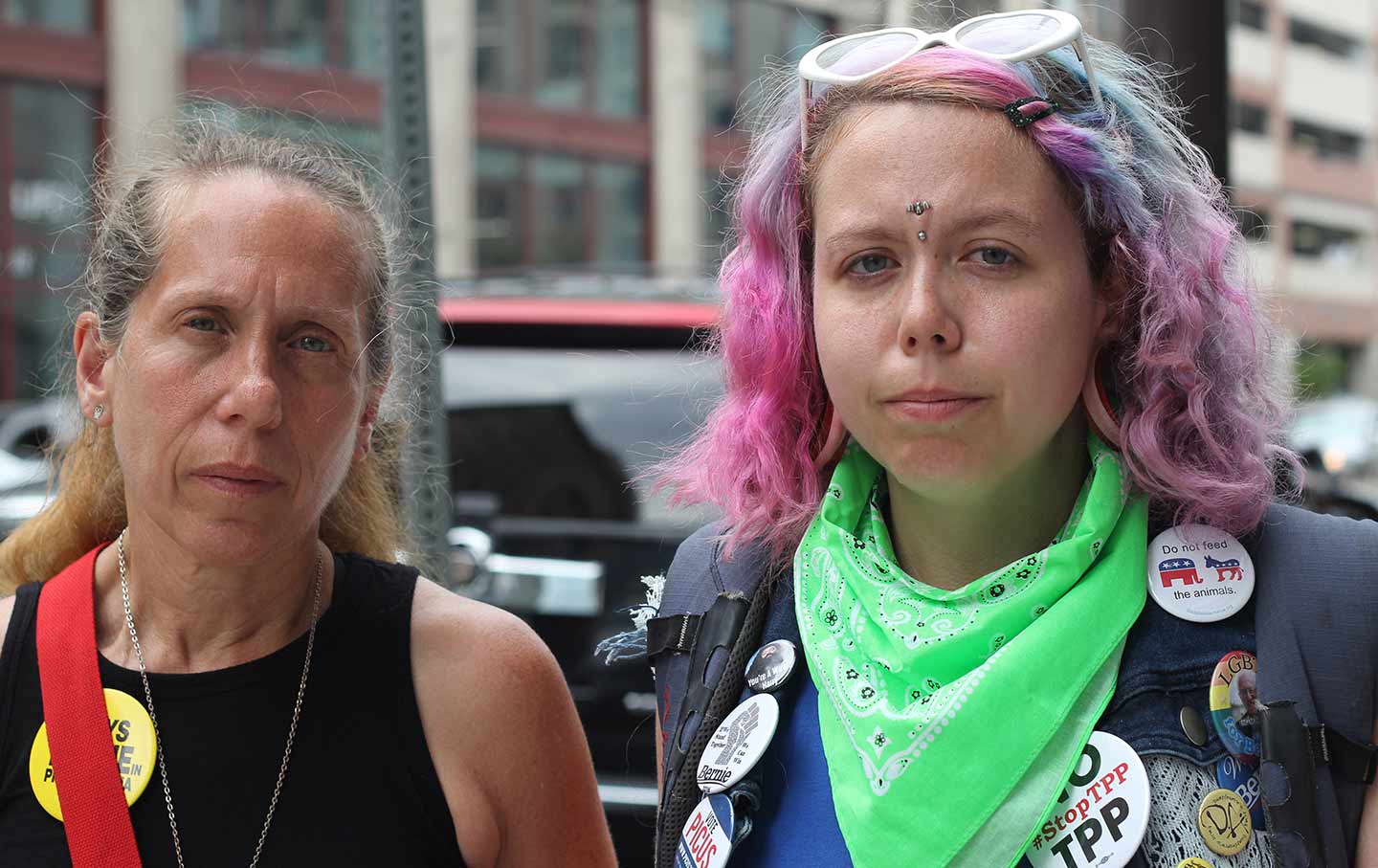 Cassandra Inglesby, 27, came from San Francisco with her mom, Eileen Inglesby, who joined her from Skokee, Illinois. They came here for “Bernie delegate solidarity,” she said, and to protest the “corruption and collusion” at the DNC. Since last June, Cassandra has volunteered for the Sanders campaign, carrying a Bernie sign with her wherever she has gone, every single day. Through phone banking, online activism, canvassing, registering hundreds of voters, and volunteering at rallies and events, she says she got the opportunity to talk to homeless people, veterans, people struggling with addiction, and people struggling to pay their rent. “I ran to be a delegate and I didn’t win, but I was able to see the inside of the process that I would have never even have known otherwise,” she said. She will continue to participate by starting a progressive political club back home in San Francisco, fighting for local candidates. “I’ve been changed by participating in this movement,” she said.