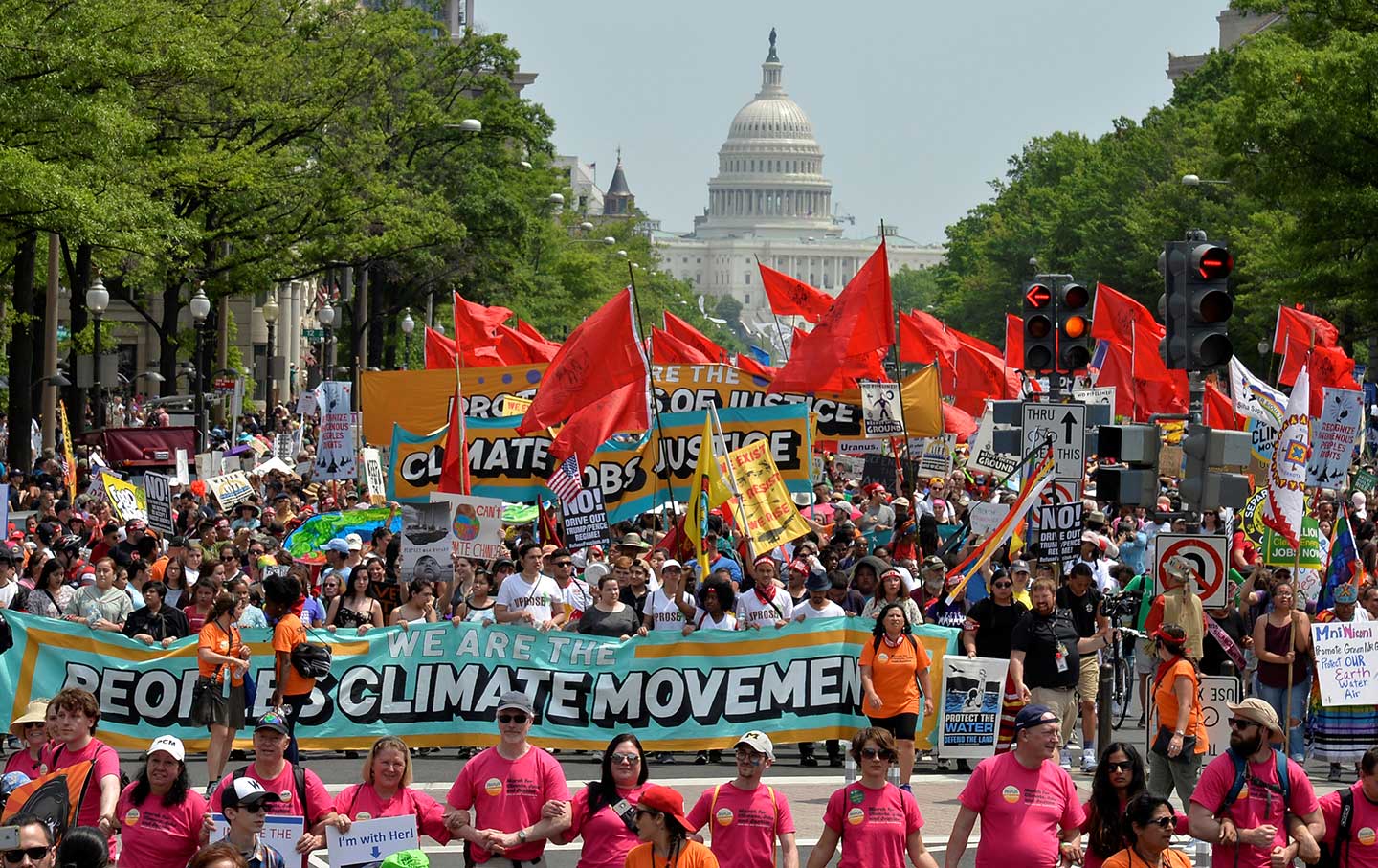 Washington, DC, was sweltering on the 100th day of the Trump presidency, but that didn’t stop 200,000-some people from crowding the streets of Capitol Hill for the Peoples Climate March this Saturday. Indigenous water protectors led the way, announcing the arrival of the march with hand drums, songs, and Leonardo DiCaprio at their side. Activists, nurses, veterans, students, and science wonks trailed behind for blocks. Adorned with colorful costumes and puppets, they swayed to the brass bands, bhangra, and spontaneous outbursts of “We Shall Overcome” puncturing the crowd.

The march was the big tent of the climate movement, populated by both anti-capitalist activists who had blocked pipelines with their bodies, and Hillary Clinton supporters offering legislative solutions for combatting climate change. Several blocks behind the lively Black Lives Matter activists, a band of uniformed Boy Scouts crowded around their chaperone. A Chinese monk marched by a man in a polar-bear suit, visibly overheated as if in solidarity with his real-life Arctic counterparts.

“I Am a Marshall Islander. Where Will I Go?” read the sign that Netty Ley was cradling as she sat in the grass, watching the contingent of religious groups—“Keepers of the Faith,” as their banner announced—stream by.

“I couldn’t believe how much of the beach has eroded, and how much closer our house is now to the water,” said her husband, James, of their house on the tiny Pacific island that is quickly becoming engulfed by sea-level rise.

“A lot of our allies are realizing that this isn’t just a Native problem,” said Faith Spotted Eagle of the threats that the Keystone XL and the Dakota Access Pipelines pose to the Missouri River. The Yankton Sioux Tribe grandmother—famed for resisting Keystone XL under Obama, and then for being the first Native person to receive an Electoral College vote for President—spoke with pride about the wind farms that her South Dakota tribe, along with six other Sioux tribes, was launching through their Oceti Sakowin Power Authority.

But for Faith Spotted Eagle, as for climate activists around the world, Trump has also set back the clock of progress. With Keystone XL now resurrected, Spotted Eagle was also reviving the unlikely Cowboy and Indian Alliance, whose white landowners and grassroots indigenous activists rode upon Washington in 2015. “We have 17 million water users along the Missouri River that also use this lifeline for their grandchildren,” she said.

Many at the march had their targets set on Trump, who, in his first 100 days, has proposed defunding the Environmental Protection Agency, staffed several agencies with climate deniers, threatened to pull the US out of the Paris climate accord, and rolled back air and water regulations to buoy the dying coal industry. Just days before the march, Trump also signed executive orders to expand offshore oil and gas drilling in the Arctic and Atlantic Oceans, and to consider overturning the designation of more than 100,000 acres of natural sites as “national monuments.” Maybe for this reason, Mar-a-Lago was a recurring theme on the protest placards (“Mar-a-Oh-No!” accompanied by a cartoon of Florida drowning; “Baked Alaska, Not Just a Mar-a-Lago Dessert”).

“The Earth was the first of God’s creations, and in terms of environmental justice, we’re destroying our earth,” said Pat Harper, who had traveled from Chicago, and was marching with 40 others from the interfaith group Faith in Place. “We talk about being conservative—well, conserve our earth. Conserve our water and air, give us natural lands.”

But amid the protest against Trump, some—like Faith Spotted Eagle—were also armed with visions of a just, green future that don’t simply conserve the status quo. Their visions include community-owned solar initiatives to provide low-cost, renewable energy to low-income residents, and establishing green manufacturing in neighborhoods that might otherwise be subject to gentrification.

Traveling from Brooklyn, the members of UPROSE carried painted images of Chico Mendez, Berta Carceres, and Grace Lee Boggs—all environmental activists who had passed away—their faces bobbing above the marching crowd. UPROSE is based in the Latino and Chinese immigrant neighborhood of Sunset Park, which is also home to New York City’s largest Significant Maritime and Industrial Areas (where heavy industry is clustered).

“But we’re losing it because of speculating developers who are turning it into the next destination location for the privileged,” said UPROSE’s executive director, Elizabeth Yeampierre. With skyrocketing housing costs already pushing many low-income residents out of Sunset Park, reserving space in the neighborhood for green manufacturers would not only slow the process, but also provide local, green jobs. According to Yeampierre, “We’re trying to get the governor and City of New York to understand that the industrial sector is the vehicle for our salvation.”