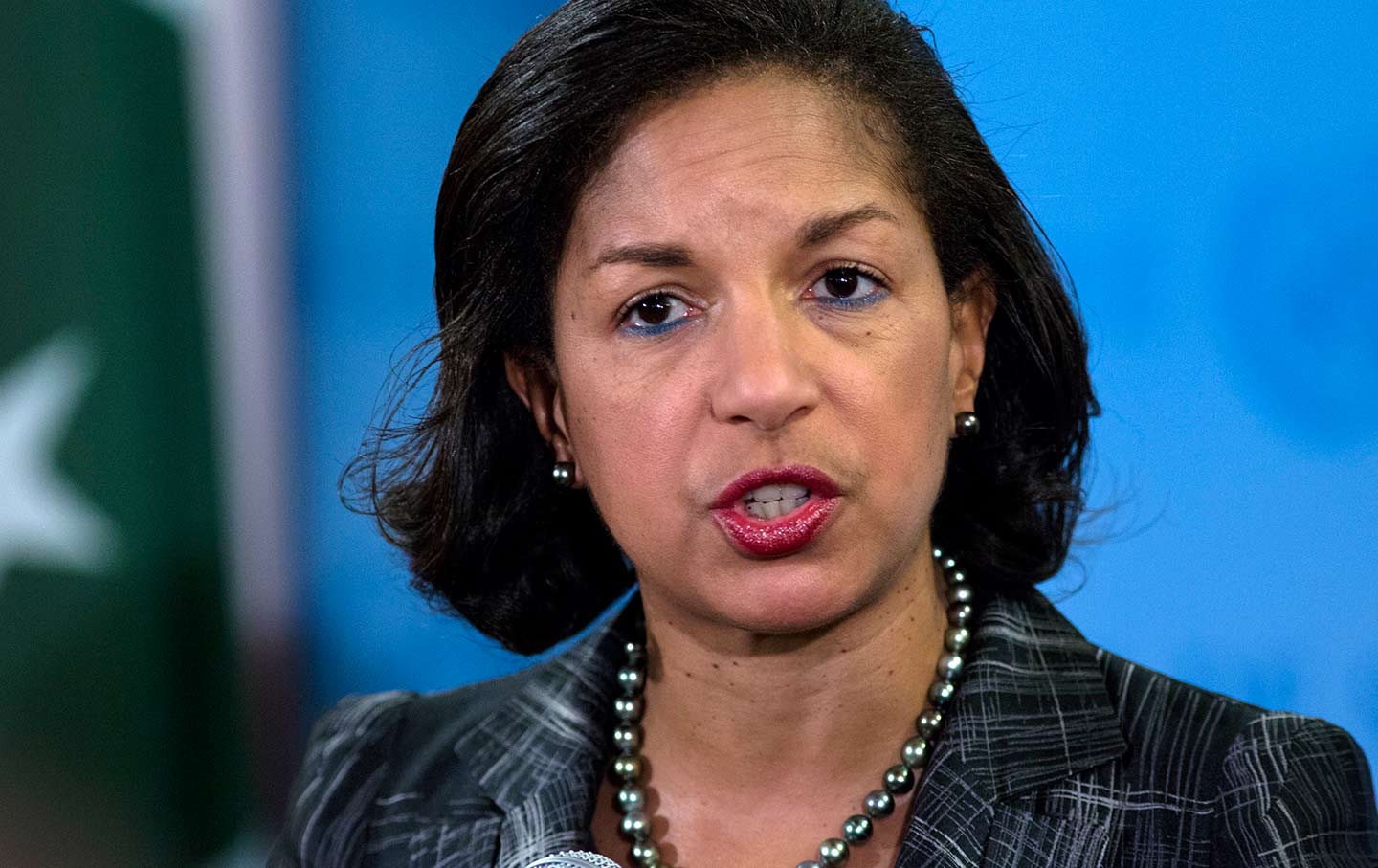 It’s been a day since Bloomberg’s Eli Lake reported allegations that former national-security adviser Susan Rice asked to “unmask” the identities of certain Trump transition officials captured in intelligence reports, and the right is calling for her head. This is the story that was leaked by White House officials to House Intelligence Committee chair Devin Nunes, you’ll recall. The unmasked Trump people weren’t intelligence targets themselves, but were talking to foreign officials who were. In Lake’s telling, it was Rice who allegedly asked intelligence-agency leaders to reveal the names, which are normally “masked” to protect US citizens caught in foreign-intelligence gathering. Senator Rand Paul claimed Lake had identified the “smoking gun” that validated Donald Trump’s claims that the Obama administration was “spying on” him.

Of course, it was no such thing; even Lake reported that what Rice was alleged to do was neither a crime nor evidence of Trump’s ludicrous claim. Security officials went further: Former CIA director John McLaughlin told MSNBC’s Andrea Mitchell that Rice was just “doing her job.”

But this isn’t the first time Paul has gone after Rice. She was the designated fall gal in Part One of the GOP’s Benghazi freakout, after she went on the Sunday shows shortly following the 2012 attack and, using a series of talking points developed by the CIA in collaboration with the State Department, shared information that later turned out to be untrue, particularly that the attack was “spontaneous.” Senators John McCain and Lindsey Graham led the attack on Rice, and the controversy ultimately blocked her from succeeding Hillary Clinton as secretary of state. But in 2013, when Obama made Rice his national-security adviser—a job that did not require Senate approval—Rand Paul tweeted: “I really question the President’s judgment in promoting someone who was complicit in misleading the American public on the Benghazi attacks.”

So Republicans now have their favorite scapegoat back in the stocks. On Tuesday, Senator Lindsay Graham accused her of previously leaking classified information: “She’s done it in the past, and whether or not she’s done it this time I don’t know, but it’s certainly something Congress should look into.” Senator Tom Cotton called Rice the “Typhoid Mary of the Obama administration,” a revoltingly sexist slur that also referred back to her role in the Benghazi investigation. Almost unbelievably (but not quite), Donald Trump Jr. gave credit for the scoop not to Eli Lake, but to the right-wing hitman Mike Cernovich, white supremacist, rape denier, and Pizzagate conspirator, who first reported on Rice’s alleged involvement. Trump Jr. tweeted:

Congrats to @Cernovich for breaking the #SusanRice story. In a long gone time of unbiased journalism he’d win the Pulitzer, but not today!

It’s like tweeting Pepe the frog. Oh wait, young Donald already did that.

In her first interview since the attack, Rice told MSNBC’s Mitchell on Tuesday the claims against her were “absolutely false.” She explained the process Lake had described only sketchily: Every morning, top security officials were given a list of noteworthy intelligence reports. According to Rice, occasionally such an official would ask the head of the intelligence agency that provided the data to “unmask” an unidentified American “in order to understand the importance of the report,” and if there was a threat. When that happened, the agency had “to go through its process…to decide if that information as to the identity of that US person could be provided” to the official in question, who was sometimes Rice herself. She made such requests, she told Mitchell, “absolutely not for any political purpose,” and added, “I leaked nothing to nobody, and never have, and never would.”

So now, a report that originated in the sewers of the alt-right with a Pizzagate conspirator who believes in “white genocide” is being widely propagated on the right, and investigated by mainstream media outlets, who are mostly debunking it, to their credit. The problem is the right’s affection for fake news, but also for racism and sexism. The mere person of Susan Rice has always engaged the right; she’s long been depicted as incompetent, as a liar, and now, as a purveyor of disease. “Typhoid Mary” wasn’t black, but an Irish immigrant, the next on the totem pole back then (though Mary Mallon did indeed spread the disease; the charge against Rice is false and offensive).

“Susan Rice is radioactive to the conservative Republican base,” MSNBC commentator Charlie Sykes admitted Tuesday, adding that she is the perfect distraction for Trump from troublesome allegations that his campaign “coordinated” with Russian government officials to defeat Clinton. It’s not hard to understand why Susan Rice galls the GOP base; let’s hope the media recognizes this as the distraction it is from the real story of Trump and Russia.