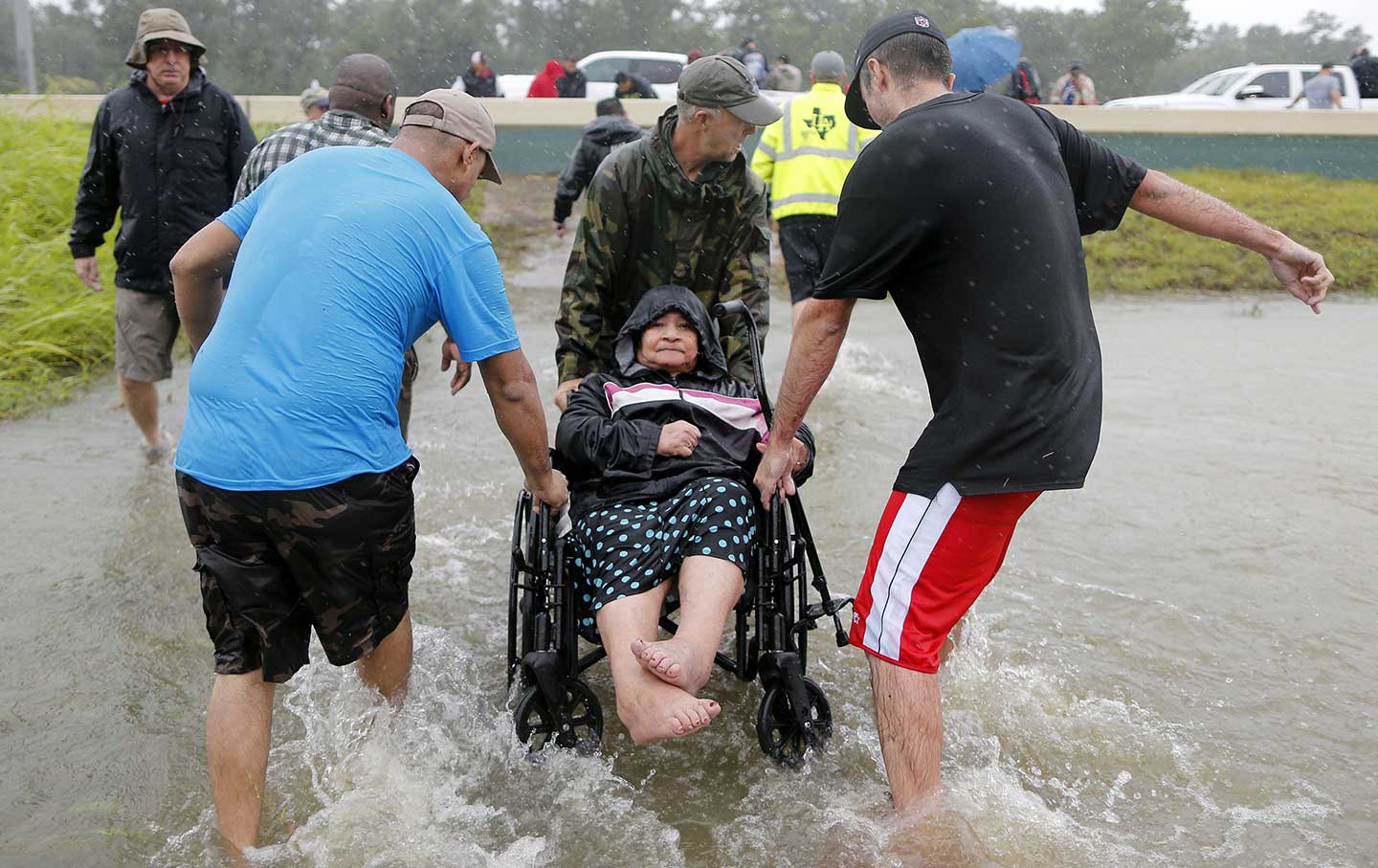 An elderly woman in a wheelchair is rescued from the flood waters of tropical storm Harvey in east Houston, August 28, 2017. (Reuters / Jonathan Bachman)

Take Action Now gives you three meaningful actions you can take each week whatever your schedule. This week, our thoughts are with those whose lives have been upended by the destruction wrought by Hurricane (now Tropical Storm) Harvey. There is a lot of good information out there about organizations that need donations at this time; for Take Action Now, we’ve listed two that focus on needs that can often be overlooked during a natural disaster. Beyond that, we’ve got information on defending DACA and joining activists who are marching over 100 miles to confront white supremacy. You can sign up for Take Action Now here.

Donate to Portlight Strategies or the Texas Diaper Bank. Though these are by no means the only organizations making a huge difference for the victims of Tropical Storm Harvey, we wanted to be sure that you were aware of their work. Portlight focuses on the needs of people with disabilities in the wake of disasters. They are currently running the Partnership for Inclusive Disaster Strategies Hurricane Harvey Disability Hotline to help those in the path of Harvey get to safety and access essential services. The Texas Diaper Bank is creating emergency diaper kits for families displaced by Harvey, a much-needed service that TDB says is not provided by disaster relief agencies.

Make a phone call to defend DACA, then learn more about what you can do. Even if you’ve answered one of our previous calls to take action to protect the Deferred Action for Childhood Arrivals program, your help is needed again. Earlier this year, attorneys general from 11 states threatened to sue to end DACA if the Trump administration did not put a stop to the program by September 5. Many believe that as that deadline approaches, the Trump administration is likely to comply with the AGs’ demands, putting hundreds of thousands of people at sudden risk of detention and deportation. Use United We Dream’s tool to call the politicians that we need to take action, then join a conference call tonight at 7 pm to learn more about you can do. You can join the call by texting DACAcall to 877877. And if you’re in NYC, you can attend a march to defend DACA tomorrow, August 30.

Join the march from Charlottesville to DC to confront white supremacy. Yesterday, activists began a ten-day march from Charlottesville, Virginia, to Washington, DC, to demand the removal of officials who enable white supremacists and the end to policies that embolden them. You don’t have make the over-100-mile march to participate; sign up here to join or volunteer for a portion of it. Even those who are far away can get involved. Follow @cville2dc on Twitter or check out the march’s Facebook page, then take a minute every day of the march to promote the action on your own feeds.