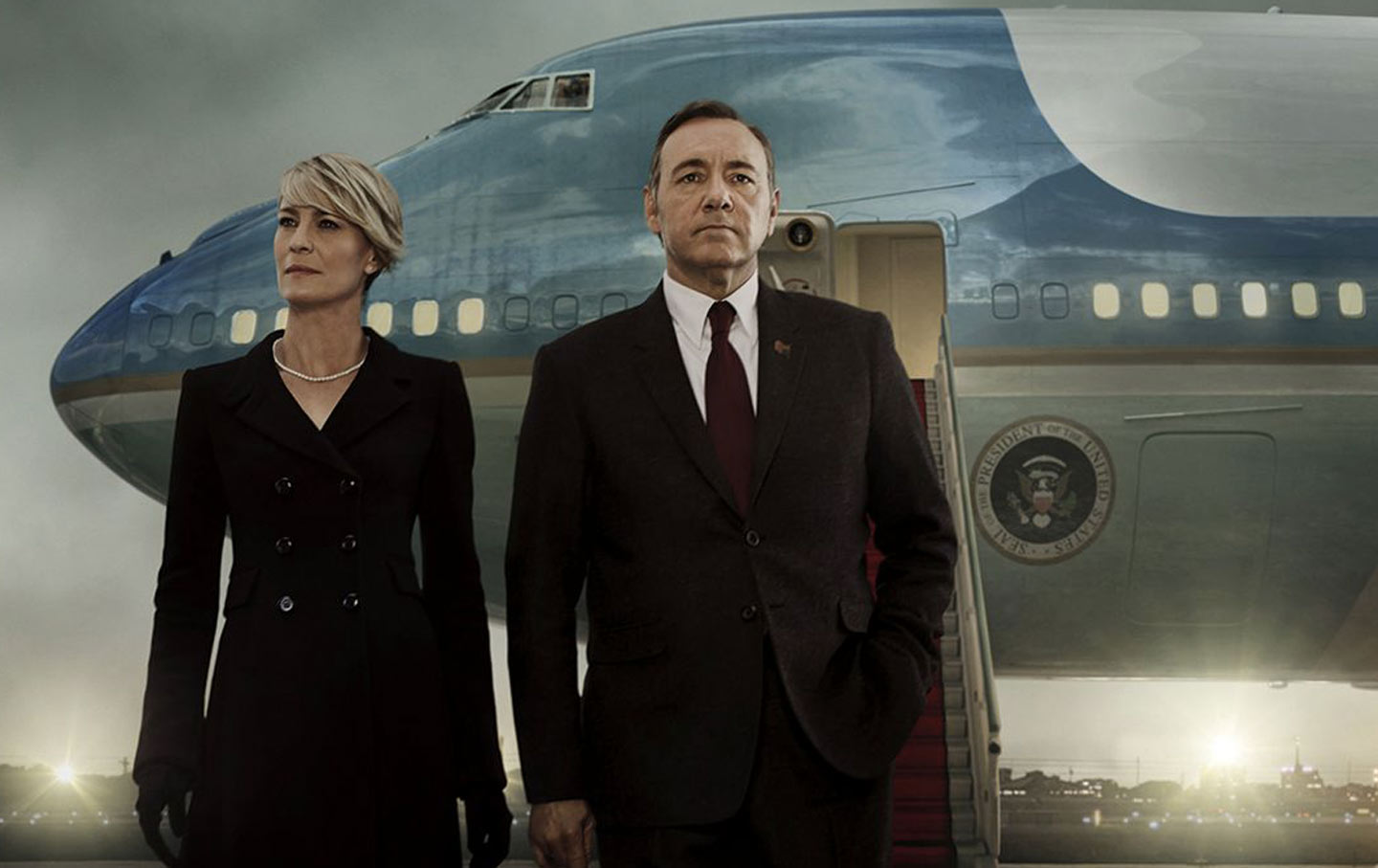 Robin Wright and Kevin Spacey star as Claire and Frank Underwood in House of Cards. (Netflix)

Given the absurdities of the current political season, it is worth asking why the return, this past Friday, of House of Cards—the Netflix drama that functions as an alternative campaign-season joyride—was so highly anticipated. For about a week or so prior to the series premiere, various New York subway stations were dressed up with astonishingly authentic-looking campaign posters for the ruthless lead character Francis “Frank” Underwood (Kevin Spacey) that may be a bit more difficult to see in merely escapist terms while Clinton, Sanders, and (heaven help us) Trump are occupying so much psychological real estate. In these ads for UNDERWOOD 2016, Spacey’s grin only hints at Underwood’s duplicitous self-satisfaction, while several of the slogans are veiled references to the despicable things he’s done along the way. After three seasons, and an armload of related Emmys and Golden Globes, the series’ handlers were so convinced of Underwood’s recognizability that some posters didn’t even carry the show’s name, just the date of its availability for streaming.

The idea of art imitating life and vice versa is, of course, as pedestrian as looking both ways at a crosswalk. The trick is to make its application offer up something gratifying, powerful even, which the new season of House of Cards does quite well, particularly in its first half. The season picks up right where it left off, with Underwood, the former House majority whip who has connived his way into the presidency without the burden of having been elected, in the throes of a primary challenge. What further complicates his bid for electoral legitimacy, however, is that Claire, his wife of 30 years (an ice queen played brilliantly by Robin Wright, who also directs the opening episodes this season) is AWOL; the last shot of Season 3 is of her leaving their private residence at the White House in a tiff, upset that Underwood has just fired her as UN ambassador, the position he’d given her as a recess appointment despite her inexperience, when Congress wouldn’t confirm her.

It’s fitting that, on the show and off, a new president will be inaugurated when Season 5 rolls around. #HouseofCards

It’s this twist on the trouble-in-domestic-paradise scenario that connects House of Cards to TV’s growing list of dramas measuring the effects of political power on marriage, but, oddly enough, it simultaneously distances itself from them as well. Unlike first lady Mellie Grant on ABC’s Scandal or gubernatorial divorcée Alicia Florrick on CBS’s The Good Wife—both characters who count on their relationship to powerful men while seeking elected office—Claire Underwood has begun to show signs that she’s her husband’s equal in tactics as well as ambition. (All three match their husbands in intellect.) The game of cat and bigger cat they play as she throws the campaign into disarray from her home state of Texas introduces us to some of the season’s most memorable new characters (Ellen Burstyn as her estranged mother; Cicely Tyson as a formidable congresswoman from the other side of town; LisaGay Hamilton as her comer of a daughter; Neve Campbell as a shrewd political operative). The relationship between Claire and Frank becomes a mix of doting openness and codependency the likes of which is unique to television. Even when they’re warring with each other (which is most of this season), it’s still pretty much the two of them against the world.

But enough about Hillary Clinton. Though much of the season follows Claire’s rising political capital, it’s also driven by a high-stakes campaign that suffers some devastating, even life-threatening, blows. Underwood is a character who urges us to share in the delicious implausibility of it all, though in comparison to the current GOP political circus the show might make a case for truth being much stranger than fiction. (President Obama famously joked about the series’ lack of congressional gridlock.) Midway through the season we meet Underwood’s GOP opponent, the New York governor Will Conway (Joel Kinnaman), who, by his own admission, “is basically a Democrat.” And yet he’s still sown up the party’s nomination. Conway is obviously the devil we used to know. His biggest sins (blustery hawkishness, overexposing his photogenic family, and taking advantage of the digital realm’s gray areas for campaign data mining) seem almost quaint by the standards of his real-life counterparts, like homages to a bygone era. It’s almost enough to make you weep.

The Very American Cynicism of House of Cards

At the latter half of the season’s center is a lesson about delegates and the volatility of the nomination process that provides a good reason to savor this season in an election year. A month or so ago, Spacey had to offer fans bit of reassurance that these episodes wouldn’t be his last, especially given the uncertainty of Underwood’s electoral prospects. (Netflix had already green-lit Season 5, but the industry press was abuzz about Spacey accepting the position of film-division head at the production company responsible for House of Cards.) Then there’s the suggestion that Frank’s various misdeeds are circling back to haunt him as the narrative reacquaints us with dormant earlier characters. These reintroductions add to the show’s ominousness as much as its dark, shadowy color palette does. They also reintroduce to its most overt Shakespearean conceit: Spacey interrupting scenes by looking conspiratorially into the camera and addressing you-the-viewer directly, dispensing smug or terse witticisms that zero in on his angle, his duplicity. I realized I missed this device in the first half; it’s the only holdover from the original House of Cards, a four-episode British miniseries from the early ’90s. Far from overstaying its welcome, the series is now a wholly American barometer of power, haplessly earnest on one side, grotesque on the other. Perhaps it’s only fitting that both on the show and off a new president will be inaugurated by the time Season 5 rolls around next year.