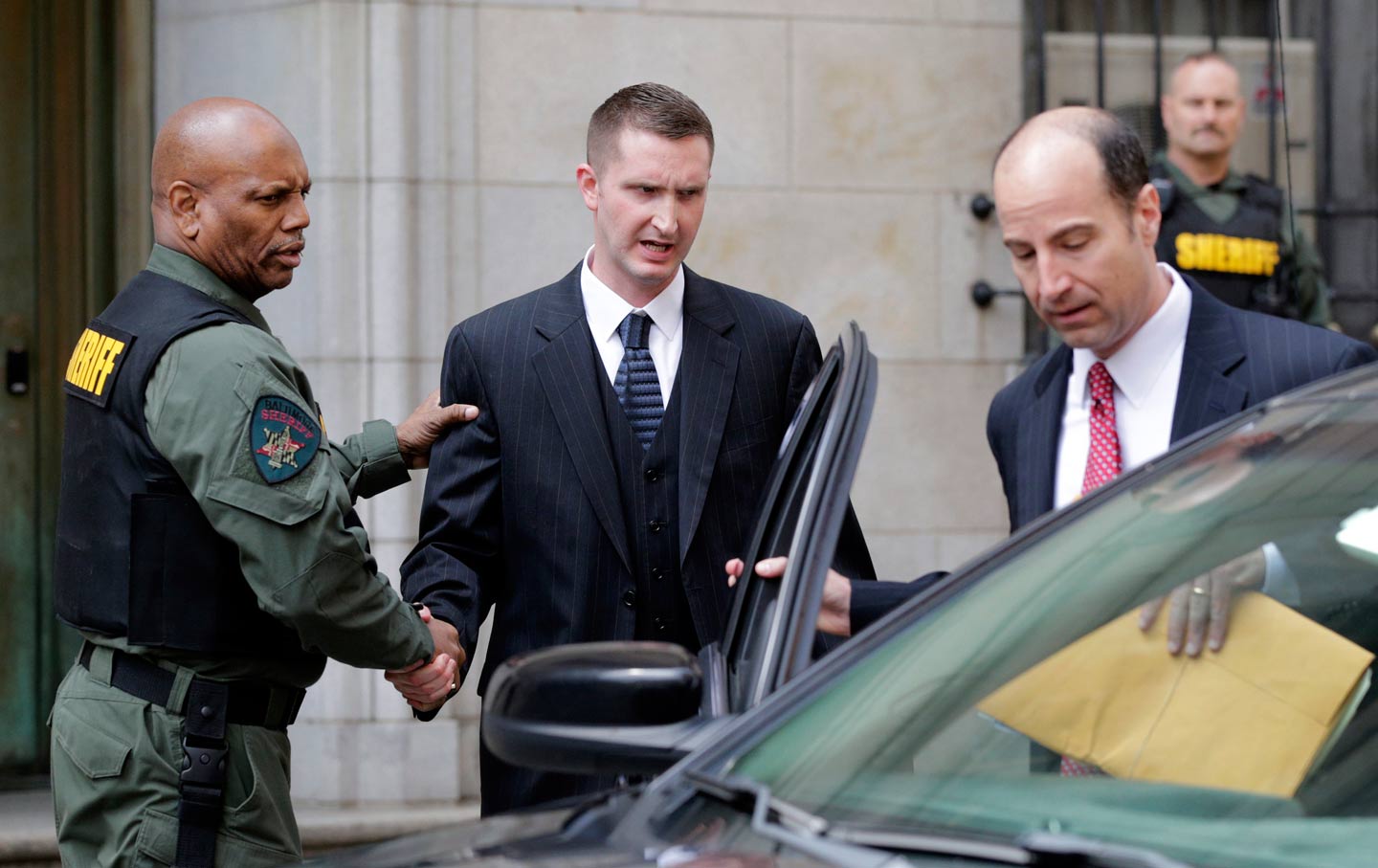 Officer Edward Nero, center, one of six Baltimore city police officers charged in connection to the death of Freddie Gray, leaves a courthouse after being acquitted of all charges in his trial in Baltimore, on Monday, May 23, 2016. (AP Photo / Patrick Semansky)

A Baltimore circuit judge has acquitted on all charges one of six officers involved in the arrest and death of Freddie Gray. Officer Edward Nero was among those who initially chased Gray, and prosecutors argued that Nero assaulted him by physically detaining him without having first questioned and searched him. The judge disagreed, raising concerns about whether any of the officers charged in Gray’s death will be held accountable.

But in Baltimore and elsewhere there’s another, equally important question that is too often overlooked: How can such awful encounters between police and residents be avoided in the first place? Mayors and police leaders are increasingly under pressure to reform law-enforcement agencies. But how likely are leaders to succeed in that task if they can see only fumbles, fouls, and double faults? That is the situation in which many find themselves.

In April, the task force that Chicago Mayor Rahm Emanuel appointed to evaluate the police department published its report and recommendations for reform. The task force emphasized the urgency of “restoring the trust between the Chicago police and the communities they serve.” It urged Emanuel to hold officers accountable for “shots fired, legal actions naming police officers” and making arrests for “disorderly conduct or resisting arrest”—several of the things that officers have been doing to violate the public’s trust. Yet it did not propose a single measure to track how well officers provide the public services we want from them.

In March 2015, the Department of Justice’s report to Ferguson Mayor James Knowles similarly found that local law-enforcement practices had undermined community trust, especially among African Americans. Its recommendations went beyond itemizing the negatives to encouraging partnership with the community and the use of de-escalation tactics. But as in Chicago, monitors offered few measures for assessing how well and how often these suggestions are implemented.

The same thing has happened in New York City. In 2014, Mayor Bill de Blasio had high hopes for reforming NYPD after reaching agreement in a landmark stop-and-frisk lawsuit. So did his police commissioner, William Bratton, who said, “I need to…be in a position to say to my officers: ‘This is how you police constitutionally,…respectfully, [and]…compassionately.’” Stops have already declined dramatically, from 45,787 in 2014 to approximately 24,000 in 2015. But has respectful and compassionate service increased in their place? With no relevant measure of these aspirations, neither de Blasio nor Bratton can know.

The adage “we treasure what we measure” offers a way forward for law enforcement reform. Imagine performance measures quantifying how effectively, lawfully, and ethically police perform. Further imagine having body camera evidence. What would these measures look like? Well, here are six examples of positive performance measures any mayor could use.

One of the most expeditious ways of judging how much police care about the community is to see how quickly they arrive on the scene. Calling 911 in Detroit has long been “a gamble,” as Stacy Cowley reported in a recent New York Times feature, with response time sometimes taking nearly an hour. In contrast, Wayne State University’s police department, which does the bulk of the policing in the city’s gentrifying Midtown neighborhood, promises 90-second responses to calls within its territory. Nefertiti Harris, a beauty salon owner, told the Times about an incident in which she called the Wayne State police “about a man rifling through cars. ‘They were there within two minutes. Five minutes later, they had him,’” she said.

As reported in a recent New York Times and Kaiser Family Foundation survey, only a third of Chicago residents believe police are doing a good job. This fact cries out for a resident-centric measure of police performance.

Like many service-oriented organizations, police departments could obtain “customer” evaluations. How often do officers receive commendations, rather than complaints from residents? For the commendation rate, a simple “thanks” for a courtesy, such as patiently waiting for a driver to find a license, would suffice. The focus is exclusively on expressions of appreciation. Officers might strive initially for one in two calls expressing “thanks” about their service: a 50 percent commendation rate. As the percentage goes up, reflecting a more favorable attitude in the community, mayors could acknowledge its rise.

The only requirement is that the “thanks” be recorded by officers’ body cameras and flagged for evaluators. This is a new understanding of how body cameras could be useful reform tools. New York Civil Liberties Union Executive Director Donna Lieberman originally cautioned that body cameras be “limited…to addressing complaints of abuse or wrongdoing.” Only recently, when she considered their potential to record positive interactions, did she say, “in terms of long-term relationships,” body cameras “may well be a tool for success.”

Ferguson’s newly hired police chief, Delrish Moss, knows what it’s like to be mistreated by the police; as a black teenager, he had run-ins with law enforcement that propelled him to become a police officer, in part so he could be a better standard-bearer. When asked about his priorities in leading the department, he said, “I want to increase the interaction—police with youth” But not just any interactions.“I am talking positive interaction.”

A positive learning interaction would consist of an officer and a resident speaking constructively and learning about one another. Detroit resident Christopher Prater described for the Times the results of this kind of exchange in Midtown’s relationship with the Wayne State police: “We’re African American. Historically, our interaction with the police has been pretty different. Here, they’re part of the community. They’re involved. We know each other by name.”

As with commendations, body cameras could capture these interactions.

It was chilling to read in the Times/Kaiser survey that 12 percent of black Chicagoans believe that calling the police in a dangerous situation would make matters worse. This attitude implies that officers sometimes agitate perilously flammable conditions.

Experts encourage de-escalation because it soothes precarious situations, minimizes the use of force, and prevents crime. All of the mayors mentioned in this article have expanded crisis intervention and de-escalation training. One example of an officer defusing a fraught situation comes from Seattle, where new training on de-escalation has begun as a result of a consent decree following a Justice Department finding of a pattern of excessive force. An officer confronted a man walking down the street with a knife and ordered him to stop. The man responded with “a vulgar gesture,” as described by the Times, but “over the next 30 minutes, the officer learned the man’s name from his wife and used it, beginning an unconventional peripatetic monologue to try to persuade him to surrender.… The man, disconsolate after an argument with his spouse, eventually dropped the knife. Instead of being arrested, he was taken to a hospital for a mental health checkup.”

Police departments urgently need a measure of this kind of skillful practice in the field. Yet another case in which de-escalation might have prevented a death occurred recently in San Francisco. As a sergeant and another officer were trying to pull a 27-year-old woman out of a stolen car she had crashed into a parked truck, the sergeant shot and killed her. She was apparently unarmed and not driving at the officers. San Francisco’s public defender, Jeff Adachi, said in a statement, “It is unacceptable for police encounters with unarmed citizens to end in bullet wounds and body bags.”

The de-escalation rate would highlight successful attempts to defuse potentially treacherous situations during calls for disturbances and domestic violence and during crisis interventions. Here is another place where body cameras or other video would be useful. Having a direct sample enables trained raters to reliably assess the tactics and progress of the situation, using agreed upon standards. Video footage, suitably camouflaged to conceal the subjects, could be shown as constructive examples at roll call, during training, to community stakeholders, and at CompStat meetings.

The last two measures, suggested to me by Donna Lieberman of the NYCLU but rarely used as performance measures, would promote lawful law enforcement.

NYPD’s stop-and-frisk policy under former Commissioner Ray Kelly was shown to have pressured officers to make “the numbers”; this along with other factors led to disproportionate numbers of young African-American males being stopped without cause. In response, Commissioner Bratton now emphasizes the quality of stops, not the quantity. Yet performance evaluation remains the same; supervisors judge officers based on their number of stops, summonses, and arrests.

A hit rate identifies the percentage of stops resulting in summonses/arrests. A qualitative measure, it indicates officers’ activity level, but also introduces a payoff. Stopping someone indiscriminately increases “numbers,” but decreases the hit rate. Whereas stopping someone with a reasonable suspicion increases the chances of finding weapons/drugs or other crimes, which enables appropriate summonses and arrests.

The same logic applies to the conviction rate, which is the percentage of arrests leading to convictions. Arresting someone indiscriminately increases “numbers,” but decreases the conviction rate. “Why should a bad arrest be an indicator of productivity?” asks Lieberman. If Mayor de Blasio were to make judgments based on hit and conviction rates, he would help assure that the NYPD stops people only for cause and arrests them only upon finding sufficient evidence of a crime.

Peter L. Zimroth, the court-appointed monitor of NYPD’s stop-and-frisk policy, calls for officers to “see evidence and…be rewarded …for doing their jobs well—for quality, not just quantity.” These six performance measures would not only enable Bratton to recognize officers for quality performance but he would also be able to head over to CompStat loaded with performance quality data. Focusing on the positive may also garner police-union support.

In 1992 Supreme Court Justice Thurgood Marshall declared, “The legal system can force open doors and sometimes even knock down walls. But it cannot build bridges. That job belongs to you and me.” Heeding the message that we treasure what we measure would assist mayors in building those difficult-but-not-impossible-to-cross bridges.