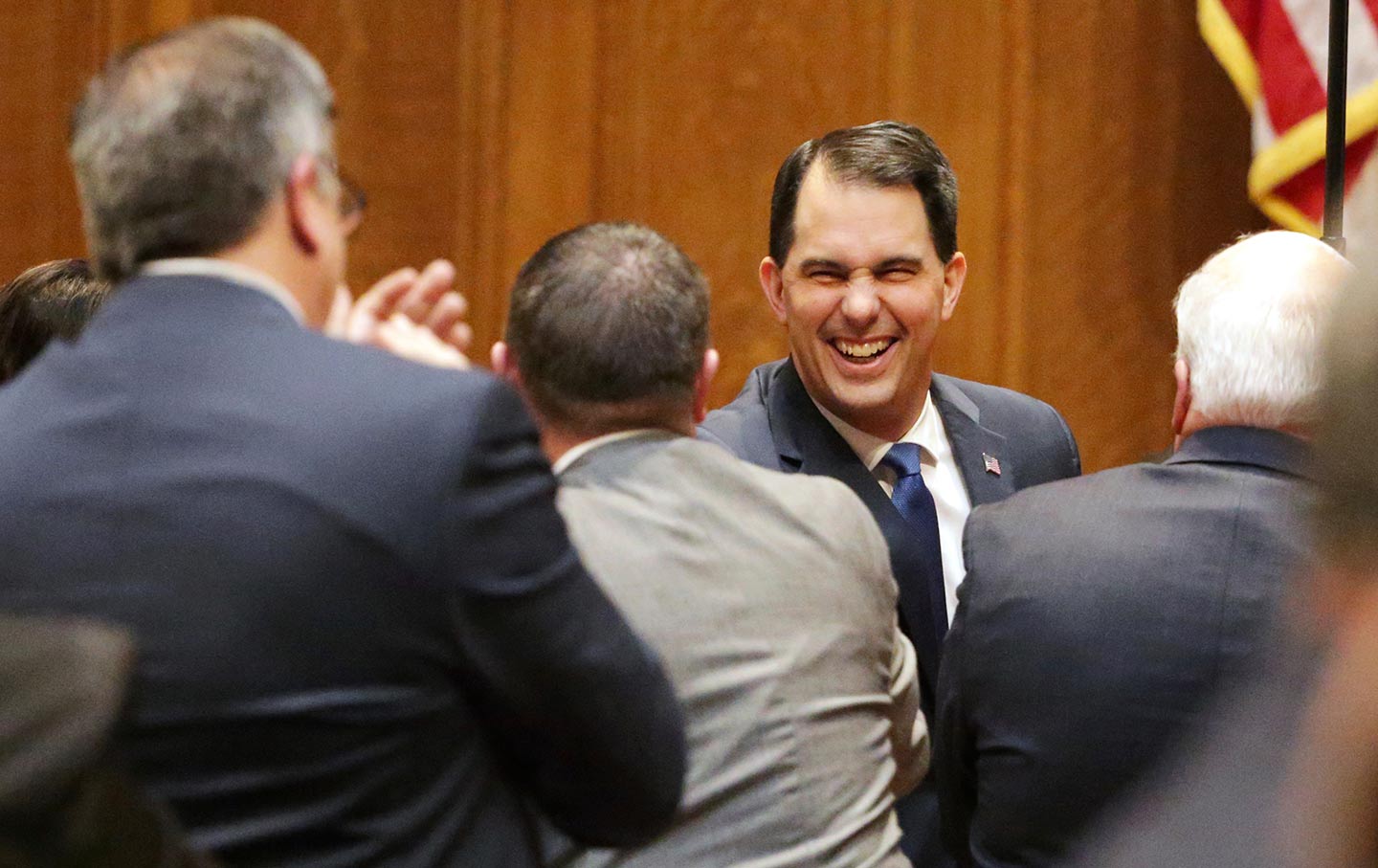 When a judge ordered Wisconsin Governor Scott Walker to stop messing with democracy and arrange for special elections to be held for a pair of vacant state legislative seats, that should have been the end of the governor’s lawless scheme to leave 229,904 people living in those districts unrepresented for almost a full year.

Everyone had figured out what Walker was up to. Fearful that special elections might see Democrats elected in Wisconsin’s historically Republican first State Senate district and its 42nd State Assembly district, Walker had simply refused to call the elections after the seats went vacant last year. The judge said last week that the governor was flat wrong.

Referring to the arguments made by Walker’s lawyers as “inconsistent, incompatible and irreconcilable,” Dane County Circuit Court Judge Josann Reynolds explained: “To state the obvious, if the plaintiffs have a right to vote for their representatives, they must have an election to do so.”

The judge ordered the governor to call the special elections by noon of Thursday of this week. Walker asked for a delay until April 6—as part of a plan to have the legislature intervene and rewrite the law regarding special elections.

The request for the delay was denied on Tuesday.

But the governor and his legislative allies are not giving up, and that has created a chaotic circumstance in Wisconsin.

Walker and Republican leaders in the legislature are still looking for ways to avoid following the existing law. On Tuesday, they announced a plan to rewrite state statutes so that governors would no longer be required to call special elections to fill legislative vacancies “as promptly as possible.” Under the Republican rewrite of the statutes that was unveiled Tuesday, legislative vacancies occurring after early December of odd-numbered years could be left unfilled until the regular November election of the following year.

This legally-dubious attempt to overturn a judge’s order by writing a new law would radically alter rules that have been in place for decades—and in some cases more than a century—for holding prompt special elections. Yet, Republican legislative leaders plan to call an extraordinary special session April 4 to pass the legislation, and Walker says he will sign it immediately. Then, if the special elections have been called by the governor in order to a contempt of court ruling, Walker allies suggest, the governor will then cancel them.

The rush to enact the new law was decried by state Representative David Bowen, a Milwaukee Democrat who has been a sharp critic of the governor’s anti-democratic tactics.

“Wisconsinites have seen first-hand the inability of this governor and legislature to respond to the needs of Wisconsinites. From Republicans voting unanimously against universal gun background checks, to taking the better part of a decade to finally listen to Democrats and close (a troubled youth prison), responsiveness to glaring issues is not something this governor and legislature are known for,” complained Bowen. “Yet, when the greatest fear Republicans have in 2018—the electorate—presented itself, it was with swift determination that the governor and Republicans faced the problem head on. A problem so big, they decided, that an extraordinary session of the legislature was justified to make sure these Wisconsin taxpayers don’t have a chance at the representation they deserve.”

It is not merely the rush to enact the measure, which will almost certainly be challenged in the courts, that is troubling. It is the governor’s determination to deny Wisconsinite’s representation, as Democratic legislators and public-interest groups have noted.

“The Republican-led efforts to prevent court-ordered special elections from being held is the height of corruption and the public should not accept this abuse of power,” argues state Senator Jennifer Shilling, the La Crosse Democrat who leads her party’s caucus in the legislature’s upper chamber.

Shilling is right. Walker and his allies would rather dismantle democracy in Wisconsin than respect the rule of law and the will of the people. Their position is as shocking as it is indefensible.