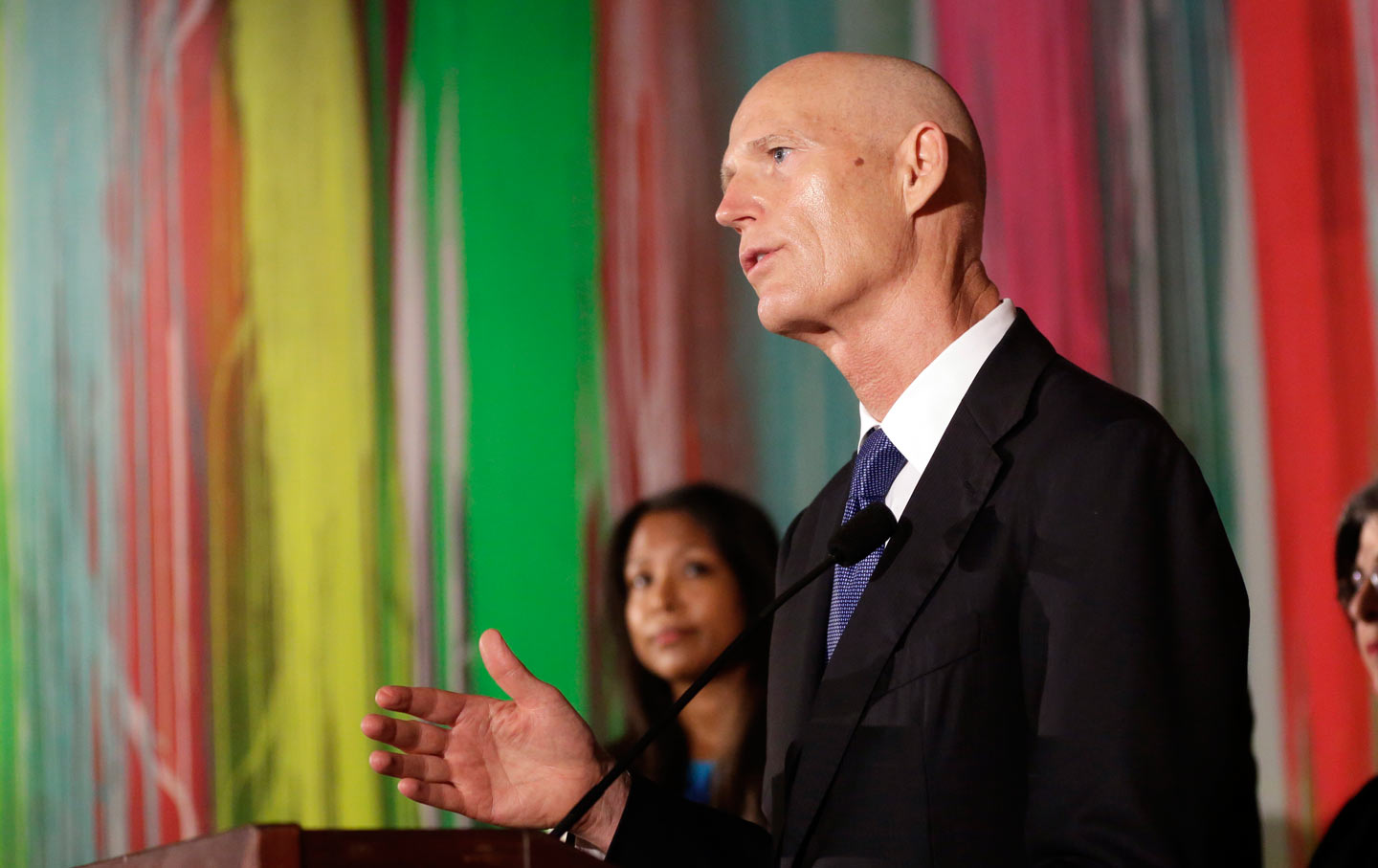 Florida Governor Rick Scott, a hyper-partisan Republican who has been one of Donald Trump’s most ardent supporters in this year’s presidential race, has a miserable record when it comes to respecting democracy in his critical swing state. And he is back at it this week—refusing requests to extend voter registration deadlines for Floridians whose lives are being disrupted by Hurricane Matthew.1

Despite requests for an extension of the Tuesday deadline, Scott announced Thursday night that “Everybody has had a lot of time to register. On top of that, we’ve got lots of opportunities to vote: Early voting, absentee voting and Election Day. So, I don’t intend to make any changes.”2

That’s an absurd claim, according to voter-registration groups and analysts of voting patterns in Florida.3

But perhaps not a shocking one coming from Scott.4

Specialists in Florida voting see a connection between surging registration and the refusal to extend the deadline.

The governor has a long history of playing politics with voting rights.5

Florida’s mangled 2012 election—in which early voting was cut back—saw Election Day lines so long that, according to an analysis done for the Orlando Sentinel they “may have turned away more than 200,000 frustrated would-be voters who gave up and went home before they cast ballots—or else saw the lines and elected not to join them.” And after the last presidential election, a three-judge panel of the US Court of Appeals for the 11th Circuit Court, in Atlanta, determined that Scott’s administration violated federal law by purging voter rolls too close to the election.6

With that record of embarrassments and rebukes, it would be reasonable to imagine that Governor Scott would stop playing political games with voting rights and elections.7

But this governor is not reasonable.8

In the face of a major storm that has battered his state, that has led to mass evacuations of coastal areas, that has seen widespread power outages and flooding and that could dislocate at least some potential voters for days, even weeks, Scott is saying no to simple requests from Democrats and voter-registration groups for an extension.9

It as not as if there is no interest in registration in Florida, a state that could well decide the race between Trump and Democrat Hillary Clinton.10

But there are still more voters to be registered, according to the Tampa Bay Times: “Elections supervisors typically see a surge in voter interest immediately before the registration closes. About 50,000 people registered during the final five days in 2012, according to University of Florida professor Daniel A. Smith, who studies Florida voting trends.”12

“Right at the end, people feel the urgency to do something,” Gihan Perera, who works with the group Florida New Majority, told the Miami Herald. Unfortunately, due to the hurricane, the group was forced to called off registration efforts at schools, churches and football games in the days leading up to the deadline.13

Scott showed no interest in working with officials to extend the voter registration window. Why?14

It is not as if Scott is a disinterested party. He chairs the Rebuilding America Now Super PAC, which has poured more than $14 million into television advertising in support of Republican presidential nominee Donald Trump in Florida, as well as other swing states such as North Carolina, Ohio, and Pennsylvania.15

“I think there’s a connection between what Rick Scott is doing and the numbers we see,” Smith said Thursday. “I don’t expect him to extend the voter-registration period because the tailed end of voter-registration drive tends to pick up those who are less politically engaged, who are younger and minority voters and that doesn’t bode well for the Republican Party.”16