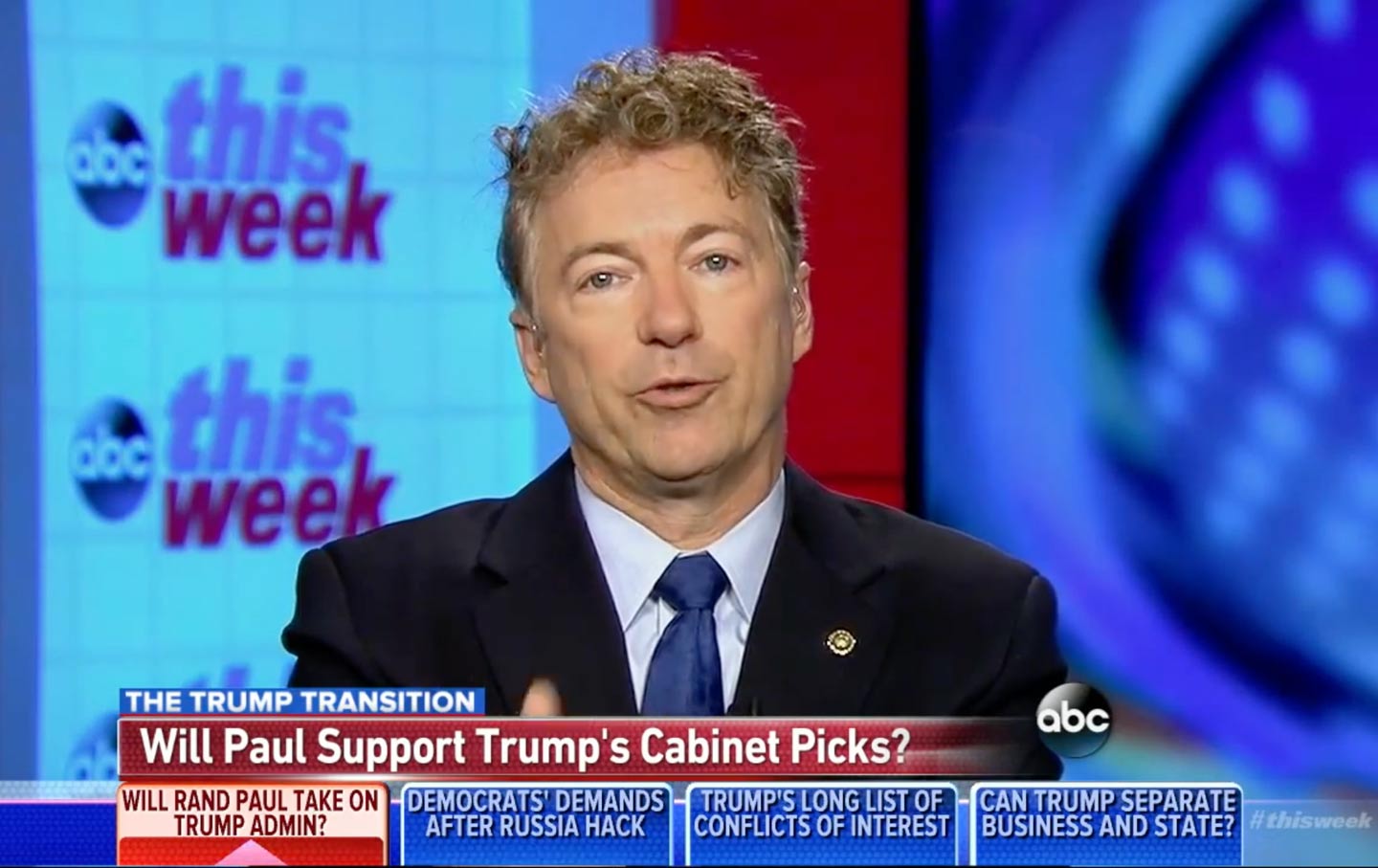 If Donald Trump nominates John Bolton or some other regime-change preaching hyper-hawk to a top State Department post, Kentucky Senator Rand Paul will have a word for the president-elect and his pick: “No.”

Asked on ABC’s This Week about how he would respond to Trump’s selection of the former ambassador to the United Nations to serve as the number-two authority in the State Department, the Republican member of the Senate Foreign Relations Committee declared himself to be “an automatic no on Bolton”—arguing that “he should get nowhere close to the State Department.”

The 2016 Republican presidential contender is unwilling to defer to the president-elect when it comes to nominations that could define how the United States responds to questions of war and peace.

“He should get nowhere close to the State Department.” —Rand Paul on hyper-hawk John Bolton

His hard-line stance is the necessary one. And it is more than just a rhetorical flourish or a simple point of principle. The Foreign Relations Committee is closely divided between Senate Republicans and Democrats—and if Paul aligns with Democrats in opposition to Trump picks, the balance could shift against a hawkish nominee.

That’s especially problematic for Bolton, who is considered a serious contender for nomination to serve as deputy secretary of state. Paul absolutely and explicitly rejects this possible Trump pick, saying, “I’ll do anything to try to prevent John Bolton from getting any position, because I think his world view is naive.” The senator explained: “John Bolton doesn’t get it. He still believes in regime change. He’s still a big cheerleader for the Iraq War.”

Paul’s critique extends beyond the potential Bolton nomination. The Kentuckian says he is “going to reserve judgment” on Rex Tillerson, the CEO of ExxonMobil, who is coming to be seen as Trump’s most likely pick for secretary of state. But Paul promised in the ABC interview that he would as a Foreign Relations Committee member press Tillerson on questions of war and peace, military adventurism, and regime change. “I’ll ask him the same question I’ve asked the others: Do you understand the historic lesson that the Iraq war was a failure, a strategic mistake?” the senator said.

“[To] me,” explained Paul, “the most important question is: Are you an advocate for the Iraq War? Do you think that was a good idea? Do you think regime change [is a good idea]? Because, see, these questions keep recurring.”

They do keep occurring, even though Trump campaigned as candidate who claimed to recognize the lessons of the Iraq imbroglio.

Rand Paul is right to keep asking tough questions about the regime-change fantasies that have proven to be so very dangerous and damaging. And he is right when he promises to oppose Trump nominees who do not answer them appropriately.