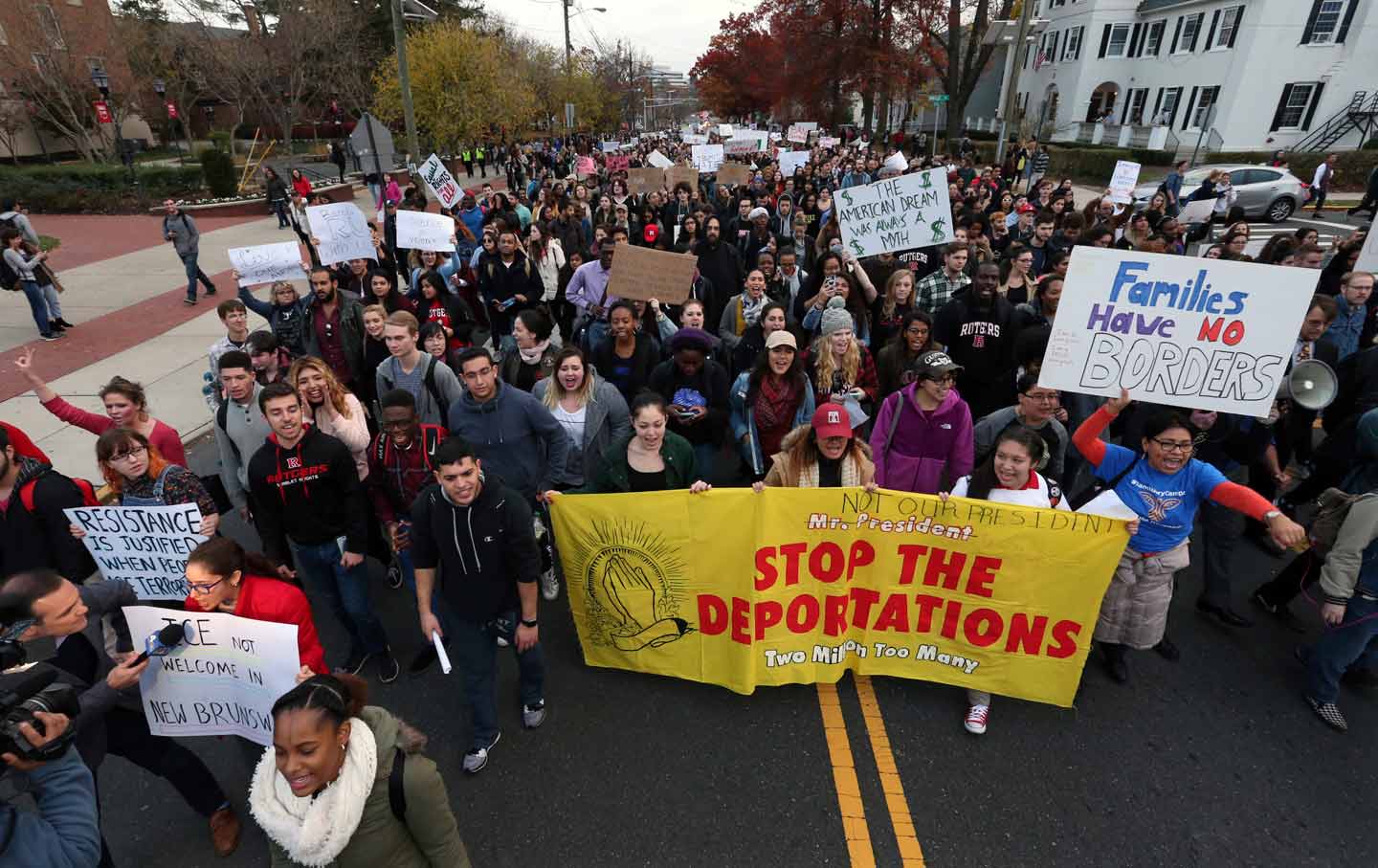 This May Day, people across the country will strike and take to the streets to protest the Trump administration’s attacks on immigrants and workers. Called “A Day Without Immigrants,” the strike and protests are being organized largely by immigrant and worker-led groups such as Cosecha and the Food Chain Workers Alliance.

Recently, students, staff, faculty, and administrators at universities across the United States have circulated a pledge to join in. “In the face of a climate of increasing bigotry and violence, we call on the university community to engage in a moratorium on business as usual and take action in solidarity with the immigrant worker strike on May Day.” The pledge is supported by, among others, Linda Martín Alcoff (CUNY), Cinzia Arruzza (The New School and International Women’s Strike), Judith Butler (UC Berkeley), Frances Fox Piven (CUNY), Nancy Fraser (New School for Social Research and IWS), Donna Haraway (UC Santa Cruz), Keeanga-Yamahtta Taylor (Princeton University and IWS), and Cornel West (Harvard University, Princeton University).

The Nation has partnered with the International Women’s Strike to promote the call to strike in universities on May Day. If you’re a student or work for a university, you can read and sign the pledge below.

We face a moment of great uncertainty. Elements of the social safety net and basic rights provisions are being rescinded and amended more swiftly than they can be challenged through traditional legal and legislative interventions. Millions of immigrants live under daily threat of separation from their families and communities by intensified ICE raids.

Many of the attacks we face directly affect the university. The arts, humanities, and sciences face not only funding cuts but an assault on the concept of free inquiry itself. Climate change data is being removed from the public domain, university budgets are being held hostage by state governments and the threat of political retaliation by the federal government, white supremacists have been emboldened to commit hate crimes on our campuses, and basic facts have diminishing import in the national debate.

May Day 2017 will be a day of struggle against the Trump administration and the structural conditions under which it originated. A day in which workers across the country, waged and unwaged, will strike, march, rally, boycott, and make our voices heard against the sexism, racism, xenophobia, and homophobia of this administration and against the global system of production that makes it possible. This charge will be led by immigrant workers, hundreds of thousands of whom have already pledged to strike, with several hundreds of thousands more expected, in what could be one of the largest strikes in US history.

We call on the academic community to live up to the promise of higher learning by halting business as usual on May Day as an act of solidarity. While the nation’s workforce pauses to engage in a day of action, universities must pause as well; for staff, adjuncts and student workers on our campuses know well the severity of neoliberal policies and the precarization of work conditions, while students are already facing the terror of ICE raids.

We call on universities nationwide to engage in a moratorium on university operations this May Day so that students, staff, and faculty—domestic and international, documented and undocumented—can engage in a day of demonstrations and teach-ins in solidarity with A Day Without Immigrants. We call on university administrators and faculty to cancel classes, close offices, and postpone maintenance to demonstrate our solidarity with immigrant workers and our support for thoughtful strategies of resistance.

As administrators, we pledge to place a moratorium on all normal university operations to allow faculty, staff, and students to participate in this momentous day of civic engagement, with pay and without retaliation.

As faculty, we pledge to hold teach-ins or join our students participating in protests in lieu of regular coursework

As staff, we pledge not to work and to afford our student workers the same opportunity.

As students, we pledge to attend teach-ins, demonstrations, and marches instead of classes.

And as members of the university community as a whole, we pledge to take action to defend all those who face retaliation for their participation in the moratorium and other May Day strike actions.