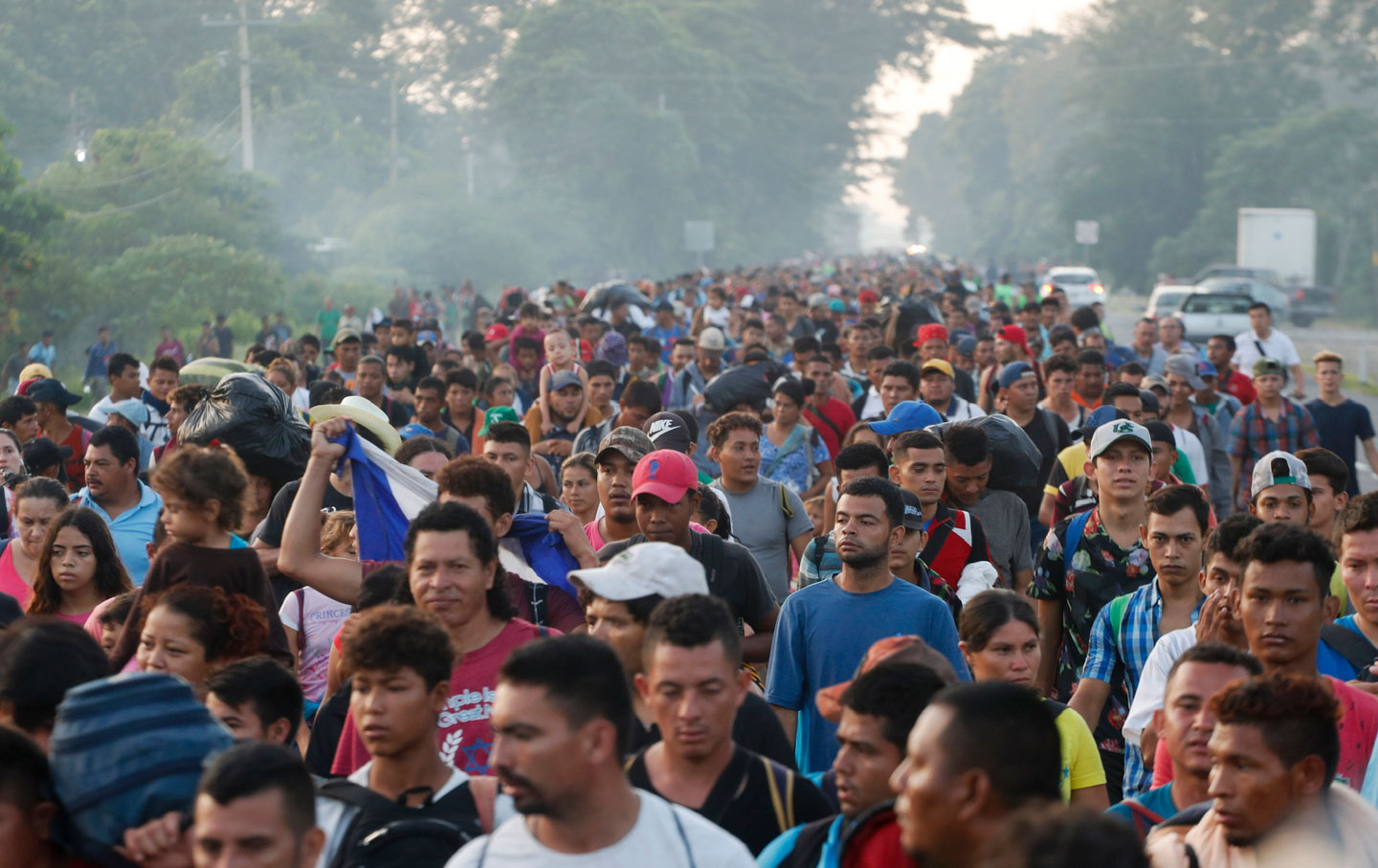 The number keeps rising: first 1,000, then the Pentagon officially deploying 5,200, now Trump threatening to send as many as 15,000 US troops to the US-Mexico border—all to confront a caravan of desperate, impoverished, and nonviolent migrants from Central America. If Trump gets his way, the number of US soldiers sent to our southern border to defend against this imagined threat will surpass the amount of troops involved in the initial invasion of Afghanistan in March of 2002.

Though both the George W. Bush and Barack Obama administrations deployed significant National Guard troops to the southern border, Trump’s move is far more worrisome. This measure is not only a direct attack against the peoples of Honduras, Guatemala, and El Salvador escaping violent turmoil wrought by US meddling in their countries’ affairs. It also sets a dangerous precedent for our country: With this domestic deployment, named “Operation Faithful Patriot,” the Trump administration hopes to normalize the use of military force on US soil.

Two antiwar veterans—Rory Fanning, a former resister and author of Worth Fighting For: An Army Ranger’s Journey Out of the Military and Across America, and Spenser Rapone, who was kicked out of the military for posting a photo of himself at his West Point graduation ceremony with an anti-war sign under his hat—issued this statement calling on US soldiers to defy the order of their commander in chief if they are called to the Southern border.

To All Active Duty Soldiers:

Your Commander-in-chief is lying to you. You should refuse his orders to deploy to the southern US border should you be called to do so. Despite what Trump and his administration are saying, the migrants moving North towards the US are not a threat. These small numbers of people are escaping intense violence. In fact, much of the reason these men and women—with families just like yours and ours—are fleeing their homes is because of the US meddling in their country’s elections. Look no further than Honduras, where the Obama administration supported the overthrow of a democratically elected president who was then replaced by a repressive dictator.

These extremely poor and vulnerable people are desperate for peace. Who among us would walk a thousand miles with only the clothes on our back without great cause? The odds are good that your parents, grandparents, great-grandparents, etc. lived similar experiences to these migrants. Unless your ancestors are native to this land or were brought here on slave ships, your family members came to the US to seek a better life—some fled violence. Consider this as you are asked to confront these unarmed men, women and children from Honduras, Guatemala, and El Salvador. To do so would be the ultimate hypocrisy.

The US is the richest country in the world, in part because it has exploited countries in Latin America for decades. If you treat people from these countries like criminals, as Trump hopes you will, you only contribute to the legacy of pillage and plunder beneath our southern border. We need to confront this history together, we need to confront the reality of America’s wealth and both share and give it back with these people. Above all else, we cannot turn them away at our door. They will die if we do.

By every moral or ethical standard it is your duty to refuse orders to “defend” the US from these migrants. History will look kindly upon you if you do. There are tens of thousands of us who will support your decision to lay your weapons down. You are better than your Commander-in-chief. Our only advice is to resist in groups. Organize with your fellow soldiers. Do not go this alone. It is much harder to punish the many than the few.