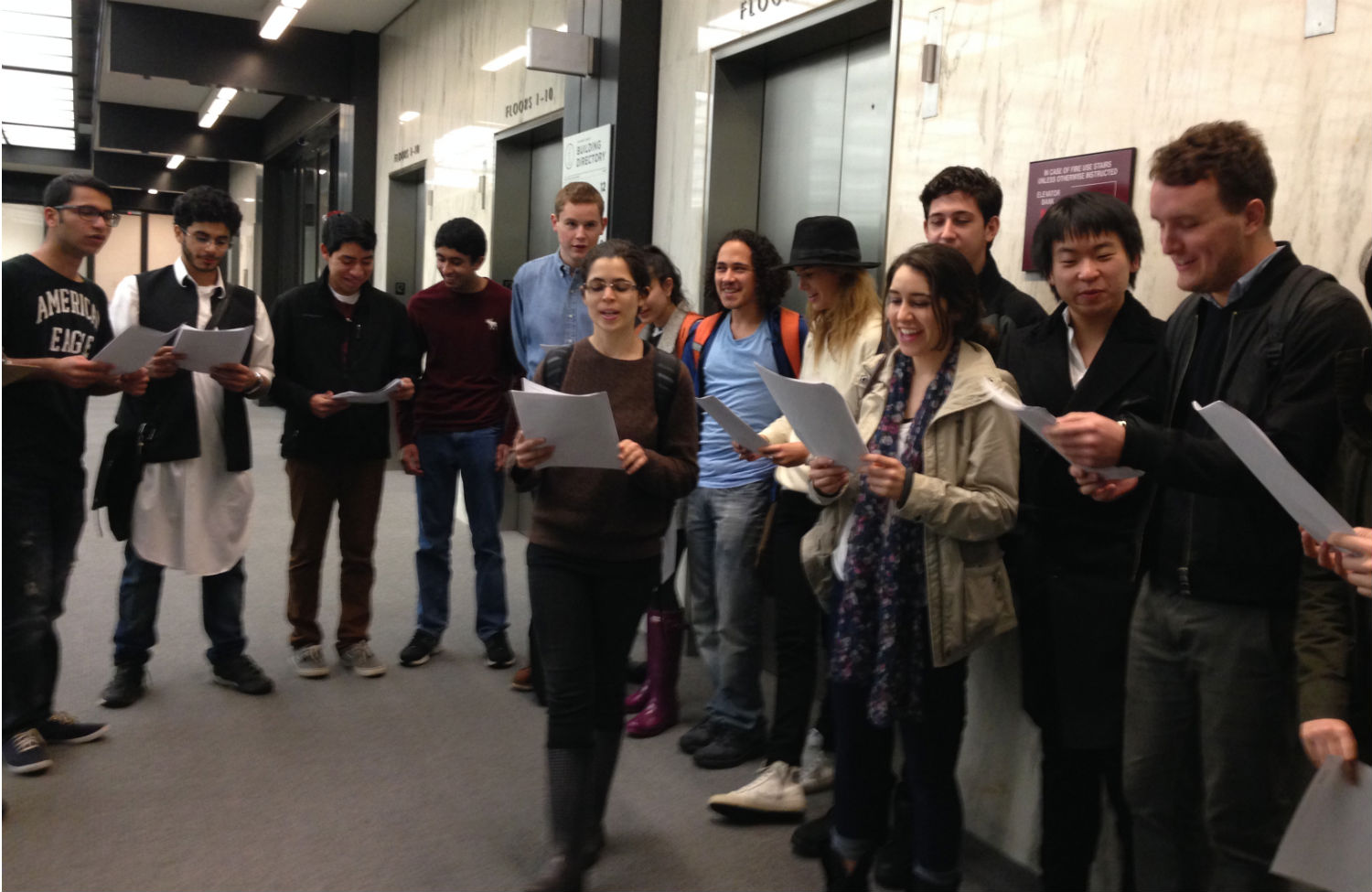 This article was originally pubished in the student-run NYU Local.

Members of the NYU Student Labor Action Movement gathered on the 12th floor of Bobst Library on Friday December 6 to sing carols about workers’ rights. Likewise, they delivered a letter to John Sexton urging implementation of an updated code of conduct to protect the rights of workers in unsafe factories in Bangladesh that produce NYU apparel. The University Senate unanimously passed a resolution yesterday submitted by SLAM, specifically requiring NYU’s licensees to sign the Accord on Fire and Building Safety in Bangladesh across the 28 factories that produce NYU apparel in the country. Only one licensee, Adidas, has signed the accord to date.

In the letter that SLAM members left with Sexton’s office today, the student activists cite the Rana Plaza disaster in April, where 1,132 workers died in a factory collapse, as well as the more recent Aswad textile factory fire in October. “While garment factory workers are fighting for their lives, our university, as a consumer of these products, has a moral obligation to ensure that those who produce our collegiate apparel can do so in a safe environment, without fear of dying at the workplace,” the letter said.

For today’s event, part of SLAM’s ongoing End Deathtraps campaign, the carolers rewrote popular Christmas tunes. To the tune of “Jingle Bells,” students sang: “N-Y-U, N-Y-U, safety is a right / Oh what fun it is to stand with workers in their fight!” They also presented “Joy to the Workers” and “Workers’ Rights Are Coming To Town” before finishing with “Twelve Days of Workers’ Rights.” (“On the first day of Christmas, John Sexton gave to me workers’ rights solidarity!”)

Robert Ascherman, a sophomore in the Gallatin program and one of SLAM’s carol writers, celebrated the University Senate’s decision. “We’re really excited that NYU is finally standing up for workers’ rights,” Ascherman said, but the campaign to establish workers’ rights is not yet complete. “All decisions at NYU go through John Sexton himself. The [Senate's] decision was really just an advising decision on updating the code of conduct, so we went caroling to encourage him to do what’s right.”

SLAM had also previously discussed the recommendation with university senators, faced off against Sexton at this semester’s town halls, held a “die-in” at the University Senate, and written to Sexton about the issues at stake.

“It’s one thing to update our code of conduct,” Ascherman said. “What’s really going to be a test of NYU’s morality is whether or not it boycotts these companies. We’ll continue to fight this campaign through to the end.”