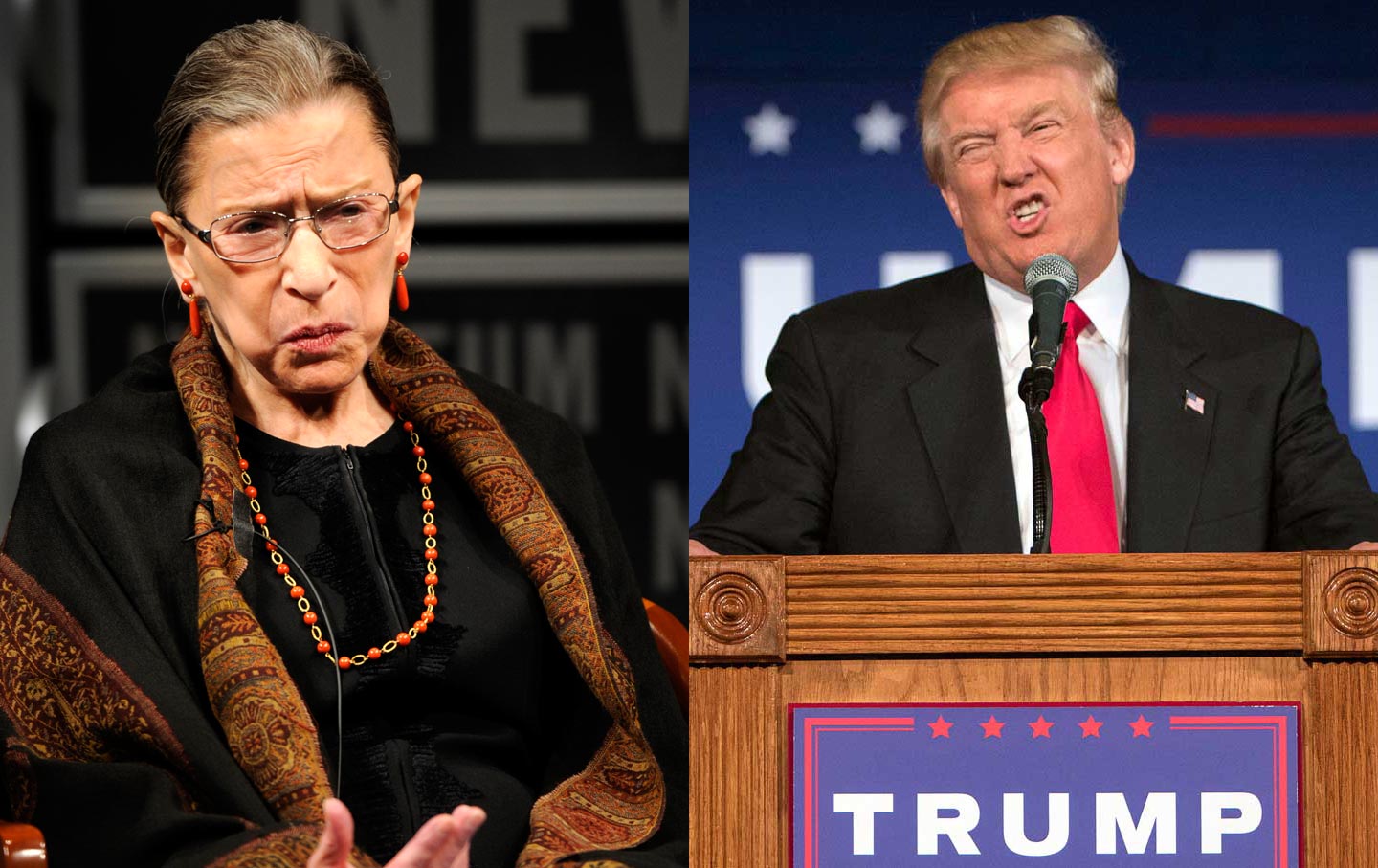 “He is a faker,” the veteran jurist says of the presumptive Republican presidential nominee. “He has no consistency about him. He says whatever comes into his head at the moment. He really has an ego.”

Would anyone who has paid the most minimal attention to Trump’s long history of changing positions, would anyone who has merely tried to keep track of Trump’s positions during the course of his 2016 presidential run, disagree with that assessment? Certainly, his Republican primary opponents did not disagree. Their criticisms of the billionaire businessman were far more pointed. So, too, has been the criticism from conservative Republicans who, even now, hope to derail the candidacy of a reality-TV “star” whom Republican Senator Lindsey Graham refers to as “a loser as a person and a candidate.”

“He has no consistency about him. He says whatever comes into his head at the moment.” —Justice Ginsburg

For purposes of clarification, Graham has also referred to Trump as a “nut job” who is “ill-suited” for the presidency.

Justice Ginsburg also asked a question about Trump during a thoughtful conversation with a respected legal analyst: “How has [Trump] gotten away with not turning over his tax returns?” That’s something top Republicans have wondered aloud about. Indeed, the party’s immediate former nominee for president, Mitt Romney, says the 2016 Republican contender’s refusal to release his returns is “disqualifying.” “There is only one logical explanation for Mr. Trump’s refusal to release his returns: There is a bombshell in them,” argues Romney. “Given Mr. Trump’s equanimity with other flaws in his history, we can only assume it’s a bombshell of unusual size.”

Justice Ginsburg made an observation regarding media coverage of the debate about Trump’s tax returns: “The press seems to be very gentle with him on that.” That’s hardly a radical line, as members of the media have joined partisans and ideologues on all sides in suggesting that Trump has too frequently gotten a free pass from the press. There is a reasonable level of consensus around the parallel notions that, as an NPR assessment recently noted,“The media greatly enabled Trump, embracing the spectacle to give him vast swaths of real estate on air, online and in print” and, “Most egregiously, the media did not subject Trump’s record to the kind of scrutiny other major candidates should receive.”

Justice Ginsburg said in another interview, “I can’t imagine what this place would be—I can’t imagine what the country would be—with Donald Trump as our president,” she said. “For the country, it could be four years. For the court, it could be—I don’t even want to contemplate that.” A radical assessment? Hardly. Even House Speaker Paul Ryan, who will chair the convention that nominates Trump, has said the candidate’s attacks on judges and the judiciary are “indefensible” statements that “should be absolutely disavowed.”

So Justice Ginsburg has made several statements of fact and opinion that fit very much into the mainstream of contemporary discourse. It would be a stretch to suggest that anything she has said is as controversial as what Ginsburg’s close friend the late Justice Antonin Scalia said in reply to a 2012 question about why he would compare laws banning homosexuality to laws against murder: “If we cannot have moral feelings against homosexuality, can we have it against murder? Can we have it against other things?”

It would also be a stretch to suggest that there is anything new about justices addressing controversial issues. There is plenty of history of jurists speaking up, and there is a good deal of history that tells us justices can comment on current events and still apply the law fairly and responsibly.

Yet Trump has tweeted, with his usual reserve: “Justice Ginsburg of the U.S. Supreme Court has embarrassed all by making very dumb political statements about me. Her mind is shot—resign!” And Ginsburg is taking hits from Republican partisans, from Democrats, and from the so-called “liberal media.”

It is common to call for restraint on the part of jurists. Many reasonable observers will argue, as does The New York Times, that justices should “remain outside the presidential process.”

“There is no legal requirement that Supreme Court justices refrain from commenting on a presidential campaign,” read a Times editorial published Wednesday. “But Justice Ginsburg’s comments show why their tradition has been to keep silent.”

The Times argues that “Washington is more than partisan enough without the spectacle of a Supreme Court justice flinging herself into the mosh pit.”

But Justice Ginsburg is not in the mosh pit. The justice has a reputation for speaking her mind, and she at times does so bluntly—although certainly no more bluntly than a good many other jurists.

With regard to Donald Trump, Justice Ginsburg has referenced some facts and expressed some opinions. Her opinions are no more radical than those of sober media analysts, prominent Republicans, and conservative thinkers—some of whom are actually backing Trump. Her statements do not in any way match Trump’s bombast.

Justice Ginsburg’s mind is not shot, as Donald Trump suggests.

And it is absolutely absurd for Trump and his allies to argue that Justice Ginsburg has said or done anything that might call for her resignation.