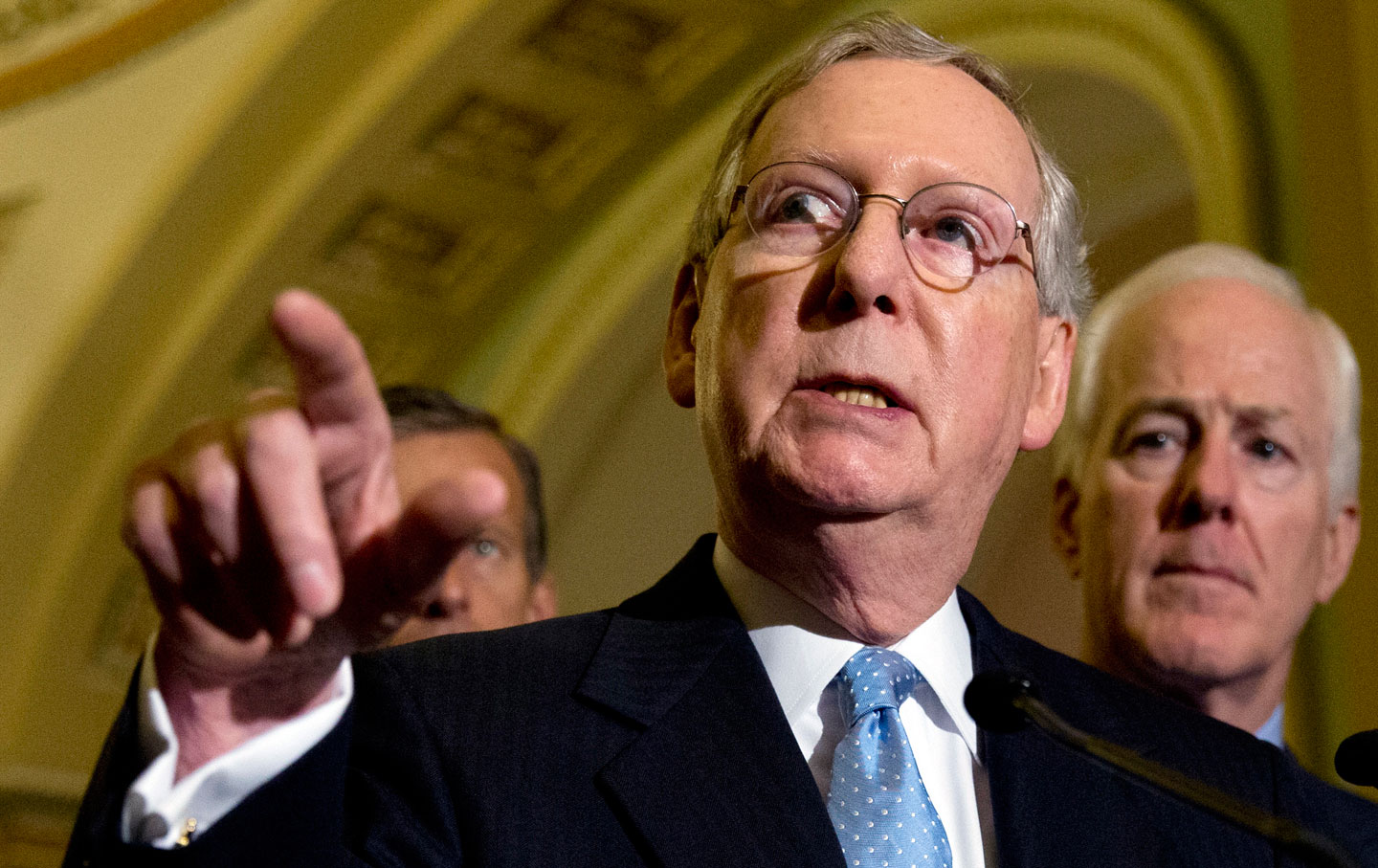 Thus did McConnell seem to unilaterally rewrite the Constitution to strip a year from the president’s final term. All 43 presidents before him had four-year terms (unless they died in office or resigned, of course), but when it comes to arguably the president’s most important job, McConnell would limit Obama to three years.

“The American people should have a voice in the selection of their next Supreme Court Justice,” McConnell said in a statement Saturday evening. “Therefore, this vacancy should not be filled until we have a new President.” Note to McConnell: A majority of the American people elected Barack Obama, twice. He is the first Democratic president to get more than 50 percent of the popular vote, twice, since Franklin Delano Roosevelt. It is in fact our right to have a voice in the selection of a justice. Obama is our voice.

Even worse, so far mainstream journalists have mostly shrugged at McConnell’s declaration, as though it’s to be expected, just partisan politics as usual. Just because it hardly seems unusual, given DC polarization, that doesn’t make it normal. It’s outrageous.

Of course, on one level Scalia would likely be proud of McConnell for digging his heels in so far to the right, so quickly. Scalia was an old-school culture warrior on the High Court, and he played a major role in pulling SCOTUS, and the country, to the right. His most important legacy will remain his decision he wrote on behalf of the Court’s five conservatives to stop the Florida recount and make George W. Bush president in 2000. He used the 14th Amendment, which made citizens of former slaves, to disenfranchise Florida’s black voters, who were four times more likely to have their votes discarded than whites. In fact, Scalia argued that “equal protection” required him to protect Bush from democracy. “The counting of votes that are of questionable legality does in my view threaten irreparable harm to [Bush], and to the country, by casting a cloud upon what he claims to be the legitimacy of his election,” Scalia wrote, disastrously. (He later derided the Voting Rights Act as a “racial entitlement.”)

So maybe it’s less a defilement of Scalia’s originalism than a tribute to the departed justice that McConnell wants to shorten the term of our first black president by denying him the right to nominate Scalia’s replacement. Of course, the GOP presidential contenders agree with him. Senator Ted Cruz claimed at Saturday night’s debate that there hasn’t been an election-year SCOTUS appointment in 80 years. When moderator John Dickerson reminded him that Justice Anthony Kennedy, the nominee of lame-duck President Ronald Reagan, was confirmed in 1988, the GOP crowd actually booed him. He apologized for delivering the “facts,” and the crowd jeered at his apology as well as his facts. (In fact, 17 Supreme Court justices have been confirmed during presidential election years, according to Igor Volsky of ThinkProgress.)

We can expect the GOP primary electorate to boo the facts. I hope the media don’t go along. The president has 11 months left in his last term, which is, as he said, plenty of time to nominate and get confirmed a new justice. It will be tough getting anyone confirmed, given the fact that the right flank of the GOP Senate majority plays politics in a tougher way than the mainstream, but for McConnell to block a hearing and vote would take GOP obstruction to a new level.

McConnell used to be part of the mainstream. He promised, when he took over as majority leader, that he would run the Senate in a way that showed that Republicans can “govern.” Part of governing is accepting the president’s right and responsibility to quickly fill Court vacancies and scheduling confirmation hearings promptly.

McConnell used to know that. In 2005, when some Democratic senators were threatening to filibuster Bush’s Supreme Court nominee, McConnell thundered: “The Constitution of the United States is at stake. Article II, Section 2 clearly provides that the President, and the President alone, nominates judges. The Senate is empowered to give advice and consent.… [T]he Republican conference intends to restore the principle that, regardless of party, any President’s judicial nominees, after full debate, deserve a simple up-or-down vote. I know that some of our colleagues wish that restoration of this principle were not required. But it is a measured step that my friends on the other side of the aisle have unfortunately made necessary. For the first time in 214 years, they have changed the Senate’s ‘advise and consent’ responsibilities to ‘advise and obstruct.’”

Of course, it’s Republicans who have taken obstructionism to new levels under Obama. McConnell may be shameless, but he should be shamed over this latest maneuver.