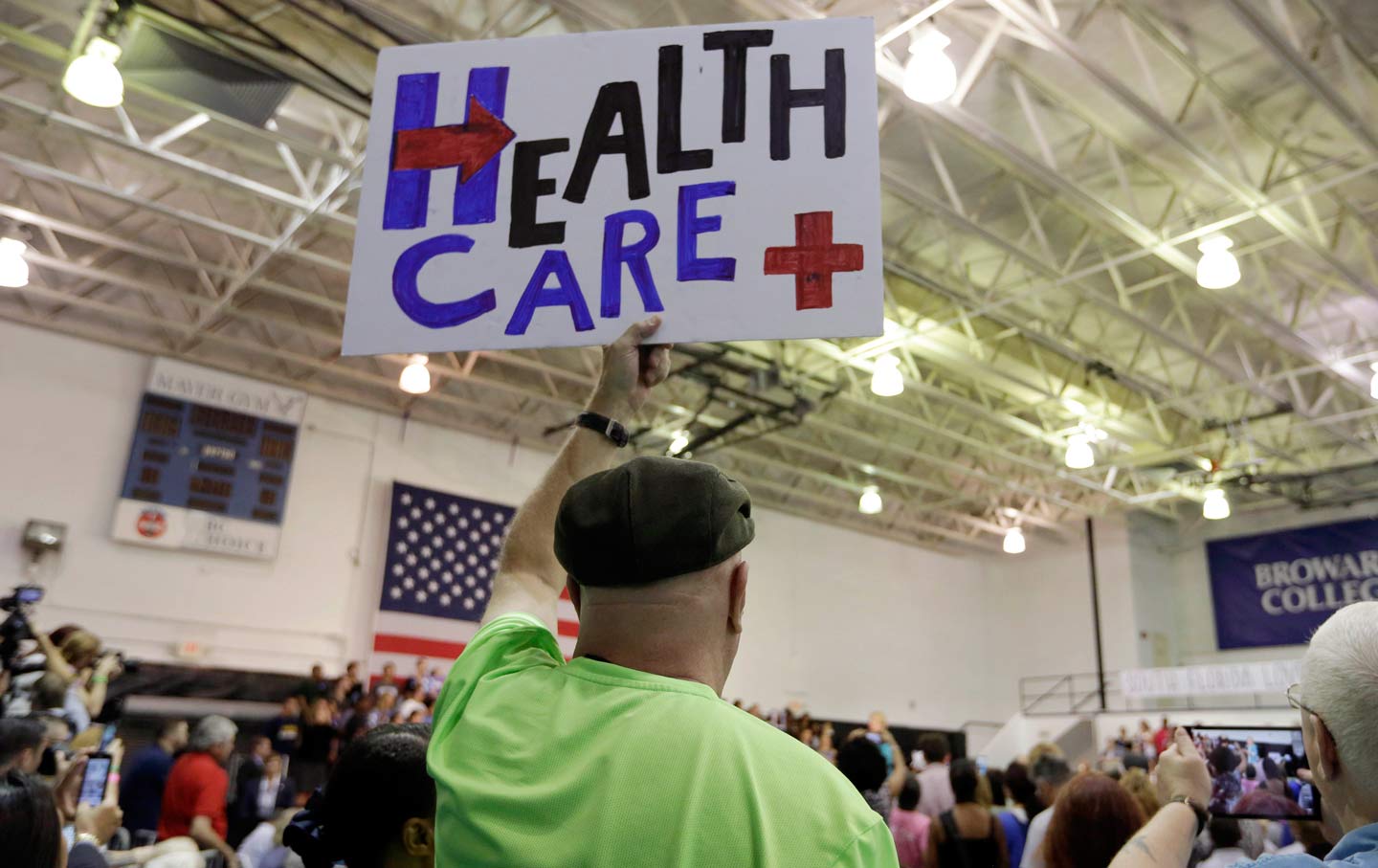 The platform of the Democratic Party declared 40 years ago that Democrats favored “the orderly and progressive development of a comprehensive national health insurance program which is federally financed.”

The case that Democrats made for “a comprehensive national health insurance system with universal and mandatory coverage” that would be paid for with tax revenues was not radical—or new. Almost three decades earlier, the Democratic platform of 1948 announced that “We favor the enactment of a national health program” and Harry Truman argued on the campaign trail for health care as a human right. “I put it to you, it is un-American to visit the sick, aid the afflicted or comfort the dying?” the president said. “I thought that was simple Christianity.”

The Democratic Party has placed more and less emphasis on health-care reform over the years. But it has generally accepted a premise outlined in its 1976 platform: “We must achieve all that is practical while we strive for what is ideal, taking intelligent steps to make adequate health services a right for all our people.”

The party has made practical progress, especially with the Affordable Care Act that was approved with overwhelming support from Democrats in the House and the Senate and the approval of President Obama. Grassroots Democrats have taken pride in this accomplishment. But they have not been satisfied that the work of making “adequate health services a right for all our people” has been completed.

“Every American deserves the choice of a public option in health insurance.” —Bernie Sanders

During the 2016 Democratic primary season, millions of them embraced the call by Vermont Senator Bernie Sanders for a single-payer “Medicare for All” health-care system that would absolutely guarantee affordable, high-quality health care as a right. Hillary Clinton did not move to embrace the position, as at times she and her backers criticized Sanders for pushing too hard on the issue. But as the primary season progressed, the party’s eventual nominee was talking more and more about bold steps. In May, Clinton was telling voters that she would seek as president to develop a robust “public option” that would allow Americans in their 50s to buy into Medicare—rather than buying overpriced insurance on the private “market.”

In July, Clinton’s campaign announced that “Hillary will pursue efforts to give Americans in every state in the country the choice of a public-option insurance plan, and to expand Medicare by allowing people 55 years or older to opt in while protecting the traditional Medicare program.”

President Obama echoed this thinking in a July article for The Journal of the American Medical Association, and the 2016 Democratic Party platform advances the agenda—promising to “guarantee health care as a fundamental right for every America” and proposing that: “As part of that guarantee, Americans should be able to access public coverage through a public option, and those over 55 should be able to opt in to Medicare.”

The renewal and amplification of the Democratic commitment to a public option—which was stripped from the Affordable Care Act in the scramble to get the votes needed to pass the measure—is one of the major political developments of 2016. And now the proposal has picked up significant support in the US Senate, where Oregon Senator Jeff Merkley is leading a group of almost three dozen senators who have announced support for a public option. That group includes Sanders and Massachusetts Senator Elizabeth Warren, as well as top Senate Democrats such as New York’s Charles Schumer, Patty Murray of Washington, and Dick Durbin of Illinois.

“The Affordable Care Act has already expanded health coverage to millions who were previously uninsured and given countless Americans greater peace of mind,” says Merkley. “We should build on this success by driving competition and holding insurance companies accountable with a public, Medicare-like option available to every American.”

Support for that position is strong and a coalition of groups that includes the AFL-CIO, the Progressive Change Campaign Committee, Presente.org, UltraViolet, Working Families Party, MoveOn.org, Democracy for America and Daily Kos. “We see this as the most significant health care push by Democrats since the passage of Obamacare. This resolution supporting a public option for every American represents a Democratic Party increasingly unified behind a strategy of playing offense on big progressive ideas,” says PCCC co-founder Stephanie Taylor, who noted that the insurance company Aetna’s decision to pull out of 11 states has created “new urgency for making a public option available to every American.”

PCCC has launched a “We Want The Public Option!” petition drive that declares: “Aetna attacked the public. We’re attacking back.”

Bernie Sanders says the time is right for this fight. “The Affordable Care Act has made great progress in helping millions of people get access to health insurance. But, at a time, when 29 million people are still uninsured, and 31 million are under-insured, we must continue to make needed health care reforms so that the American people can have health care as a right, not a privilege,” argues the senator. “Insurance companies have shown they are more concerned with serving their shareholders than their customers. Every American deserves the choice of a public option in health insurance.”

Sanders is right. The public option should be central focus of the 2016 campaign.