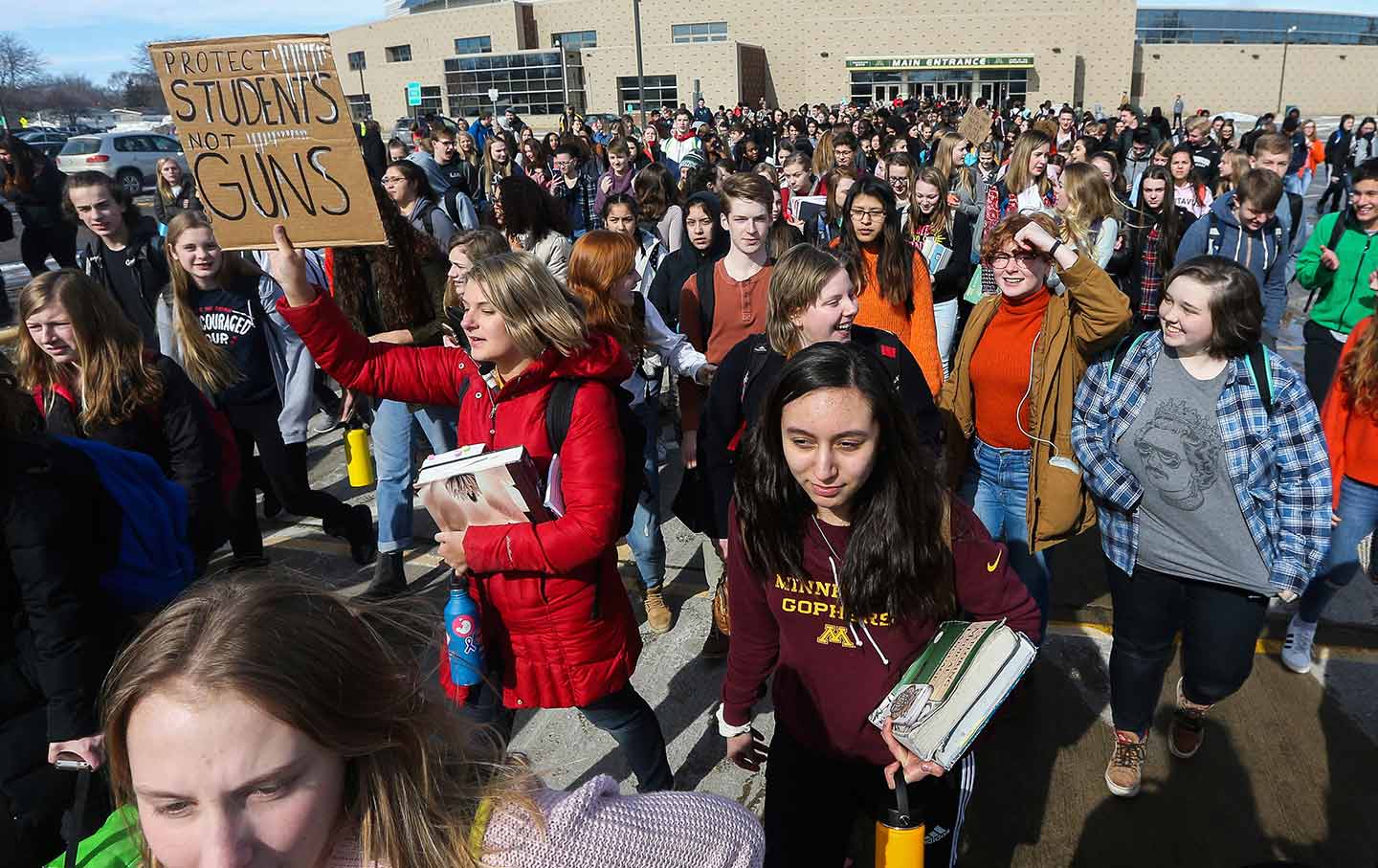 When Cameron Kasky, a survivor of the gun violence that left 17 dead at Marjory Stoneman Douglas High School, confronted Florida Senator Marco Rubio, a Republican whose long political career has been bought and paid for by the NRA, at a CNN town-hall meeting, several things became clear. Kasky and the other students who have stepped up to demand action know what they are talking about. These students are on to the games politicians play in order to avoid being pinned down on gun-violence issues, and as such are prepared to counter the double talk of political careerists like Rubio.

A growing number of young people fully recognize the deference to the NRA that characterizes the response of politicians like Rubio to to mass shootings. That recognition underpinned the robust challenge that Kasky posed to the senator when he asked, “In the name of 17 people, you cannot ask the NRA to keep their money out of your campaign?”

The senator responded, “I will always accept the help of anyone who agrees with my agenda.” Kasky left with his dignity; Rubio did not. It was a powerful moment, but there are limits on what Cameron Kasky and smart, engaged young people like him can do to hold elected officials such as Rubio to account. At age 17, Kasky cannot vote this year.

The school shootings in Parkland, Florida, have produced plenty of political repercussions—some of which could change the debate about gun violence in America. But the powerful impact that high-school juniors and seniors are having on that debate has raised another question: Shouldn’t these young people be allowed to cast ballots.

The answer is yes.

Lower the voting age to 16 because, as Richard Branson says, young people are often “on the right side of history.”

Noting that high-school students have “far better BS detectors” than adults, constitutional scholar Lawrence Tribe asked as the young people from Florida opened up the gun debate,“Wouldn’t it be great if the voting age were lowered to 16?”

It would be great. And it ought to be on the agenda of progressives going forward.

There’s nothing radical about extending the franchise to people aged 16 to 18. Argentina, Austria, Brazil, Cuba, Ecuador and Nicaragua allow voting at 16, as did Scotland during its historic 2014 independence election.

So, too, do the German states of Brandenburg, Bremen, and Hamburg; the Swiss canton of Glarus; and the semi-autonomous UK semi-autonomous territories of the Isle of Man, Jersey, and Guernsey. British billionaire Richard Branson began arguing after Britain’s 2016 #Brexit vote (which younger voters overwhelmingly opposed) for lowering the voting age to 16, because young people are more “interested, motivated and informed” than ever before, and often “on the right side of history.”

In the United States, where it has been argued that a lower voting age might well have influenced the results of primary contests for the 2016 Democratic presidential nomination and fall voting for the presidency itself, the movement to lower the voting age to 16 has taken off in recent years. Berkeley gave 70 percent support to a youth-voting initiative in November 2016, and other communities have already proven that the idea can work. In 2013, Takoma Park, Maryland, became the first municipality in the United States to extend voting rights to 16- and 17-year-olds—for local elections—and Hyattsville, Maryland, followed suit in 2015. The city council of another Maryland community, Greenbelt, just voted unanimously to approve a charter amendment to officially allow 16- and 17-year-olds to vote in their local elections.

A national initiative, Vote16USA, which has been organized by Generation Citizen, is backing local efforts and encouraging political leaders to get on board. And it’s happening.

In Illinois this week, Chicago high-school student Cecilia Ruiz asked Democratic gubernatorial candidate Chris Kennedy whether he would support a voting age of 16.

“You can’t do any worse for the country than what older people did when they elected Donald Trump.… I don’t see any reason why not to,” said Kennedy, who concluded his response by saying, “Yes.”

“Empirical evidence suggests that the earlier in life a voter casts their first ballot, the more likely they are to develop voting as a habit,” explains FairVote. “While one’s first reaction might be to question the ability of young voters to cast a meaningful vote, research shows that 16- and 17-year-olds are as informed and engaged in political issues as older voters. It is time that they are empowered to put that knowledge to good use at the polls, and make voting a habit in their formative years. These young citizens are old enough to drive, work without restrictions on their hours, and pay taxes—they should also have a voice in their local government.”

The only place where reformers might quibble with FairVote is on that last line. Yes, young citizens should have a voice in their local government. But, as the Florida debate over gun violence illustrates, young people are more than ready to make their voices heard with regard to state and federal policy. They should have their votes counted, as well.

Expanding voting rights requires a big change—it took a 1971 constitutional amendment to lower the voting age from 21 to 18—but the case for votes at 16 has been made. It’s time.